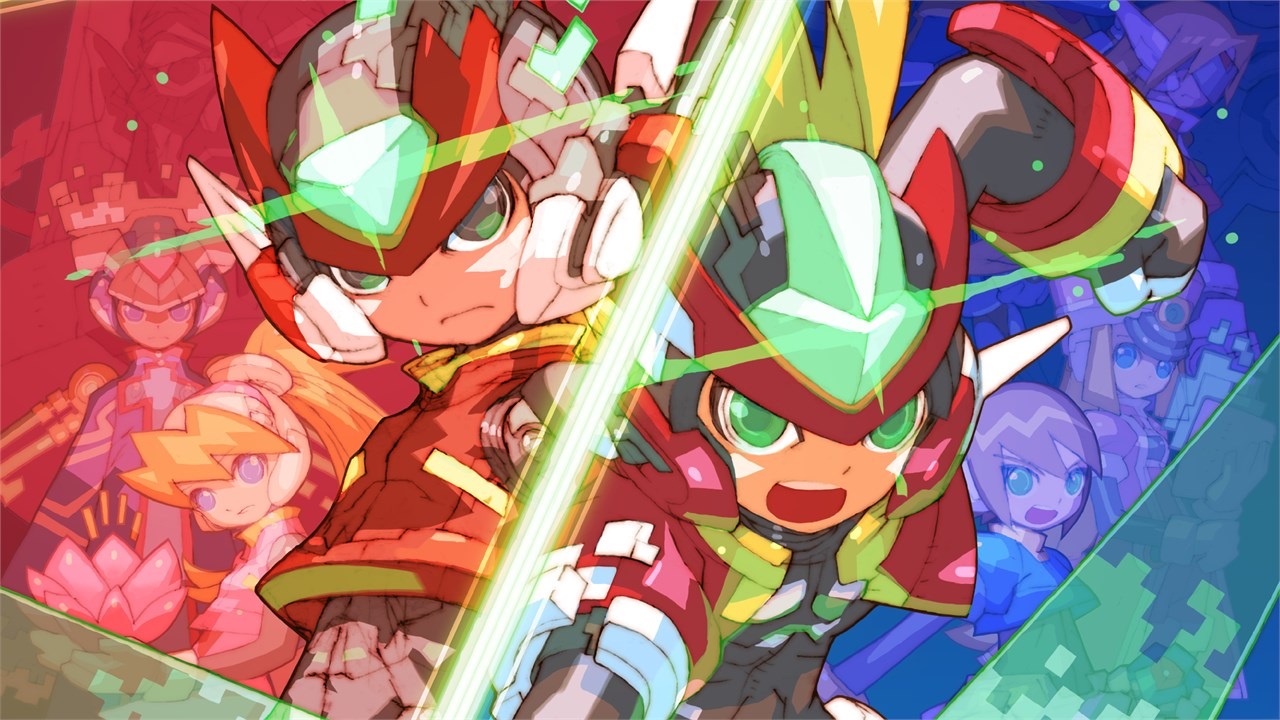 Mega Man remains one of the longest lasting game franchises around, with the main series also spawning a number of different spinoffs over the years. While Mega Man X is easily the most well known of these, the Mega Man Zero and ZX series somewhat slid under the radar as handheld exclusives across the Game Boy Advance and Nintendo DS. Following up on the compilations for Mega Man and Mega Man X, Capcom has now moved onto a couple lesser appreciated series with the Mega Man Zero/ZX Legacy Collection.

The Mega Man Zero series made its debut on the Game Boy Advance and saw subsequent releases in each of the next three years. Rather than taking place around the same time as the X series with side adventures about Zero, Mega Man Zero takes place 100 years after the events of the X storyline with Zero being reawakened by a new character named Ciel when the utopia of New Arcadia comes under attack. To make matters worse, some form of X appears to be in charge of these enemy forces as well. 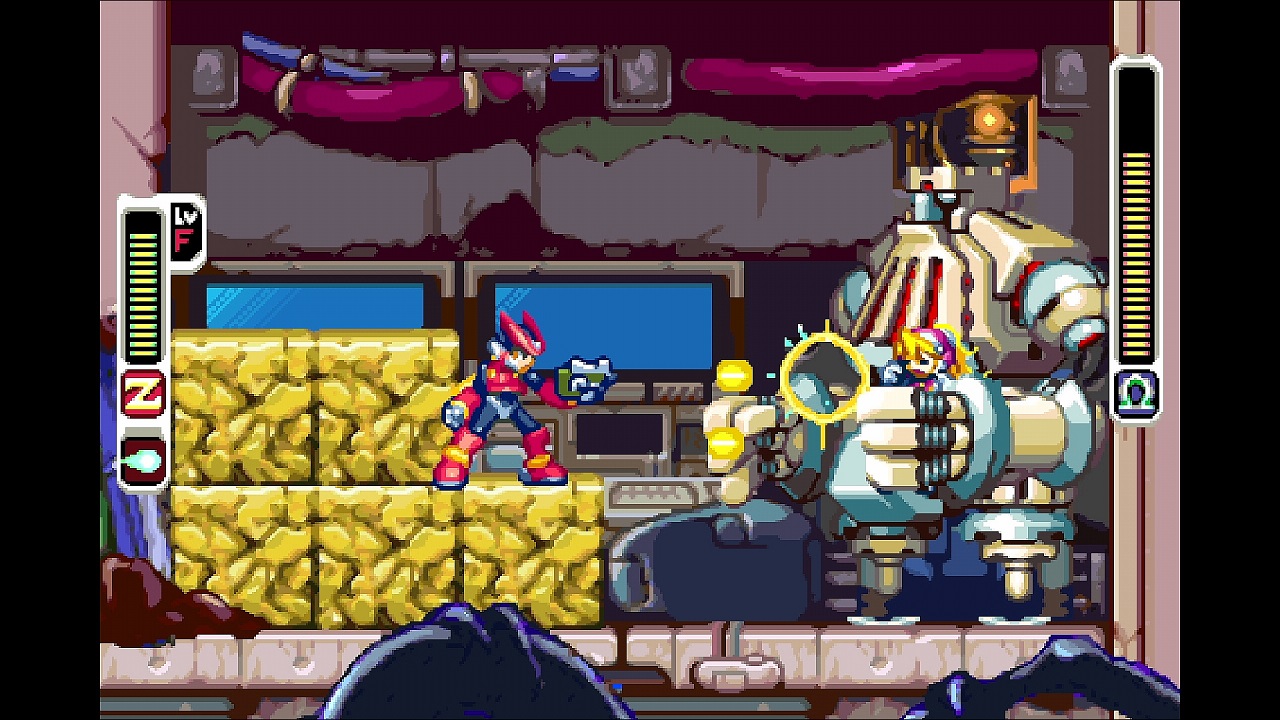 Mega Man Zero initially released between Mega Man X6 and X7, with the gameplay being a mix of old and new. While Zero is best known for his Z-Saber, the Mega Man Zero series introduces a few different weapons for the character. In fact, the first game starts off with Zero only having a Buster Shot, which is essentially like Mega Man’s own. He soon receives his Z-Saber, as well as the option to acquire additional weapons from the weapon creator in the game, which include the Triple Rod and Shield Boomerang. The follow-up games also add other weapons into the move through, including the Chain Rod, Recoil Rod, and Zero Knuckle.

With the weapons available, you are able to place them into two slots for Zero, the Main and Sub. The Main is used by pressing B on Nintendo Switch, with the Sub very oddly mapped to R+B on the Switch. You can go into the controls menu and set it to where the Sub weapon is controlled by only having to press B, which absolutely should have been the default. Even if they wanted to make it as similar as possible to the original, there is no reason that default should not have been changed in this case.

Something not found in the X series at all is the ability to upgrade your weapons. This doesn’t require you to save up some sort of currency to then upgrade, but rather is entirely dependent on how much you use said weapon. The more you use your Z-Saber, the higher it will level up. Each level brings new perks, such as the Triple Slash and the ability to charge your weapon. While you will probably be using your Z-Saber most of the time, it’s still worth using your Buster Shot and such at times to try and level them up for when you need them as well. 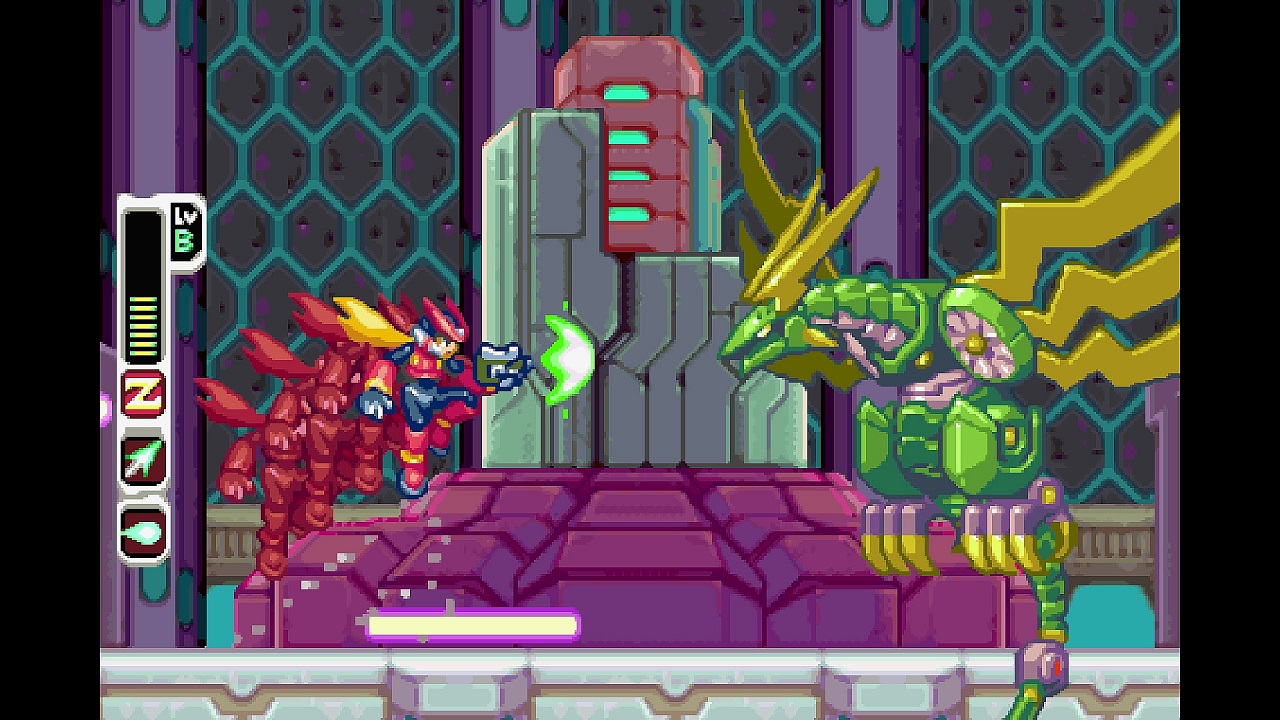 Rather than collecting new Z-Saber moves for each boss you defeat, the four Mega Man Zero games instead introduce an elemental system, where you get a few Element Chips for defeating certain bosses that you can then use to infuse your weapons with. To use the elements though, you have to charge up your weapon, which requires the leveling up mentioned above. These elements can be very useful against bosses, so it is similar to the other Mega Man games in that sense.

The series also introduces what are known as Cyber-Elves, which serve to replace things like E-Tanks and other items. You will find these throughout the game, whether from defeating certain enemies or objects. The different Cyber-Elves have different abilities that can help you out, but you will really have to grind during what is a pretty short game to really get a lot of use out of them. Some are definitely more useful than others, so it’s important to learn which ones to keep an eye out for when playing.

Mega Man Zero tried to set itself apart from the Mega Man X series by trying something new with the structure, which was sort of hit and miss. The game had a hub area that you can explore, though it was pretty small that allowed you to talk to characters and visit a few areas. From there, you could take on missions that often had you going back to the same stages with different enemies and bosses to face. This sounds pretty similar to what you would expect from Mega Man, but what was different was the way missions and lives were handled. In most Mega Man games you could lose all your lives in a stage and you would automatically restart after dying with a set amount. 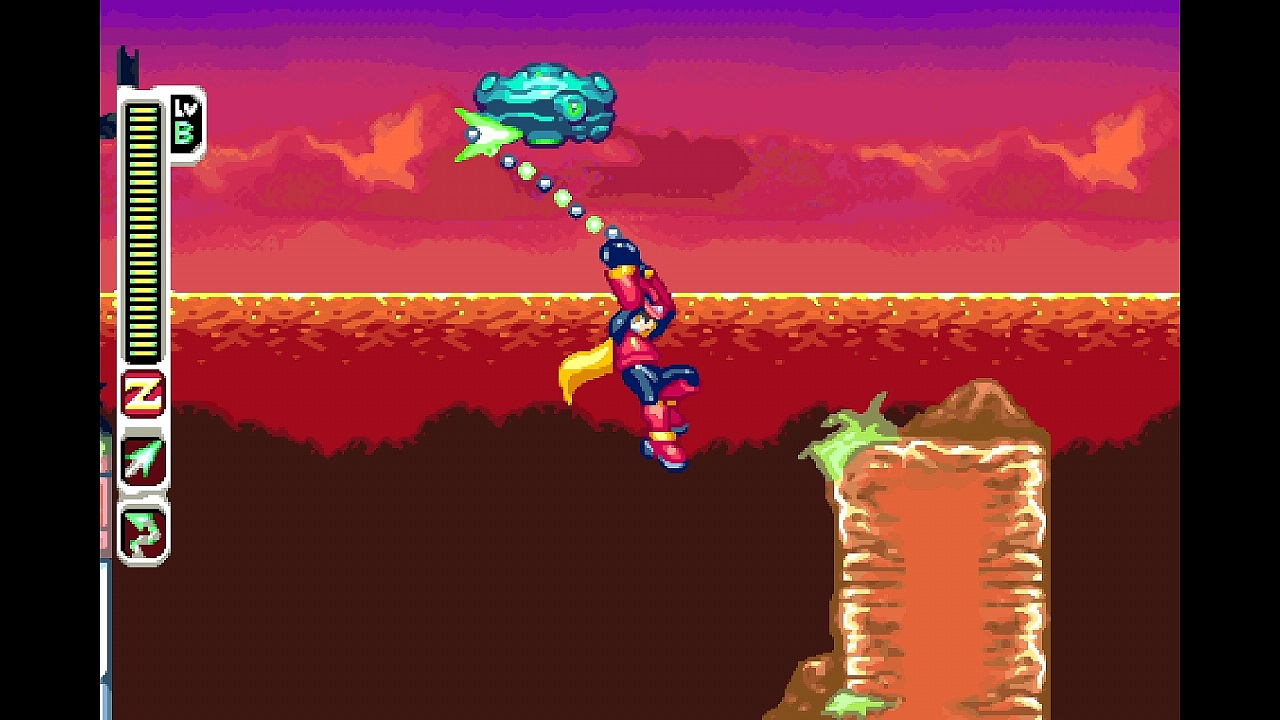 This game was much more difficult, as you only had one set of lives to try on a stage, which was dependent on how many you had when taking on the mission. If you died, you would have to either restart your save with how many lives you had before or just skip the stage entirely. The level of difficulty is certainly up there for a franchise that is already known for being very hard, so this may be something that could turn some people away from these games.

For those who are really struggling, the Mega Man Zero/ZX Legacy Collection add in a couple features to make things easier if players want to use them. These are known as Casual Scenario Mode, which lets you experience the story without all the difficulty, as well as Save-Assist, which offers more save opportunities for players. While still difficult, the three follow-up games adopt a more standard Mega Man structure with choosing levels that you can keep retrying. 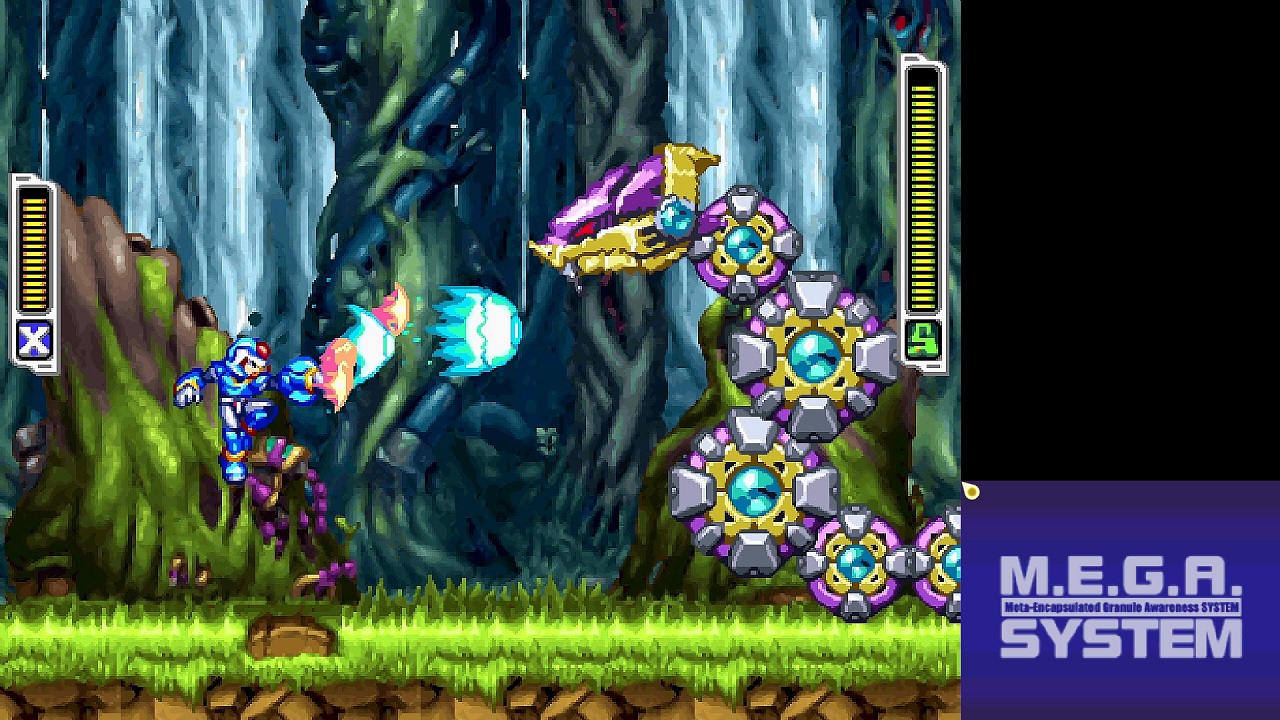 On top of the four Mega Man Zero games, this compilation also includes two games from the DS era known as Mega Man ZX and Mega Man ZX Advent. Moving forward another 200 years from the events of the Mega Man Zero series, Mega Man ZX lets you choose to play as one of two characters named Vent and Aile. It was pretty cool to finally be able to play as a female character in the Mega Man series with Aile, though the story stays the same regardless of who you pick. This carries over to the sequel as well, with you being able to choose between Grey and Ashe.

The basic premise of both is that the playable character has what is known as Biometal and must go around and collect other Biometals by defeating Mavericks that have now returned yet agin. These Biometals allow for different forms through the armor that your chosen character has. You can also just revert to your human form as well, which is useful in certain areas.

Mega Man ZX and ZX Advent maintain a lot of the same gameplay elements you would expect from the series, feeling like a mix of X and Zero. There is one major change that really sets the two games apart from the rest of the franchise, which is something that can be a bit divisive. While you can still select missions to perform and have bosses to take down, these two games feature an open map setup that has you traversing through different sectors that make up the larger map. It’s not quite a Metroidvania, where you keep getting new abilities that open up the map further, but rather you have to find your way through these maps that can get confusing very quickly as a result of so many exits from one single location. 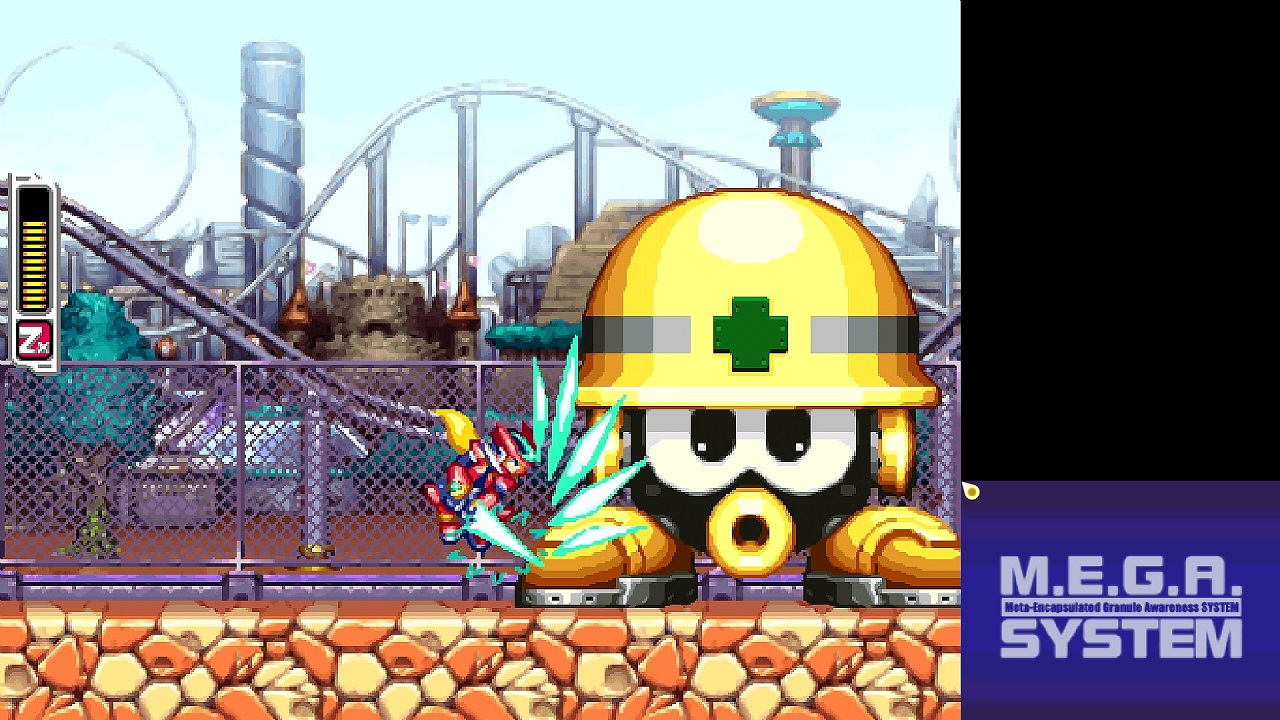 Moving away from the games themselves and focusing more on Mega Man Zero/ZX Legacy Collection as a whole, all six games are housed in one easy to navigate menu that you can get back to quickly by opening up another menu from within each game. The aforementioned Casual Scenario Mode and Save-Assist may seem to go against what the franchise itself is known for, but removing barriers to where all players can experience the game is always good to see. Also brand new in this collection is what is known as Z Chaser mode for all six games, which lets you race against ghost times and features online leaderboards. For the speedrunners out there, this is a good option to add into the game that can add some replay value beyond the initial playthroughs. Lastly, the game also offers a Gallery and Music Player for each game that you can enjoy at your leisure.

Zero has long been a fan favorite character since his debut in Mega Man X, so it has been a bit of a surprise that the series focused on him or its somewhat follow-up has been dormant for so long. While not a brand new game, that wait is finally over with the release of the Mega Man Zero/ZX Legacy Collection. Even with some of the changes to the formula across the six games in the collection, the Mega Man Zero/ZX Legacy Collection is bound to satisfy most every Mega Man fan out there.