The latest news in the world of video games at Attack of the Fanboy
February 19th, 2013 by William Schwartz 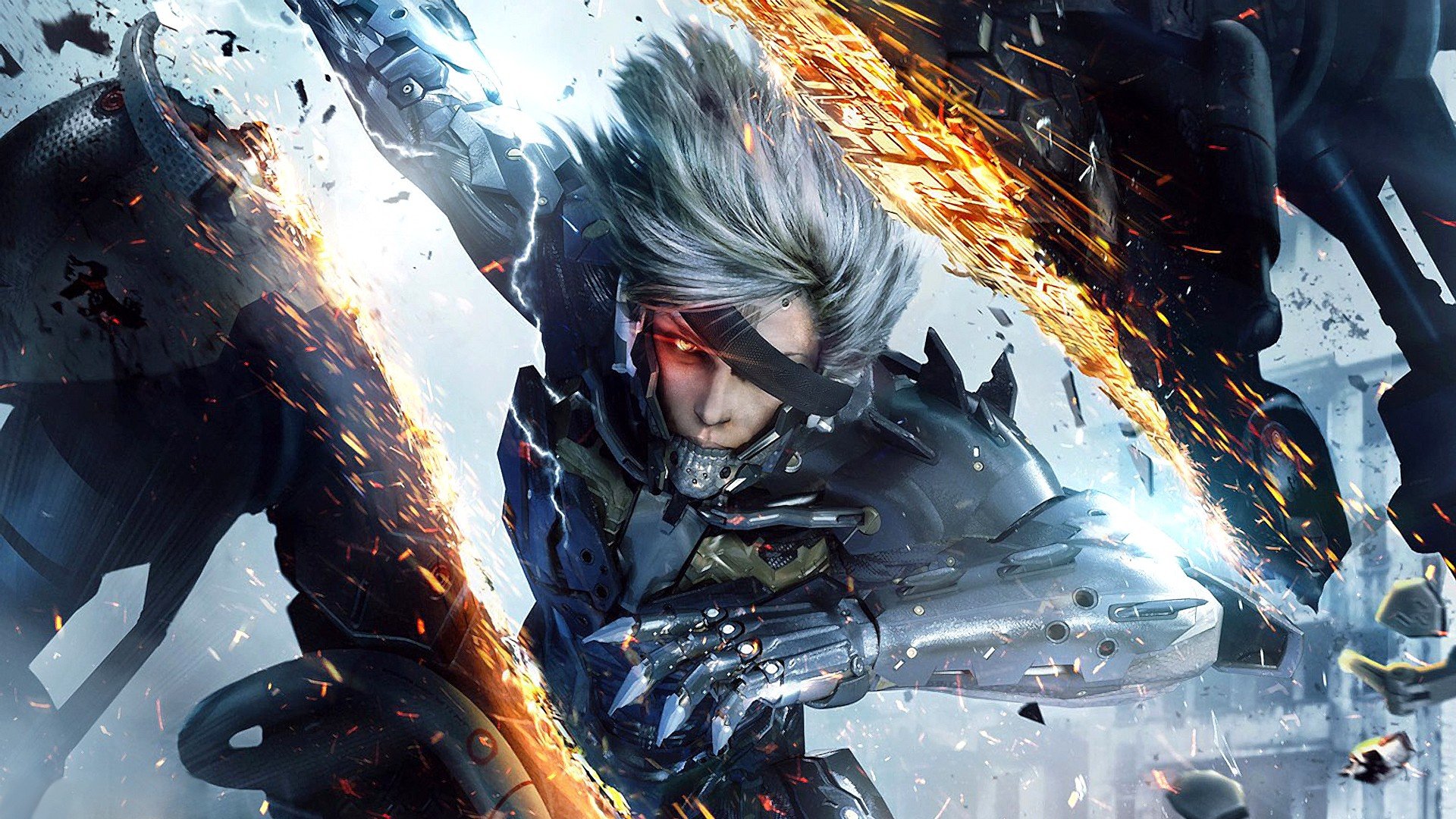 With Platinum Games handling the gameplay, and the familiar graphics and story line from Kojima Productions, Metal Gear Rising Revengeance seems like a match made in heaven. While fans of the franchise may be impassioned about the different tune that Rising sings, fans of the chaotic action that Platinum Games is capable of delivering will surely appreciate the trade-offs. Rising stars Jack (Raiden), the controversial character that was introduced back in Metal Gear Solid 2: Sons of Liberty, and then more recently seen in Metal Gear Solid 4: Guns of the Patriots. If you’ve played MGS4, you’ll know Raiden from the incredible cutscenes where he battled Vamp with his trademark blade. The good news for those that were amazed by these scenes in Guns of the Patriots is that Metal Gear Rising: Revengeance is exactly this, except now, you control everything.

Revengeance is set in the Metal Gear Solid Universe, after the events of Guns of the Patriots.  Those familiar with the backstory for Raiden know that he is a cyborg who was trained in virtual reality, but also has a bloody past as a child soldier better known as “Jack the Ripper” in Liberia.  Since this Metal Gear game is all about Raiden, the story is one that fits into his timeline, and develops him more fully than we’ve seen in past Metal Gear games.  His quest is to stop an organization known as “Desperado Enterprises”.  These bad guys are harvesting children’s brains and training them in virtual reality similar to how his childhood transformation began.

Metal Gear Rising is a game that is brilliant at times, and at others, feels like a project that was full of indecision. Here’s what we loved and hated about Metal Gear Rising: Revengeance. 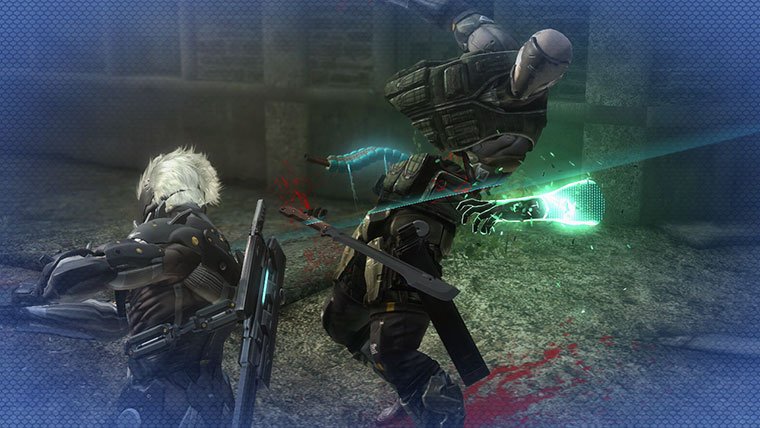 What we loved about Metal Gear Rising

Pure Platinum – Apparently Metal Gear Rising wasn’t always going to be an action title. While Kojima Productions introduced the game as such, they had problems making the game they wanted to make. As a result, Rising was quietly cancelled and put on hold. Enter Platinum Games, which means the action is fast and chaotic, but it maintains a nice rythmic feel, similar to that found in previous games from the developer in this genre.  But comparisons can stop there.  Metal Gear Rising Revengeance is a brand new experience for action fans, this is not something that you’ve seen before.  Rising is a crazy new take on the Metal Gear franchise.  In a perfect world,  this developer mashup should work, but there are a lot of things in games that sound like they should work and fail miserably. Thankfully these two teams have made a game that not only is completely fresh, but also satisfies that craving for more Metal Gear goodness.  That is probably attributable to Kojima Productions allowing Platinum to handle the things that they know best after realizing that action wasn’t their strong suit.

You have not played this before – A lot of games in this genre feel very similar to one another.  Usually the major differences between them come by way of story telling and graphics, with combat only being slightly varied.  Metal Gear Rising on the other hand, has one of the most original combat systems seen in this type of game.  It’s not an easy system to master, but is one that beckons for precision controller input from the player.  There’s a lot to dig into in Rising, and coming into the game for the first time, it could take two or three chapters before you start putting everything together.  Metal Gear Rising  probably could have been an alright action-melee style game without the first person Zan Datsu blade mode, but the combination of the the third and first person controls make each battle a unique occurrence.  While every battle starts off in third person, as an enemy is weakened, spots on their body will show up that can be attacked in the first person mode.  You can hack off limbs or any area of the body that is highlighted.  Furthermore, if you can slice specific spots on an enemy you pick up extra in-game currency or powerups.  In battles with multiple enemies, knowing when to go into blade mode can replenish your health at crucial moments in a fight.  The combat looks fantastic too, whether judging it in the third person perspective, or in the time slowed and more cinematic instances.

The game within the game –  There aren’t many action titles like this that don’t include some form of character customization, and MGR is no different.  Raiden can be customized and outfitted with numerous alterations, some cosmetic and others that increase vital statistics and introduce new attacks.   These customizations are earned by how you perform in battle.  You’ll be graded on each encounter, and awarded Battle Points for how well you perform.  This score is tallied and placed into a bank for you to use on these customizations.    As I said above, the combat is easy to learn and hard to master.  It could take a considerable time investment to get your slicing skills up to S level.

A good mix – It’s not all slicing and dicing in MGR.  There’s a ton of call backs to the Metal Gear franchise that will keep fans entertained.  The inclusion of stealth and the traditional radar mechanics play a big role in this game.  You’ll be dodging cameras, auto turrets, and even scurrying around in a cardboard box at times.  Some areas are easier to progress through if taking a more tactile approach.  While it’s a far cry from Metal Gear Solid 4, you can  and will do your fair share of sneaking up on enemies and dispatching them silently when separated from the pack.   For Metal Gear fans, the mileage on this story will vary.  Since it explores Jack, his roots, and a personal mission, it will depend on if players can relate to this character like they have to the ones in other Metal Gear games. 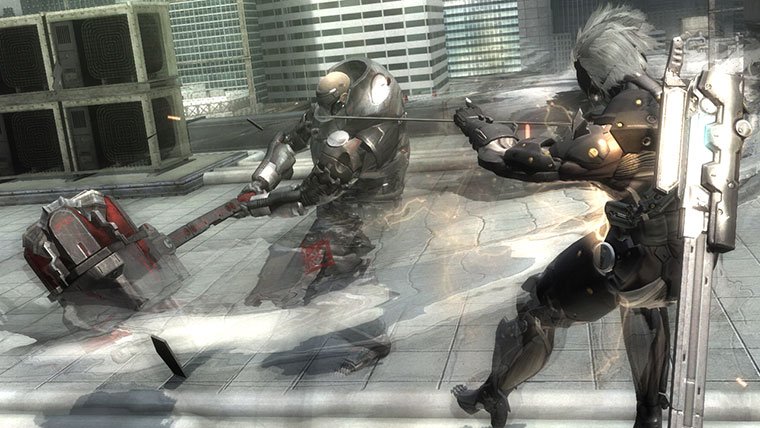 What we hated about Metal Gear Rising

Unruly Camera – Without a doubt, the biggest issue in Metal Gear Rising Revengeance is the camera.  Right from the beginning it won’t be hard to recognize the problems here.  Moving and controlling the camera will consistently pan your view to the center of the screen, regardless of where your enemy is.  I hoped it would be one that could be overcome with more time spent in the game.  Unfortunately, it’s such a glaring issue that for the many steps forward Metal Gear Rising takes in your journey, it also continually takes one step back each and every time this problem pops up.  What makes it twice as bad is that Metal Gear Rising has a steep and unforgiving enemy AI (on any skill level) that will exploit you each and every time you get turned around by the camera.  Even when you finally do get the range of controls down and on-screen prompts committed to recognition, you’ll still see your death brought upon by a mistimed camera pan that turns you around.  It happens throughout the entire campaign and is going to be something you have to deal with if you’re going to play this game.

It doesn’t help that a lot of the enemies in Rising are fast-moving.  They will literally be doing circles around you, and since its difficult to the pan the camera and detect when an enemy is getting ready to attack, it can be frustrating, this goes double for enemies that are in the air and moving.

On the clock – Metal Gear Rising is a single player game.  It has only seven chapters in it.  These are good chapters, but for those looking for that massive Metal Gear experience that previous games in the franchise have had, you won’t find that here. There are a lot of cutscenes whose length is not to the extent of previous Metal Gear Games, but are considerable chunks of Rising nonetheless.  Add these to the approximately hour or so that you spend in each mission, plus deaths (which there will be), and you’ll probably clock in somewhere around 7 hours in Metal Gear Rising.  It definitely feels a little short when other games in the franchise are such massive affairs. The last three out of seven levels are basically boss battles, and it’s unclear why Platinum didn’t continue to expand on the fighting content in these latter levels. It almost feels rushed at the end, and handed off to Kojipro to sum up the experience in a bunch of Metal Gear craziness. It’s hard to tell who had their fingers in what, but more combat in the latter stages would have been nice. Instead, the computer just advises you to try and run past a number of PMCs to get to your final destination. Past the single player campaign, there are a host of VR missions that can be picked up as collectibles, depending on how much you like trying to master these, you could be playing for some time more.

Brutal learning curve – Metal Gear Rising has alot of controls to learn and master.  On the one hand, you’ll need to learn the timing of the different enemies, as well as the appropriate times to parry their attacks.  On the other, you’ll need to learn to control Raiden’s Blade with extreme accuracy if you want to have a fighting chance in the latter levels.  When faced with multiple enemies or even a single powerful enemy, one false step can lead to a hearty chunk of your health bar vanishing quickly.  When you throw in the frequent camera issues and combine them with step learning curve, this game can have you pulling your hair out at times.

If you’re in the camp that breaks out the pitchforks everytime a sequel arrives in the video game world and one of the first to shout “cash grab”,  Metal Gear Rising will be a refreshing change of pace.  It’s hard to compare it to much other than the full realization of things we’ve only seen in non-playable moments from previous Metal Gear games.  While the camera issues and steep learning curve will probably deter some, it’s one of the more rewarding games of its type once these hurdles are jumped. It’s got some of the best boss battles we’ve seen in this type of game, and it’s a great extension of the Metal Gear universe.