Artyom's world is bigger, but not better. 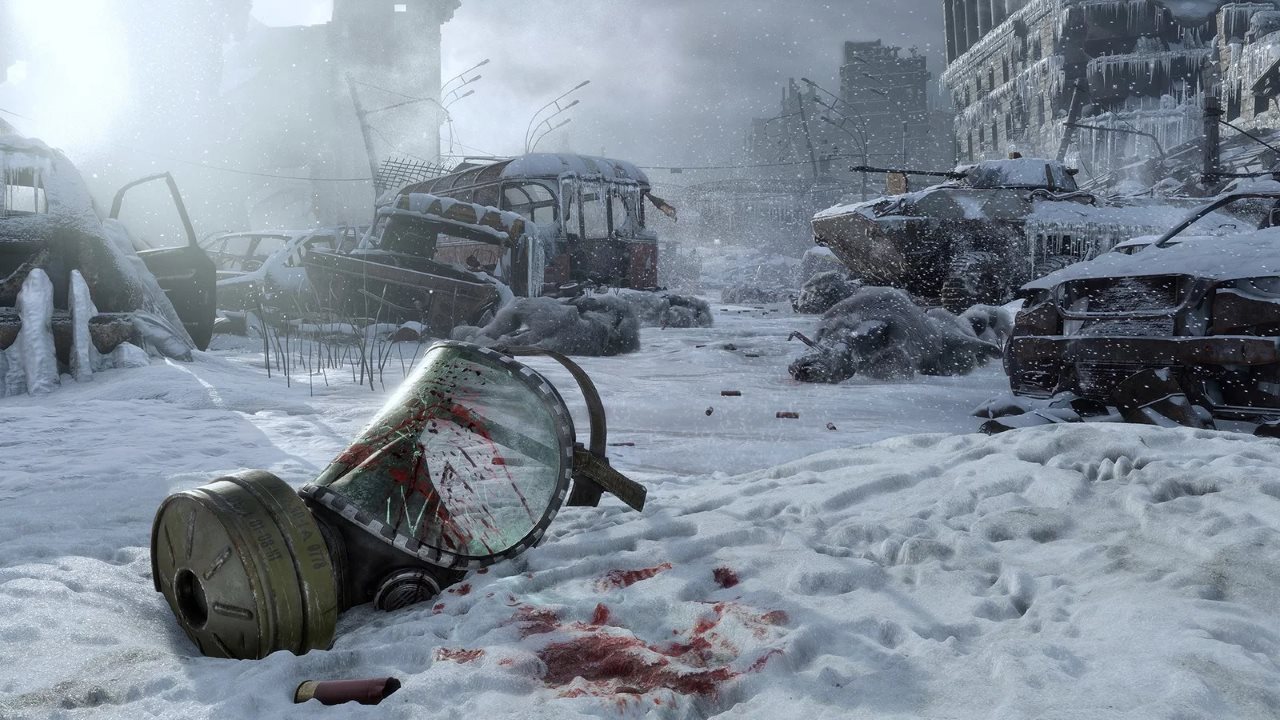 While other shooters toss out updated releases every year that focus more on multiplayer and action, the Metro series has always impressed with its fantastic and unique single player adventures. Metro Exodus continues this tradition, but moves outside the dark, dingy confines of the Moscow Metro. Unfortunately, while the world is certainly bigger it isn’t necessarily better, with some baffling design decisions and missteps that take away from what made this series so great in the first place.

After the events of Metro 2033 and Last Light, Artyom and his allies are still living within the confines of the Moscow Metro. After hearing a voice on the radio though, he is beginning to feel like there may be more outside those walls than they first thought. What follows is a more personal and character driven story than the series has seen before, with Artyom and his friends and family exploring the outside world for the first time. They’ll journey to new territories and discover what happened after the war. Can they find a new home that isn’t infested with the dregs of humanity? 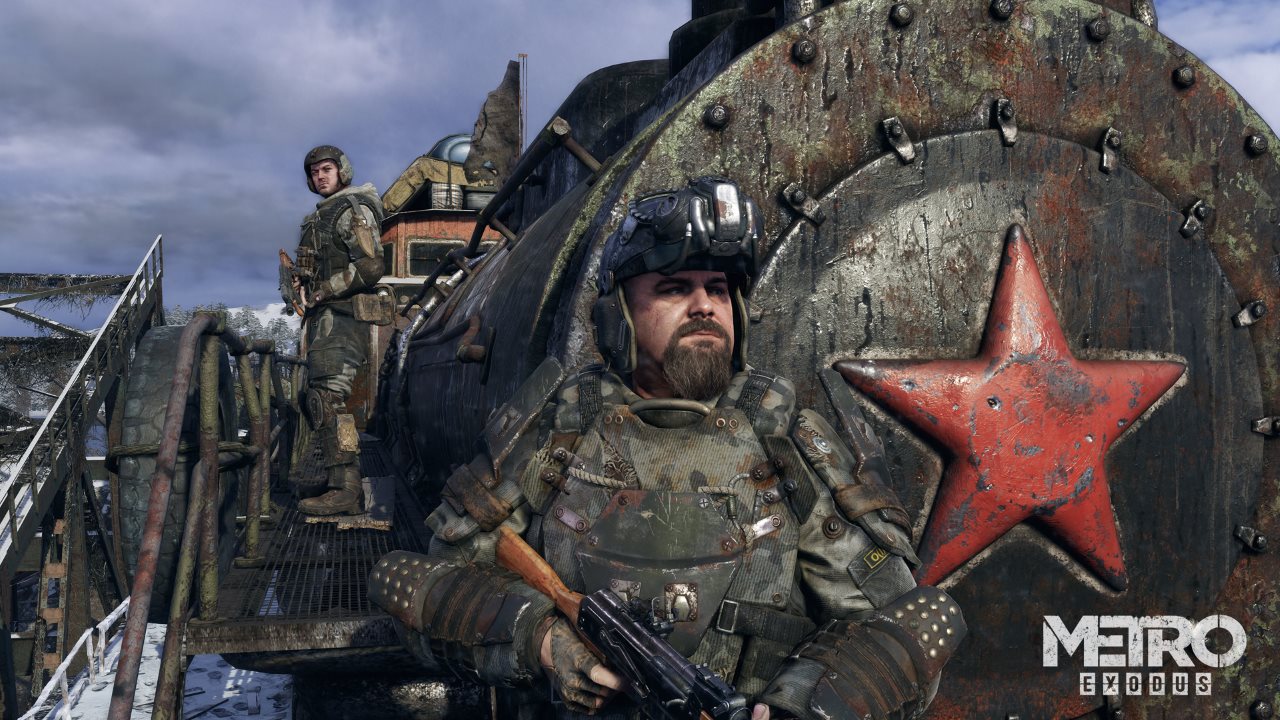 When Metro Exodus was first announced, with its open-world areas on full display, many series fans were suspicious. Could this series that built itself on the confines of the underground still retain its charm when it moved out into the light? The answer is somewhere in the middle, as Metro Exodus does still feel like a Metro game in all the ways that seemed to matter. But the overall story and gameplay falter quite badly in a number of places, many of which due to the shift to open environments.

Yes, you still maintain your weapons, which are slapped together from various parts of older weapons or spare junk the characters had laying around. Combat is still somewhat slow and methodical, only reaching peak insanity during key moments of the story. Things are still dark as well, either forcing you underground at times, or via the day/night cycle which you can sometimes use to your advantage against certain foes. What’s missing is the underlying feel of a quality shooter that used to hold all of these things up.

Many aspects of Metro Exodus feel off in some significant way.

Many aspects of Metro Exodus feel off in some significant way. Shooting is clumsy and inaccurate. Movement is slow and cumbersome. Inventory management is confusing and tedious. Every major component of the actual gameplay just falls flat the second you move past the opening section, which rarely has you actually in control of the action. In fact, large chunks of Exodus remove the player from the game, either having you sit/stand while other characters talk or just outright taking control and having things play out without you involved. These design choices worked well in the smaller and simpler environments of 2033 and Last Light, but slow movement is a bit of an issue when you need to trek across large swaths of land.

The story-heavy moments also feel troublesome as the plot isn’t really that engaging. The shift to characters makes sense given how long this series has been around, but the first two games focused on larger, deeper storytelling that is mostly gone here. Exodus instead features a meandering plot that simply repeats itself over and over as you reach a new area, explore, find an enemy, clear them out, and leave. These are mostly the much-vaunted open-world sections of Metro Exodus, and while they work on paper, the experience of them isn’t much to get excited about. 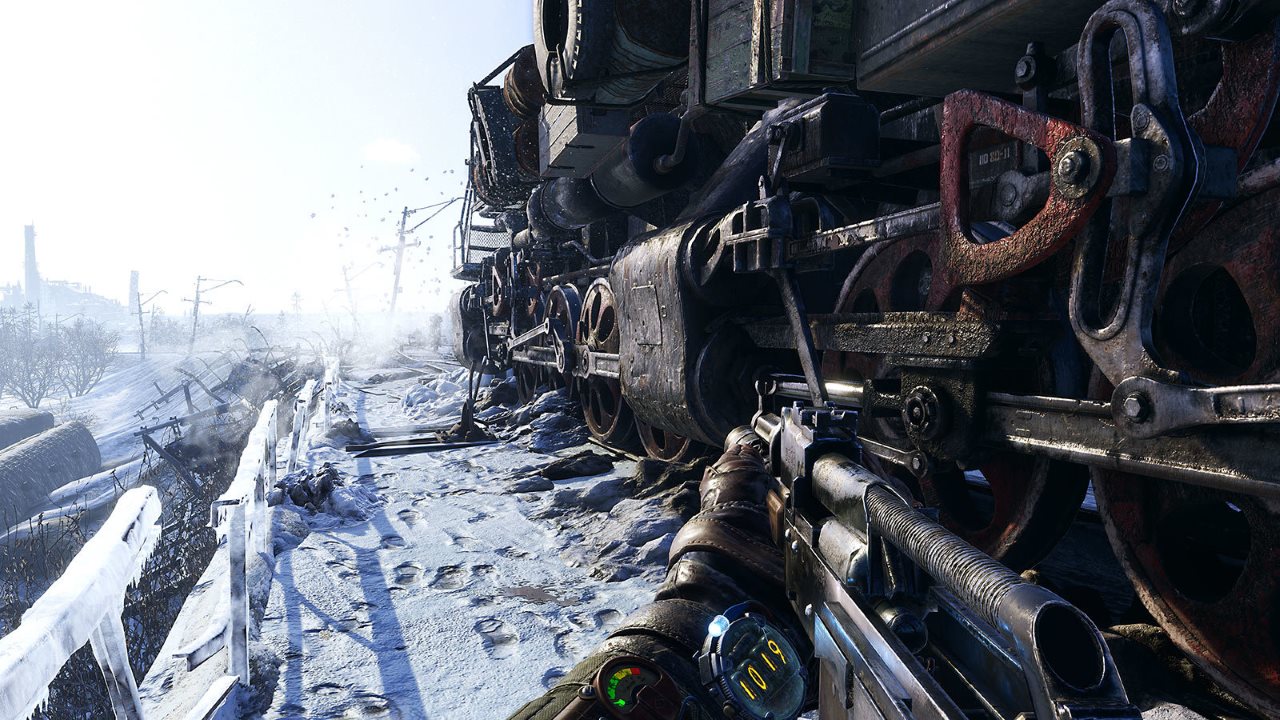 Each open-world section essentially boils down to a few main objectives, some optional areas/objectives, and a whole lot of wandering through unremarkable terrain (gameplay-wise, at least). Sometimes the game acts like you have more choices than you really do. The open-world sections are a great example of this. Yes, they allow for multiple strategies when dealing with a group of enemies. You can go in at day or at night. You can be stealthy or guns-blazing. But really, there is a best option, given how precious ammo and resources are, and you’ll choose it every time it’s offered. Sure, the ending may be determined by how bloodthirsty you are in these moments, but the consequences of that are so far off that it’s easy to forget or ignore. In the end, it all feels so bland, with little of the amazing world building players have come to expect out of Metro.

Similarly every enemy or friend that you meet along the way feels and acts almost the exact same as every other enemy and friend, even if the story supplies you with motivational differences that don’t pan out in the gameplay. There are moments where you feel that this could have become more, with factions that seem like they could be your friends, or enemies who surrender when the odds turn against them. Some minor parts of this might play out in the narrative, but overall everything trends back to killing or incapacitating everyone who is not clearly your ally. There’s little variety to your actions and goals, and the open areas, along with the people you find in them mostly just serve as a backdrop to an otherwise linear game.

All of this would be excusable if the base elements of moving and shooting felt good, but they have issues as well. The simple act of walking is a slow and cumbersome affair that brings about frustration quite often. Ledges and branches will block your movement seemingly at random, and the slow, loud climbing animation just adds to the tedium. Occasional vehicles help get you from point A to point B, but these present their own issues. For example, the boat that is featured multiple times is slow and can be frustrating, with enemies that require you to come to a complete stop, slowly exit to stand up, shoot them, then re-enter paddling mode. It’s a minor point, but there are other moments that cause the same feeling of exasperation. 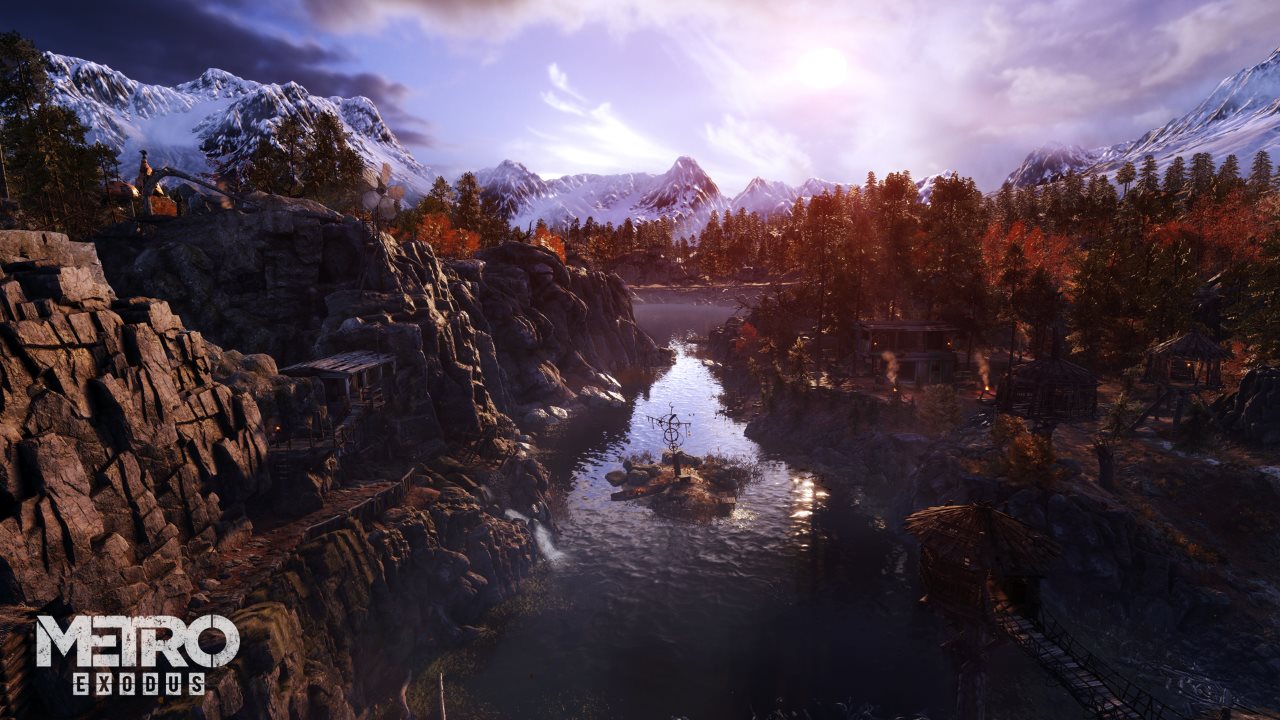 Add onto this some odd sound mixing that creates a feeling of emptiness where there should be life, and a mixture of too loud and too soft audio and Exodus begins to show cracks where it needed to be solid. Characters look great, but their movements are stilted too often, and this is before things start glitching, with clipping through level geometry or non-animated movements being a semi-regular occurrence. Sometimes enemies will seem to get confused and just stand around as well, making for immersion breaking moments that dampen the whole of Exodus.

The underlying design is partially broken, creating a lesser experience than its predecessors in almost every way.

Exodus is not all bad, of course. Far from it. One of the ways that Exodus exceeds its predecessors, and does so quite spectacularly, is in the visuals. Metro Exodus looks amazing in almost every way. The characters are highly detailed, the landscape is magnificent, and it all serves to expand on the world-building that has gone into this series. Even the nighttime scenes where stealth is key offer great views, with the Moon looming over foggy landscapes that are completely screenshot worthy. But once you stop staring at the images on screen and get back to the gameplay things falter once more.

Whether in stealth or in combat, the enemy AI isn’t up to standards set by other shooters, likely due to moving outside the confines of the Metro. While sneaking around you’ll find that anything but standing directly in their line-of-sight, in good lighting will go unnoticed, even on higher difficulty settings. Once they do spot you, combat involves them firing shots that alternate between sniper and Storm Trooper level accuracy. Their tactics mostly involve either standing around, or getting slightly behind cover and popping off shots. Animals and other non-humans don’t fare much better, simply looking confused or charging you wildly, exposing further issues with the slow combat system. There’s no real strategy involved in the firefights, and if things get too bad, your best bet is to usually just run away, often leading to the next objective trigger which will eliminate the impending threat. If you do die you’ll deal with a bit of a long load time, though nowhere near as bad as the inter-level loads which can stretch to beyond two full minutes. 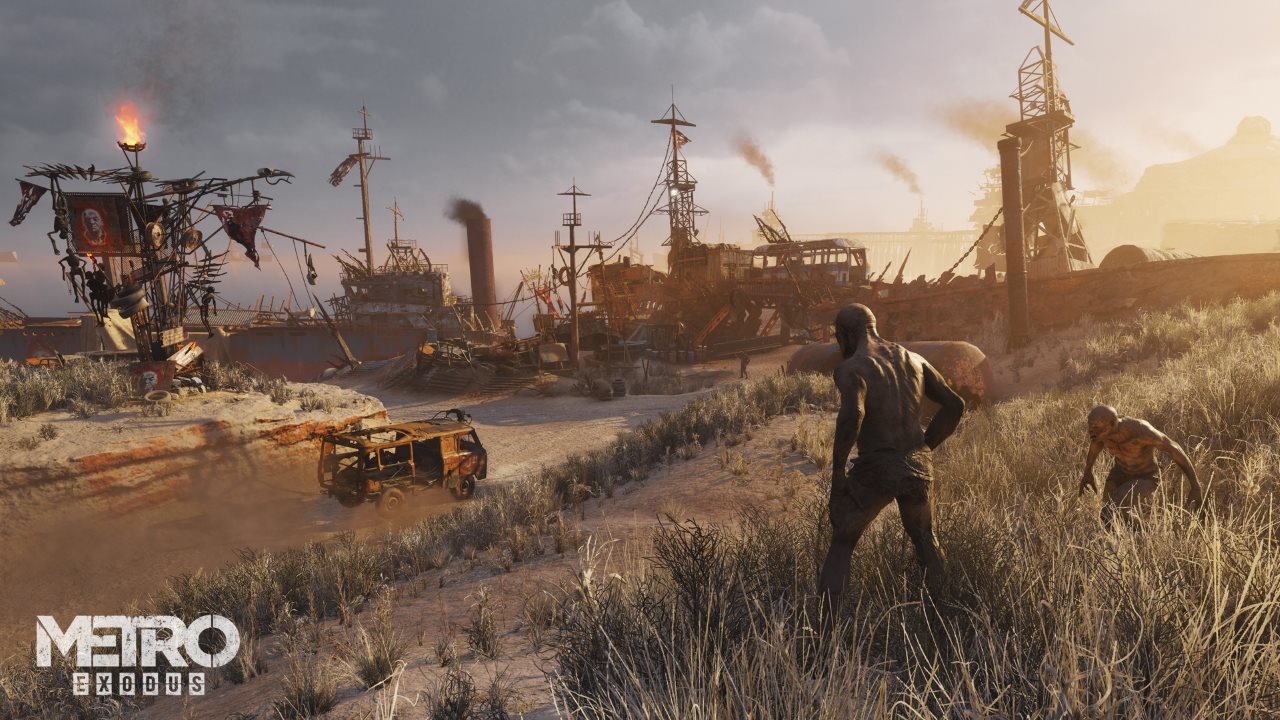 Getting back to the good stuff though, the other fine addition to Metro Exodus is crafting, something that tends to lessen other games but works wonderfully here. With just two materials players can create anything they want or need, with a limited selection available when not at a workbench. While finding crafting material can be tedious, it’s readily available in the quantities you need, and your backpack allows you to make the essentials anywhere you want. Being able to snatch upgrades off of downed enemies’ weapons is also great, letting you enhance the guns you like, rather than swap for something you don’t need. And this customization is far from simple or unnecessary. Using the attachments available you can totally rework your guns to better suit your play style, even creating two different variants of the same base weapon.

I’ve presented a lot of complaints about Metro Exodus, but it is still a decently enjoyable game overall. However, it feels like a great game that was layered on top of a mediocre shooter from many years ago. Even when there are amazing moments, such as a truly disturbing section near the end of the game, they are marred by the other problems. For example, that endgame section required silence, but when I randomly fell from a ledge and drew the enemy’s attention he was immediately stuck on the stairs, running in place as I made my way to the exit. The quieter moments work better, and many will elicit a “wow” or awestruck look as the visuals overtake you. But then it’s back to the gameplay that feels like what it is: a corridor shooter transported to the open-world.

Following off the stellar Metro 2033 and Last Light, Exodus feels like a misstep for this series. The underlying design is partially broken, creating a lesser experience than its predecessors in almost every way. The open-world sections don’t add much beyond eye candy. Gameplay feels unpolished and slow, and not in a realistic/good way. And the whole thing feels unfinished with a few hard crashes, perpetually long load times, and poor audio throughout. This series has built a reputation on its quality, but Exodus falls flat in some ways that truly matter. It does look gorgeous though, and this is still a unique world to explore, if you can ignore these many other problems.