A technological leap in the simulator genre. Microsoft Flight Simulator 2020 might sound like the most boring Microsoft exclusive ever built, but it also might be the most ambitious.  This is a game that leverages Microsoft’s technology and assets to recreate the earth in video game form, giving it you as the player to explore at your will.  Pick a place, any place on the planet Earth — from the most densely populated to the most remote and you can visit it in Microsoft Flight Simulator.  Not only can you visit it, what you’ll find when you go there is a near identical digital representation of that location that’s built with a number of algorithms and data points.  Buildings, trees, roads, rivers, landmarks… Microsoft Flight Simulator takes and streams in all of the data via the Azure cloud to build the world that you fly around in.

Microsoft Flight Simulator feels like a technological leap.  With that leap requires actual technology on the player end as well. The best possible experience in the game is for the player who has the best internet connection.  On the contrary the worst experience would be the person who is completely offline.  While the game is playable across that entire spectrum of online connectivity, the more bandwidth you can throw at the game, the prettier and more realistic the game world will be.   So accurate is it?  It is the entire world that’s encompassed here so it’s hard to tell exactly, but we took the game for a spin across numerous places that we’ve lived and it impressed. Microsoft Flight Simulator is so accurate that you can fly and navigate the world based on just your visual senses.  That means this isn’t exactly a representation so much as it is a re-creation.  If you know an area, you can navigate around it using the streets and landmarks that you’re familiar with.  This is the amazing trick that Microsoft Flight Simulator pulls, because it’s clearly not a 1:1 recreation of the Earth.  They didn’t include every tree, every blade of grass, accurate rooftops for every building in every nook and cranny of the actual planet… but they’ve included so many of the smaller details that it can fool you into thinking they did.  With a mixture of in-game settings that you can switch in terms of the time of day, weather, and more, you could witness anything.  You could watch the sun set over the Hawaiian Coast, fly to the top of Mt. Everest, venture through the Bermuda triangle, or visit the most remote, beautiful, or dangerous locations in the world.  The choice is yours, and the choices do feel endless at times.

This flight sim gives you endless opportunities to explore the world

As technologically impressive as it is on some fronts, there were others that disappointed.  The game itself crashed a lot, almost every single session we played in resulted in needing to restart at some point. Hopefully this is an issue that is fixed when the developers have more data.  While the possibilities are endless in terms of where you can go, what is somewhat limiting is all that surrounds the core gameplay.  If you’re looking for the trappings of other modern video games, you’re not going to find them… or at least not anything too robust.  There is a pilot’s profile that you maintain, which allows you to rack up flight hours, earn badges and, of course, achievements.  That’s really all there is when it comes to challenges/collectibles or progression.  There are live events, which are essentially scenario high score chases, but there aren’t many of them (one at the time of writing).   It feels like there’s a missed opportunity for more developer curated content and perhaps we’ll see that in the future. 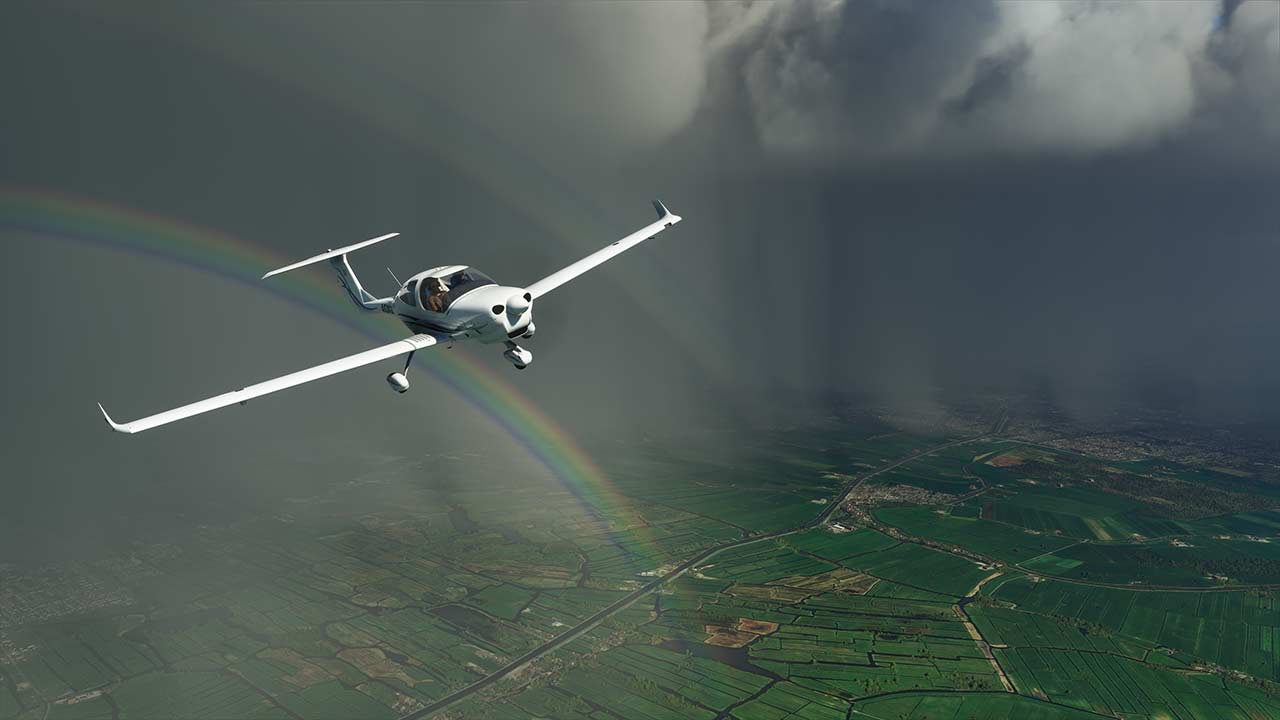 There are some activities here at launch that can give send you in the right direction of adventure.  These include famous airports, dangerous situations, and other iconic flight situations.  Alongside them are also a series of Bush trips that require you to fly long distances in remote locations.  Other than that though, you’ll need to get creative in terms of what you want to see and do.  There is a good variety in the planes that you can fly so there’s plenty to master, but when you come to terms with the controls and systems it’s really all about seeing the world from the sky, going wherever you want to go.

Kick back and enjoy the incredible views

That said, the actual flight and physics of the game felt realistic.  There’s plenty to wrap your head around when it comes to controls, whether you’re flying one of the more basic planes or the most advanced.  While we would’ve loved to get into this with a flight stick, we had to settle for the Xbox One controller.  It seemed to be a better alternative than the keyboard and mouse, but every person will have their preference.  Coming to terms with the controls and MFS really becomes a sit back and enjoy the ride type of game.  It’s beautiful enough to be that as well.  Kicking back at 20,000 feet and enjoying the view is all you really need from this game at times. The accuracy and authenticity of the world is already impressive but it doesn’t stop with how the earth looks.  Data is also being pulled in from the real world in terms of air traffic, time, and weather.   You can fly in LIVE, real world conditions or you can set the perfect flight conditions that you choose.  The skies will also be populated with other planes.  These are comprised of real world flights, as well as other online players.  Who and what you see depends on the settings that you choose at the start of your flight.  This has been described as a one shared experience game, but you can do things like start your own shard on the server that allows you to play with custom rules with players that can be invited to your instance.

Microsoft Flight Simulator isn’t trying to be something that it’s not.  It’s a rare case where Microsoft is targeting a dedicated fan base with laser focus and giving them just about every possible thing they’ve asked for, bringing the genre into a modern era with technology that delivers an incredibly accurate simulation that is mostly derived from real world, real time data.  It’s hard not to come away impressed by this game.  Microsoft Flight Simulator is an absolute must for flight sim fans, but anyone with even the slightest bit of an explorer’s nature should definitely enjoy this one as well.