A spin-off adventure that can stand on its own. Monster Hunter Stories 2: Wings of Ruin is not a title that relies on its franchise’s branding. In contrast to many other spin-off games out there, this is not just another cash-grab, nor it fails to deliver what its mainline series is known for. What I want to say is that the sequel to the Nintendo 3DS’s Monster Hunter Stories is an outstanding RPG, that even without carrying the name of the juggernaut IP, could easily stand on its own as a fantastic Pokémon-like adventure, adding a unique flair to it.

As a Monster Hunter entry and continuation of its 2016 predecessor, expect hundreds of Monsters to find, hunt and surprisingly, raise from infants. You heard that right, in Monster Hunter Stories 2 the main focus is to breed hatched Monsters, or Monsties as people call them in the game, and fight alongside them other Monsters and various threats. While the essence of this universe is the same as the main series, the execution and different playstyle is what makes Wings of Ruin truly unique. Additionally, this is where the game exceptionally succeeds, as it manages to keep everything that made the original action-RPGs famous, but with a twist that doesn’t subtract what makes this world so amazing. 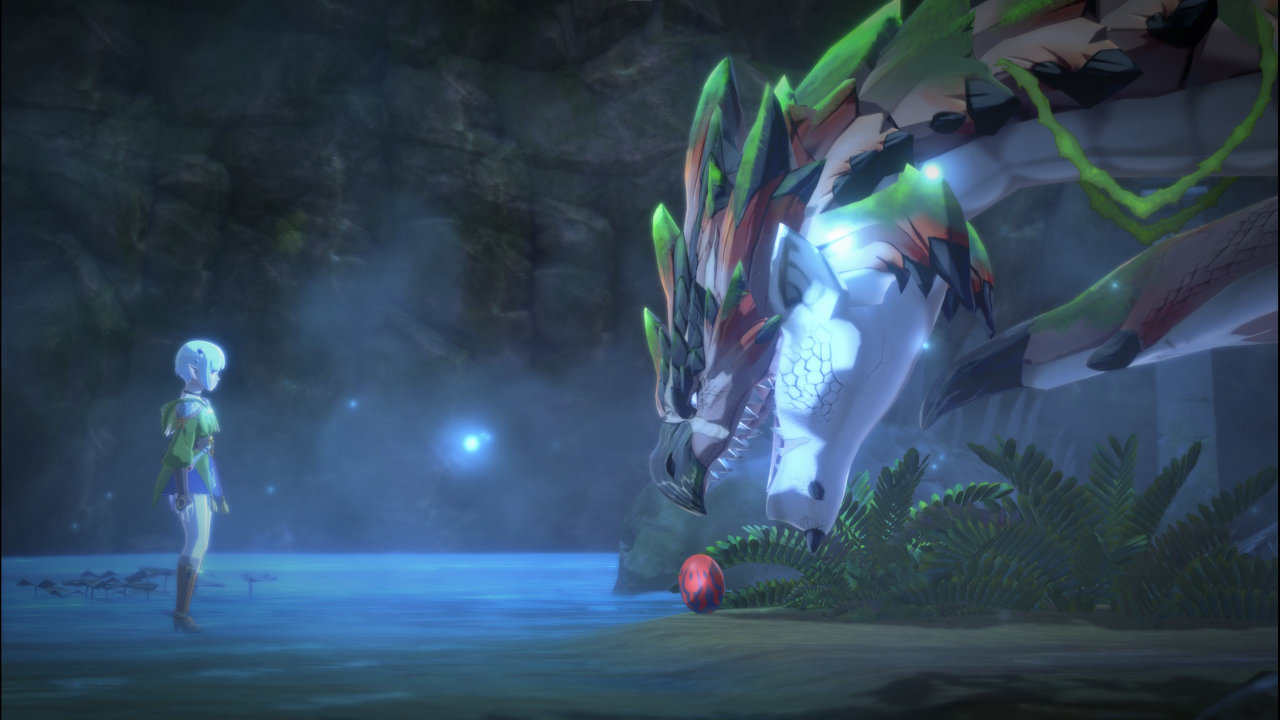 A simple, yet beautiful story with lots of surprises and exciting moments.

It would be a shame to spoil anything Monster Hunter Stories 2: Wings of Ruin’s story has to offer, as it is surprisingly a full-fledged role-playing game with focus on narrative, so I will try and avoid any major spoilers in here. To sum up things though, and in order for everyone to understand what is going on, we need to mention a couple of things. Especially considering that you are not a Monster ‘Hunter’ in this entry, but rather a Monster Rider.

Contrary to Hunters’ beliefs, Monster Riders prefer living alongside Monsters peacefully, finding a balance between the civilized and wild world of this magnificent universe. As such, expect to see lots of Monsters hanging around humans without actually hurting them, and vice-versa. The game begins with a ‘celebratory festival’ going wrong, and your main character seems to be stuck in the middle of it all. Weird things start happening and a plethora of Rathalos Monsters seem to be acting way out of the ordinary. One thing brings another, and your fellow villagers entrust you with searching what is going on. Everything beyond that, is where your adventure truly begins and you embark on a journey that includes a huge amount of gathering resources, finding Monster Eggs to hatch new creatures, crafting gear and fighting wild Monsters. In the midst of all this, you encounter a certain baby monster, the Razewing Ratha which is said to bring ruin to the whole world, hence the title ‘Wings of Ruin’. That is where the story really ramps up and your quest becomes much more complicated. 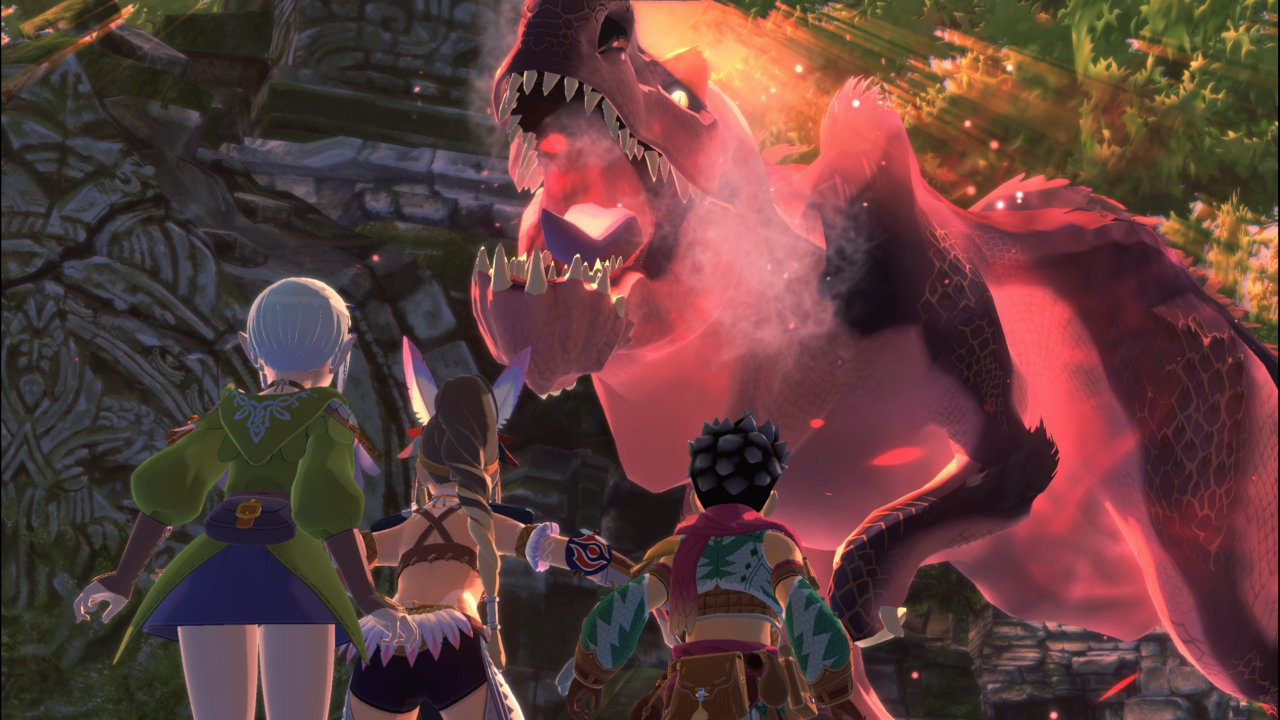 Battles are fast and satisfying, negating the old saying of “turn-based combat is slow and boring”.

You begin your grand adventure by choosing your main character, being male or female, and customize them accordingly. Then, you jump right into the game with events unfolding and things constantly happening as you learn more and more things about the world’s motions, mysteries and most importantly, its Monsters that inhabit every continent.

Monster Hunter Stories 2: Wings of Ruin changes the original formula of the main MH games, and this time around what you have in front of you is a fully turn-based RPG with deep mechanics that make each fight feel impactful. Additionally, its main gimmick is Monster breeding, similarly to Pokémon-catching (yes, the comparison between the two is hard to avoid), in which you will spend the most time in the game as you will find hundreds of different Monster Eggs, with a bigger number of different characteristics each. They have their own individual stats, moves, abilities you can use in the overworld and certain passive perks called ‘Genes’. All these are equally important when you start raising a Monster, as they significantly affect how it functions in combat.

While you do have your main character handling fights, with his or her own gear and abilities, alongside you will be your raised Monsties. They fight side by side with you and you can even combine your attacks for visually stunning techniques. Depending on the abilities a Monstie can have, they can either heal you, damage enemies, provide certain utility buffs and a whole lot more. The beforementioned Genes play a vital role to their playstyle, so make sure to invest some time learning how the system actually works, after you unlock it in-game.

You will also find certain individuals that will accompany you in various time frames of your journey, called Fight Buddies. They act as additional party members, if you want to put it simply, and you don’t have any control over them at all. They are a great help whenever someone joins, so you may want to tackle some hard content when they are in your team.

Lastly, battles themselves are handled through a more complicated rock-paper-scissors process which may sound a little random at first. However, this is not the case. Each monster has its own type, which you will understand after encountering them for the first time, and their pattern can be monitored so you can see what moves they like to use. This way, you will be able to predict their attacks and win the Head-to-Head instances that occur when that monster and party members go toe-to-toe with their selection of rock-paper-scissors. Win that challenge, and you will do major damage and negate most of that Monster’s caused damage.

All these take place in as we mentioned, a turn-based environment in which you have all the time in the world to think of your moves and plan ahead. What makes them not feel a chore though, is the speed-up system that is implemented into the game. At any point during a fight, with the press of a button you can speed-up the whole battle up to x3 the original speed. This is a godsent, as you will spend a good amount of time farming already visited areas, for materials and Monster Eggs. With this system, everything will be done effortlessly and you will save a great amount of time of time, making grinding actually pleasant. 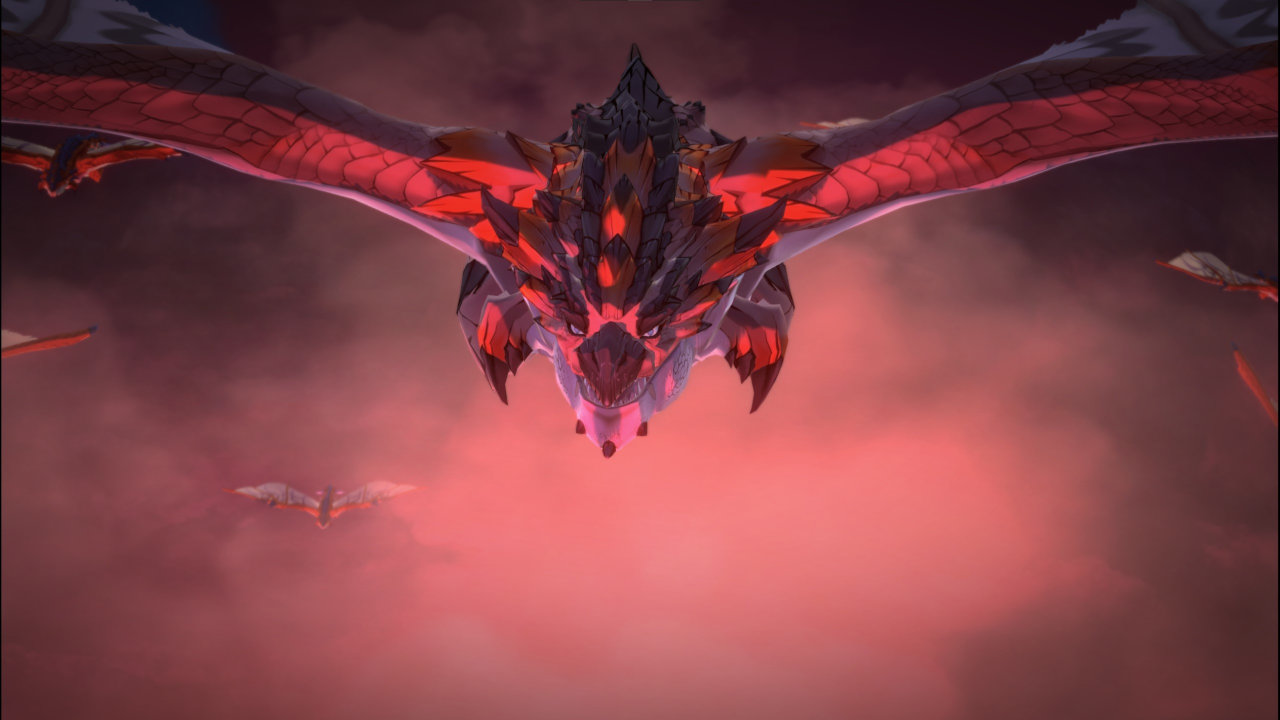 Monster Hunter Stories 2 stays true to its origin material, with elements that make it feel new and different from what we are used to.

You are not a solo-fighter against the world in Monster Hunter Stories 2: Wings of Ruin. You have your Monsties, Fight Buddies, their own Monsties and lots of different tools at your disposal, used at your own pace as well. This is vastly different than what we are used to from games like Monster Hunter Rise and the likes, but in a good way. The two series are completely different experiences, and none is negating the other. In fact, the total opposite. As I was playing Monster Hunter Stories 2, I had the urge to go back to the recent Monster Hunter Rise and hunt some creatures with the adrenaline rush its hunts provide. Which I did, and while I was tackling High Rank content over to that action-RPG, I then wanted to jump back to the more relaxed, Monster raising and riding of Wings of Ruin. I don’t know why exactly, but seeing my character being friends and riding beasts that I was slaying mere minutes ago in Rise, felt soothing.

Everything has a similar vibe, however the core gamestyle is worlds apart. This makes Monster Hunter Stories 2 to not be overshadowed by its bigger cousin, and feels like a very refreshing adventure. It may lack the fast-paced action the series is known for, or the full roster of weapons used in the main series, but for anyone who is into monster ‘capturing’, it totally nails everything. Not to mention that it still keeps the co-op element that the mainline series is also popular for, as you can tackle missions and quests with other players online. Additionally, and to be honest here, one of my personal favorite additions is the inclusion of a PvP mode, similarly to how the first entry had. Considering the PvP aspect of that game was actually quite popular, although it required heavy investment on Monster raising just to be on par with other combatants, I am so excited to see what Monster Hunter Series 2 will bring to the table on that field. Crossing fingers to have a healthy and actually competitive PvP mode, for everyone to enjoy for a long time. Including myself. 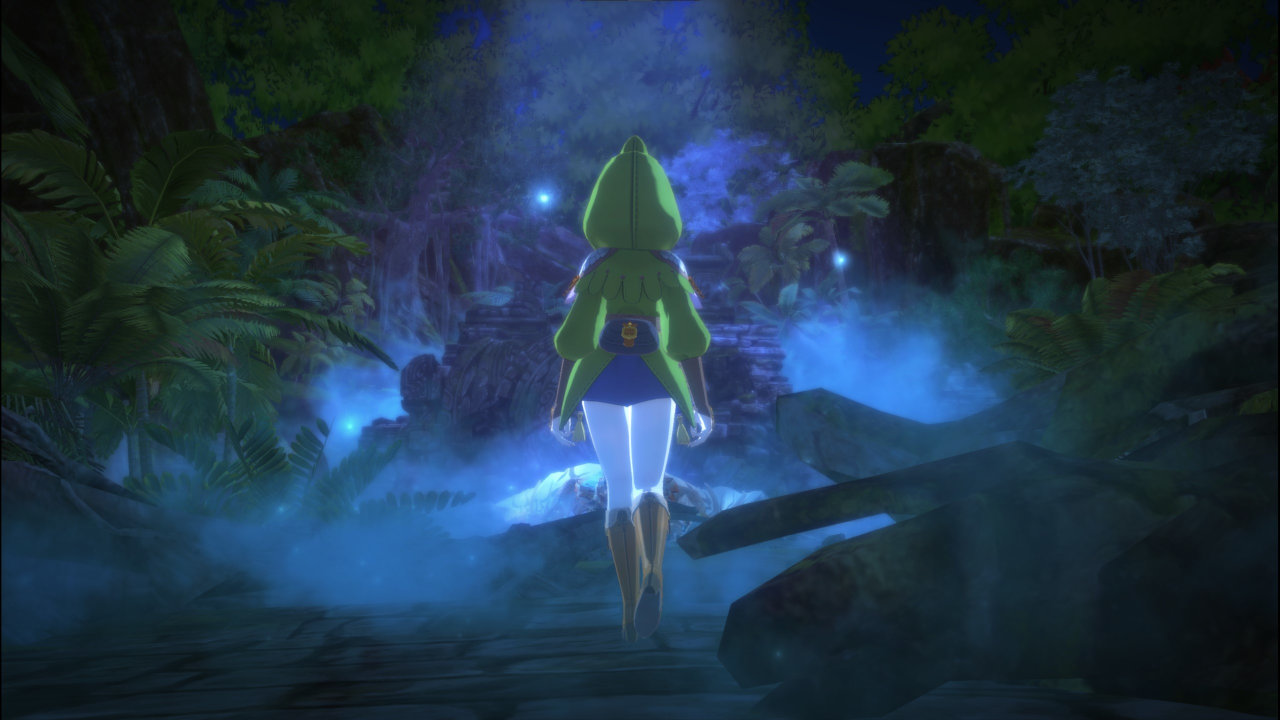 Unfortunately, there are some caveats, regarding the Nintendo Switch version.

Monster Hunter Stories 2: Wings of Ruin is a beautiful game, with bright colors and heavily animated characters and Monsters. But, this is mostly true for the PC version of the game, which this review is also based on. As we all have access to the demo version Nintendo Switch offers, I can easily say one thing without a doubt. I won’t be jumping to the Switch, pretty much ever for playing this new RPG. There are some undeniable performance issues with that version, and we are now in an era in which the Switch’s underwhelming performance seems to be more and more striking to the eye. The game shows clear FPS drops, and can barely stay stable at even 30 FPS which runs into. This is truly visible when in fights, as lots of animations and effects take place. Don’t take me wrong, Wings of Ruin is perfectly playable on the Switch, and its handheld mode can even be the selling point for a lot of people out there for this type of game, but after experiencing the more than 60 stable FPS on PC and very fast loading times, it’s hard to digest anything less. Which as a bonus, also increased my eagerness for the PC version of Monster Hunter Rise.

If you have the option to grab any of the two versions, performance-wise, go for the PC version hands-down. However, the Nintendo Switch has some other redeeming qualities. As the game is heavily promoted over to that platform, way more than its PC counter-part, it is almost certain that the active player base will be bigger over to the Switch. This means that both the co-op and PvP modes  of Monster Hunter Stories 2, will be more active to that platform. If online multiplayer is something you are planning on investing into, the Switch may be the clear winner here, although this is something that will be confirmed after the game’s official launch. You may want to wait a little and then, based on the current state of the game, decide accordingly.

Monster Hunter Stories 2: Wings of Ruin has everything you’d want from a turn-based RPG. A simple at its core but engaging story, dozens of ridable Monsters with different abilities, a huge number of customizable armor and weapons and enough end-game content and deep mechanics to keep you occupied for hundreds of hours. That is before we even mention again the online co-op feature, and a competitive PvP mode. Truly, the new sequel to the spin-off series is more than just a way of milking the franchise and a title that will for sure have its own cult-following.

While the Nintendo Switch version holds the game back compared to the PC one, the game itself remains a blast from beginning to end, offerings tons of content and a unique take on the Monster Hunter formula.