Fix the timeline before it is too late. 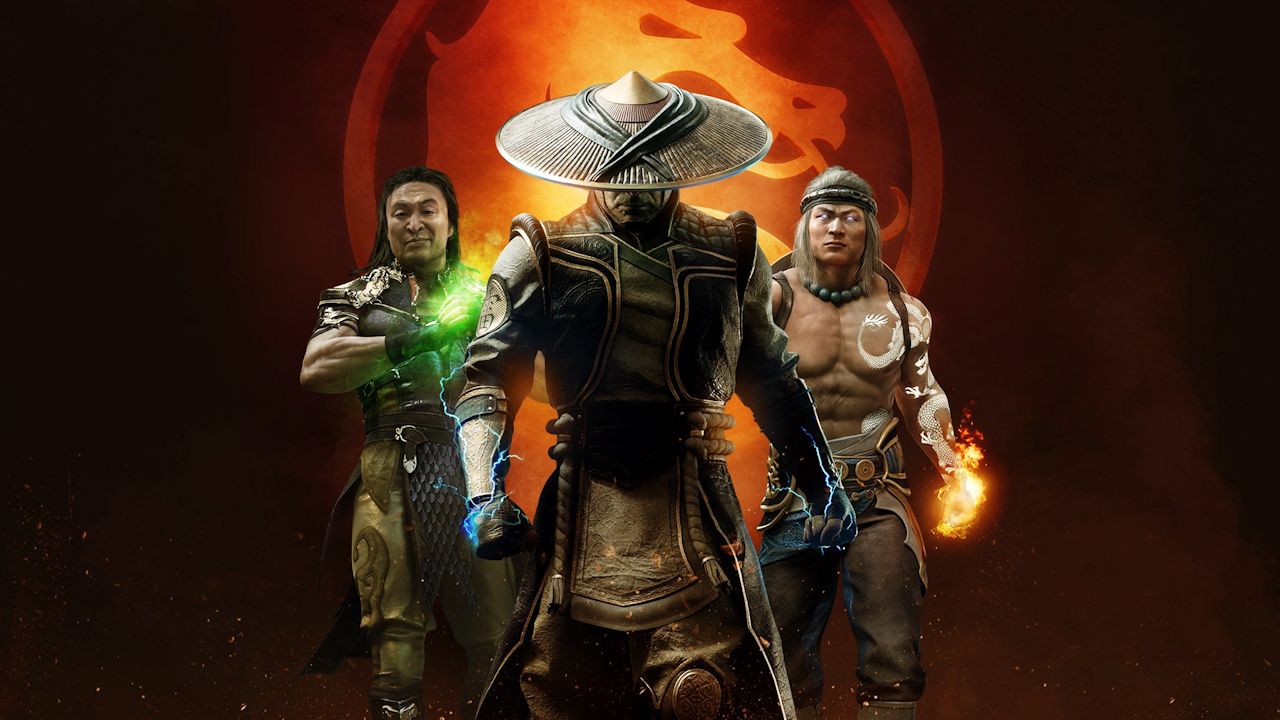 Mortal Kombat has seen a strong resurgence over the last decade or so after three standout games that have told a story that was seemingly concluded in last year’s Mortal Kombat 11. The game had already received six DLC characters since release, but NetherRealm and Ed Boon weren’t content with stopping there. Instead, they have added yet another three characters as well as a brand new story expansion under the umbrella of Mortal Kombat 11: Aftermath.

NetherRealm Studios has been known to be one of the best in the business at crafting a compelling story within a fighting game structure, which is not the easiest of things to do in the first place. The captivating characters and the top tier facial animations alongside them made the Mortal Kombat 11 story one of the best in the series, which ended with longtime series lead Liu Kang becoming a Fire God thanks to Raiden. This allowed him to conquer the new villain Kronika in battle and was left to architect a new timeline as the game ended. 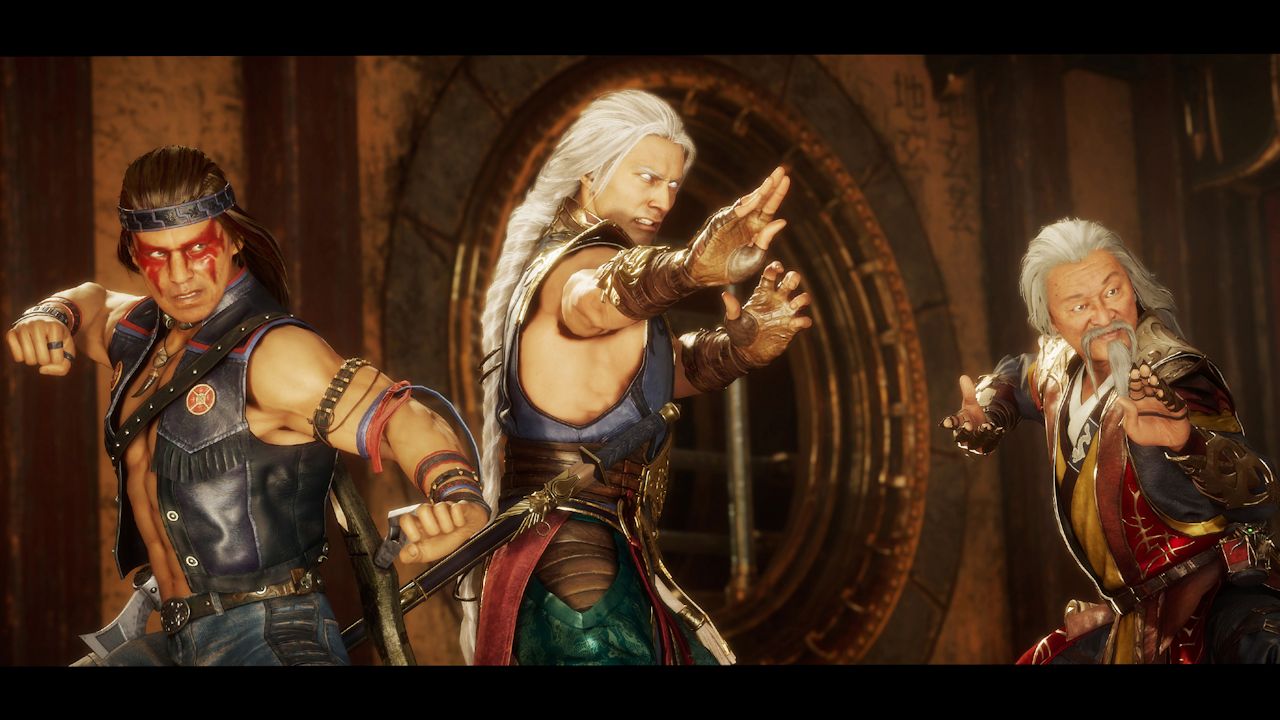 Mortal Kombat 11: Aftermath is a story expansion that takes place directly after that ending, where the trio of Shang Tsung, Nightwolf, and Fujin show up to stop Liu Kang from using his newfound powers before he could spell doom for them all. Shang Tsung reveals that Liu Kang also needs the helmet of Kronika that was previously destroyed to be able to shape a new timeline correctly, as doing so without the helmet would shatter the hourglass and ruin time forever. Having Shang Tsung actually having to play nice here was a fun antithesis to his usual schemes of realm domination. On top of that, getting so much content with Cary-Hiroyuki Tagawa from the original movie as Shang Tsung makes everything all the better.

The main point really for the Mortal Kombat 11: Aftermath is a showcase for the various Mortal Kombat related DLC characters. This means that characters like Joker and Spawn will not be involved, but instead the focus is placed on the other DLC characters for the game to date. This includes Shang Tsung, Nightwolf, and Sindel from the old DLC and then Fujin and Sheeva from the new batch. Each character gets their own chapter where you control that character in typically around five fights. Shao Kahn even gets thrown in there a bit too as an option for a few fights, as he falls in the grey area where he was technically not post-game DLC, but was a pre-order bonus that you have to purchase otherwise. 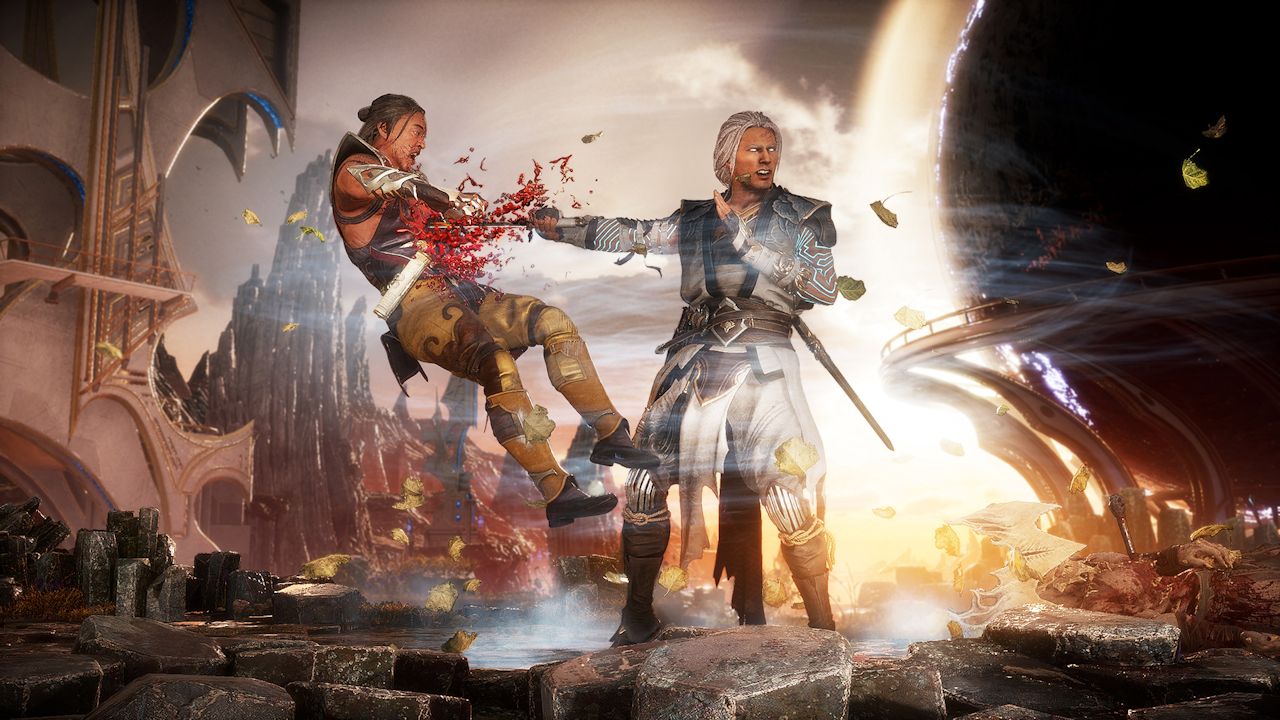 While sometimes story DLC can feel tacked on and unnecessary, Mortal Kombat 11: Aftermath actually feels like a perfect addendum to the original game due to the time travel nature already presented in the game prior. It manages to weave the DLC characters in with existing characters, though a lot of these fan favorites mostly stay in the background throughout. In the end, the story itself is not absolutely required to understand the story of Mortal Kombat 11 and likely the future of the series, but it’s a lot of fun and does end with more of a tease than the original did of what is to potentially come later.

Feels like a perfect addendum to the original game

Besides the story expansion, the Aftermath DLC for Mortal Kombat 11 also comes with three brand new characters. Fujin and Sheeva were already mentioned above, which are classic characters in the series that people definitely wanted to see return. It wouldn’t be a batch of modern Mortal Kombat character DLC without a third party character joining in on the fun, and this time it’s RoboCop’s turn. 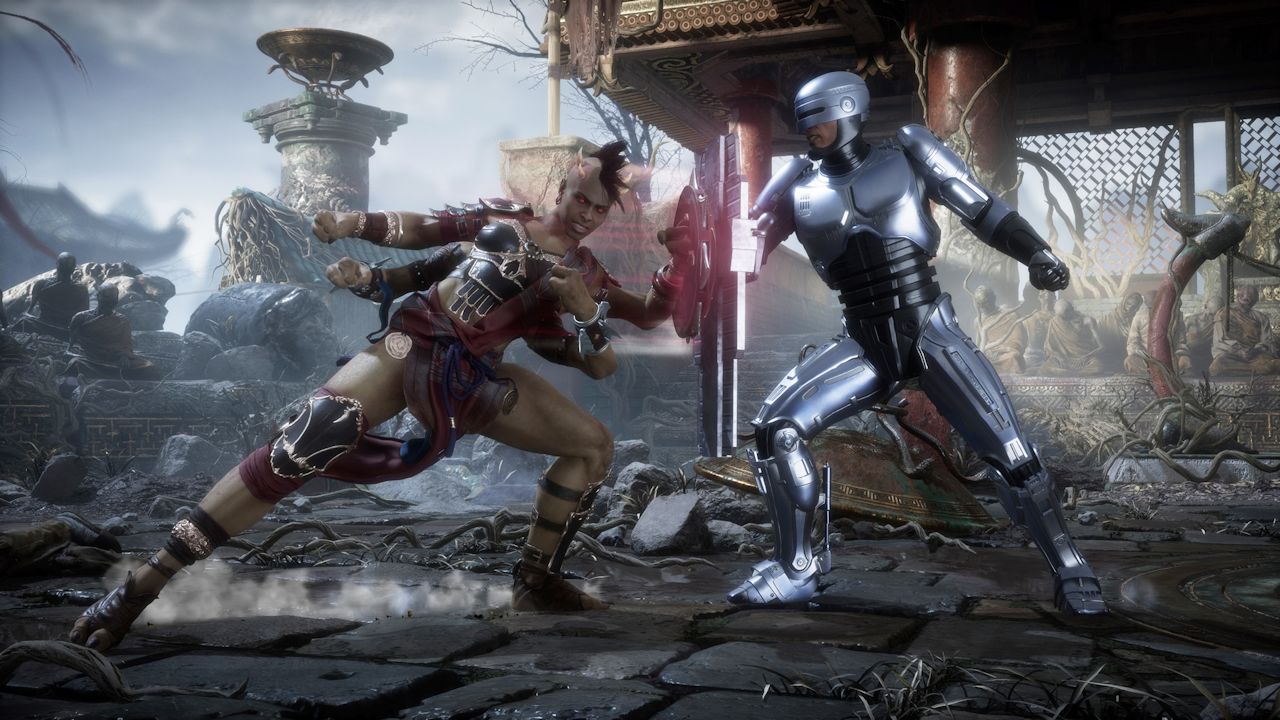 Fujin, the God of Wind and brother to Raiden, first made his playable debut back in Mortal Kombat 4. Even though it sounds like he would be a major character, he has only been playable in one other game between 4 and 11, that of Mortal Kombat Armageddon. Since his return in Mortal Kombat X as an NPC in the story mode, people have been hoping to see him get the love he deserves and NetherRealm definitely did him justice here. As the God of Wind, Fujin is essentially a living airbender, with control of all of the air around him. This allows for some really neat tornado based attacks where he can span the length of the stage in a matter of seconds. He also has a trusty crossbow and sword he can utilize as well, making him a pretty well rounded character. For someone with control of wind though, Fujin can feel a little slow and almost stiff at times when transitioning between attacks, so he will take a little getting used to at first.

Compared to Fujin, Sheeva has been playable a bit more often since her debut back in Mortal Kombat 3, with her most recent playable appearance being only two games ago. Being a member of the same race of Goro, Sheeva has long been a fan favorite and she is still a lot of fun to use this time around. Sheeva’s four arms make her a force to be reckoned with in battle, as she can nearly rip players limbs apart with relative ease. For someone so big, she is also pretty fast and can make quick work of enemies in long combo strings. She always has her equivalent of a teleport move where she jumps up and stomps on the enemy, but this one continues to be a bit hit and miss in its actual execution. Considering this game didn’t even have Goro playable at all, the addition of Sheeva is all the better and helps to add value to this DLC expansion. 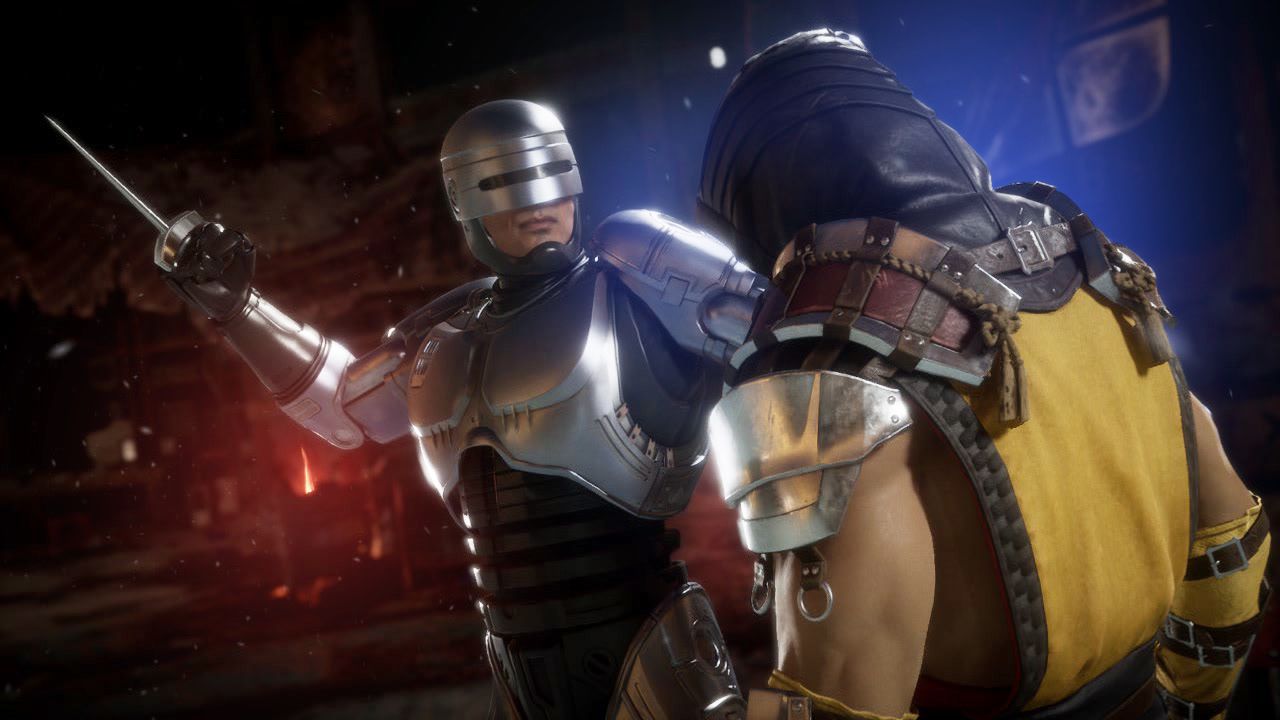 NetherRealm Studios has been one of the best in the business at bringing in third party crossover characters across the last few entries dating back to Freddy Krueger in Mortal Kombat 9. Mortal Kombat 11 has already added third party characters like Joker, Spawn, and Terminator as playable characters, which makes the final character of RoboCop a perfect fit for the roster. Not only did they add RoboCop, but they got Peter Weller back to voice him here as well for the authentic experience. Just having RoboCop in the game would have been good enough, but he’s also a ton of fun to play as. RoboCop is definitely a slower character, which is exactly as he should be, but can also deal massive damage very quickly. Besides being equipped with his gun, he also has an assault cannon and flamethrower that can tear through enemies. Not only is RoboCop a great addition on his own, but now players can finally have that long awaited matchup between RoboCop and the Terminator after all these years.

Mortal Kombat 11 bucks the trend of no story DLC after release for the Mortal Kombat series with the Aftermath expansion. Focusing on both the old and new DLC characters within the story was a fantastic decision, allowing the plot to feel fresh and worth playing through. Combining this with the three new characters of Fujin, Sheeva, and RoboCop, Mortal Kombat 11: Aftermath will undoubtedly have people returning to the game for many more hours of mayhem. This is not even to mention the free update that brought Friendships and new stages among other additions, so it’s certainly a great time to be a Mortal Kombat fan right now.

Already the king of the story mode in the fighting game genre, Mortal Kombat 11: Aftermath adds even more enjoyable content with a DLC character focused plot. Adding in three new DLC characters with Fujin, Sheeva, and RoboCop only sweetens the pot in this must own package that all Mortal Kombat fans should experience.