EA Sports might have a monopoly on football video games created by their special licensing agreement with the NFL, but 2K Sports has a monopoly on the sport of basketball, through quality and innovation in their NBA 2K series. The game has long been a polished affair from a gameplay perspective, as iteration upon iteration of the 2K basketball franchise has produced one of the most life-like sports games on the market today. NBA 2K13 recently arrived on the Xbox 360, PlayStation 3 and PC and it’s safe to say that 2K hasn’t done anything to torpedo the franchise. It doesn’t necessarily bring a huge jump in quality from last year, but some noticeable additions and improved features headline the release to bring an ever better version of 2K basketball to market.

2K hasn’t struggled with gameplay in the NBA 2K series in recent years.  In fact, the success of the franchise has allowed the developers to innovate even further in the gameplay department.  A new and improved control scheme refines the “Isomotion” controls that were recently introduced to the franchise.  The changes are subtle and seem to have been tweaked more so than overhauled.  Dribble moves are now performed using the right stick, giving them a more fluid feel.  Click in the left trigger and you can transition from a quick dribble move to a pull-up jumper, lay-up, or dunk.  The result of incorporating all of these more life-like features is a game that looks and plays more like the real thing.  Over-dribbling and ball-hogging is certainly an easy way to turn the rock over, and players are forced to play a more realistic brand of basketball than in games past. This isn’t a new revelation for the franchise as this push started a few years ago, but 2K13 continues down this higher caliber simulation brand of basketball. Most of the real additions come in the form of features and game modes in 2K13. My Player has been enhanced to include a virtual currency which is earned for completing actions across any of the modes in the game. Playing online matches, pick-up games on the blacktop, team-Up modes, and others, you’ll earn virtual currency that can be used for a number of different things. You can use it to outfit your player, partake in Legends training camps with Hall of Fame ballers, or purchase skill points and player upgrades that are wide ranging. Player upgrades allow you to upgrade attributes that’ll help make your player perform better on the court. There’s also a new signature skills upgrade section which allows you to upgrade your player with more specific skills. These range from dunking style to ball handling style and many attributes in-between.

Once again, NBA 2K13 features one of the most robust online careers in sports games. Jumping in an online Association allows players to become the GM for an NBA team, taking care of everything from team finances to on-floor strategy. Playing multi-year seasons will allow you to build a franchise from the ground-up, while managing every detail of the organization. Rivaling even the deepest of franchise modes found in other sports titles, The Association is once again the crown jewel in NBA 2K13’s robust package. The Association mode can be played offline as well, so if you don’t want to join one of the public or private leagues available on 2K servers, there’s always the CPU to take on.

For those that don’t have time for the all-encompassing online franchises and career modes, NBA 2K13 has plenty to offer for the part-time baller as well. Standard exhibition matches will let you get in and see how the game plays, with 2K recommending match-ups through its NBA Today features. These keep you up to date with current real-world league news and match-ups. Going online, there are numerous quick match options that’ll allow you to test your mettle against the NBA 2K Community, or join with others to Team Up in random NBA match-ups. Crew mode is a notable absence in NBA 2K13, but there’s no denying that the ambitious mode was broken at best in previous efforts by the development team. There’s been a lot of progress made on the online front which leads to a more seamless experience. Less dropped games and easier connections for the team-up features are noticeable immediately, but there are less features as a result. Hopefully in years to come, some of these popular fan favorites will return, and in working form.

Before EA even gets the chance to put out their basketball effort in the new and improved NBA Live franchise, 2K is pre-emptively striking with their My Team features. An idea that was snagged from the Ultimate Team modes that are featured in most EA Sports titles. Buying card packs and earning currency to purchase players on the open market is the basis for the My Team mode. It’s got a structure that’s very familiar to EA’s offerings and if you enjoy those addiciting modes in games like FIFA and Madden, you’ll certainly appreciate its inclusion in 2K13. There are some tweaks to the formula obviously, in 2K’s version, player aquisition values fluctuate on a day-to-day basis depending on how the player is performing in real-life. With an almost stock market quality, it’ll be interesting to see how the inagural season goes for My Team if a new player arrives on the scene this year.

Every sports title this year on the Xbox 360 has seen some value in adding Kinect functionality into the mix. Following a similar path, NBA 2K13 uses the Kinect’s voice recognition tech to give players a new layer of control with the motion controller enabled. The Kinect allows for play calling from a pre-determined set of plays. Setting up isolation for your star player, or calling for a pick and roll with your big man works quite well in the heat of the moment, instead of fumbling with the controller options. You can also call time outs, call for teammates to cut to the hoop, or call screens when trying to get open. Just about every option that is found in the on-the-fly menu can be accessed with the Kinect. These features are definitely easier to use than the traditional d-pad commands that offer the same functionality. 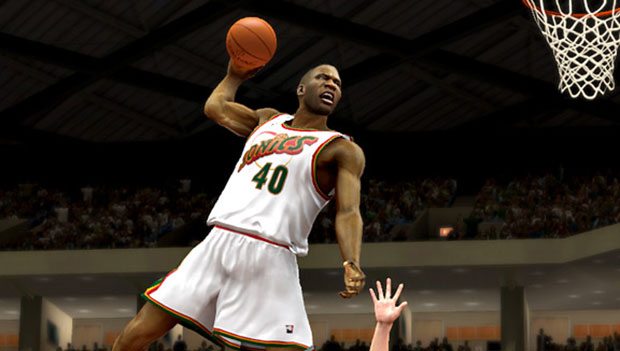 This year’s basketball title from 2K offers more gamplay refinement than it does revolutionary changes for the franchise. That doesn’t mean that 2K is resting on their laurels however. They’ve addressed some noticeable issues that previous games have had, and refined the online experience from a connectivity standpoint. Additional modes give even more ways to play, and game systems like Virtual Currency are introduced competently. There’s no competition out there for fans of virtual basketball to compare NBA 2K13 to, but that’s because the team at 2K has a level 3 ankle breaker perk equipped that’s stopping them in their tracks.