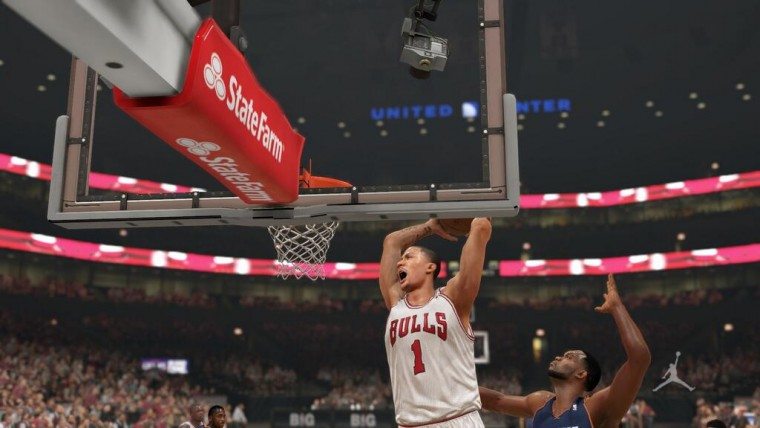 2K Sports kicks off the next generation of their NBA 2K series with a bang in NBA 2K14. Seemingly incontent to take the easy way out on the Xbox One and PS4, they’ve upped the ante when it comes to the most realistic basketball experience on the market. Maybe it was the increased competition from EA Sports and the NBA Live series, or maybe they just wanted to set a high bar for the start of the generation, but fans of the franchise, and early adopters of the PlayStation 4 and Xbox One are definitely in for a visual treat.

Basketball being an emotional sport, technology held back 2K from really exploring this facet of the game. They’ve been making great looking games for almost the entirety of the previous generation, but none of them hit the same emotional pitch that a single game of NBA 2K14 on next-gen consoles can. Players are more lifelike, they’ve got more personality, they look more like themselves. They’ve got the signature moves and styles that let you identify them with ease. They make emotional responses to actions on the court, and this game is a stickler for the finer details. When you couple these more realistic players on the court, and an improved presentation, you get a better basketball game across nearly every game mode. 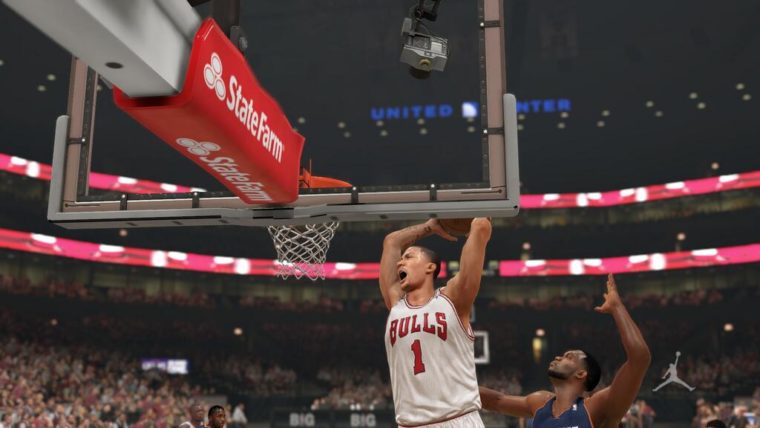 So does it really look like the beautiful screenshots that have been shown leading up to release? Yes. It really does look amazing. Player details and models, and the range of emotions that they can express is unparralled. It’s of a level that we’ve never seen before, and rightfully so. These new consoles are far more powerful than their predecessors, and it’s nice to see 2K making good use of the added horsepower. We only get to see this type of leap in these realistic type of graphics once in a great while, and NBA 2K14 is that game in the sports genre. It signals a promising start for the next-generation of sports games, and what we should expect them to look and play like. If things are only going to get better from here, 2K has indeed set a high bar for themselves in terms of graphics and presentation.

The enhanced visuals are soundly supported by the best-in-class gameplay that’s made 2K the first choice (the only choice for a few years now) of basketball fans. This aspect of the game has not been overhauled. It’s the same control scheme from its last gen siblings, and it’s hard to find too many faults, even if it seems like 2K can’t quite make up their mind on a number of the control aspects for the game. NBA 2K14 is a paced to real life basketball game. While it’s grown up from its arcade-like roots, it’s a game that relies on smart players making smart choices. Finding team chemistry, making the extra pass, boxing out for a better chance at rebounds — NBA 2K14 expects you to play the game the way it was meant to be played. The NBA 2K series has become the most realistic game on the market for its attention to details in not only what you can see, but what you do with the controller in-hand.

Gameplay is still not perfect. NBA 2K14 is not a 1:1 replica of real life, but it’s getting awfully close to feeling like the real thing. It’s got some moments of awkwardness on the court at times that can break the immersion, but the good outweighs the bad in tons, not pounds. Unfortunately, the good outweighing the bad is only in the gameplay and enhanced graphics of the game. While it’s near perfect in that regard, compelling modes to showcase this next-gen power are few and far between. Stacking this game up against its counterparts on the last-gen consoles, 2K comes up short.

NBA 2K14 on the PS4 is not the same game that it is on the PlayStation 3 and Xbox 360. 2K Strips some of the modes for this next-gen affair, like Lebron’s Path to Greatness and the Crews features. But did you really want to play through the Lebron James mode again? The absence of Crews is one of the biggest disappointments in this version of the game, but there are plenty of other omissions in the game modes and features set to get angry with. 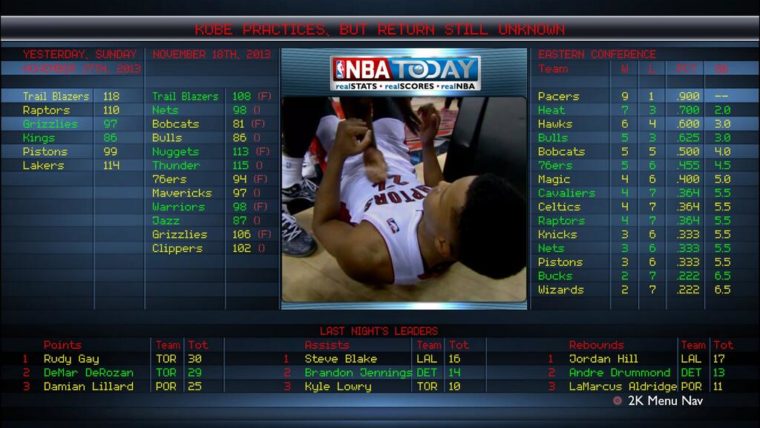 The game is definitely more streamlined when it comes to what it does offer, breaking down modes into four categories at the home screen. The most familiar modes will be found in the game’s NBA Today Menu. Here you get a heavy dose of everything that’s going on in the NBA in real life. Stats, scores, leaders and more. If you’re an NBA fan, this is a great way to keep up with the goings on of the league on daily basis. But inside of this stat layering are a number of different game modes that include the online offerings, quick games, and leagues. You can team-up with other players in quick matches for five-on-five gameplay that has each player controlling a single man. You can head into a quick match for a one-on-one experience, or you can invite friends to play as well, in either the one-on-one or team-up gamemodes. These modes are pretty much mandatory. They’re in just about every game, and where crews expanded on the team-up concept, without it, we’re left with a less fulfilling experience on this front.

Where some fans are going to be a little bit angry, is in the barebones offering in Online leagues and general lack of compelling modes to play. Where previous games in the series (including the current games on Xbox 360 and PS3) gave commissioners way more power to set up options in these online fantasy leagues, 2K14 on the PS4 lacks this. There’s no option to draft your teams, and customization is very limited. Those making the transition from last-gen to PS4 or Xbox One will see a lot of popular features no where to be found. What makes matters worse in the lack of some of these popular features, is that there is a lot of completely useless content in the game as well. A Sprite Blacktop mode with cringe-worthy narration is probably something that could’ve been done without. I know if you ask some fans, some of the offline modes could have been done without as well. There’s no longer a practice mode, no association mode, no crews, and some of this popular content would have given the game a lot more longevity.

The other modes like My Career and My GM didn’t really hit home for me. These game modes feel like bad reality television, where you control either the path of a player trying to break into the NBA, or a GM who is trying to lead his team to victory. It’s not that they are bad modes, because there’s plenty of meat for the offline simulation players out there. But you’ll really need to put up with a bunch of corny dialogue as you progress through games that are essentially testing your skills against the computer. It really depends on how heavily you value the single player solitary experience in NBA 2K games. If you love that sort of stuff, NBA 2K14 might be your Mecca of Basketball RPGs.

And like the Ultimate Team modes that are found in the EA Sports titles, NBA 2K14 does let you build an ultimate team in the My Team mode. Here, you can tackle numerous challenges on your way to earning packs of cards to improve your team in the process. I found this to be far more fun than the GM and Player modes, if just for the collector’s aspect of it, but mileage is going to vary depending on personal preference. My personal preference was in the NBA Today modes. The online connected experience that allowed me to connect with other players, was a more enticing option. Unfortunately, there just isn’t very much content on that front to keep you engaged.

Tying everything about NBA 2K14 together is a revamped VC currency system.  And like just about every launch game for the next-gen consoles, it’s similar to what you would find in a free to play game on Facebook.  It has you grinding through your $60 purchase for tiny upgrades to your character.  Obviously, in hopes that you purchase currency from 2K Sports instead of wasting your time.  The free to play roots that this model comes from is just as egregious here as it is in games designed solely as free-to-play experiences.   The big difference here, is that you actually have to pay upfront, full price, for the ability to pay them more money.  It’s ridiculous, greedy, and frankly, something that’s going to need to be reanalyzed by not just 2K Sports, but the industry at large.

There’s no doubt that NBA 2K14 is a great looking game on the PS4. It’s by far the best we’ve ever seen from Visual Concepts. It makes for a more believable on-screen affair, but the lack of game modes and online features is worrying as to how long the fun will last. You could argue the case that NBA 2K14 is worth picking up just to see these next-gen graphics in action, but if you’re a longtime fan of the series, you aren’t going to be able to overlook some of the content that didn’t make it into this version of the game.