The latest news in the world of video games at Attack of the Fanboy
September 11th, 2017 by William Schwartz 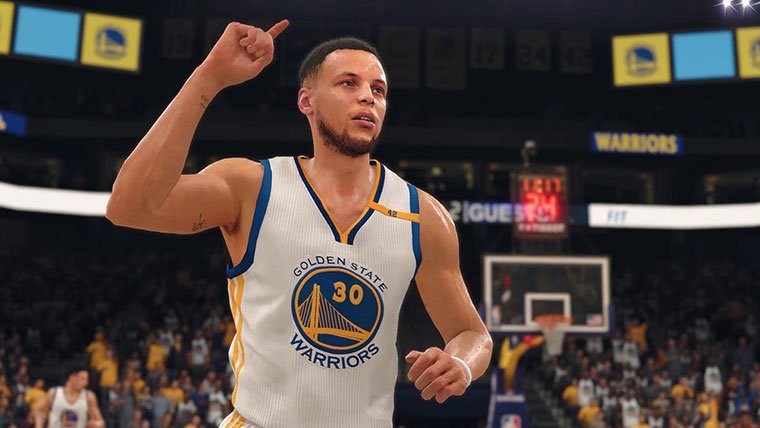 The NBA Live series has been in a state of disarray over the last seven or so years.  While EA Sports largely dominates with other sports titles like Madden Football, FIFA, NHL, and others, they’ve yet to release something that is even close to the same level of quality that you’ll find across the aisle in NBA 2K.  This might be the year where EA has found their own identity, offering up a package that plays well, looks good, and is feature rich — With these three things coming together to form a basketball game that’s actually fun to play and worthy of a purchase for hoops fans.  EA Sports has not done this in recent years.  Since the cancellation of one of the Live games mid-release back in 2010 and then the delay of last year’s game, EA Sports has not seemed proud of the series.   So much so that they’ve taken precautionary measures to not damage the long-running brand even further than it already has been.

With last year’s game being delayed and then pretty much rolled into this year’s game, EA has had two years to work on NBA Live 18. Perhaps the delay/cancellation/extra time was a good thing.  While NBA Live 18 isn’t quite NBA 2K — visually, it’s on par.  There are huge improvements across the board in terms of visuals between NBA Live 16 and this year’s game.  Player models are far more realistic. Animations and player specific traits and abilities look realistic and comparable to their real life counterparts.  On the gameplay front, I think EA has found an identity if arcade style basketball is what they were shooting for.  Instead of the increasingly complex gameplay that NBA 2K offers, NBA Live 18 has a far less steep learning curve.  This gives players of any level of familiarity with the series the ability to jump right in and have a good time. 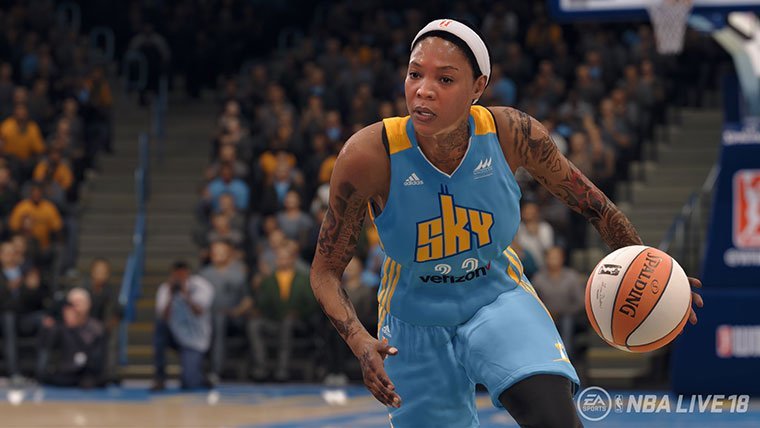 Across all of its game modes and difficulty levels NBA Live 18 really stays true to an arcade style of gameplay.  The game doesn’t penalize its players for making bad decisions, taking poor shots, or having fun with and figuring out the game’s systems.  On one hand, the results are spectacular.  You’re taking and making bad shots, performing drives to the hoop and finishes at the basket that are unrealistic, making contested shots after long dribbling displays, the only basketball laws that NBA Live adheres to are that of gravity.  On the other, you have a game that sim-enthusiasts will pan.  It’s something that 2K fans will be unfamiliar with as that game rewards players who understand the game of basketball a little more.

Many of the gameplay systems are still in place from NBA Live 16.  There hasn’t been a complete overhaul here.  You’re still using the right stick for dribbling, making crossover moves and drives to the basket.  You can still choose to shoot with the stick to perform numerous types of shots, or you can use the face buttons of the controller which will prompt you with a familiar shot meter.  This meter changes in color as your players heat up or cool down.  A defensive mechanic has been introduced that allows you to lock onto players, picking a side while guarding them to stay in front of the player and not allow them to drive to the hoop.  A white arrow will change to either green or red when a player is trying to get around you and if you can keep the arrow in the green you’ll stay in front of them and impede there progress.  Running plays and ball movement isn’t NBA Live’s strength, but it’s certainly an option.  You can call from a variety of plays on the fly from simple pick and rolls, to isos,  quick cuts and more. 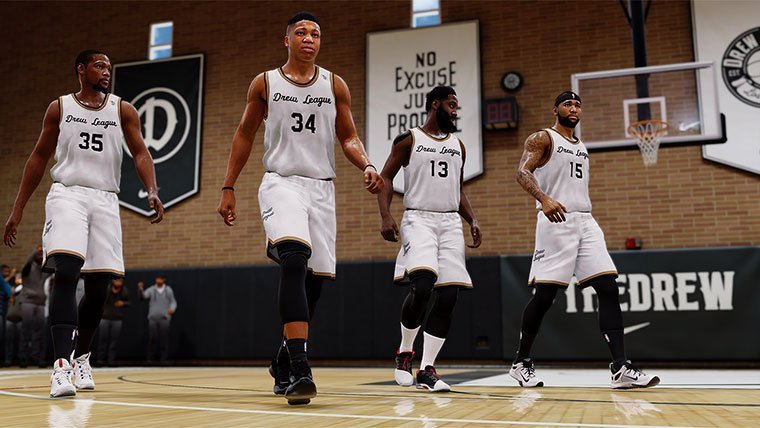 On the feature side, there’s a good bit to do in NBA Live 18, including a first for any basketball game with the inclusion of the WNBA.  This is certainly not the highlight of the game, but this inclusionary mode is well done but limited to quick play only.  The most touted feature of the game is the new RPG-lite experience called “The One.”  Similar to other create-a-player and take them to the pros modes, The One does just that.  It allows you to create a player, assign them attributes and then take them through a journey to the NBA.  Unlike NBA2K’s My Player mode, The One isn’t as much of a grind as there’s no microtransactions tied to it.  Like the other modes of the game, you’ll get in and start having fun with this mode and your created player right away.  You can tackle a variety of modes within The One.  There are Pro-Am tournaments that you can participate in that take you to famous parks and schools across the country.  EA does a commendable job in giving a little bit of history lesson for hoops fans.  Explaining the backstory for historic parks and courts like The Drew, Rucker Park, Venice Beach, and others.  The NBA side of the game allows you to take your player through a career journey.  Playing just the parts of the game that you’re included in.  You’ll start out on the bench and eventually work your way to greatness.  There are five slots for different characters, so you can essentially make a player for every position.

No matter which mode in The One that you’re playing, you’re constantly earning XP that goes toward leveling your character.  This includes an unlockable set of attributes that you can increase as you wish, with some allowing you to pick traits from NBA players themselves.  For example you can earn Steph Curry’s handles or Damian Lillard’s mid-range jumper.  Like NBA2K this mode allows you to customize your player in a number of ways, purchasing loot boxes that have cosmetic items.  This mode doesn’t give you the opportunity to purchase this content through microtransactions at all, oddly enough.  Online modes also allow you to take your created character into different modes against other players. 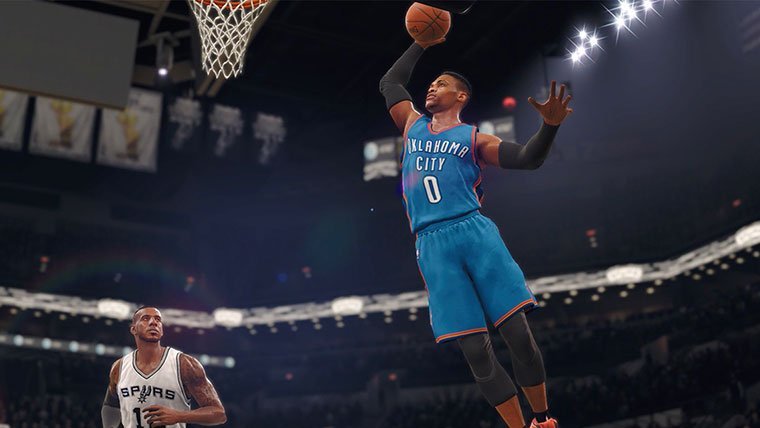 The staple of all EA Sports titles, Ultimate Team, is definitely one the big modes of NBA Live 18.  “LUT” is very familiar to other the Ultimate Team modes that you’ll find across the EA Sports games.  You’ll tackle challenges to earn coins and card packs to build a team of players that you can use to play against the computer or against human opponents.  All of the features that this mode contains in other EA Sports games are here.  This includes things like an auction house, a pack marketplace, and the ability to bolster your team through microtransactions.  EA starts you off with a few easy challenges to get some good starting cards and get your feet wet, but as you progress you’ll need to play an awful lot of the game to keep your team stacked full of good players and contracts to keep them around.  There are almost 150 challenges to take on versus the computer that are themed in various ways.  Online head to head in LUT is where most people will end up eventually.

For Franchise fans NBA Live 18 is a little lacking.  If only for the fact that they do not include an online franchise mode to compete against players.  Instead this mode relegates you to playing against the computer only.  Aside from that, it’s a fairly standard mode.  Franchise mode allows players to pick their favorite team and handle the GM duties as well as play in the games.  You’ll be handling things like trades, free agent signings, salary cap space, and other standard franchise aspects.  One good thing about this mode is that it allows you to “Play the Moment” in any game.  You can simulate through games to spots where you might want to step in and play, it’s an interesting addition that allows you to have a hybrid of simulating games and bypassing the tedium of having to play an entire season.  The only real knock you can give franchise mode is in the fact that it doesn’t have an online option. 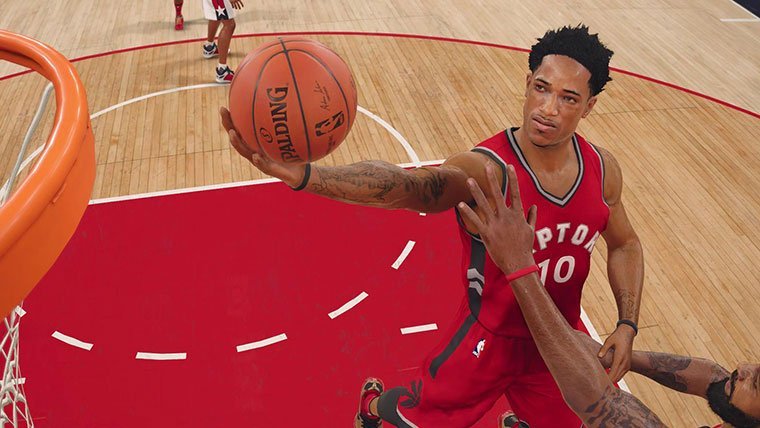 Of course there are other ways to play NBA Live 18 that involve a little less commitment.  Play Now modes against the computer exist for both the NBA and the WNBA.  This will set you up for a quick game against the computer, with numerous difficulty settings a sliders to tinker with.  Online head to head will pit you against other NBA Live players in a standard ranked match that features an online leaderboard.  There are some practice modes you can run as well, these include drills, shootarounds, 1v1 and 5v5 scrimmages.

One of the new additions to this year’s game include Live Events.  These are challenges that EA says will be updated throughout the season.  EA likens them to “Raids” that you would find in an MMORPG.  They include Pro-Am games, historical games, and legendary challenges.  This part of the game will feature characters, rules, legends, and teams that aren’t in any other part of the game.  This ties into The One mode in that conquering these challenges will give you reward crates.  The current launch objectives include a mixture of community member challenges that offer unique rewards and a cooperative challenge that has you taking on James Harden and Chris Paul for player specific gear that your character can use.

Feature rich, NBA Live 18 is a significant step forward for the franchise.  Player models look a lot more realistic this year whether on the court or in the many cutscenes found throughout the ESPN themed presentation.  The amount of enjoyment that you’ll get out the game really falls back on what type of basketball experience you’re looking for.  If you’re just looking for non-stop action, dunks, flashy moves, and highlight reel worthy moments, you’ll find that here.  Even the hardest difficulty levels that EA throws at its players are easily toppled by anyone that’s vaguely familiar with the systems of the game.  There are numerous sliders to be tinkered with, but out of the box, NBA Live 18 is arcade basketball game through and through.  It looks the part though, perhaps more than ever before, NBA Live is at least making an attempt at trying to close the quality gap between them and their closest competition.

The extra time that EA took with NBA Live 18 apparently turned out to be the for the best.  This is definitely the best game they’ve put out in a while, and they’ve built a solid foundation for the franchise moving forward.