Not a nervous wreck. 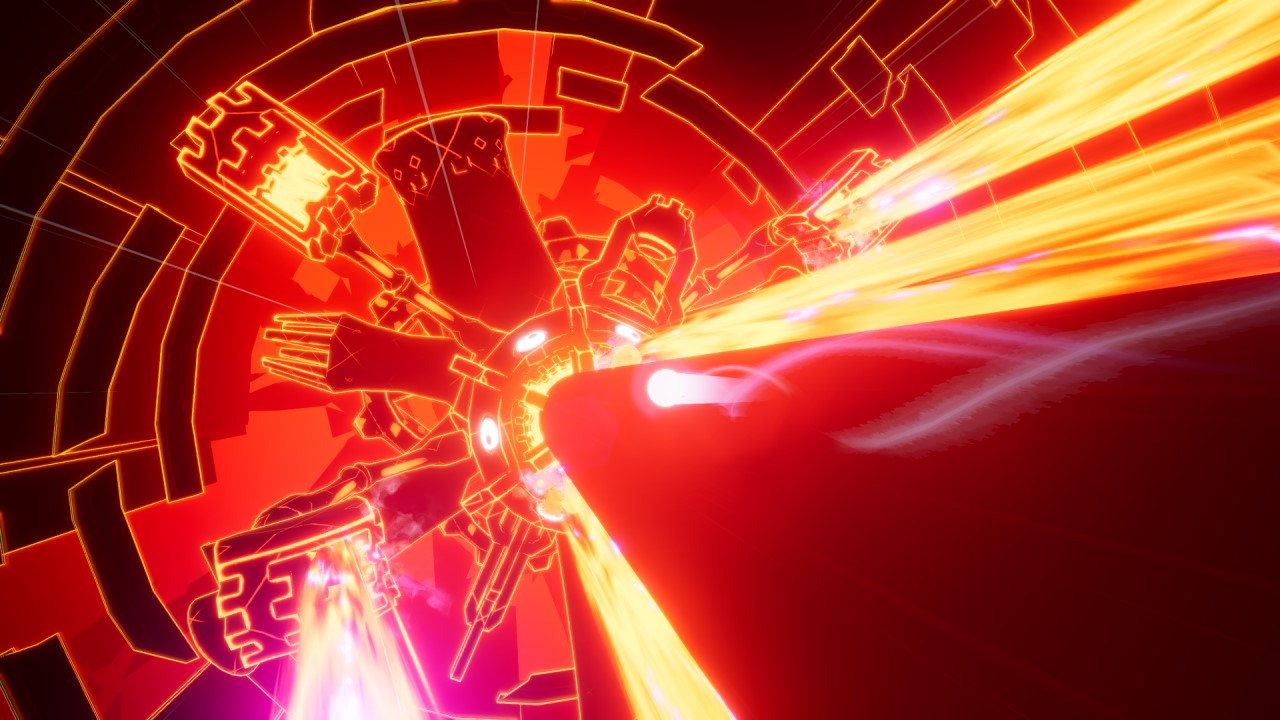 Nerve is what you’d get if you slammed Thumper and Super Meat Boy into a blender, then laced the resulting mush with a heavy dose of psychedelics. It’s a more sadistic Bit.Trip Runner, a neon-laced descent into madness, and – if I do say so myself – a pretty damn good video game. It could have been better – held back by some arbitrary spikes in difficulty, overlong boss battles, and a few bugs that cheapen the overall challenge – but the final product is worth playing if you’re a fan of white-knuckle, twitchy exercises in self-loathing.

Chase your fate in Nerve while avoiding obstacles and traps along the way.

Nerve is pretty basic in concept: you play as a glowing white orb hurtling down a giant cylinder, and you need to strafe left or right to avoid the various barriers and nefarious traps littered around it. There are ten world to overcome, each with ten levels, and a boss battle at the end of every single one of them. Anyone who’s played Thumper will feel right at home in Nerve, though it’s important to note Nerve is not a rhythm game.

There is a tempo and a pace to the obstacles that appear along the cylinder (mostly), so while Nerve’s flow may not be set to the beat of its pulsing drum-and-bass soundtrack there are plenty of patterns to learn and memorize if you wish to succeed. Every level and world in Nerve is timed, and you are ranked on your performance at the end of every last one of them. Throw in some leaderboards, and there’s an incentive to master each and every track.

This is done by utilizing a handful of tools in your glowing little orb’s kit. By default you can strafe left or right, boost forward, or brake and slowdown. It’s imperative to know when to speed up and when to fallback, since many of Nerve’s more dastardly traps punish the reckless. There are also three “skills” you’ll learn early-on in Nerve: Surge, Vault, and Focus.

You’ll need to use all three to bypass a majority of Nerve’s hurdles, and the game does a decent job easing you into the use cases of each. Surge projects forward a blast of energy that destroys “cracked” barriers and rebounds white projectiles, Vault allows you to leap over specific objects and remain airborne after the fact, and Focus slows time and doubles your turn speed. Since you’ll be dodging obstacles at rapid speeds in Nerve, all three are tied to (again, mostly) easy to read and parse challenges along the cylinder, so you’ll rarely wonder if an ability should be used or not.

For the first three worlds every aspect of Nerve clicks together wonderfully. The mostly monochromatic neon environments you blast through while barreling down the cylinder are gorgeous in a surreal, almost abstract manner. It’s like the team at Gunfish Games took a hit of acid and then wondered what the inside of a fiber optic cable looked like, then decided to set a game within the resulting hellscape. The soundtrack itself throbs with the constant crash of drums and synth driving you forward, ever tempting you to go faster and faster. I was enthralled with Nerve during those first few worlds, so you can imagine my disappointment to see some of Gunfish Games better ideas unspool in later sections of the game. 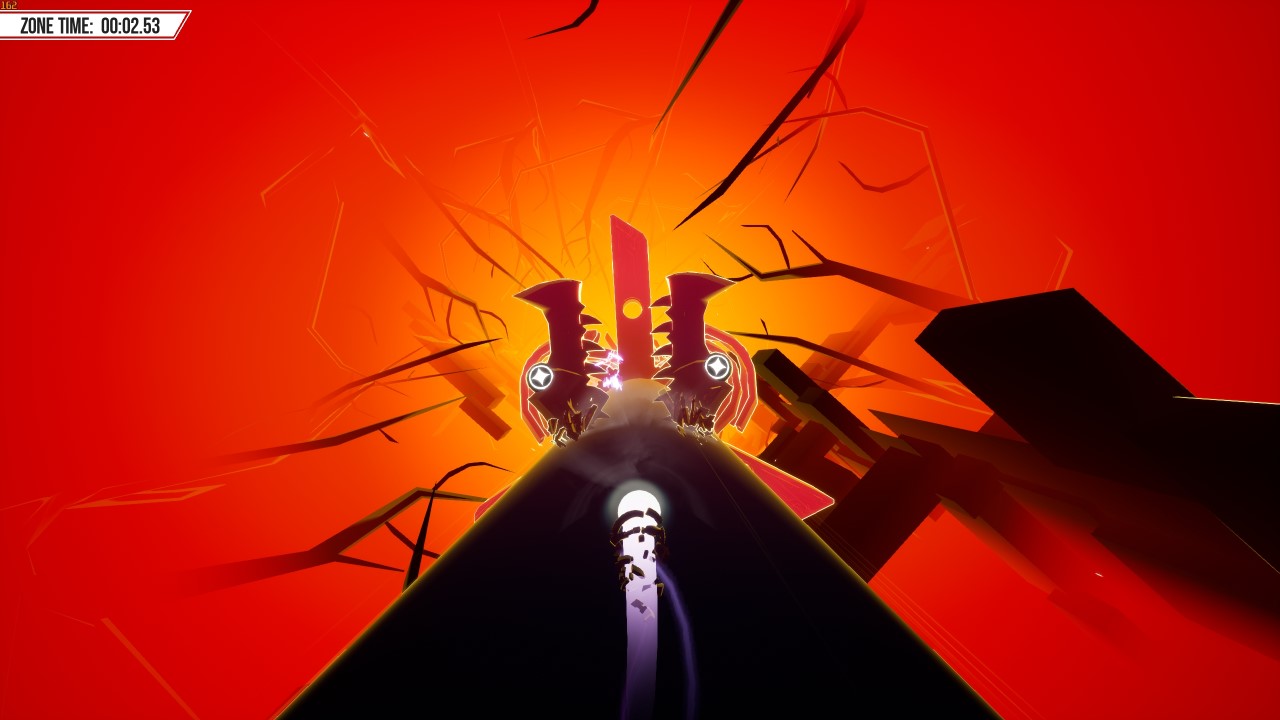 Not quite nerves of steel.

Worlds four through ten are not bad, but they suffer from a few problems that ultimately rob Nerve of greatness. The first issue that became apparent was a lack of overall consistency in difficulty after learning the Focus skill. Many of Nerve’s obstacles and traps are symmetrical in nature (you are rotating around a giant cylinder after all). The reason is simple: if you design a game where memorization and rapid reflexes are key to success, it behooves you to craft the challenges in a way that avoids randomization. Symmetry around the cylinder ensures that no matter which direction the player turns they’ll be confronted by a similar obstacle.

That’s largely the case in Nerve until the back half of the game, where some elements that enter the field begin to feel more and more random. Take the snare traps for example: they latch on to you after you pass through them, and you have to break to avoid them. The basic ones are simple in execution, and add an exciting new dynamic to the levels they’re featured in. Then there are the more advanced versions that create a wall after you brake and trigger them. The wall can have up to two openings, but how the snare trap unfurls and where those walls wind up being can often feel like a roll of the dice.

In a game where speedruns and leaderboards are a thing, having to brake and use focus to give myself a chance to pause and figure out where exactly the safe opening is smothers Nerve’s previously excellent flow and tempo, and the snare trap is not the only one of its lot to commit this crime. There are also new obstacles deployed along the cylinder as you race down it -many of which lacking a formal introduction – and even these can feel a bit randomized.

In theory many of the traps and obstacles do follow a pattern, just not always a discernable one. This is especially noticeable between deaths, when traps or obstacles seemingly appear in new locations, throwing off your previous memorization of the level. Since Nerve layers on trap after trap after trap as you progress, this sensation of randomness only worsens as you make it further down the cylinder.

In theory many of the traps and obstacles do follow a pattern, just not always a discernable one.

Even more annoying are the odd dips and spikes in difficulty in the back half of the game. Some worlds are a genuine mixed bag, rapidly oscillating between braindead simple levels and those that’ll leave you grinding your teeth in agitation. This issue with difficulty pacing is especially evident in the last two worlds, which mix together all the traps and special obstacles from previous worlds into one giant gauntlet of death. You can easily plow through one level, only to hit a brick wall in the next. This pacing issue disrupts Nerve’s “one more attempt” mantra, though it thankfully doesn’t always detract from it.

These are frustrating quirks, but they can be overcome. They’re infrequent enough to irritate and make the occasional death feel cheap, but they don’t entirely sabotage the experience. It’s a handful of bugs that come closer to derailing Nerve moreso than the random spikes in difficulty and odd traps that disrupt the game’s flow.

The most impactful bug affects how traps respawn between deaths. It’s not uncommon to get taken out by a seeker trap or snare trap, only to respawn and discover the trap followed you in death, ending you once more before you can even start your next run. Other times you’ll find yourself about to confront a trap that murdered you previously, only to notice it now has a twin. This unintended duplicate always triggers immediately, ensuring your demise whenever you see it on the cylinder. 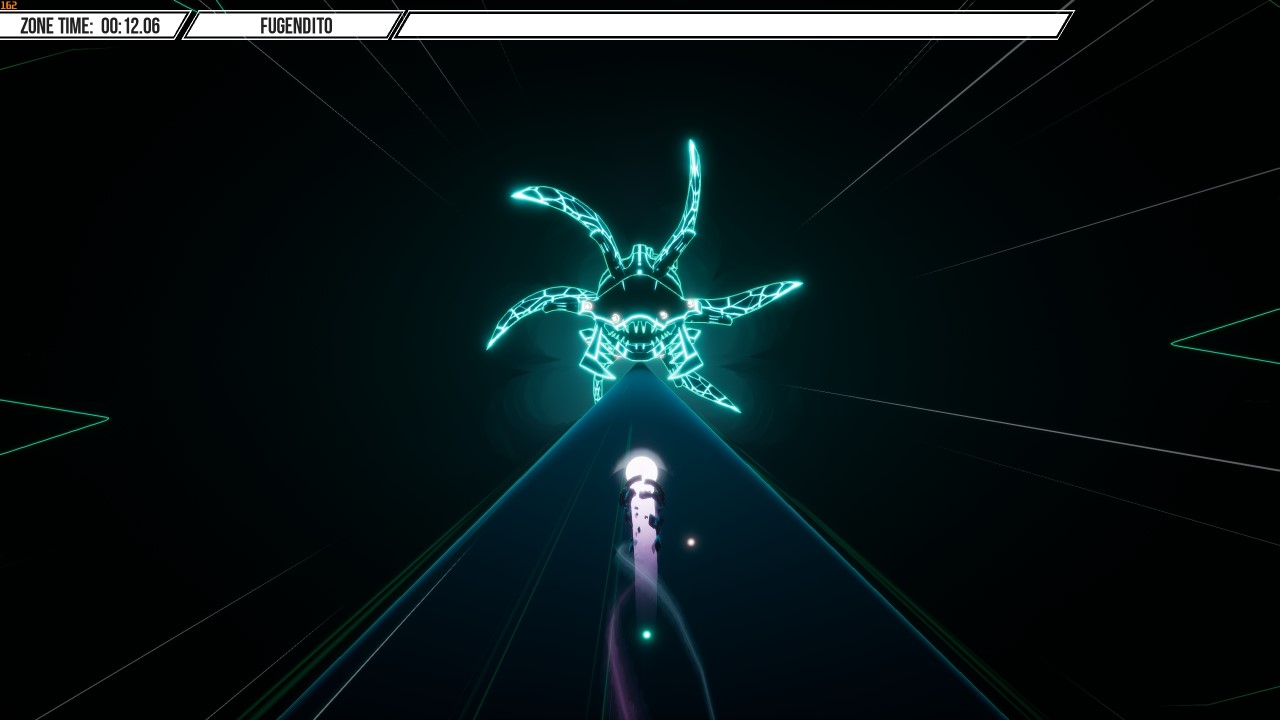 A smaller, yet equally annoying bug infests the Focus skill. Initially, I thought the seeker traps were broken: I’d enter Focus and strafe away as required, only to get smacked by an outstretched tendril. I’d trigger Focus the exact millisecond the seeker trap’s “attack” animation would go off, yet I’d still find myself getting struck by it even when halfway across the cylinder.

Turns out you can’t hit Focus and turn at the same time, otherwise A.) your “double turn speed” doesn’t activate for a few seconds, and B.) the seeker mine would fritz out and stumble through its animation, thus leading to the deadly limb tickling me to death. Once I figured out I needed to hold Focus and then turn my vessel the seeker mines (and other subsequent challenges that relied on smart Focus use) were no longer an issue, but it took me far, far too long to figure that solution out.

The last bug worth noting isn’t attached to Nerve’s gameplay, at least not directly. Since Nerve is not a rhythm game the music isn’t as critical to the experience as it is in a game like Thumber. That said, it frequently pops in and out for brief moments, notably in the back half of Nerve’s ten worlds. The audio mixing is also a bit of a mess: the music alters whenever you change your speed, and it shifts between levels and worlds, but it often sounds like the different layers are slamming together in an electronic cacophony. It’s a shame, since Nerve’s soundtrack is pretty darn decent. It’s not the best electronica I’ve ever heard, but as a fan of drum-and-bass I quite enjoyed it, when it was mixing appropriately that is.

Then there are the Gate Keeper boss battles, which are cool in theory, but drag on for far too long. I actually liked each boss initially (Fugendito was a particular favorite), but they all lasted longer than they needed to. It doesn’t help that there’s no clear way to tell when you’ve reached a checkpoint in the fight, a small detail that would go a long way in helping each battle feel less tedious. That last point isn’t a big deal in the grander scheme of things, but little markers in the boss’ healthbar would have gone a long way. That said, each is visually arresting in their own terrible manner, so cheers to whomever drew up these diabolical bastards. 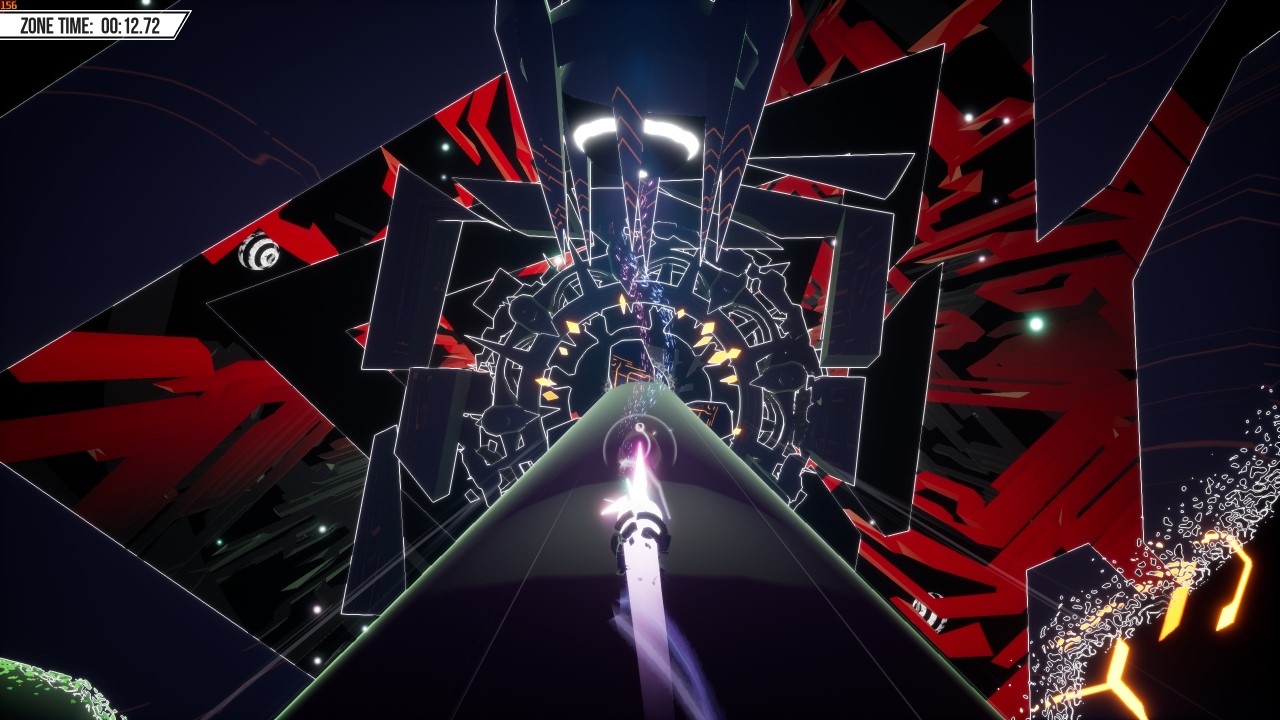 Overall, a small helping of issues are not enough to derail Nerve, though they do keep it from greatness. What’s on offer is worth playing if you’re a fan of games that encourage “one more attempt”, though there will be moments you’ll walk away more annoyed than satisfied. The lurid, psychedelic art style and pumping soundtrack nearly elevate Nerve to similar heights as its inspirations, but it’ll need a little more tuning under the hood before it reaches those same lofty precipices.

Still, what’s here is good enough to recommend, and Nerve is ultimately a delight to play when it’s firing on all cylinders. A sometimes frustrating and cheap delight, but in the end Nerve is worth the cost of admission. If you are a fan of challenging games that require memorization and sheer force of will to overcome, and are willing to overlook some annoying bugs and some weird spikes in difficulty, give Nerve a shot.