A solid port for a niche audience. 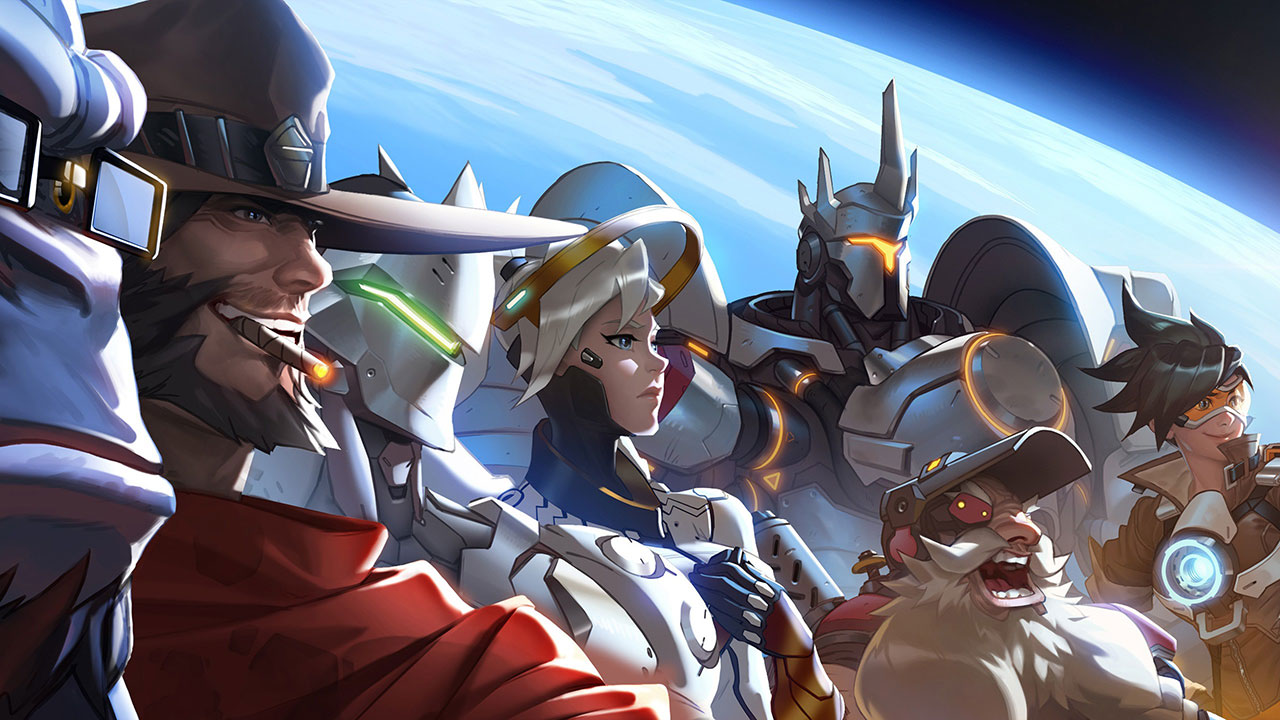 Overwatch for the Switch will be divisive: not because it’s a bad port, but because it begs the question, “who is this port for?” Hyper-competitive games have devout followings who will cry to the heavens that anything less than 60 frames per-second is blasphemy, and any sort of network hiccups are considered a death sentence. Overwatch is no exception, and after three and a-half years Blizzard’s competitive shooter has amassed a large, dedicated following. Who then is this port for? It’s an interesting quandary, and there are plenty of pros and cons weighing in. 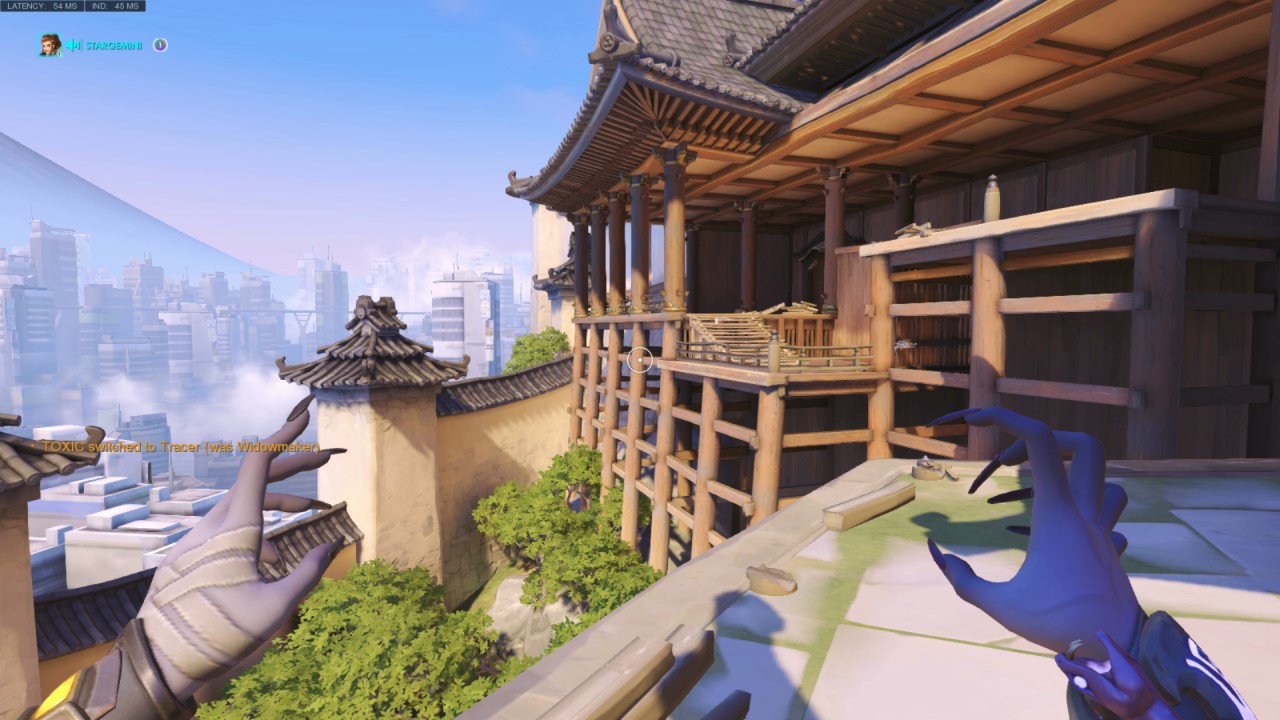 Overwatch on the Switch looks better than you assumed.

Let’s be honest with ourselves for a moment: we all want to know how the game looks and runs more than anything. The gameplay hasn’t been altered in any distinguishable way, so the majority of interested buyers want to know how well the game looks and runs. Thankfully, Blizzard’s shooter has always sported a rather clean, stylized look, and that art direction carries the Switch port.

Character models and textures do take an anticipated hit, considering the console’s pittance of available RAM, but it’s not near as bad as I expected going in. Sure, it’s not the prettiest, but Overwatch’s art design disguises the most glaring edits. As seen in the image above, environmental textures are still strong, if a bit blurry around the edges, and certain aspects of Moira’s banshee skin are reduced more than others: see the bandages on her left hand as compared to the snake on her right. Reflections are dialed back in the port as well, with metal showing a light gleam instead of a full dispersal of refracted light as seen in the PC and other console versions.

Dynamic shadows take the largest hit, with the edges being blocky and distorted, but in motion the reduction is barely perceptible. What you will notice is the texture loading for character and weapon models that can take upwards of thirty seconds to fully render. This is to be expected, considering the RAM and storage limitations in place, but it is the one deficiency that can’t be unseen. 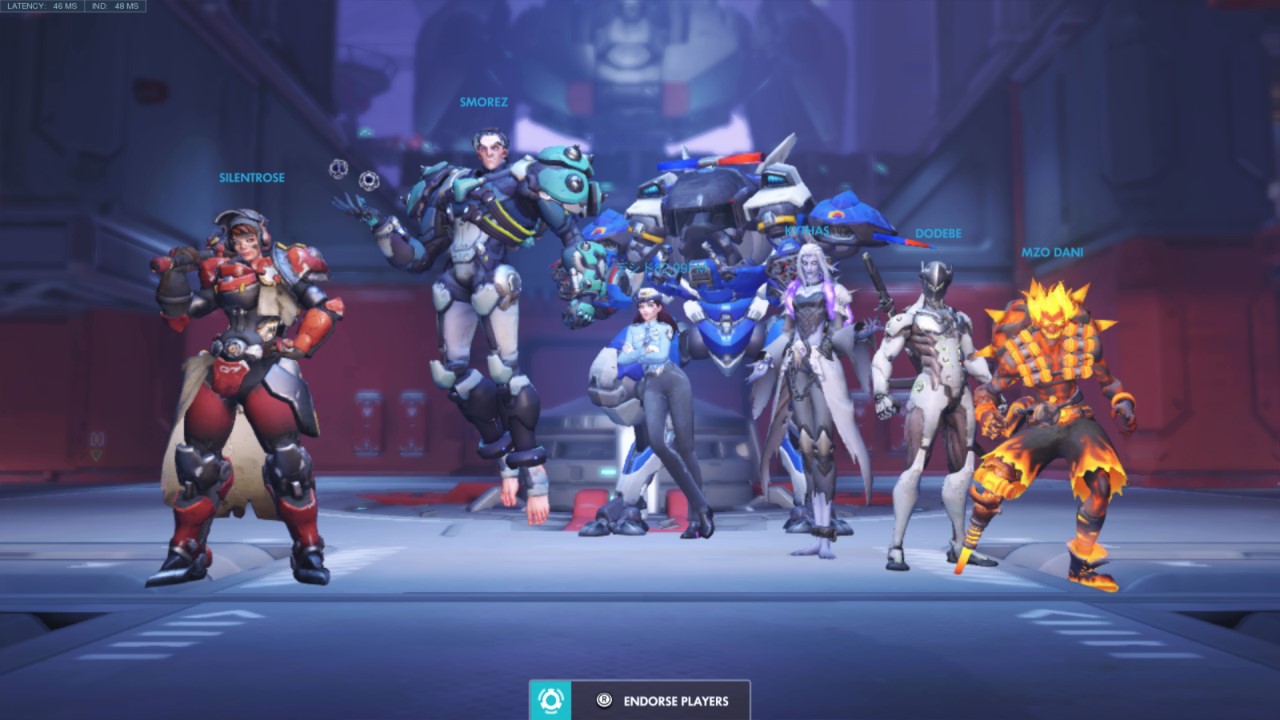 Characters can also take a while to load in to a match, replaced with glowing red orbs in their stead, but this isn’t exclusive to the Switch, with other consoles suffering the same. Characters tend to load in before a match starts, so it’s not a huge issue, but you will notice it.  Aside from that, handheld mode has anti-aliasing either severely reduced or removed outright. The smaller screen helps obfuscate the jagged edges on objects and characters alike, but when the game is not in motion it’s noticeable.

That all said, the locked 900p resolution for docked and 720p resolution for handheld keeps the game from looking like a fine layer of vaseline was rubbed over the whole experience as you play, with the majority of the game looking crisp and sharp. Muddier textures are certainly a thing, but when placed against the larger graphical tapestry Overwatch on the Switch looks surprisingly good when compared to other similar ports.

In my Halloween skins list I used screenshots from the Switch version, and while they may not be as good looking as the other console and PC variants, they still look great considering what the game is running on. It’s rather amazing what Blizzard and Iron Galaxy (who helped with this port) have pulled off on the graphical side of the equation, but a pretty game isn’t worth a damn if it doesn’t run well. 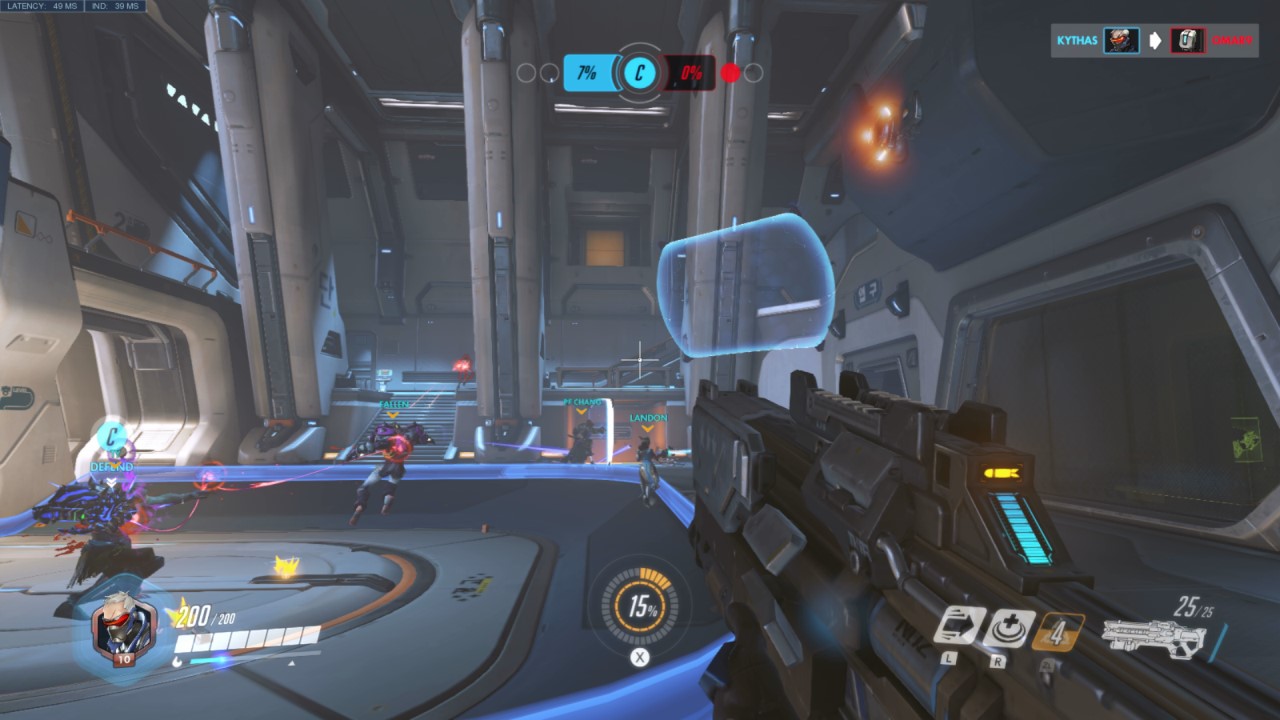 Performance is good, if you can stomach less than sixty-frames.

Here is where Overwatch on the Switch will polarize most fans: the game runs at a mostly solid 30 frames per-second, well below the PS4 and Xbox versions, and a far cry away from the ceilings a competent PC can reach. Hyper-competitive types will scoff at this, but in practice, the port has even frame-pacing and keeps at 30 frames the vast majority of the time. Giant team fights with ultimates going off left, right, and center do drop frames down to the mid-20’s as alpha effects bombard the screen, but these dips are infrequent and the framerate stabilizes rather quickly.

Handheld does run a hair smoother than docked – likely the result of the lower resolution and additional graphical cuts – but docked still runs admirably. I had to play a couple of matches in order to adjust (going down to 30 frames from 165 on my desktop took some acclimating), but once I got my feet under me I found Overwatch on the Switch to play rather smoothly.

It can be argued that the higher framerate is more beneficial in a competitive game like Overwatch, and I won’t disagree with that assessment. The game’s nearest competitor on the Switch runs at a solid 60 frames per-second, but with a dynamic resolution that can sometimes make the game look grainy. Yet, sitting down to play some Quick Play, Mayhem, or the currently active Junkenstein’s Revenge I didn’t feel I needed those extra frames to play well.

The addition of gyro controls does help once you get used to them, allowing fine-tuning of your aim (and it’s highly customizable, down to individual heroes). If gyro isn’t your thing you can turn it off, and the game doesn’t play dramatically different than the other console versions, framerate aside.

Considering Competitive Mode is locked as I write this, everyone is pretty much focused on Quick Play. Despite the lower framerate I had people going full sweaty on me, pulling off precision shots, agile jukes, and impressive multi-kills. Sure, a higher framerate makes all of these things easier to do, especially with a controller in hand, but it certainly wasn’t deterring most of the people I played against. Perhaps it was just all the PS4 and Xbox converts filing into the game, but at no point did I personally feel like I or anyone else were noticeably handicapped by the lower framerate. 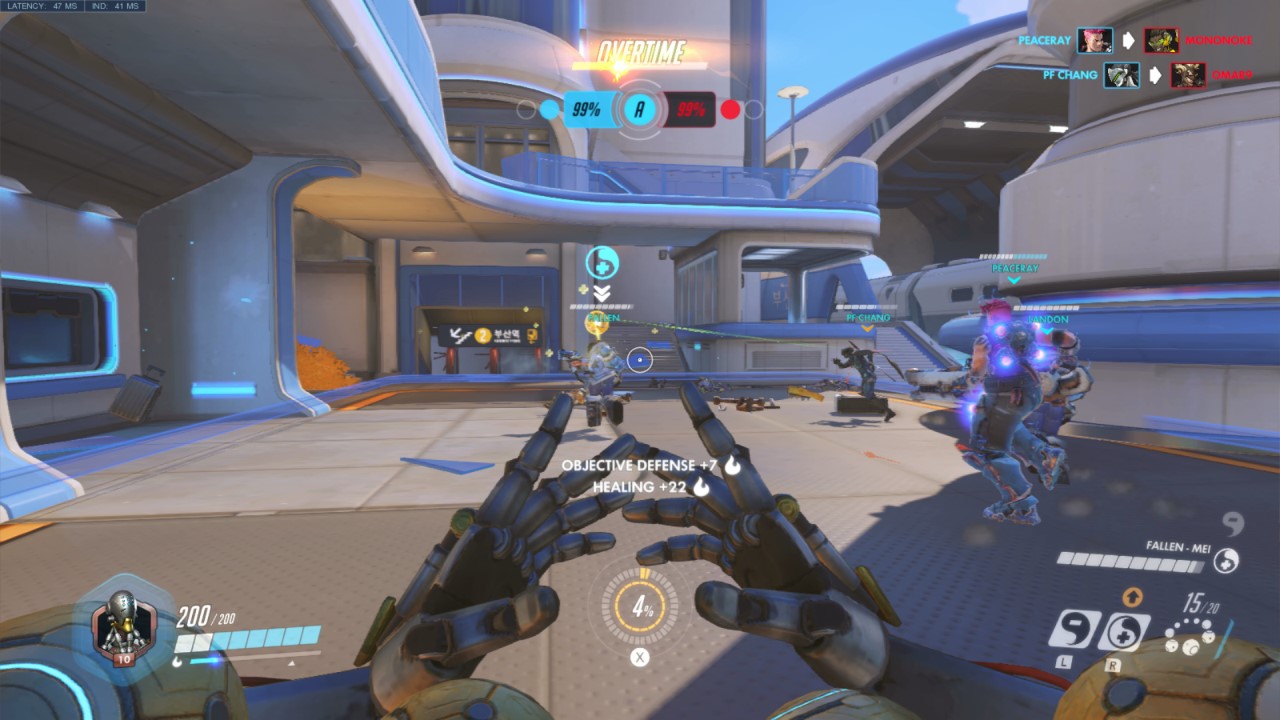 Server performance isn’t bad either, at least after the first day of launch. Initially, the game was a bit of a nightmare to play, with server lag going well out of its way to squander all the good first impressions the port makes. Shots would appear to hit but not register, you’d die despite having retreated and being well behind cover, and there was horrendous input lag; all the little connection issues that could occur did occur, and using the in-game latency tracker I would average well over 200ms. Considering I have gigabit internet, I knew something was off, and was experiencing similar issues when I swapped over to the PC version. The issues were not near as dramatic, but they were there.

Turns out the servers needed maintenance. Since then I’ve mostly stuck to 50ms latency in both handheld and docked, and haven’t had any issues I’d consider problematic. Shots are registering, people are not teleporting around: it works as it should. To be certain I wasn’t just benefiting from what is arguably a great internet connection, I went ahead and fired up my phone’s hotspot.

I don’t pay for the premium hotspot data, so I knew going in I’d be playing off of 3G speeds. As expected, I was running at 500 kbps both up and down, and my latency pushed up to 150ms, but I came away a touch surprised: despite the higher latency the game still ran well. I could count the amount of times I ran into a connection-based issue on one-hand: not bad when you consider portable play is a selling point and phone tethering will be common. For the hyper-competitive though, they’ll decry such performance as trash. 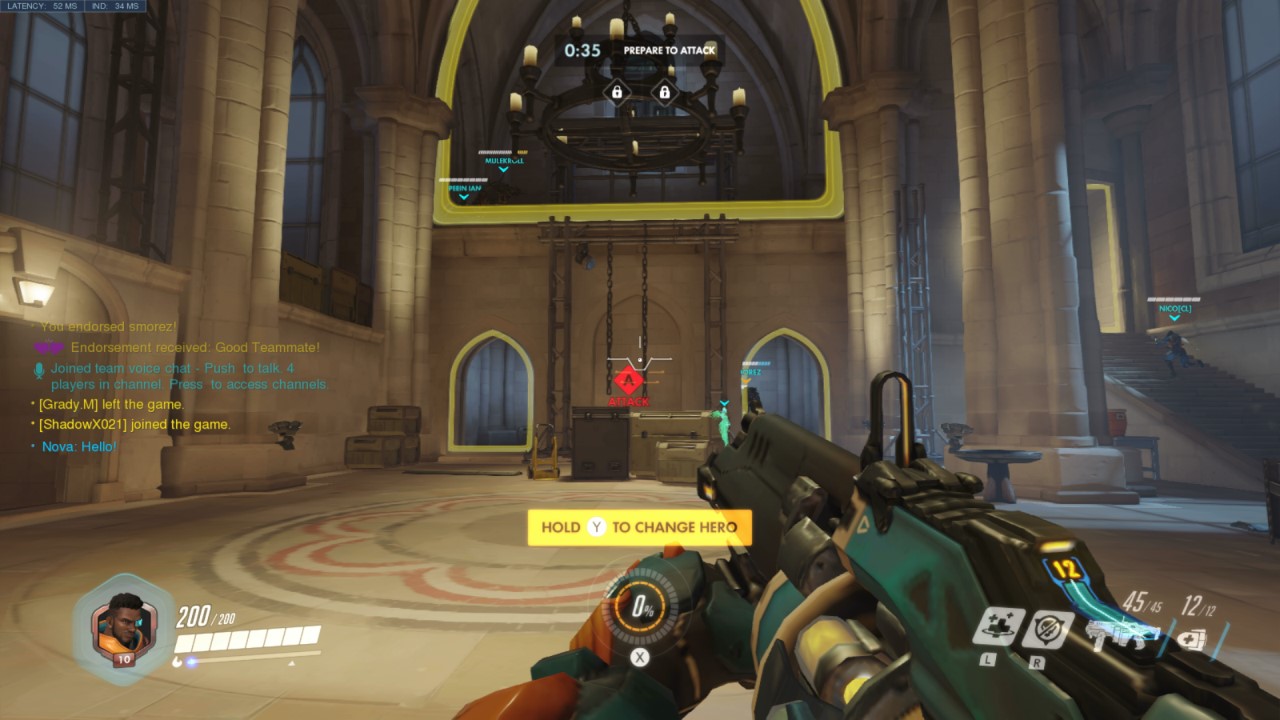 So who exactly is this port for?

Overwatch for the Switch is a pretty damn impressive technical showcase, but it’s also a port of a game that has been out for over three years. Overwatch fans have been playing the game on superior hardware for a while now, and have accumulated a healthy majority of the available rewards. If this port was made strictly to provide existing fans a portable experience then the lack of cross-save/cross-progression alone kicks that theory in the shins (and the omission of such a feature is all the more glaring when you consider the option to link your Switch to your Battle.net account; maybe it’s something coming in the future?). That’s not to say fans won’t be overjoyed to have their favorite game available to play anywhere – I certainly am with how much I travel – but they’re obviously not the market.

And let’s go ahead and write-off the hyper-competitive fragment of the fanbase as being the target audience: they will want nothing to do with a version of the game that runs at the lowest “playable” framerate and isn’t running hardwired into a router (which, yes, I know is something you can do with the Switch, but it requires an add-on). Those who live for playing Overwatch at its peak will only be upset by this port, and I believe Blizzard knows that. So, who then is this port really for?

If all you own is a Switch, and you never played Overwatch, congratulations: you’re who this port is truly for. Think about it: it’s $40 for a version of the game that doesn’t carry over any existing progress, and is a version which the diehard players who purely play the Competitive Mode will never touch. When you view the port through those lens, it’s easy enough to recommend to new players with only a Switch. The game runs well, looks great considering what it’s running on, and has everything the other versions have (it launched alongside the most recent patch, showing Blizzard intends on keeping the Switch version current with the other iterations). If you have never played Overwatch and are dedicated to your Nintendo console then this is a fine product for you. 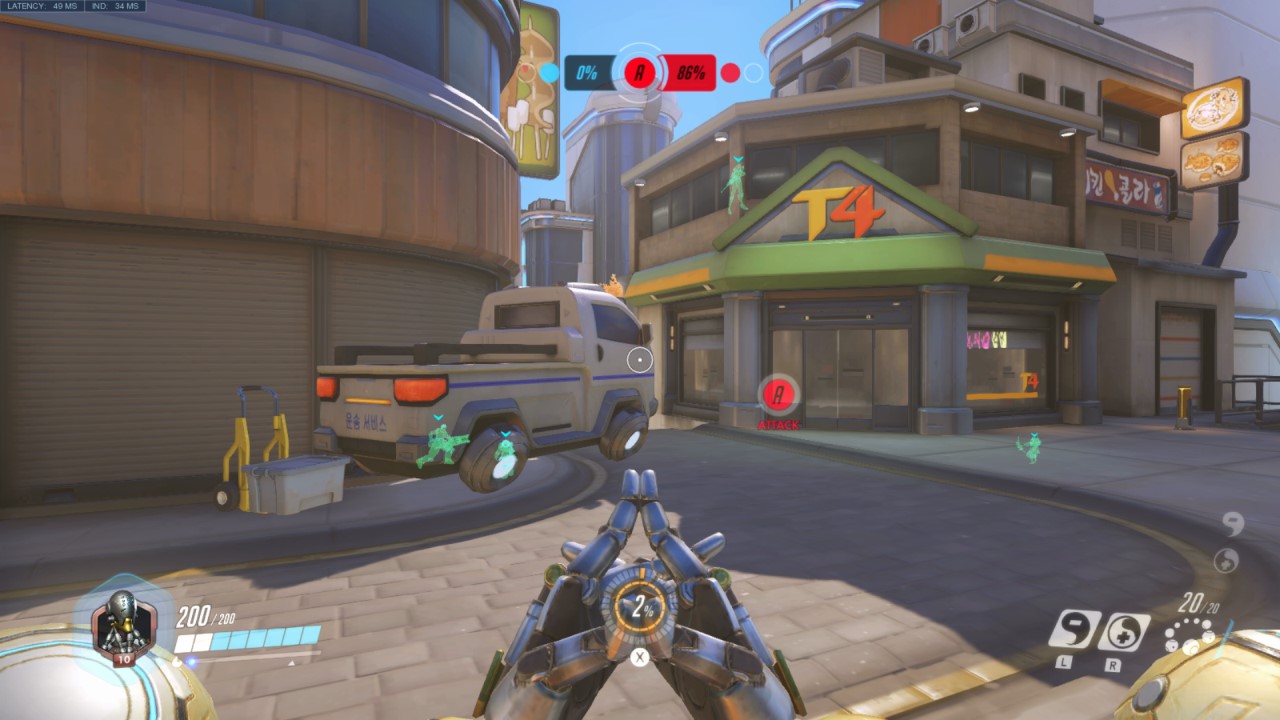 If you are an adamant Overwatch fan who can stomach the lower framerate, inability to carry your existing account over with all its goodies, and don’t mind taking the game less seriously then the portable nature of the port may also be enough for you. Since I’ve started playing Overwatch on the Switch I’ve actually played less of my PC version, despite that looking worlds better and running smoother. That’s not just because I am reviewing the damn thing, oh no: there is something amazing about playing a well-built port of a game you love while laying down in bed under the covers. I know portability isn’t as large a selling point for some diehards, but as someone who is out of town on a monthly basis for military work, well, portable Overwatch tickles my fancy.

However, if you have Overwatch on any other platform and you don’t frequently travel, this port is likely something you should ignore. It’s a good port, but at the current asking price the lack of any form of cross-save bitters the prospect. Why would you pick up what is the objectively weakest version of the game if you have to start over, and portability is merely a benefit, not the point? If you are new to Overwatch and can’t play it elsewhere pick this up. If you are in love with the game and can forgive the shortcomings because you need portable Overwatch in your life then fire up the E-Shop and make that purchase (skip the physical edition, considering it’s just a download code anyways).

If you don’t care about portability and have Overwatch elsewhere then give the port a pass. Maybe once cross-save, cross-progression, and/or cross-play are added this port will be more compelling to existing fans, but for those that believe Overwatch isn’t Overwatch when the competitive side isn’t at its best then this port will only drive them mad. Overwatch is a great port for new fans and casual fans of the game, and no one else.