The latest news in the world of video games at Attack of the Fanboy
December 6th, 2012 by William Schwartz In 2008, Atlus released Shin Megami Tensei: Persona 4 on the PlayStation 2 to critical acclaim. The Japanese style RPG launched on the aging console, but used some clever visual trickery to give it a modern feel. Coupled with deep exploration into its relatable cast of characters and engaging combat system, Persona 4 exemplified everything that is beloved by this sub-genre of games. Fast forward a few years, and now Sony’s newest handheld, the PlayStation Vita, plays host to Person 4: Golden, a remake of the original game with added features on the device. Is it still good? Hell yes it is, and its probably the first game on the PS Vita that truly feels like a “must have”.

If you played Persona 4 and were just wondering whether it was any good on the handheld, you can stop reading right here. Yes! It’s fantastic, now either turn on your handheld and download your copy, or head to your favorite retailer. Do not skip go, you will get lost all over again in this game, and it looks great on the OLED screen, there’s is absolutely no reason not to own this game if you are a fan of the Persona series. For those that haven’t played the game, you’re in for a treat, because Persona 4: Golden is one of the better reasons to keep your PS Vita at arms length in 2013. 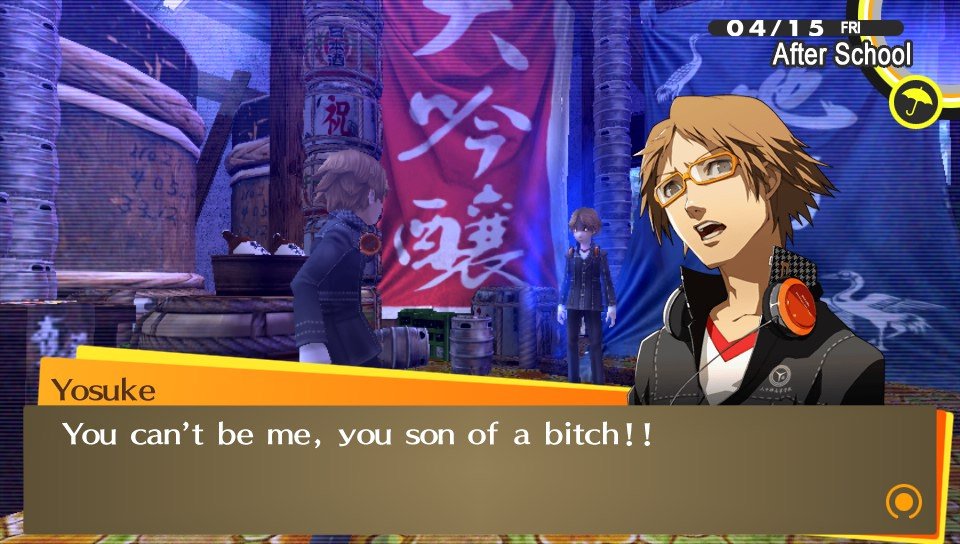 Don’t let the name throw you off of Persona 4: Golden. This is a fully enclosed story that does not need you to have played any of the previous Persona games to make sense of it. Nor does having done so make you enjoy this game any more or less. In fact, Atlus does a considerable amount of explaining prior to even scratching the surface of Golden. You, a transfer student to the small rural city of Inaba, find yourself caught in the middle of a series of mysterious murders. Unraveling this mystery is the core premise of Persona 4: Golden, but how the game gets you there is the real hook. Inaba feels like an established world. Not one that has been made for you, but one that you have joined. You go through your normal everyday life as a teenager trying to fit in at a new high school in the small town. You’ll meet friends, join clubs, and build social links with them. In parallel, you’ll increase your character’s proficiency, and slowly unravel the mystery that revolves around the game’s Midnight Channel segments.

These segments are where you’ll see the bulk of the game’s combat and dungeon crawling portions. Persona 4 is a turn-based affair when it comes time to fight, but it uses a slightly different way of controlling your party members. Teammates are not controlled directly by you, rather guided by using tactics that govern your group. These tactics are largely reliable and can add some tension to a fight when placing all your hopes on the software’s decision making abilities. An important aspect to the turn based combat is gathering and fusing Personas, these will give you a leg up on the shadow creatures of the Midnight Channel dungeons, and it’s also one of the more addicting elements of this game. Similar to Pokemon’s gotta catch ’em all premise, you’ll be uncovering and crafting Personas which aid you in battle. There are well over 150 to collect, each with their own specialized attack features that can be called on at the start of a battle. 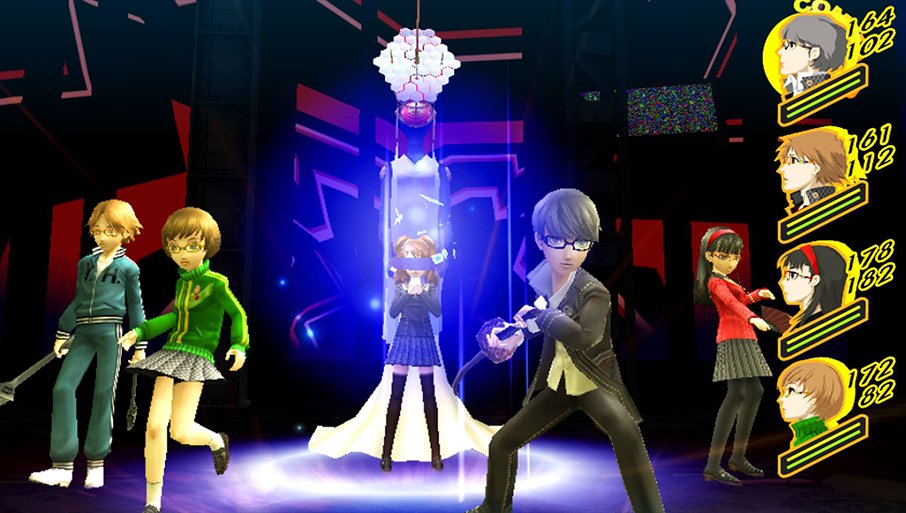 Persona 4: Golden is largely divided into these two halves of the game. The dungeon crawling aspects and turn based combat of the Midnight Channel, and the exploration that prepares you for battle. The game is broken down into day long chunks where you’ll spend your mornings and afternoons doing normal kid stuff. You’ll go to school where you’ll forge the relationships with your peers, gain knowledge from taking quizzes, reading books, and listening to lectures. You can join sports teams or clubs, take part-time jobs, or tend a garden, but all of these activities will ultimately make you better ready for battle in your after-hours adventures. It’s really a brilliant way to turn the traditional RPG grind into something more personal and tailored to your personality and choices.

Of course, Persona 4 had all of these things when it launched in 2008, so what’s new on the Vita version? Sadly, there isn’t any real innovative use of the Vita’s control possibilities, but the game does include new social elements, like using the PlayStation Network to call on others for help in game. You’ll get words of encouragement from the community that’ll help later on, or describe which paths others have taken when they’ve hit specific story branches. Comparing the PS Vita version to the original, you’ll notice that there are more Personas to collect, changes in the skill cards and shuffle time features, and brand new relationships to build with new characters. Marie, an apprentice in the Velvet Room is introduced early on, and offers a new social link that opens the path to Personas from Aeon arcana. The new features added to this version of Persona 4 are many, and ultimately extend an already lengthy campaign well past the 100 hour mark, if you are looking to see all there is to see in this game.

Persona 4: Golden on the PS Vita is the most refined version of the now classic PlayStation 2 release. While it would be nice to see Atlus bring new Persona content to the PS Vita, Persona 4: Golden will tide you over nicely until that day comes. It’s a massive timesink though, a world that you’ll ultimately get wrapped up in, and is as addicting an RPG as any other out there. The game’s vibrant art, thoughtful storytelling, and massive progression system is sure to please, whether this is your first go round, or fifth.