A great game gets better. Fans of the Persona series will be entirely familiar with the cadence of Atlus releasing an improved upon version of their Persona games following the initial release.  It did take some time, but Persona 5 is getting that treatment with the release of Persona 5 Royal.  Similar to the Persona 4 Golden and Persona 3 Festival it does add some more content to the mix,  though Royal feels like the most complete and comprehensive re-write for a Persona game of this nature.  What’s been done here isn’t an entire overhaul, but instead Atlus throws a ton of new content, gameplay changes, quality of life improvements, and refinements at an already robust package that didn’t feel too lacking at launch.

While what you played in the 2017 release of Persona 5 is still very much what you can expect from Royal, there’s been a bunch of changes.  If you liked Persona 5, Royal improves upon this experience.  If you’ve never played Persona 5, even better, you’re getting the complete package without having to bear 100+ hours of the original game.  Returning players know what they’re getting into as Persona 5 is a massive RPG that focuses on the minutiae of a teenager’s life. “Joker” has to balance going to school and his relationships alongside being a member of the Phantom Thieves — a group that seeks out evil-hearted personalities across Japan.  The game has numerous facets, and if you’d like to learn more about the many gameplay mechanics of Persona 5 we delve into those in our initial review of the game.  We’re going to focus mostly on what’s new in Royal for the purpose of this review. 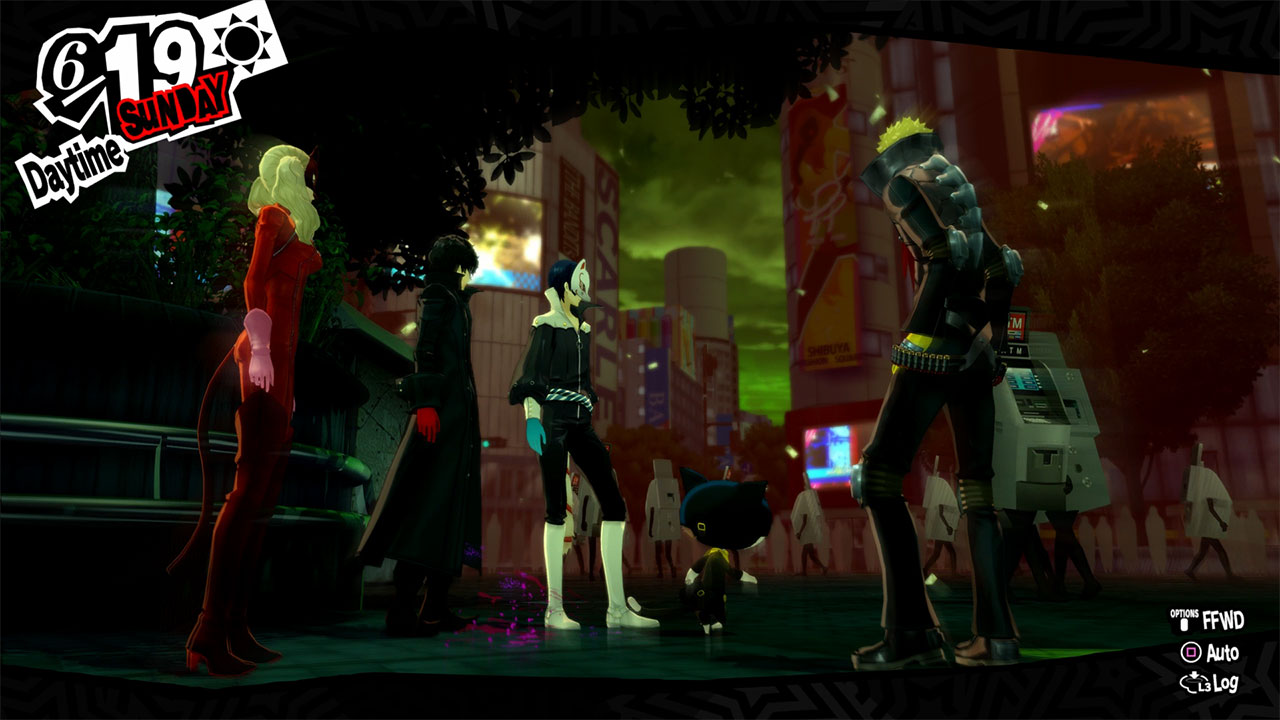 Personally, I played a good bit of Persona 5 before putting it down.  I Always wanted to get back to it at some point, but since I wasn’t reviewing it, I didn’t have a huge reason to go back other than just being a fan of the series.  When Royal was announced, I knew that I would need to wait for this one.  The same thing actually happened to me with Persona 4.  I initially put the console version down and then really dug-in for the Vita version.  Given that experience, what I found with Royal wasn’t too surprising.  I expected to really enjoy the game, what I didn’t expect were all the changes made to the core product.  There’s a ton of new content in Royal.  There’s a new character that you can add to the Phantom Thieves.  Mementos have been completely overhauled and a new NPC has been added to the game that makes really exploring this part of the game worthwhile.  There are new gameplay elements like Joker’s grappling hook which change gameplay and strategy in the game’s Boss Palaces.  Speaking of Palaces, new collectibles have been added to this facet of the game which can be found by really scouring these areas.  A whole new palace area has been introduced, as well as a new semester to play through.  All that and a ton of presentation upgrades in terms of music and cinematics, with unique and new scenarios you’ll find yourself in that include a ton of new dialogue options with different characters.

The additions from Persona 5 to Royal feel like they are a lot more than what I remember from Persona 4 to Golden. The meaningful additions like the new character Kasumi actually change the way the story is delivered quite a bit.  Persona 5 feels quite different than Persona 5 Royal and I suppose that’s good.  You’re not missing much if you don’t play the original, but if you did that’s OK.  The new character does take a while to get rolled out proper.  If you aren’t aware of the sheer length and depth of Persona 5 then you’re in for a time waster with this.  It’ll likely take you 10’s of hours minimum to actually get the point where you can use Kasumi in your party.  You will have some interactions with her fairly early on, but just be warned that it’ll take a while before you can add her to the Phantom Thieves.  Outside of that, Royal does feel a lot like the original release.  Things still play out as they did in terms of the introductions to Ryuji, Ann, Morgana, and Yusuke before things start branching out even further. 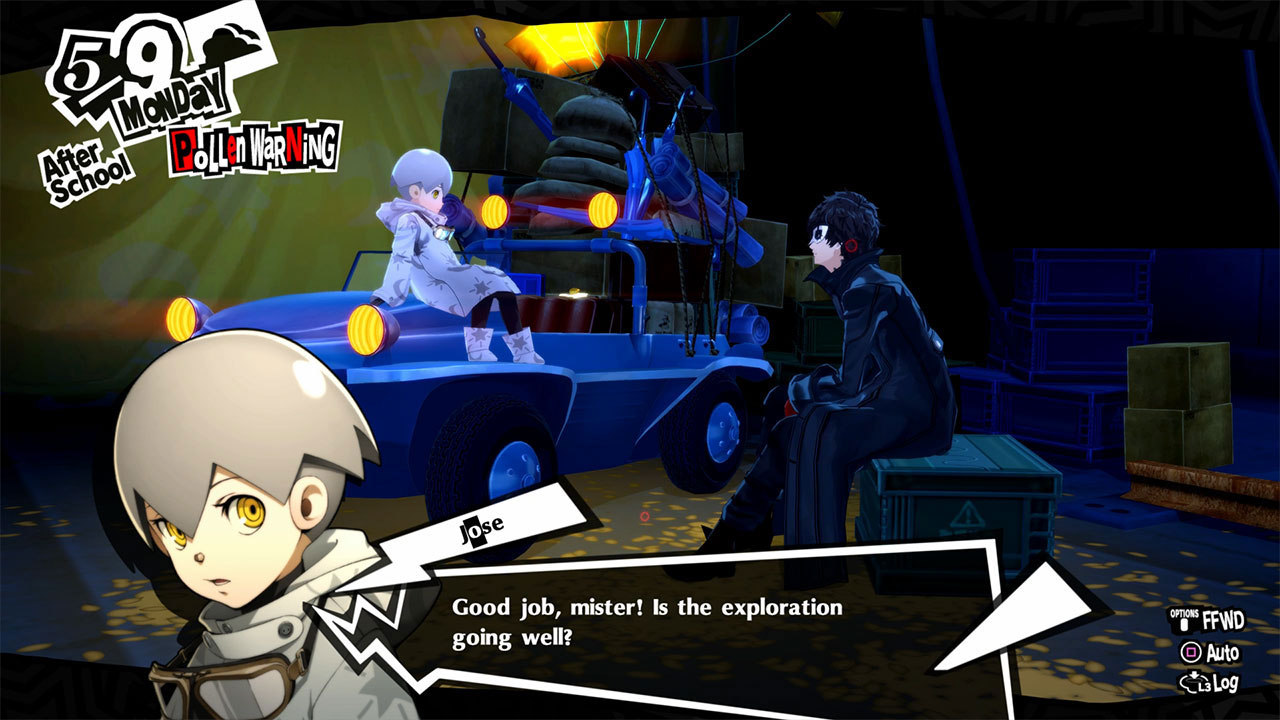 One thing you will notice pretty early on is the big changes to the Mementos sections of the game.  This is a dungeon style area that has you trying to track down mini-boss characters.  In the original release I personally found Mementos to be a little monotonous.  Refinements in Royal do make this a little bit more fun to traverse and track down loot from this part of the game.  This is largely done by introducing  a new NPC character in Jose and by adding a new collectible currency to spend at this vendor. One is stamps, the other are flowers.  Both are used with this new NPC character to change mementos or purchase items, respectively.  Jose has a wide variety of items that can be purchased, and you’ll be picking up plenty of flowers while in Mementos.  You just have to find Jose to spend them.  Stamps can also be found throughout Mementos and these allow you to change Mementos to your liking.  Whether you want to earn more XP from the mode, better monetary rewards, or better item rewards.  You simply use the stamps that you’ve purchased to increase the portion of Mementos that you want to change.  Both are aspects of Mementos that make it a little more worthwhile.

Another aspect of Persona 5 that’s been improved upon with Royal is in collectibles.  A brand new featured called the Thieve’s Den has been added to Royal and it allows you to do a number of cool things that add to the overall progression of the game.  The Thieve’s Den allows you to complete a number of different challenges to earn coins which can then be used to purchase things like artwork, music, or videos from the game.  You can also completely customize this area with different themes, character models, furniture, decorations, and other items.  The Thieve’s Den is a good solution to add some nice structure to the game in putting forth some challenges for the player to complete. 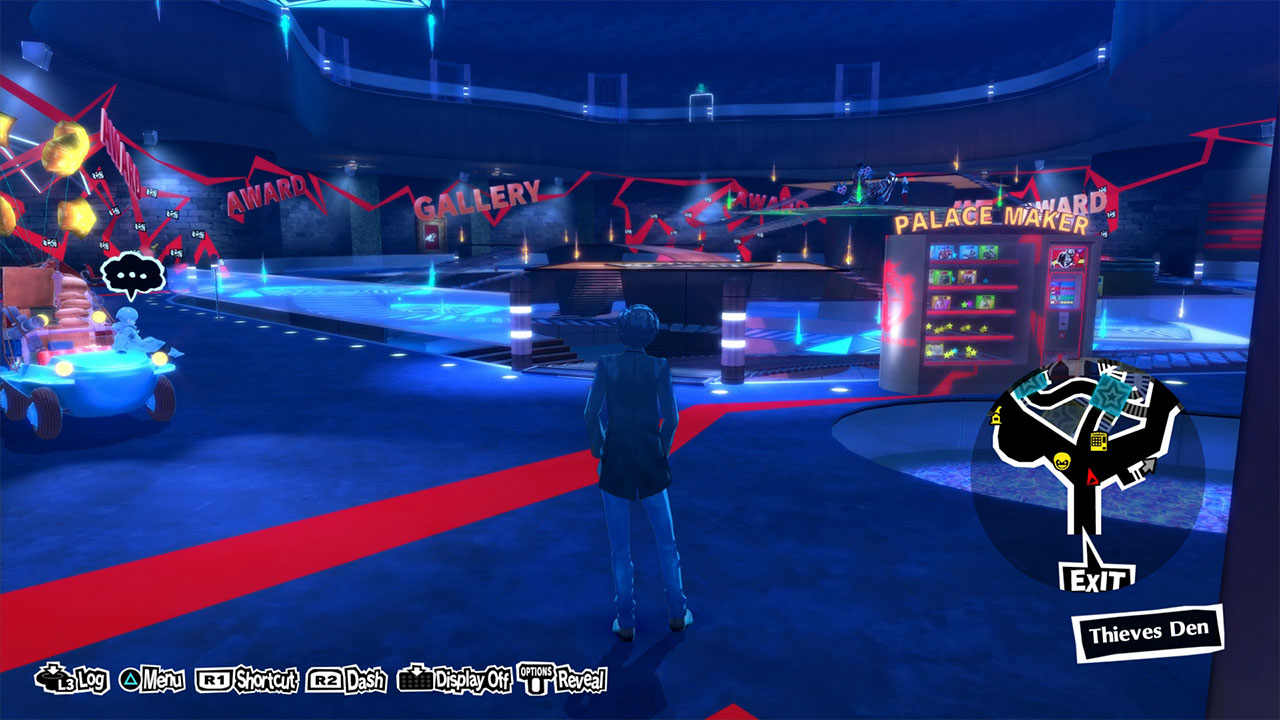 While the aforementioned features of Royal are probably the most prevalent, there are plenty of others as well.  From a brand new area that you can visit and have social interactions with your group, to smaller quality of life and refinements to the game like new portraits, new weather animations, there are so many little changes that further polish what was a gem of a game.  And that polish carries over to gameplay aspects as well.  Atlus looked at almost every conceivable problem with Persona 5 and remedied it.  With even small things like the way ammunition works in the turn-based combat to make it a more viable weapon, or giving players more time to explore this fascinating world between daily events.  Every single aspect of Persona 5 looks like it was examined and tweaked, if ever so slightly to make this the definitive version of the game.

By most accounts Persona 5 didn’t do much wrong.  While most games that achieve the critical success of P5 would rest at that job well done, Atlus has continued to further refine their masterpiece into something even better.  Persona 5 Royal is proof that even the best games can be made better by acknowledging shortcomings and addressing them, however small they are.