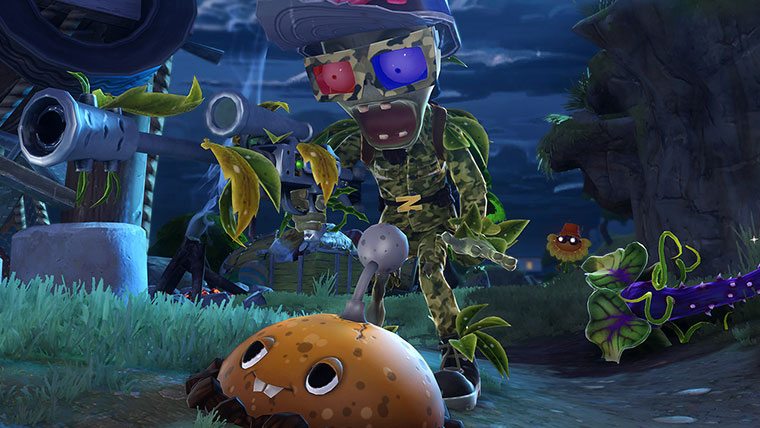 Plants vs. Zombies: Garden Warfare feels like a crazy experiment. A third person shooter featuring the cast of the wildly popular mobile series that pits players in both multiplayer and cooperative action – Garden Warfare is anything but expected.

There are so many reasons that this game should not work, but it does, and on all fronts. The multiplayer is rock-solid (barring some early launch matchmaking issues), and the cooperative play is also highly enjoyable, if that’s your bag. It ties into the tower defense games found on mobile devices in just enough ways to keep fans of those games interested, and is just competent enough as a shooter to keep those who came for the multiplayer entertained for hours on end.

Titanfall might be billed as the shooter that supposed to breathe fresh air into the genre, but it’s going to have some help from Plants vs. Zombies: Garden Warfare. 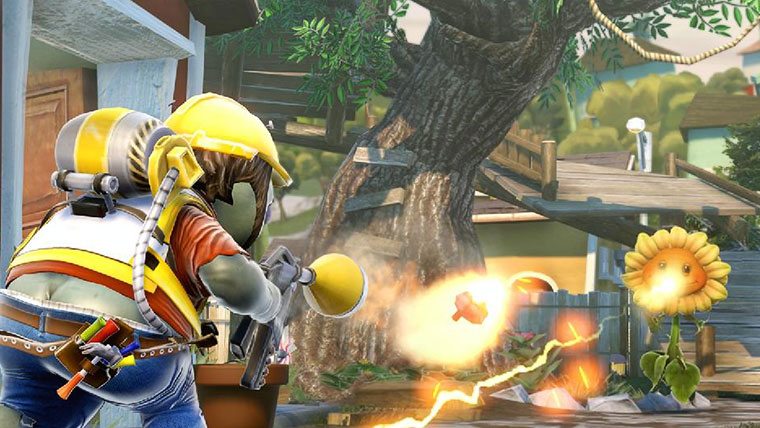 Garden Warfare is a multiplayer only game. Well, you can play by yourself, but you’d be doing yourself a disservice. And that’s assuming that no one will join you when prepare a cooperative lobby. For the most part, you’ll be playing with other players. Whether that’s over Xbox Live, or in a split-screen mode.

Whether online or local, the cooperative mode called “Garden Ops” is very similar to what is found in both the original PvZ and the latest F2P title from PopCap. The major differences are that you are playing as the familiar plant types from the series, defending gardens in a third person shooter setting. Essentially it’s a “Horde Mode”. It’s up to four-player co-op via Xbox Live or Origin, and it’s class based, so picking the right combination of character types will go far in aiding you through the game’s increasingly difficult 10 round sets.

Garden Ops is a fun mode. Rife with boss battles that’ll require exceptional team work to fend off the zombie advance. There are four difficulty modes to tackle, and the only complaint I would levy at the mode is the 10-round limit. It would have been nice to see a “let’s see how far we can get” mode, like is seen in games like Gears of War. Garden Ops plays very similarly to the cooperative mode in Mass Effect 3, right down to the escape sequences at the end – in which, Crazy Dave will scoop you up in his flying Winnebago.

Garden Warfare is light-hearted, fresh, and whimsical. It’s age appropriate in terms of content, but the gameplay isn’t dumbed down or stifled by this approach. This is really evident in the promising class-based multiplayer. It’s solid in terms of gameplay, surprisingly balanced, and features a ton of unlockables that keep things interesting. The class based combat pits teams of zombies vs teams of plants, each member filling a very specific role in the game. There are four classes on each side, and they aren’t mirrors of one another. It’s going to be a familiar structure for fans of a game like, say, Team Fortress 2 for example, when it comes to gameplay. But instead, since each team is comprised of different characters with unique abilities, things can get interesting.

The multiplayer in Garden Warfare is chaotic, but can be extremely rewarding for teammates who work together. Utilizing the varying strengths and power-ups of each character, is important to success in the game, but it’s also not a barrier to entry for those uninitiated into the world of shooters. It hits just the right pitch between being fun and accessible for casual players, and offering a challenge for hardcore fans of third person shooters. While it might not convert everyday Call of Duty or Battlefield players into Garden Warfare devout, it is a nice break from other, more serious games.

Plants vs. Zombies: Garden Warfare is a colorful mess of a game on the surface, and looks absolutely stunning on the Xbox One. Multiplayer is smooth. Movement, shooting, and utilizing special abilities works well. It’s not a twitchy shooter by any means. Garden Warfare is more deliberate, and involves more strategy than you would think, considering its cartoon exterior. Digging into the different characters and the different special abilities for each, there’s a surprising amount of depth to the gameplay. Players can play the role that they want to. There is a heavy class, a healer, and in between classes which feature unique benefits of their own, on both the plants and zombies side. At launch, we’ve only got a couple of modes to play with, though. There’s a traditional deathmatch mode that tasks players will making 50 kills, and there’s an advancement mode that kind of feels like Rush from the Battlefield series.

Tying the modes together is a robust Sticker Store, that keeps you grinding away at a familiar XP system that rewards you with coins. While at first glance, it appears to be the foundation for micro-transactions, it’s not asking for any money… right now. As it stands, it’s simply an in-game store that lets you purchase sticker packs, with items that can used to customize different aspects of the game, as well as consumable items to be used while playing. Coming in a number of different prices, the less extravagant packs feature less rare items like common buffs or single-use items. While spending more coins on better packs will net you the opportunity to score rare loot and piece meal character skins. It looks like something that might be geared towards a younger audience, but it’s hooks are undeniable for anyone who spends any time with the game’s multiplayer mode.

Plants vs. Zombies: Garden Warfare definitely does feel like a crazy cross pollenation experiement. It manages to appeal to the full spectrum of gamers. Whether that be PvZ fans coming from mobile, or those looking for online multiplayer action. While we’ve seen our fair share of failed experiements in the past, hopefully PvZ: Garden Warfare paves the way for more developers to try crazy experiements to the same effect.

Plants vs. Zombies Xbox One
"loved"