A great remake of a rather repetitive roguelike. 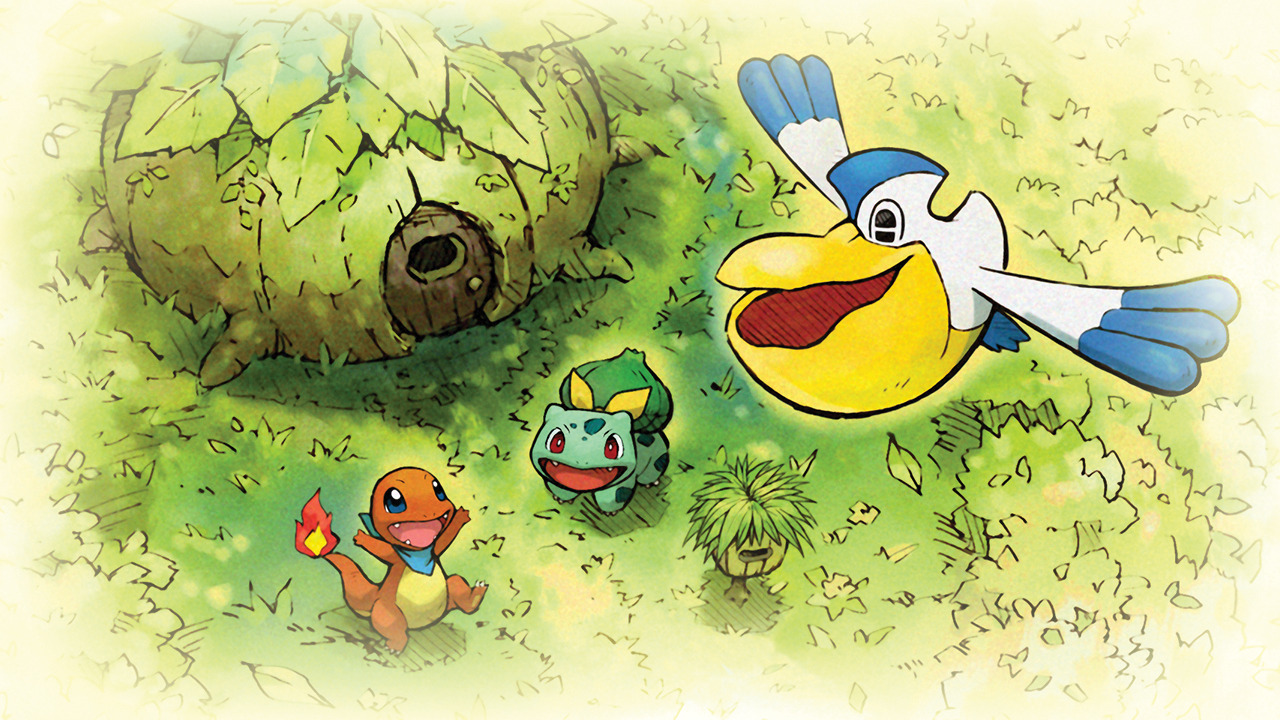 These games don’t hold up too well.

For those of you who are unfamiliar with the series, Pokemon Mystery Dungeon: Rescue Team DX is a roguelike dungeon crawler where you control a Pokemon who forms a Rescue Team with a partner. You and your partner delve into procedurally generated dungeons, taking on jobs, recruiting new allies, and battling via a grid-based combat system. It’s the poster child of easy to learn, hard to master, and what starts out as a peaceful, carefree dungeon crawling adventure will quickly turn into a test of endurance and strategy, especially in some of the game’s lengthy post-game dungeons. It’s not the deepest game in the world, but you won’t get by just mindlessly mashing the attack button like you can in some other Pokemon titles. 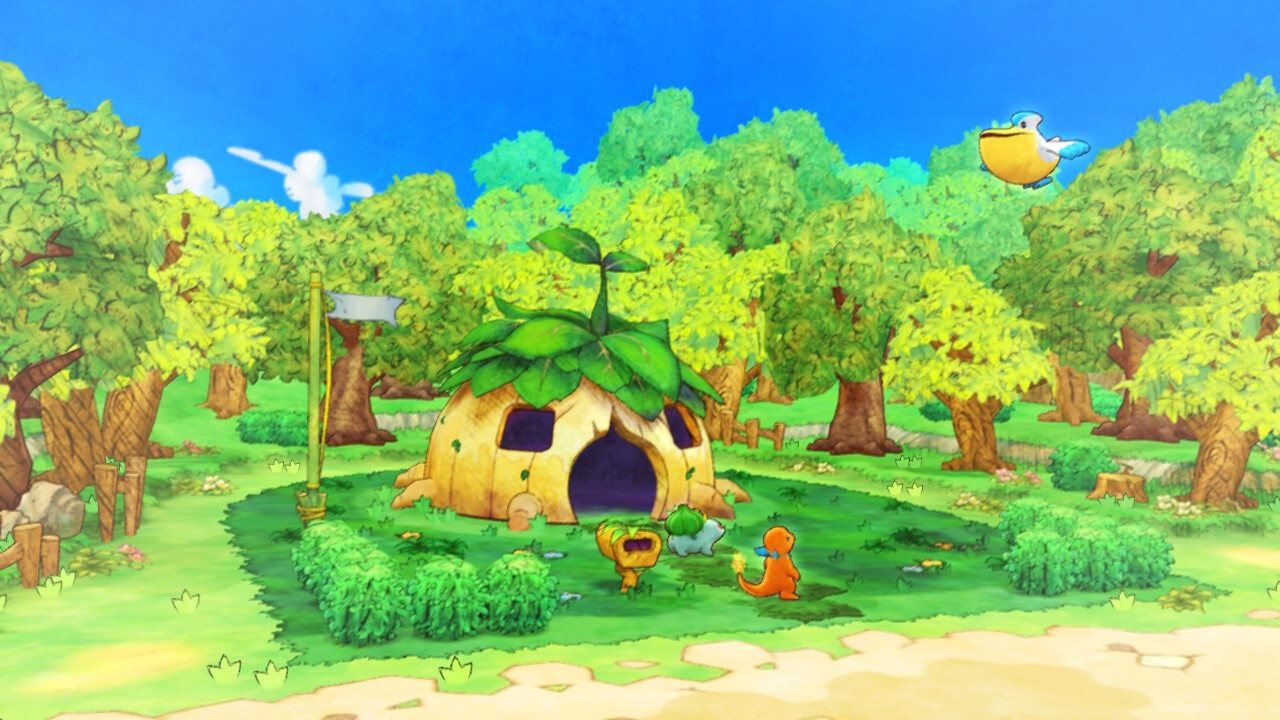 As a matter of fact, Rescue Team DX has very, very little in common with the mainline series of Pokemon games. The one thing that does transfer between the two series, though, is the charm, which Rescue Team DX elevates to the next level. It’s hard to not crack a smile while playing the game. The gorgeous art style paired with the lighthearted tone and witty dialogue between characters is enough to warm anyone’s heart, and it’s an excellent change of pace compared to the rest of the heavy hitters releasing during 2020’s very busy spring season.

Rescue Team DX’s quirkiness is apparent from the moment you start the game, as it presents you with a personality quiz before anything else. After answering a number of multiple-choice questions, a summary of your supposed personality scrolls onscreen as silhouetted Pokemon shuffle about in the background. The game then assigns you a Pokemon that corresponds to your personality and allows you to choose a partner from the rest of the group. These aren’t your everyday starter Pokemon that a professor would give to a trainer, though. These are the stars of your story, and the first major difference between Mystery Dungeon and the mainline Pokemon series.

In Pokemon Mystery Dungeon, you don’t go out and catch the Pokemon. You are the Pokemon. More specifically, you’re a human who has mysteriously woken up one day as a Pokemon, and that sets the events of the story in motion. You quickly meet your partner Pokemon, who has always dreamed of starting a Rescue Team, a group that aids Pokemon in need, and the two of you team up after a preliminary job, at least until you can figure out what happened to your human form. If you didn’t draw the conclusion from that description, Rescue Team DX is about Pokemon, just not in the same way as the main series. Here, they’re unique characters with personalities and motivations rather than trophies to be acquired en masse. The world completely revolves around Pokemon, and they’ll be your quest givers, shop owners, and NPCs throughout your adventure. There aren’t any Poke Marts in these parts. 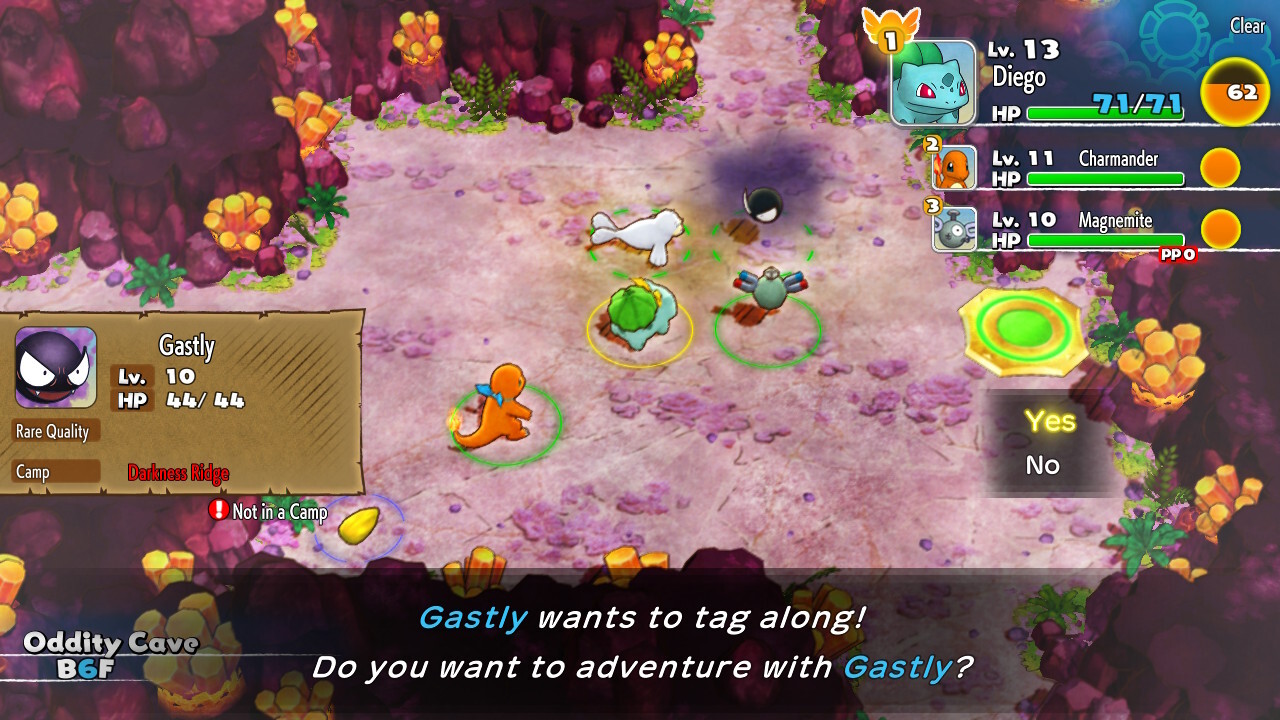 As a Rescue Team, you and your partner will take on jobs that task you with exploring procedurally generated dungeons. Usually, your objective is to reach a certain floor or find a certain Pokemon, occasionally culminating in a boss battle against a powerful foe. The dungeons themselves get samey and repetitive very quickly. Procedural generation just wasn’t at its peak in 2006, so Rescue Team DX’s dungeon layouts are basic square rooms with long, slender hallways connecting them. Items are spread randomly across the floor, and some tiles may hide status inflicting traps. Despite these efforts to spice things up, each of Rescue Team DX’s dungeons feels as lifeless as the last, and there’s very little incentive to explore every corner of each floor.

Thankfully, combat helps keep things engaging, although anything outside of boss battles can get mind-numbingly dull. Just like exploration, combat operates on a grid, with each participating Pokemon taking turns attacking or using items. While you can have a fairly large party of Pokemon with you at any given time, you can only actively control the leader of the party, leaving you waiting around all the time while both the friendly and enemy AI pelt each other with uninteresting animations. Typing and spacing are things to keep in mind, but when it comes down to it, you can just press the A button and let your Pokemon use the best move for the situation. Fortunately, combat encounters never last too long, but running into groups of enemies back to back can be especially frustrating, especially if the stairs to move on to the next floor are just out of reach. The primary weakness of Rescue Team DX’s combat and exploration, however, is how long everything takes. Combat involves sitting through several prolonged animations and text boxes, making small skirmishes last just long enough to start to get annoying. Inventory management and dungeon navigation are also tedious and slow. Things like auto mode for exploration help alleviate this a bit, but for the most part, you’re just monotonously passing the time in between brief flashes of excitement.

In crowd fights (or a Monster House), positioning and item usage become crucial to your survival, but these happen too few and far in between, interspersed by long stretches of small, uninteresting fights. Boss battles are the highlight of Rescue Team DX’s combat, pitting your entire party against one extremely powerful Pokemon. Because each of your Pokemon is focused on one foe, you can spend less of your time on thinning a herd of enemies and more on synergizing with your other Pokemon and applying status effects like sleep or poison. During some of the later boss encounters in particular, smart status effects and item usage can mean the difference between victory and success. In the right situations, Rescue Team DX’s grid-based combat can really shine, but these moments are unfortunately rare. 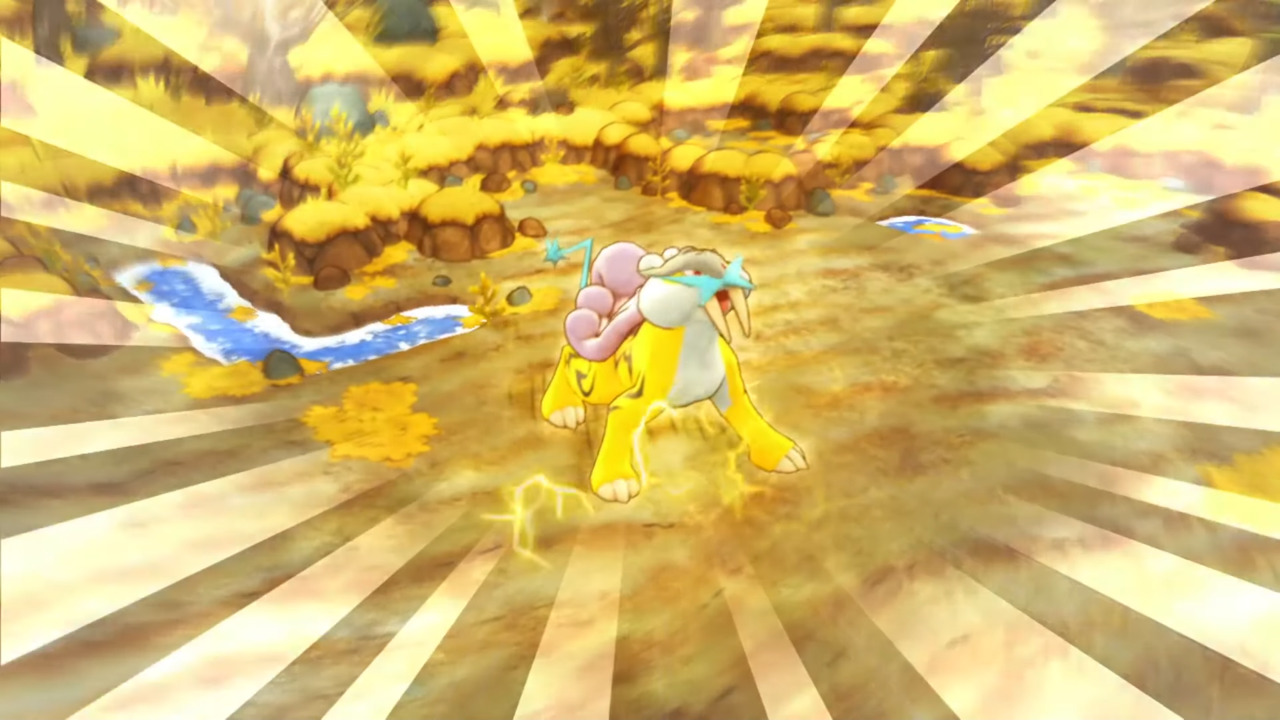 In between each mission, you’ll be able to visit Pokemon Square, an incredibly charming hub that provides every service a burgeoning Rescue Team could ever hope for. While it doesn’t have much to offer in terms of gameplay, Pokemon Square is always a joy to visit, mostly due to how charming of a venue it can be. Each shop is tended to by a different Pokemon, and every store owner, from Kangaskhan to Persian, is a pleasure to interact with on a regular basis. The Kecleon Shop and Wigglytuff’s Camp Corner will be places you’ll need to visit frequently, and they’re just as great as the rest.

If you’re in need of some extra XP, you can also visit the Makuhita Dojo, which allows you to power level one of your Pokemon in exchange for a Dojo Ticket. Here’s the thing with the Makuhita Dojo, though: I hate the Makuhita Dojo. Instead of automatically applying the XP to your Pokemon, you’re sent into a generic dungeon with a time limit, tasked with defeating as many wild Pokemon as possible. This makes power leveling or bringing a newly acquired Pokemon up to a decent level an absolute slog, and you’ll likely have to perform multiple Dojo runs at once for a single Pokemon, making the scenario even worse. The Makuhita Dojo is a necessary evil considering you’ll want to have a varied roster of equally leveled Pokemon on your Rescue Team so you can be ready for anything the game throws at you, but it’s a place you’ll almost always dread going to. It encapsulates most of Rescue Team DX’s issues, from its generic dungeons to its dull combat, and it’s a wake-up call that reminds you that Rescue Team DX is based on a foundation that’s over a decade old at this point.

Rescue Team DX’s faults are more than worth putting up with, though, because the story and characters are genuinely interesting, which is uncharacteristic for most Pokemon games. It’s not a narrative masterpiece by any stretch of the imagination, but the game’s colorful cast of quirky characters are well-written and entertaining. There are also dialogue options at certain points, and while they don’t have an effect on the story as a whole, the small quips you can add to a conversation are always hilarious. They’re just enough to be able to give your character some personality without slowing down the pace of a scene at all. Rescue Team DX’s story is like an excellent cartoon, and it’s the primary factor that will keep you motivated during those longer stretches of mindless dungeon crawling. 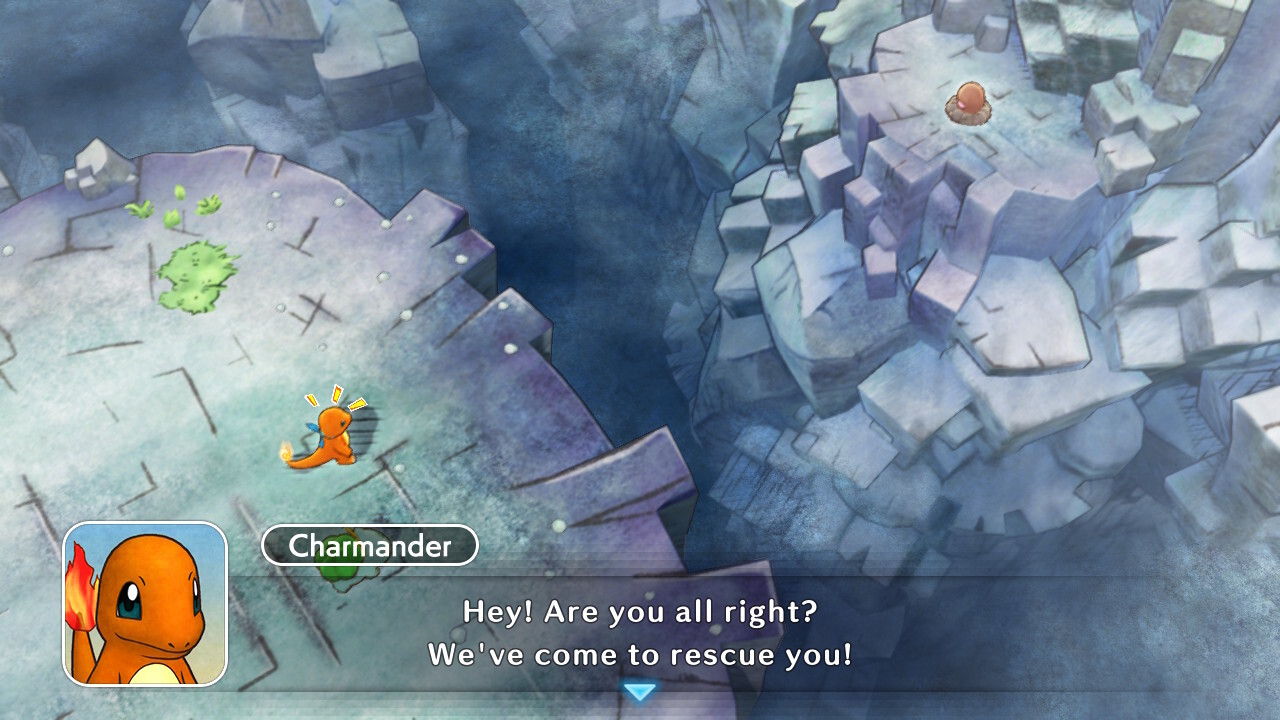 As a remake, Rescue Team DX is incredible. The new art style is gorgeous, and it looks wonderful in motion. Every scene looks like it was lifted straight out of a children’s book, and the game perfectly captures the charm of the original pixel art with the new style. Pokemon Mystery Dungeon fans know that the series has some fantastic music, and Rescue Team DX does not disappoint in the slightest. Each of the original tracks is remastered while still remaining faithful to the originals, and you’ll no doubt have your nostalgia swell up to unimaginable levels when you hear the main theme playing on the title screen if you played the originals. It just feels nice to have a series that has traditionally been pushed to the wayside available in HD on the big screen for once.

Having Mystery Dungeon on the big screen also makes longer play sessions more tolerable, which is fantastic considering how in-depth the post-game is. The main story is only the beginning, as several new mechanics and dungeons reveal themselves after the credits roll. Blasting through the main scenario will take around 20 hours or so, but the post-game content can keep you occupied for much longer. Things that would happen fairly early in a traditional Pokemon game, like evolution, aren’t even available until the post-game, and don’t even think about catching any legendary Pokemon until finishing the main campaign. Recruiting new Pokemon, battling tough bosses, and unraveling some of the game’s most interesting mysteries are all highlights of Rescue Team DX’s post-game, and if you’re able to put up with the game throughout the duration of the main campaign, there’s much, much more to dig into once the main story ends.

All in all, Pokemon Mystery Dungeon: Rescue Team DX is an excellent remake of a dated game. The game lacks some of the appreciated changes that the series received in later entries, but it still holds all of the charm that the Pokemon Mystery Dungeon franchise is known for. If you don’t have any nostalgia for the Pokemon Mystery Dungeon series, then Rescue Team DX doesn’t have much to offer you, but if you have fond memories of the original games, then there’s a lot to look forward to. The graphical style, story, and music help carry the repetitive gameplay, but the experience can start to wear on you after hours and hours of monotonous dungeon crawling. At the end of the day, the foundation of Rescue Team DX is still a pair of 14 year old handheld games. Hopefully, Rescue Team DX paves the way for future Mystery Dungeon remakes (come on Explorers of Sky) or maybe even a new original entry for the Nintendo Switch. Even if Rescue Team DX isn’t a grand reimagining of the original games or a reinvention of the series, it’s nice to see an underappreciated series get another shot at life on a home console rather than a handheld.