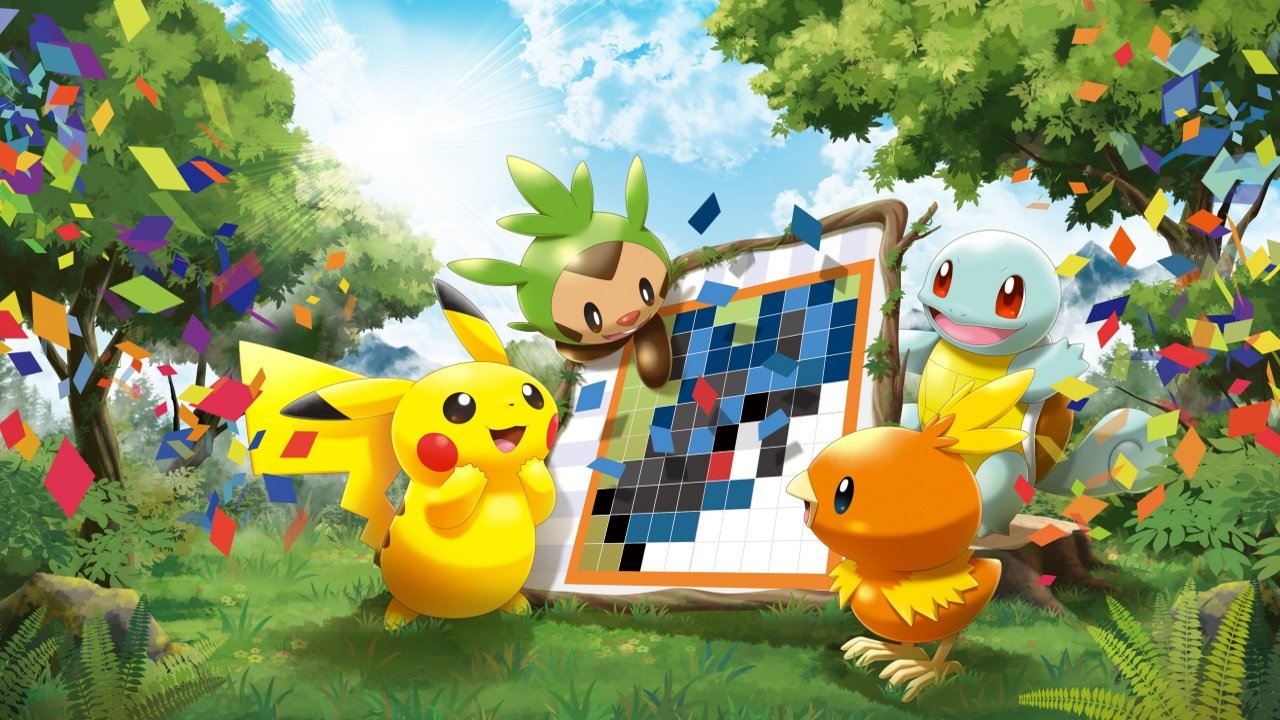 The Pokemon series is no stranger to spinoffs. Characters from the immensely popular series have appeared in everything from card games to pinball, with some mixed results but usually ending up being done pretty well. Pokemon Picross continues this tradition with a free-to-play puzzle game that is very easy to pick up, but deceptively hard to master. It takes the classic puzzle game of Picross and throws a Pokemon layer over top, but doesn’t just stop there. Additional elements bring this game together in a new and fresh way that should please both Pokemon fans and those seeking a more interesting puzzle experience.

If you’ve never played a Picross game before, it’s one of those concepts that seems simple but expands in increasingly deep and intricate ways. Essentially functioning in a similar fashion to Sudoku, players are presented with a blank canvas on which they must draw a picture. This canvas is made up of a grid, usually of 10×10 squares. On the outside of this grid are numbers, indicating clusters of filled in squares. By comparing the numbers on the top to those on the bottom, figuring out how each cluster can fit, and eventually making a lot of logical leaps you can end up filling in the grid as required.

Picross, including this Pokemon styled variant of it, is a fascinatingly simple sort of game, but one that will quickly addict anyone that enjoys a nice puzzle. The mechanics of the game keep sessions short, usually taking less than ten minutes, even for the most difficult puzzle. Yet the feeling of accomplishment that finally completing a tough puzzle entails will always keep you coming back. The puzzle itself is the main draw, but the picture aspect can’t be ignored. Filling in that last square and figuring out what you’ve been drawing this entire time is enjoyable all on its own. 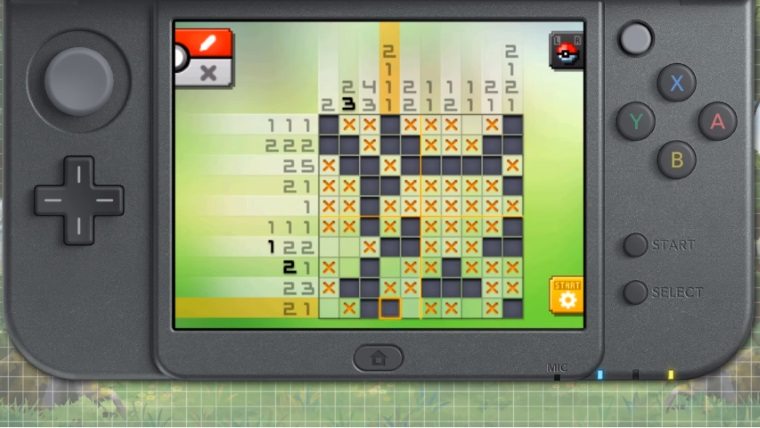 In the case of Pokemon Picross all of these pictures are of various Pokemon, or items related to the series. Pokeballs, Pikachu, Charizard, and all of your favorite characters and items have likely made the transition into the Pokemon Picross experience. There are 300 puzzles to solve here, with each unlocking a new Pokemon that you can add to your team. Once unlocked and added to your team you can use that Pokemon’s special power to help you solve the puzzles contained in the game.

This is where Pokemon Picross distinguishes itself from other Picross games. There are twelve powers included in the game, spread across the hundreds of Pokemon that you can unlock. They perform actions like revealing multiple rows of squares, highlighting important numbers, or just randomly solving a few squares. By giving you these special powers the game can feature more difficult puzzles to solve, without creating a road block for less skilled players. These powers are totally optional, so if you’re looking for more of a challenge, you can just ignore them completely.

One unfortunate omission is the use of the Pokemon themselves. The powers they use aren’t really that unique to the individual Pokemon. Their type doesn’t factor in, and the team you assemble has little to do with what the Pokemon themselves actually can do in the game, and more to do with what special powers you wish to use. They also don’t level up in any way, which is a big part of the base game. These elements could have elevated this to a true Pokemon spin off, instead of a reskin of a classic puzzle formula.

Using the powers that the Pokemon do have requires energy, with a recharge timer keeping you from simply throwing everything you have at each and every puzzle. This is where the free-to-play aspect of Pokemon Picross comes in, with Picrites being the all-important in-game currency. Picrites are earned for beating levels and completing challenges within them. Early in the game you’ll be given a lot, but that will slow to a trickle later on, as you have to actually work to complete the objectives if you want any Picrites at all. There are also some daily challenges for those that really want to keep from spending real world money. Once obtained, the player can spend their Picrites to speed up the recovery time for their Pokemon’s special abilities. This isn’t all that they do though. 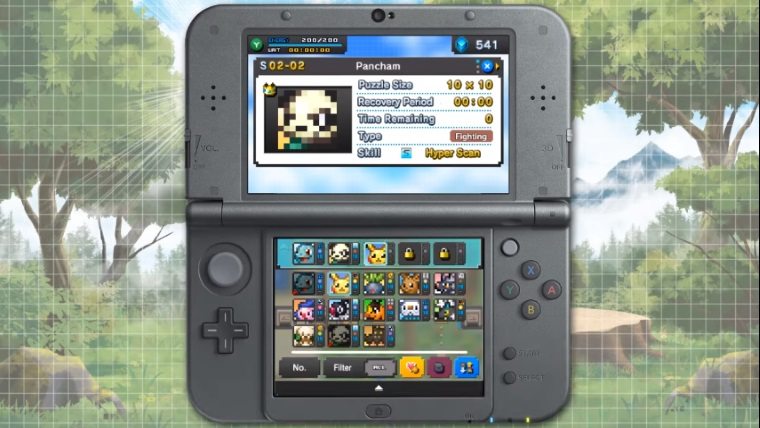 Picrites also allow the player to move on to new areas, with a checkpoint waiting at the end of each world. They also re-energize the player, with a timer ticking down at the top of the screen for when the game will begin locking down. These all might seem like dastardly free-to-play practices, and while they are to a point, they rarely get in the way of the fun. Unless you become horribly addicted, playing through the game quickly and for long stretches of time, it is unlikely that you’ll encounter any walls until late into the game. Once you do the question becomes, do you grind out more puzzles, gaining more Picrites as you go, or do you buy them with real money.

Nintendo has been playing with a lot of different free-to-play models as of late. Some, like Rusty’s Real Deal Baseball, were interesting, fun, and never felt intrusive. Others, such as Nintendo Badge Arcade, kind of got in the way, and felt like a bit of a cash grab. Pokemon Picross leans more toward the former, featuring a refreshing cap on the amount that you can spend.

Most free-to-play games have one goal in mind, getting players to spend way more money than they ever planned to. They do this by keeping the transactions small and spacing them out so that the player doesn’t realize how much they’ve spent. Pokemon Picross forgoes this by placing a cap of 5,000 Picrites on the shop. Once you’ve bought that many Picrites, whether in large, cheaper bundles or in multiple small segments for more money, the shop will change so that you can always get more Picrites for free. 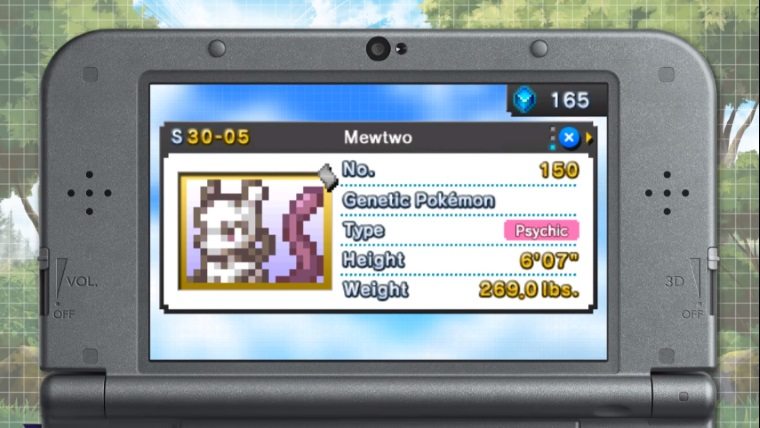 This simple feature keeps Pokemon Picross from ever feeling like it’s trying to drain your wallet. If you want to play the game for free, you can, just with some limitations and walls to keep your from experiencing the whole thing at will. Still, while it is a better method of implementing free-to-play, it is still a wall, and a slightly confusing one at that. Essentially you can just buy the entire game for around $35-$40, but getting there can take some effort, as there is no 5,000 Picrite bundle. Also, that price seems a bit high for what would usually be a fun downloadable-only title, so many will find themselves not wanting to spend that much on Pokemon Picross.

Pokemon Picross takes two familiar things and combines them into something new and fresh. The 3DS has no shortage of great puzzle games, yet Pokemon Picross can easily stand out among the crowd, especially if you’re a fan of either of its two elements. The free-to-play model works well, though it might still hit your wallet harder than you anticipated in the end. But if you can look past that, or deal with it by just grinding through the game, you’ll find another fun 3DS game to pull out for those random five minute gaming sessions.