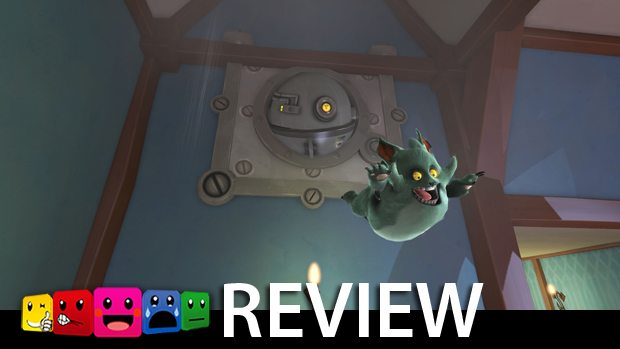 Kim Swift is best known for her time spent at Valve, developing one of the most highly regarded puzzle titles of our generation in Portal.  Responsible for the level design of the game put her in a great position to lead her new project at AirTight Games.  That project is Quantum Conundrum, and it rivals Kim’s previous work in nearly every way.  Considering the lack of games that contain both the polish of “AAA” experiences and requirement of brain power to operate, Quantum Conundrum will likely resonate with those gamers that appreciate being challenged while not sacrificing the presentation expected of current generation titles.

As expected, Quantum Conundrum is very much like Portal.  Many parallels can be drawn between the two games by anyone that has sat down and played both of them.  While puzzles are solved by using different tactics in Quantum Conundrum, there are still some basic traits that pop up in both games.  Using weighted cubes to activate doors to access new areas is a notable similarity.  Your puzzle solving weapon in QC bears an awful resemblance to  the portal gun as well.  Bluntly, if you enjoyed Portal for its puzzle solving, you’ll really enjoy Quantum Conundrum, because there’s enough variation that challenges your brain in new ways.

Dropped into this whimsical world where you play as a 12 year old visiting his scientist uncle, you’ll traverse his mansion in search of him, while navigating through a myriad of puzzles.  Much closer to the original Portal than Portal 2, Quantum Conundrum doesn’t have much of a story to tell.  Your job is to find and rescue your uncle using this newly acquired Interdimensional Shift Device,  while given guidance by the game’s narrator.  You’ll come across weird creatures, and  interesting level design that fill in some of the blanks in the backstory, but if you’re coming to Quantum Conundrum for the story, you may leave disappointed.

The Interdimensional Shift Device is at the core of Quantum Conundrum’s gameplay.  It allows you to shift between the Fluffy, Heavy, Slow Motion, and Reverse Gravity dimensions.  Worn as a glove, the IDS does need to be powered by battery;  each dimension requiring a specific color.  Each level is powered by a generator, and whatever batteries you may find when you enter, can give you a hint on how to go about solving the problem at hand.  Quantum Conundrum starts off fairly slow when it comes to difficulty.  Letting you become familiar with the powers that you have, you’ll be tested with some rather rudimentary puzzles to solve in your first hour or so.  As you progress,  clever puzzles will give you that same feeling of accomplishment as in Portal, and there’s plenty of variation found throughout the game.  With this variation, Quantum Conundrum also relies heavily on platforming in the 3D space.  You’ll need to both solve and execute many of the games puzzles if you want to progress.  This can lead to a bit of frustration after you’ve been put to the test mentally, then again, what puzzle worth solving doesn’t do that?

The overall presentation in Quantum Conundrum  can best be described as light-hearted.  It’s also where Quantum Conundrum differentiates itself from Portal.  The game feels more wholesome, and far less sinister than many portions of Portal.  The color palette and art design are something straight out of Disney, and aside from the difficulty curve, its a title that almost any age can enjoy.  Though the game does deal with the death of your character, and following each death, you’ll be treated with things you’ll no longer get to enjoy because of your unfortunate end.  Professor Qwadrangle is voiced in a mixed performance by John DeLancie.  He hits humor, sarcasm, and informative strides throughout the game and acts as your GlaDOS in Quantum Conundrum.  Dimensional Shifts cause graphical changes in the game, according to which you use, you’ll see varying effects on your environment.

Quantum Conundrum takes alot of the core features of Portal and builds off of them in thoughtful ways, it just doesn’t quite hit the same marks in the story telling department however.  There are plenty of puzzles to engage your gamer brain throughout the 6-7 hour campaign, and there’s a bit of replay value thrown in with the ability to go back and collect hidden items.  More intriguing, it falls into that full-game experience for small price category.  At $15.99 on Steam, it’s a heck of a value proposition.  For console fans, Square Enix has plans to bring the title to XBLA and PSN on July 11th.