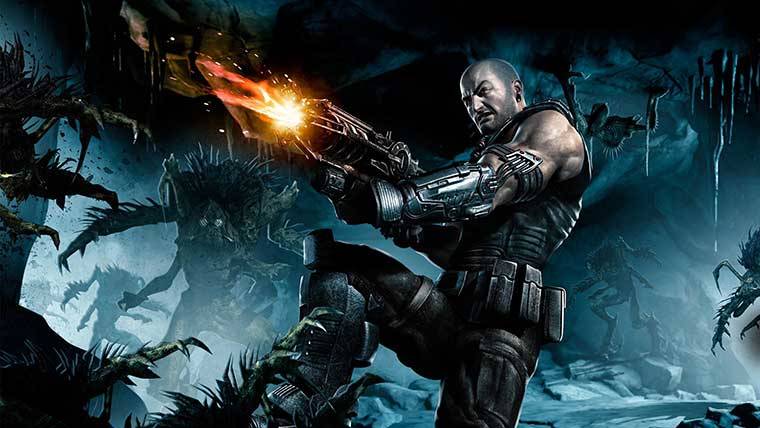 Red Faction: Armageddon places you in the role of Darius Mason, a man born of Colonist and Marauder blood, who must save mankind from an unspeakable evil that has resurfaced. In the latest installment of the Red Faction franchise, you must travel across the storm-blasted Red Planet — and below the surface as you take up arms against a terrifying new force that threatens the sake of mankind. Will you be able uphold your family’s tradition of fighting for the freedom of Mars to protect the settlements against this mysterious lethal force? – THQ

Destruction Returns Just As Good As Before – The phenomenal physics from Red Faction Guerrilla have returned in Armageddon.  The game which is more or less based around the destruction and reconstruction of your environments is again, very well done.  Though some might say it’s a little less consequential than it was in the last Red Faction game, it’s still fun nonetheless.  There are plenty of ways to accomplish your destructive objectives, ranging from hacking away at stucture supports with your trusty hammer, or blasting them to smithereens with well placed grenades.  It’s always fun to take down the structures in Red Faction: Armageddon, which yield some great graphic effects to boot.

Better Single Player Story – Where Guerrilla was more multiplayer focused, Armageddon picks up the slack in the story department.  Depending on which side of the fence you sit, and what type of game modes you like to play, you’ll either be extremely happy or sad to hear that Red Faction: Armageddon is heavily weighted towards the single player experience.  THQ took a b-line away from Red Faction:Guerrilla for some unknown reason, leaving the single player portion of the game to be the main attraction, as well as a linear experience that also differs from its predecessor.

New Fun Multiplayer Modes – Focusing on the destructive side of things, THQ also added some new multiplayer modes into Red Faction: Armageddon’s mix.  While I much would have prefered them to be additions, and not replacements, the new modes are fun nonetheless.  A squad based survival mode headlines the new multiplayer suite and a free roam destruction based mode has you earning points by chaining together destructive combos.  They are both fun stuff, but don’t hold a candle to the competitive stuff from Guerilla.

Plenty of Fun Weapons to Play With – In a game that is built around destruction, Red Faction equips you with a mix of interesting and upgradeable weapons throughout the single player experience.  As you progress through Red Faction: Armageddon, you’ll constantly be picking up new weapons with new destructive powers.  From your traditional hammer that can bring down a building with some well placed chops, to a gun that opens up a black hole that sucks enemys into a vortex, Red Faction: Armageddon’s weapons have a lot of variety.

Great Vehicle Segments in the Campaign – The single player portion of Red Faction: Armageddon is definitely the main attraction here, and what good is any single player experience without vehicle segments?  The vehicle segments of Armageddon are very well done.  Carrying over the main destruction premise from the on-foot gameplay.  The destruction is on a much larger scale, and the vehicles that the game provides definitely convey a great sense of power to the player.  They are arguably the most fun portions of the single player experience, if just for the way that they magnify the destructive possibilities of the game.

What Happened to Multiplayer and When is it Coming Back? – When Red Faction Guerilla launched in 2009, it shocked the multiplayer community with an entirely competent suite of game modes that gathered many fans in the process.  It really appeared that the franchise had found a winning formula, when I found out that Armageddon wouldn’t feature the same modes, I was shocked.  The single player in Armageddon is fun, the online modes that the game does feature are also a good time, but none can deliver the value that a great multiplayer offering can deliver.  Maybe THQ didn’t get the message, but Red Faction: Guerrilla’s multiplayer was awesome.  Why they decided to take it out in favor of a survival mode is something that will leave you scratching your head if you are a fan of Guerilla.

I Already Played Dead Space 2, but thanks – It’s pretty obvious that THQ decided that they are moving in a different direction with the Red Faction franchise.  Both the single player experience and the multiplayer experience are both drastically changed.  Whether you enjoy the changes or not, well you’ll have to play it to find out.  Unfortunately for the developer, the changes that they made, gives the game a feeling that is familiar to those that played Dead Space 2 earlier this year.  Which isn’t bad, because Dead Space 2 was phenomenal.  Unfortunately, Red Faction: Armageddon just doesn’t deliver the levity that Dead Space did.  The tension just isn’t there, and linearity of moving from one dark corridor to the next with little to get your heart pounding leaves the experience feeling a little flat.  There are some really good looking spots in Armageddon, but for the most part, I felt the game was full of dull sequences that aside from the thumping soundtrack were pretty boring.

You’re Supposed to Remove the Bad Stuff – You’ve established a franchise, earned a bunch of fans in the process, and spent years developing a brand.  Why try and reinvent the wheel?  Red Faction: Guerrilla was a great game, furthering a franchise is about offering fans of the previous games a reason to return, but learning from the faults of the previous games, fixing them, and incorporating new features.  Unfortunately, the developers believed that the only good thing from the previous games was the ability to destroy buildings.  Because there’s not that much Red Faction in Red Faction Armageddon.  The developers did a great job with incorporating a much bigger and more cinematic single player experience, but it was not without a cost.

Obviously from the tone of this review I thought that Red Faction: Armageddon wasn’t very good.  If you’re a fan of Red Faction: Guerrilla you’re probably going to be disappointed in the drastic changes made for Armageddon.  If you’re new to the franchise, and like linear single player experiences, Armageddon is a pretty decent game.  You’ll likely be thrilled with the many weapons at your disposal, and the physics are once again incredible.  The story is bearable, and plays second fiddle to the action, but there’s enough of both to keep you interested.  Though that’s about where the fun stops for Armageddon, the new online modes have short life-spans and do little to keep you coming back for more.  As a fan of Guerrilla, I couldn’t help but think of the possibilities that this new game held when comparing it to their last offering.  I’m not sure why the game took such a drastic stance in the new design perspective, when it already proved it had a winning formula.