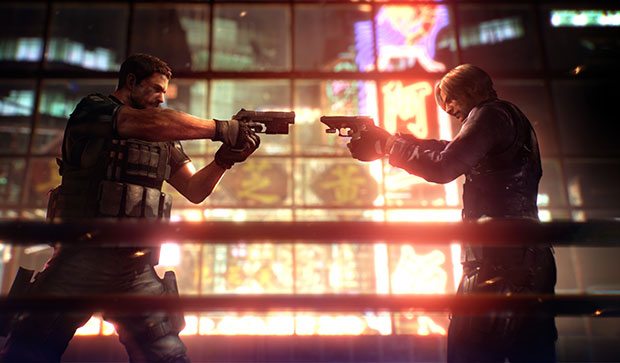 There was a time when the words Resident Evil were synonymous with survival horror. Capcom created a genre of its own with their mid-90’s releases of the original games on the PlayStation. Over the years, the publisher has migrated further and further away from what distinguished this franchise from other third person shooters, and even more so with Resident Evil 6. To be fair, Capcom was up front with their intentions of wanting Resident Evil 6 to appeal to more players. Hardcore fans saw the signs on the wall, and only had to look as far as Resident Evil 5 to see what was on the way.

True to their word, Capcom delivered a Resident Evil game that is more appealing to all types of players. Let’s face it, survival horror isn’t for everyone. Their game plan was to break up the campaign into four distinct mini-campaigns with a duo tackling each branch of the storyline. While it may have been their intention to appeal to different gaming tastes with each story line, it was not well executed. Each of the four campaigns feels familiar to the other, tied at the hip with tiring quick-time events, sloppy controls, and a camera that you’ll be wrestling with nearly as much as your zombie foes. 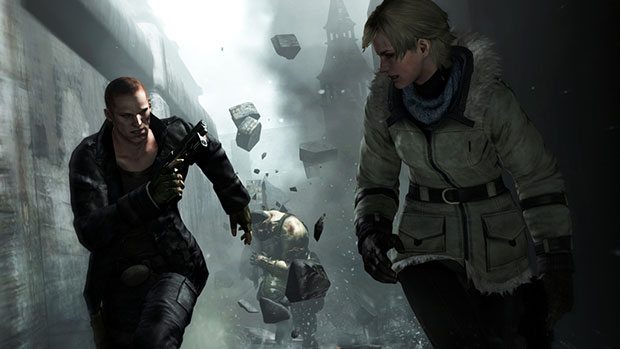 On the brightside, fans of the franchise will feel right at home with the story for Resident Evil 6. It’s delivered largely through very well made cinematics that blend into the actual gameplay quite nicely. The story in RE6 is actually the highlight of the game in our opinion. It’s told from the unique perspective of whomever you choose to play the game with. You’ll cross paths with the other protagonists, the mysterious Ada Wong, and learn more about the over-arching plot with subsequent playthroughs through the eyes of other characters. It’s one of those games where you kind of start where you finish, and it comes to a head in true Resident Evil fashion.

The branching storyline of Resident Evil 6 covers a lot of territory. It tells the tale of many of the characters from the first five games, and calls back to numerous spots that fans are sure to enjoy. The story really isn’t the problem with Resident Evil 6, nor is it the characters that Capcom chose to include in this sequel. It’s just about everything in-between the brilliantly crafted cinematics that weighs the game down. While the distinct campaigns pretend to offer differences from one another, they feel largely the same in the way that they are played, outside of the characters you are controlling. Loaded to the brim with quick-time events, Resident Evil 6 just isn’t as much fun to play as it is to watch. The “new” gameplay mechanic of moving while shooting is a welcome addition, but now allows Resident Evil 6 to be compared with better, more capable third person shooters. At your disposal is your arsenal of weapons, a cover mechanic, and your fists of fury. You’ll pick up increasingly powerful weapons throughout your time in the RE6 campaigns, and the gunplay is pretty standard for the franchise. Aim for the head. Ammunition isn’t as scarce as it has been in previous games, but its still a commodity that shouldn’t be wasted. You’ll learn to utilize your melee attacks often, and to dip into cover when available if you can ever get the unwieldy cover system under grasp.

I’m sure that somewhere in the research stage of this game, quick-time events were found to be what players wanted. Gameplay in Resident Evil 6 is so squarely locked in at delivering a third person action game experience, that it throws all survival and horror aspects of the game out the window. Instead, what you are left with is a countless number of partner sequences and quick time events that simply impede any flow that the game tries to establish by prompting you to action at every step. They are overused to a fault, and the result is that they feel less consequential than they should. Some of the partner sequences where players are separated are actually decent with a human partner. Races against the clock where players will need to fend off enemies on their own, while the other player rushes to open a door for the other are not bad, but used more than once in every campaign.

These tired mechanics are found throughout each of the four campaigns. Broken down into pairs of two, the story of Resident Evil 6 is only truly unfolded completely once you’ve completed each of the storylines. Leon Kennedy teams up with Helena Harper in a campaign that most closely resembles the franchise’s past efforts in both gameplay and story. Where fans will likely see the biggest deviation from the Resident Evil formula is in the Chris Redfield and Piers Nivans storyline. This campaign resembles any other middling 3rd person military shooter. It highlights the game’s shortcomings because the gunplay of Resident Evil 6 is good when geared towards enemies that are swinging sticks or melee weapons at you, but not when your enemies are shooting back. Here you’ll likley find the most problems with the game’s camera and controls where accuracy and time are of the essence. The Jake Muller and Sherry Birkin storyline is more similar to Leon and Helena’s campaign thankfully, but the real issue is that by the time you get to its conclusion, you’ve been here and done that. Each of these teams cross paths with each other in their separate storylines. Meeting along the way turns out to be one of the best ideas that Capcom had in delivering a cohesive and unique Resident Evil story this time around. 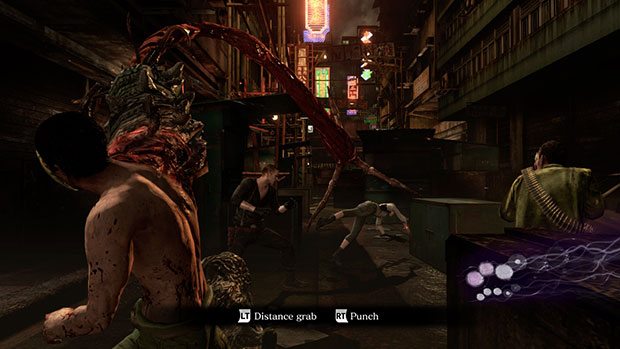 That said, Resident Evil 6 is much better with a friend. Actually, any kind of co-op in RE6 is much more rewarding than the single player experience in this game. Capcom does a good job at integrating the online components of Resident Evil 6 in new ways, and teaming up with other players online is a fast and easy task. Depending on the settings you choose when you start your game, you can meet up with other duos online to complete crossover points in the story where characters cross paths. This definitely shakes things up a bit, and even more so does the “Agent Hunter” Mode. Here you allow real players to control enemy characters in your game giving the experience a nice difficulty spike if you are so inclined. Controls for the enemy units are not quite to the point of Left 4 Dead mastery, but its a welcome inclusion nonetheless. Mercenaries also makes an appearance in Resident Evil 6, the popular time based mode allows you to fend off zombies in a horde style offering that relies purely on the game’s gunplay for kicks. Wrapping together the online offerings for Resident Evil 6, the netcode feels solid. During our review we constantly left our connection open for any players to join, and when they did, there was no noticeable difference in the way the game played.

Despite these new offerings in Resident Evil 6, the core gameplay just isn’t very fun. Completing the entire campaign with all four storylines is a massive undertaking. Not only because these five act campaigns are each massive in size and require a significant time commitment, but are so alike in their gameplay that it becomes tiresome to carry on the adventure. Resident Evil 6 is a sharp looking game, that has a cinematic style that few other franchises can match. It’s just a shame that its all put to such a waste in a game that’s largely forgettable because of sheer repetition. The game frankly doesn’t live up to the high expectations that the title on the box and its lengthy list of predecessors warrants. Where Resident Evil 6 should be leading the pack, it feels like its perfectly comfortable taking its cues from other games because of their popularity and mass appeal. The problem is, by doing so, Resident Evil 6 very rarely plays to its strengths in the process.