The latest news in the world of video games at Attack of the Fanboy
May 25th, 2014 by William Schwartz 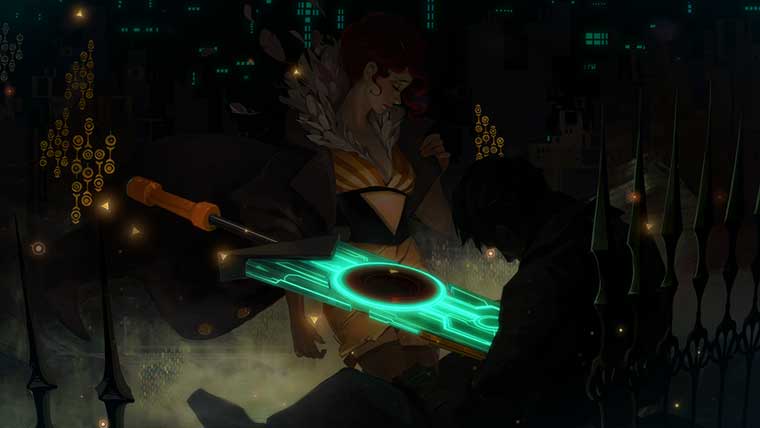 Supergiant Games sophomore effort, Transistor, is a game that keeps you guessing. While at face value Transistor may look like a game that borrows from Supergiant’s 2011 release of Bastion, it’s actually anything but a rehash of old ideas. It’s a more ambitious game, one that has confidence in its players intelligence. One who wholeheartedly believes that the aesthetic hook will keep you around for its more cerebral elements.

Transistor is unashamedly cryptic in its story telling and stubborn in teaching you even the basics of what this deep game has to offer. While it’s the player’s cross to bear, that’s part of what makes Transistor great.  What’s clear is that Bastion was no fluke, there is serious talent at Supergiant Games. The small team’s prowess in creating visually stunning worlds that look and sound incredible, is undeniable. Though what was missing from Bastion was depth to accompany the aesthetic and story, and with Transistor, they’ve gone to the other end of the spectrum.

Transistor is a mysterious love story at its core, one that provides plenty of opportunity for player interpretation.  Its story is told in bits and pieces during the 3-4 hour playthrough, through narrated cutscenes, contextual narration as seen in Bastion, and through Terminals scattered throughout the city of Cloudbank.  You play as Red, a celebrated entertainer in the city whose voice is stolen from her. You pull a mysterious sword, known as The Transistor, from a body in the opening moments of the game. You’ll need it to fight off The Process, and the organization pulling their strings, the Camerata. From there, it’s a story best worth experiencing on your own, and anything more on what the sword is, and why you have it, would likely be taking away from the experience.

Transistor’s presentation rivals Bastion in its beauty, and it’s probably the most similar aspect between the two games. The art has a hand drawn feel to it, and color is used masterfully to paint Cloudbank as a place you want to get know better. Narration and music are used effectively, and again, those who played Bastion will at least find some similarity between the two games. Narrative queues are similar to the system that was seen in Bastion, contextual bits of information color the world at opportune moments, and music sets the overall tone. Without the combat system in Transistor you could make a case for sightseeing in Cloudbank, its a beautiful game.

Transistor isn’t just about sightseeing though. You’ll encounter plenty of resistance on your journey, where you’ll need to fight The Process looking to impede your progress. The Process come in a number of forms, who are gradually introduced to you as you progress through the game. 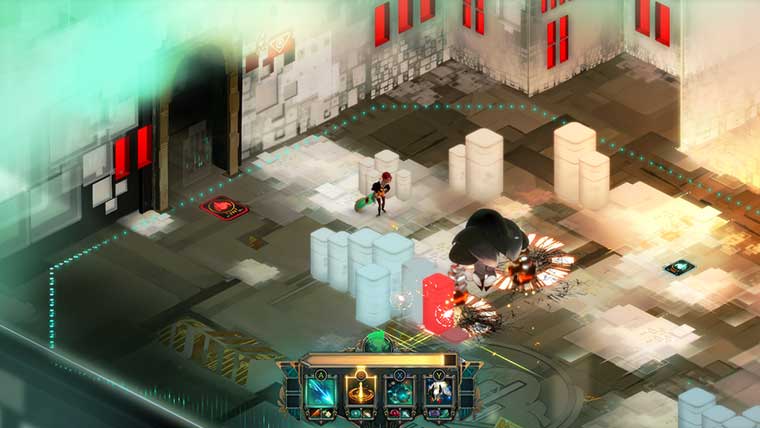 Transistor has  a deep combat system that uses a leveling and upgrades path to introduce different attacks to the player, which are used in a quasi-turn based scheme. The Transistor sword that Red carries allows for her to stop time, and queue different functions of the sword in battles against The Process. Or, you can just fight opponents in real time. Choose the former, and you’ll need to spend a turn. Each turn will allow you to see the effects of your input before you commit, how much damage you’ll do, and you can remove and add functions as you find the most optimal string of attacks. 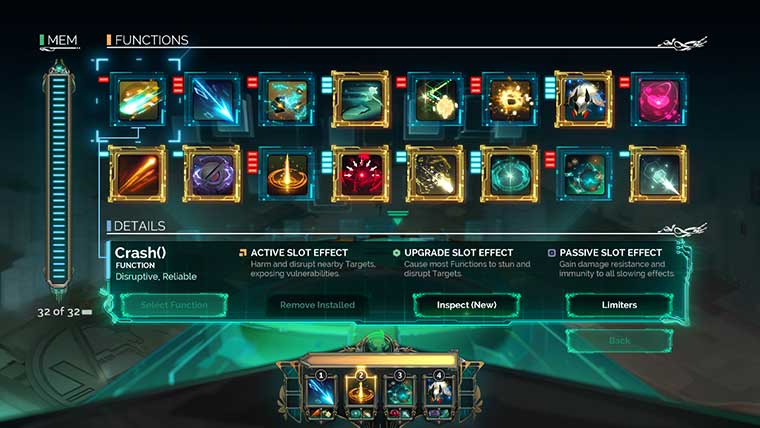 The depth of Transistor comes into play as you start making your way through the game’s leveling system. As you level-up, you’ll earn new functions, which serve as abilities that the Transistor sword can perform. There are 16 functions in total, and they can all be used as Active, Secondary, or Passive Abilities. Active abilities are the ones mapped to the buttons on the controller, press the button and you’ll see its results. Stack another ability in the passive slot and that function will provide added benefit to your attack. Transistor allows for you to mix and match to your liking, and the possibilities are exponential. Continue to level up and you’ll earn additional slots to stack abilities, creating even more possible combinations. 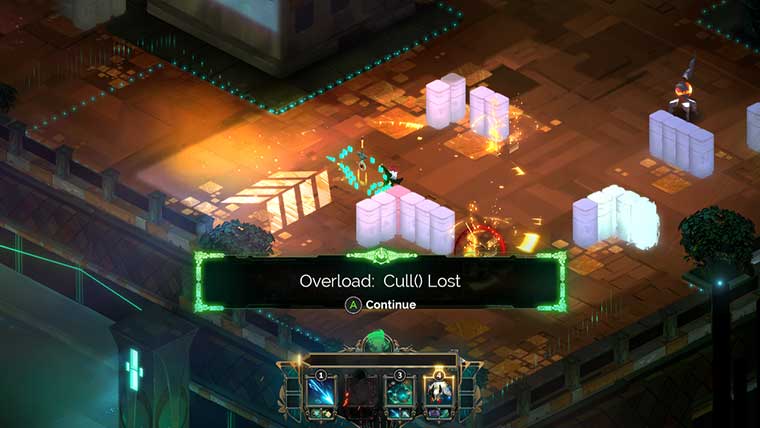 Where Bastion had decent combat, and large system of upgrades and weapons in itself, it was easy to stick with a certain combination of weapons once you found a good one. In Transistor, the game forces you to switch it up from time to time. Dying is hard in Transistor. On your first playthrough, you’ll likely only die a few times at most, but it’s not hard to lose a function. It’s the equivalent of dying. If your health is drained, you’ll lose the ability to use a function in that battle. Once you lose all four functions, you’ll have to restart. But you don’t just lose it for that battle, you’ll lose it for the next one as well. So you’ll need to hit an Access Point, which allows you to add a new function to The Transistor in place of the other. It’s a neat system that encourages you try different things. Though the combat for the first playthrough isn’t all that tough, it isn’t until New Game Plus where the game throws any real challenge at you. 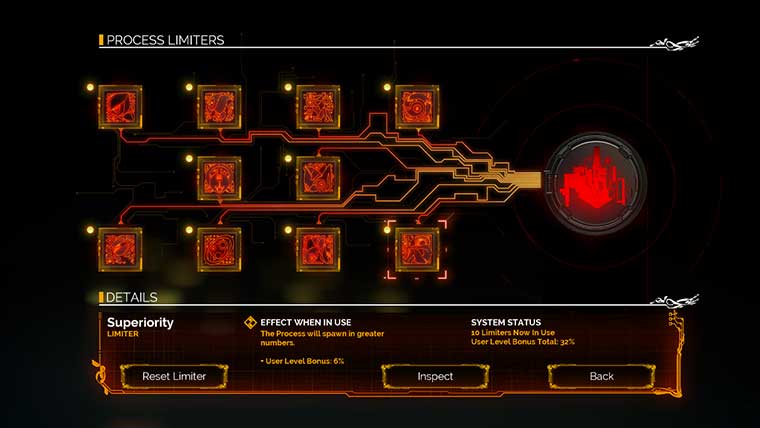 There are an entirely optional set of Limiters that can used at any time though. These Limiters all have varying effects on the gameplay, and make it more difficult. The reward is that you get a bonus towards leveling your character. The more you level up the more functions you have, and access to memory points that allow you to stack more functions on one another. Limiters themselves are earned by leveling your character. By the time you finish the game, you should have access to a number of different Limiters, by the end of New Game Plus, you should have them all. Well, that is if you stop and smell the roses in Transistor.

A lot of what fills in the blanks in Transistor is entirely optional.  Terminal are scattered throughout the game which add color to Cloudbank, but you’ll need to seek them out. Spending time in the optional Backdoor areas, and looking for all of the interactive points on the map will fill you in on who Red is, and what her life was like before this journey began.  Being optional, these things can be blown by, without you even knowing. 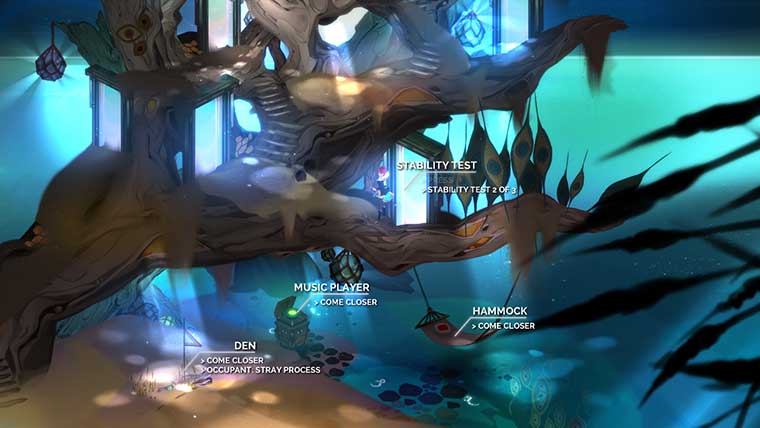 There’s a good bit of side content to be explored in Transistor, and a lot of it comes from the Backdoor mechanic which serves as a central Hub for Red. Here she can bide her time in this beautiful locale and listen to the music of Transistor. Play challenge modes that serve as introductory and mastery courses for the combat mechanics. As the story progresses, you’ll find numerous backdoor entry points, which will allow you to tread deeper into the challenge system. The challenge system has a number of different types of events, which get progressively harder. Beating them will let you unlock the entire soundtrack for the game. Though more importantly, it lets you get more time with the combat system, which is arguably underused if you mash straight through in a linear fashion.

There’s also a new game plus mode when its all said and done, but a lot of the mystery is gone at that point. Transistor is worth a second playthrough for the more difficult default mode, but there’s really less incentive for tracking down all the game’s terminals and story seasoning on the second playthrough. New game plus in Transistor is really just a mode that will test your proficiency in the game’s combat sequences. There’s little if anything added to the story. Still, even the New Game Plus mode wasn’t all that hard, for those that really seek out a challenge, you’ll need to use the Limiters mentioned above.

Transistor leaves you wanting more in the way that good games do.  Its story is thought provoking, its world stylish.  The gameplay systems are smart and fun to use.  Transistor is more content in leaving you with questions rather than tying things up in a neat little bow. While the combat system itself is the real star of the show, Red’s journey through Cloudbank is definitely one worth taking.