The latest news in the world of video games at Attack of the Fanboy
April 1st, 2012 by William Schwartz 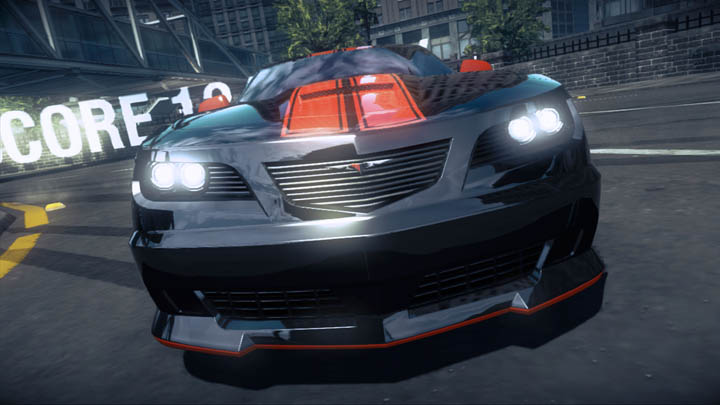 The Ridge Racer franchise has had its ups and downs over the years, but one constant trait that it has had, is its dedication to arcade style racing. Enter Ridge Racer: Unbounded, the latest racer from Namco and BugBear. A new level of environmental destruction, vehicular combat, and drift based gameplay take the franchise in an unfamiliar direction, more in the spirit of Bugbear’s previous efforts in the Flatout series.  Bugbear sets the backdrop for Ridge Racer: Unbounded’s violent racing taking place throughout Shatter Bay, as gangs are vying for control of the city streets.

These gangs are fighting with cars, and looking to leave as much destruction as possible, in their wakes.  The fictional setting of Shatter Bay provides the perfect backdrop for this unconventional Ridge Racer title, giving you more than enough hazards to plow through, hairpins to drift through, and finish lines to race towards.  Long gone are the traditional Ridge Racer mechanics in Unbounded, given some obvious liberties in their design of the game, Bugbear’s latest creation feels entirely out of place in the Ridge Racer franchise.  If you were looking for a traditional Ridge Racer experience in this title, look away now, because you will not find it here.

Ridge Racer: Unbounded lives and dies by its core gameplay mechanic of building a boost meter.

What you will find is a game hell bent on a more action-oriented and cinematic approach to arcade racers.  In the spirit of Burnout, Ridge Racer: Unbounded lives and dies by its core gameplay mechanic of building a boost meter.  It’s your always constant goal to increase and charge this power bar, because without it, the game is just another arcade racer.  You can do this by performing a number of different actions in-race.  Tailing other racers, causing destruction, or drifting around corners will earn you points on your power meter.  When full, you’ll be able to “frag” other racers, open shortcuts by barrelling through walls, or set off traps to impede other racer’s progress.  Easy enough as it sounds, you have ample opportunity to earn these boost points, but the real key to mastery is stringing multiple boosts together.    Chaining frags, destruction, and drifts you can theoretically earn continual boosts which will allow you to continue chaining or make up time on racers ahead of you.  The boost mechanic makes Unbounded a frantic, fast paced racing experience that always has you scouring for ways to fill up your meter.

This mechanic is taken with you in nearly every game mode in Ridge Racer: Unbounded, online and off.  Playing the single player campaign will have you Dominating Shatter Bay, unlocking new pieces of the city to race through as events are completed.  You’ll become familiar with the events of each zone which feature different variations of this boost building gameplay.  Domination Races have you battling it out with eleven other racers using all of the game’s trappings to make it from point A to point B, before anyone else.  Variations include straight up racing, time attack modes, frag attacks (where you are scored on how many takedowns you achieve), and others.  The surprisingly smart A.I. in the single player portion of Unbounded makes it quite enjoyable when compared to other racer’s single play portions.  A.I. racers don’t hesitate to take you down, and you’ll need to use your boosts wisely to get to finish line first, or reach your target score.

Taking what you’ve learned to the online arena, Unbounded offers quite a few options here as well.  You can play traditional multiplayer experiences by racing against others in Quick Matches on the Shatter Bay map, or you can play in Domination Matches which will allow you to race in user-created cities.  All players can create their own cities in Ridge Racer: Unbounded.  By unlocking pieces of track editor content you can build custom cities, set challenges for the online community to perform, and race against friends or online acquaintances.  Building cities is a snap, square tiles are placed onto a racing grid and can include any number of twists, turns, and hazards  to navigate.  After you conquer Shatter Bay, there are hundreds of user created cities to explore in the online community of Ridge Racer: Unbounded.

Repeated track sections make unlocking new areas uneventful as they feel awfully familiar to one another.

All of these features are for nothing if the core experience isn’t fun, and thankfully it is.  Ridge Racer: Unbounded is a game which is indeed friendly to the pick up and play arcade racing gamer, but definitely offers rewards for sticking it out, learning the tracks, and mastering drift techniques.  Cars have varying attributes and can really affect the way that a given course should or can be driven.  At its craziest, Unbounded will challenge even the most dexterous gamers.  As good as this franchise reboot turned out for Bugbear and Namco, the game definitely has its low points however.  Shatter Bay has a distinct visual style, but unfortunately there feels like a lot of reused assets in the game.  Repeated track sections make unlocking new areas uneventful, as they feel awfully familiar to one another.  More color in Shatter Bay could have brought the city to life, but as it stands it feels somewhat dull when something’s not blowing up. Furthermore, there’s little customization outside of selecting paint color for your vehicle.  With so many racers these days offering robust customization editors, it could have brought a personal touch to online portion of the game.

It’s not perfect, and it doesn’t even really feel like a Ridge Racer game, but Unbounded is one of the best arcade racers in years.  It’s nice to see that publishers aren’t completely abandoning the genre, and with some luck, others will follow BugBear’s lead and continue to evolve long running franchises in meaningful ways.