The latest news in the world of video games at Attack of the Fanboy
January 12th, 2017 by Maxwell Majernik Seeing mobile developers dip their toe into traditional games is always exciting. They have a unique perspective on gameplay and structure, since the hooks on a mobile audience are completely different than traditional gamers. Supermegateam, after their successful mobile games Supermagical and Pro Zombie Soccer, is next in line in releasing a Xb1/PC game with the ‘think and gun’ game Rise & Shine.

Rise & Shine takes place on the peaceful world of Gamearth. Everything changes when the space grunts, from Nexgen, attack the planet. During the attack, Rise, the main character, is given a sacred gun, Shine, in an attempt to save Gamearth. From that story summary, you can make the assumption that R&S won’t be taking itself very seriously. That is mostly true. There is a weird push-pull presented with the narrative and presentation that creates an uneasiness. The game begins with a somewhat graphic shooting of innocent people inside a shopping mall. Not something I expected in a game, even if it isn’t being shy with violence.  R&S does lighten up and becomes more of a ‘buddy movie’ story of wise cracks and making fun of common video game tropes. Throughout the game, there are graphic depictions of death, one spot of people hung stood out, and it detracts from the experience. There is a heavy handed approach, both to the parody and the violence, that makes the world not as enjoyable as it should be. That isn’t to say the presentation is a complete miss. The character designs of the main characters and enemies are on point. Rise & Shine are both fun designs and effectively meet in the middle of past and new gen influence. The bosses have a larger than life look and are full of moving parts and intricate design.

Like the setting, the game play is a mixed bag. For a shooter with a high difficulty level, the controls need to be flawless. I never got to the comfort level with the controls where it felt like a true 1:1 of fingers to screen. The jumping felt off, and sometimes the input dropped on platforming sections. Another feature is the dash, which has odd restrictions placed on it. The dash had a cool down that was just long enough that it killed momentum. Also missing was any kid of mid air dash or jump moves. Without any kind of vertical movement aside from a double jump, the game felt very grounded. The shooting mechanics were fine. By the end, I was comfortable in the more challenging areas. The lob mechanics were tough. Some of the moments with the grenade lob were closer to lucky shots than my skill with the game. In a game like R&S, I want to feel like my skill level is the reason for progress, not trial and error.

Gameplay is a mixed bag due to controls

Difficulty is a staple in this new generation of 2D games, and this one does not disappoint. They put you into the fire at the very beginning and never let up. I was never stuck in one spot for too long, and aside from fighting the controls, I never thought the challenge was unfair. The checkpoint systems are forgiving and never force you to retread too much before getting to the previous death spot. Another feature essential for die-a-ton game is a quick reload after death. R&S is snappy after death and got you back into the fight with barely a break. My only issue was that the gun settings would not reset after each death. If I tried a weapon combo, unsuccessfully, and died, then that weapon combo would stay as my current setting for the next run. Rushing into the battle again, I would forget I had the wrong weapon combo and took another death, before I remembered to change it for the third time. Not a huge issue, but in a game that wants you to churn out run after run, every time that I had to break focus took me out of the experience. 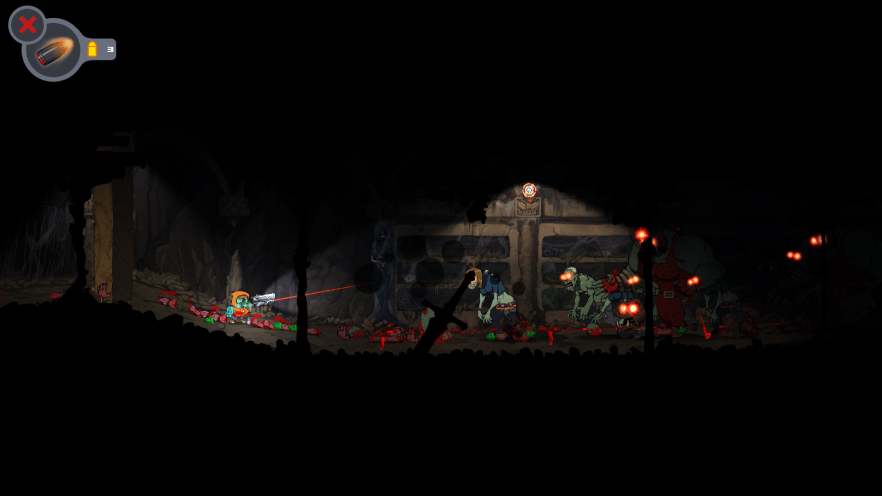 Rise & Shines truly is at its best when the screen, and the world, opens up. When the scale increases to give Rise the ability to run through the entire screen, it lets all of the best parts of the game, the level design and mechanics, sing in harmony. A perfect in-game example, while not revealing too much in spoilers, is a set piece where you have to re-energize a stopped heart. With enemies crawling out from every corner of the screen, Rise has to dodge projectiles while using different ammo types to get to the end goal of a beating heart. With more of the screen opened up to run around in, I felt more comfortable with the dodging and jumping play style given to me. The enemy design is so strong,  that even when the characters were smaller, I was able to distinguish what type of enemy they were quickly enough to use the appropriate strategy for combat. To top it off, there is a beautiful background to fight in front of. With more room to breath in-game, the imperfections of the controls smooth out, and it feels like the vision of the game is fully realized.

You might find some bugs but nothing game breaking

I played Rise & Shine on a PC using an Xbox 1 gamepad. I experienced a few bugs while playing, but none were game breaking or halted my progress; the bugs were all visual. On a few occasions, I had timers that couldn’t count down or stat counters that wouldn’t count. They must have still been working on the back end, because those moments still advanced and didn’t hang up. I also experienced some color issues where the sky would change colors for no reason, but once again, nothing game breaking. 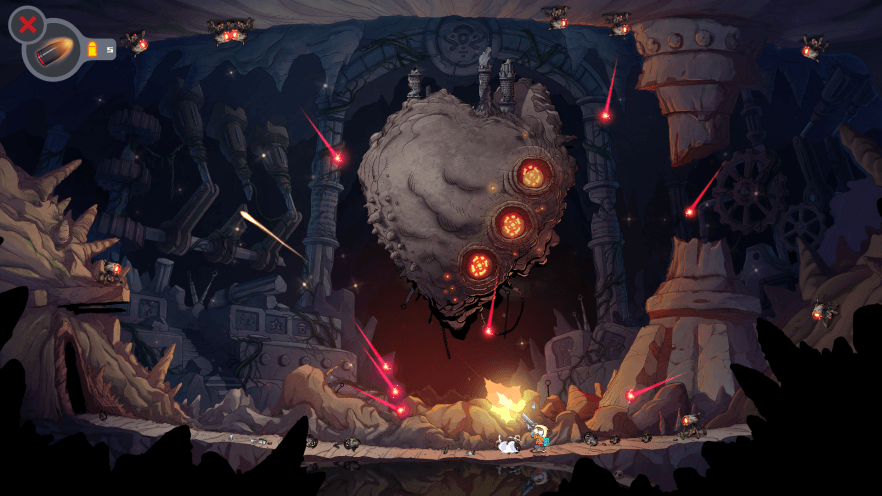 My play through took 3-4 hours, including all of my many, many deaths. When I first walked away, I felt like it should have been longer. After sitting on it for a day, I think it is a solid length. No chapter or setting wore out its welcome, and I never felt like any of the areas were padded with repeat puzzles. Adding any filler would have cheapened the areas and puzzles, so I agree with SuperMegaTeam’s ‘less is more’ mindset. There was an extra level of difficulty that opened up after the game was completed, and there are small collectibles in each area. I could imagine a few extra hours could have been had, but not much. R&S does have a very well put together chapter selection screen, so you can go back and enjoy any of the varied levels.

The Verdict on Rise & Shine

Rise & Shine is a fun game with some exhilarating moments of combat. It is rough around the edges in many areas, but I walked away from my playtime feeling satisfied. At its price point, Rise & Shine is definitely worth it for fans of the genre. (3/5 Liked)