Scott Pilgrim vs. The World: The Game – Complete Edition Review

The fan favorite finally gets another chance at life. 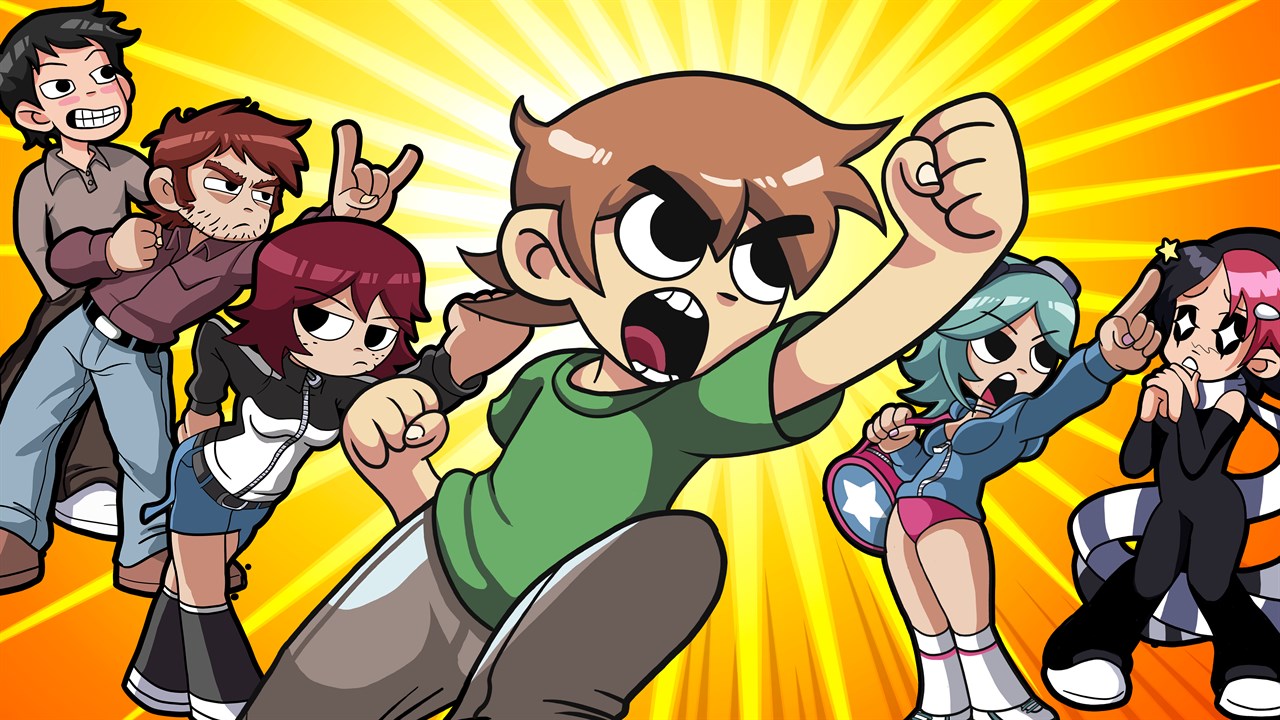 The Scott Pilgrim graphic novel series debuted in 2004 and ran through 2010, the same year that a film based on the series was also released titled Scott Pilgrim vs. the World. Alongside that release came a game exclusively for PlayStation 3 and Xbox 360 from Ubisoft that was based on the graphic novels instead, which was later delisted and made impossible to play for those that didn’t already own it. Fans of the game have been asking for a re-release for years now and that has finally come to fruition with the release of Scott Pilgrim vs. The World: The Game – Complete Edition.

Scott Pilgrim vs. The World: The Game – Complete Edition is just as it sounds, a complete version of the game that includes the extra DLC that was added after the original game’s release. The game itself though is just as you remember it, as there really isn’t much that can be done to improve upon the 2D graphic novel-esque visuals. That is not a knock on the game at all either, with the art style holding up quite well today. This is combined with a thrilling soundtrack that is still a pleasure to listen to this many years later. The story found in the game is a loose retelling of the events of the graphic novels, where Scott and his friends must battle his new girlfriend Ramona’s seven evil exes. Besides the boss introduction information and short unvoiced cutscenes, you may feel a little lost with the story if you have no outside context for what’s happening. This is why the game serves as a great companion to the graphic novels or movie if you are one that wants the full experience.

Just like before, Scott Pilgrim vs. the World: The Game – Complete Edition features a fairly small world map for you to explore, which opens up the more you play it. On this map are spots with numbers next to them, which are the start of each main level, with varying numbers of additional areas within them. There are seven of these total, so you shouldn’t expect too long of a game overall. After completing the full stage and defeating the boss, you can go back to specific parts of the stage, rather than having to start from the beginning every time. This is very important when it comes to one aspect of the game that will be discussed a little later when it comes to character upgrades.

Within each of these levels, you will control your chosen character between Scott, Kim, Stills, Ramona, Knives, and Wallace and work your way to the other end of the stage, with the latter two being included from the start instead of as DLC this time. The setup here is your typical side scrolling beat ’em up, where you must continually defeat enemies that get in your way until you make it to a boss at the end. These boss battles are all a lot of fun, with them escalating in difficulty the more damage to deal to them. 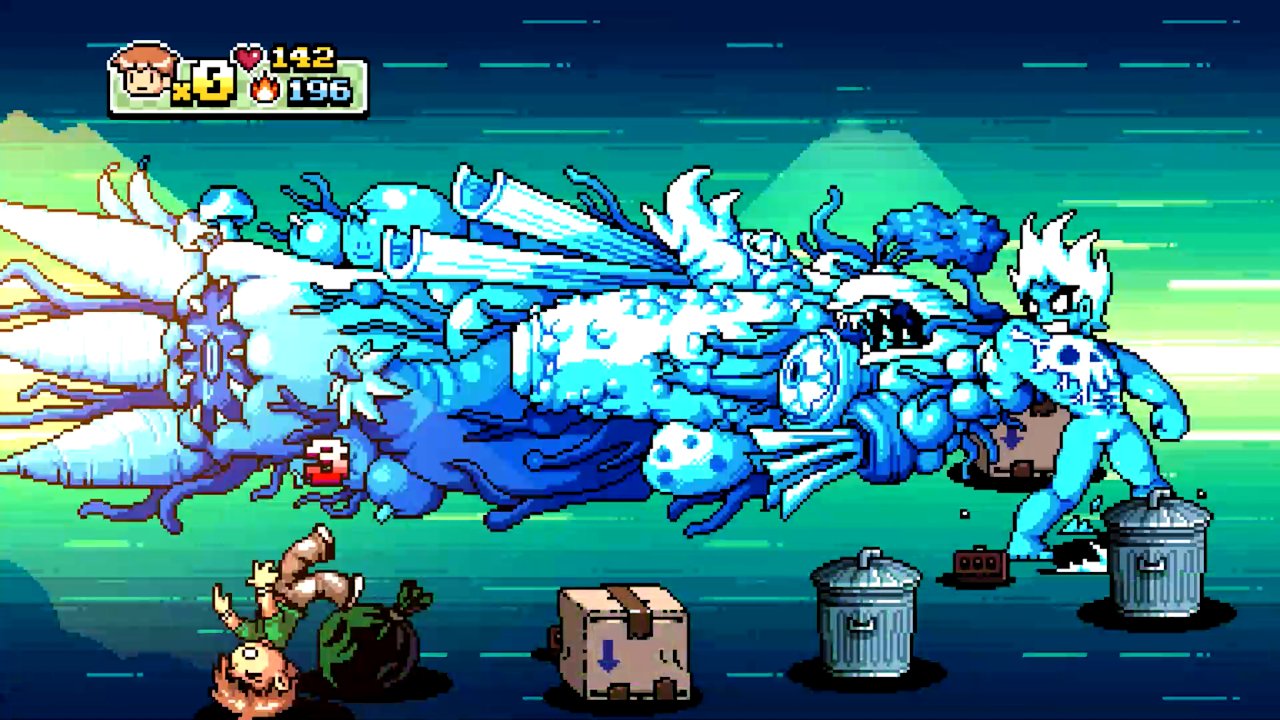 Regardless of which character you choose, you have the same general moveset that includes a fast attack, a strong attack, a block, and a jump. You can also summon Knives with the press of a button or use a super attack that is specific to your chosen character. Both of these moves utilize something known as Gut Points, which play greatly in the game’s stat-based system.

Scott Pilgrim vs. the World: The Game takes a lot from the River City Ransom series, not only in some of the designs, but also with the gameplay structure itself. Each character in the game can be leveled up to level 16, with each new level unlocking a special ability for that specific character that they can use in battle. Besides that, there are stats for each character that you need to work on building up throughout the game.

Health in the game is represented by a heart, while you also have what is known as Gut Power that is represented by fire. When you run out of health, you will regain health by halving what your remaining Gut Power is until you run out of both. On top of that, there are four stats that are very important, including Strength, Defense, Will Power, and Speed, all of which must be upgraded during your playthrough if you want to survive. This is done through the bevy of in-game shops found throughout the game. You will come across these during random parts of stages, but you can also always go directly back to the Shopping District near the beginning of the game to go to the shops. This makes the ability to visit specific areas all the more important as mentioned prior. 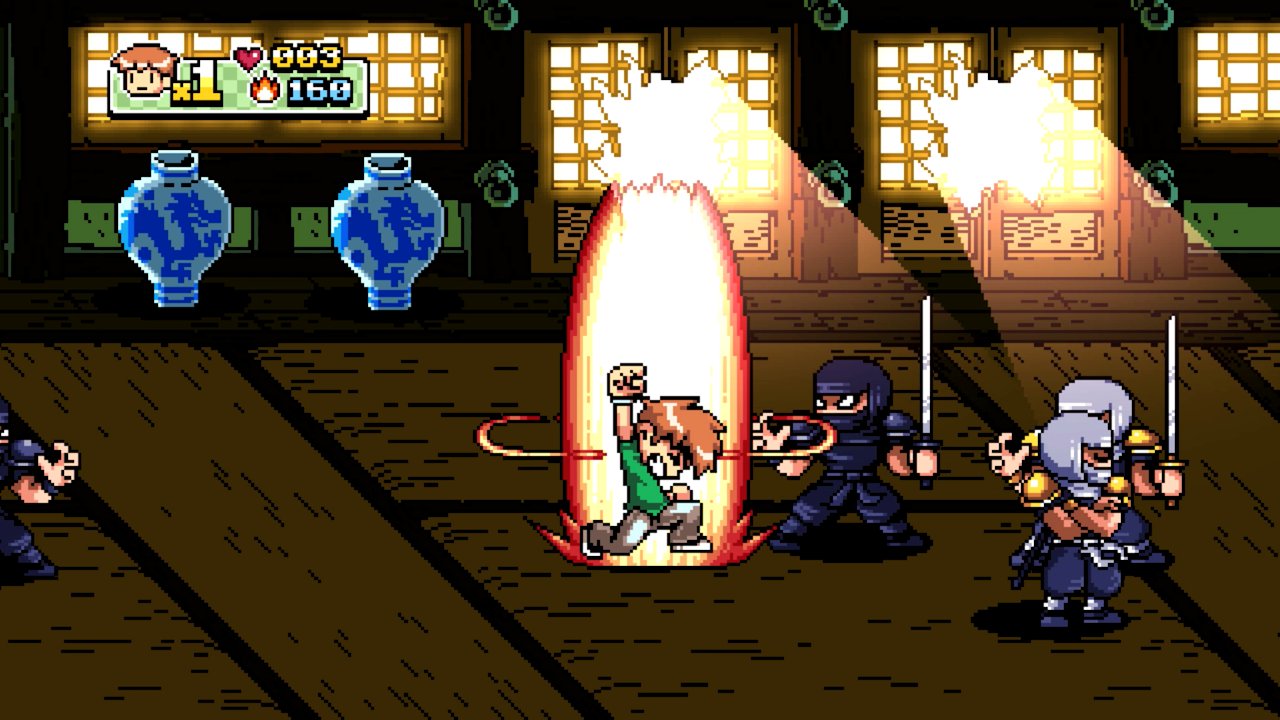 By spending the money you earn in the various stages, you can purchase things like records and books for large stat upgrades or food for smaller health restoration and smaller scale upgrades. The frustrating part though is that you cannot see what each of these items does stat wise until after you purchase them, so you have to do a lot of trial and error to figure out which ones you should be getting. You can eventually max out the various stats, so those who are struggling can grind for money and upgrade their character until they are strong enough.

Scott Pilgrim vs. the World: The Game – Complete Edition also has three difficulty levels for you to choose between, which helps you to tailor your experience to just how you want it. For some reason you are not able to change the difficulty from the world map, but can exit out entirely and then select the difficulty upon loading up your save again.

Beat ’em ups are always best enjoyed with friends and this game is designed just for that with up to four player local co-op being easily accessible in the game. There are some exclusive co-op features, including the siphoning of lives from other team members and even a special attack involving the band. On top of that, this re-release has online network play right from the get go, rather than as DLC like in the original release. This can also be done with up to four players in either public or private matches. While this can be fun, actually experiencing the game in the same room together is definitely the ideal experience. 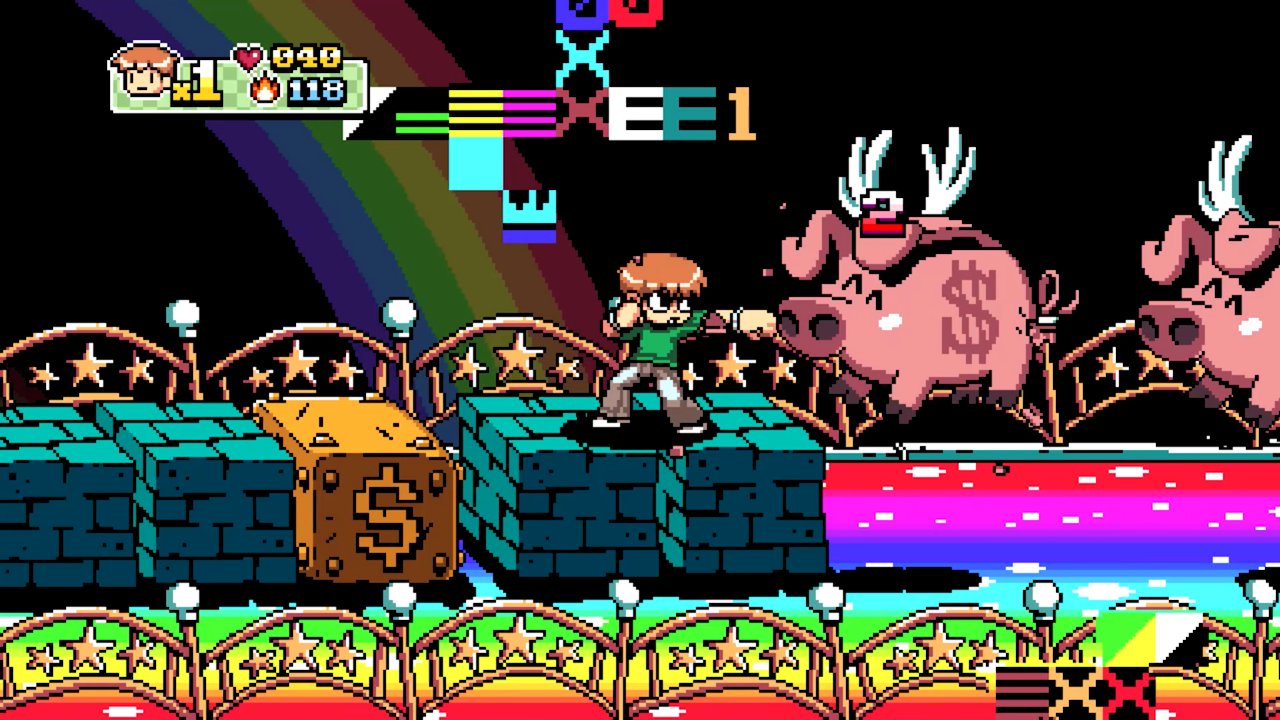 Also carrying over from the DLC for the original release, this version includes four extra game modes for you to enjoy. This includes Boss Rush, Survival Horror, Battle Royal, and Dodge Ball, all of which can be played single or local multiplayer depending on the mode. Boss Rush is a gauntlet run through the bosses in the game. Survival Horror is your typical survival mode where you just see how long you can stay alive. Battle Royal requires another local player to participate, where you square off against one another. Dodge Ball takes the basic gameplay and adds in a dodge ball that you have to use to knock out enemies. Each of these can be pretty fun, though you will likely get bored of them pretty quickly.

Scott Pilgrim vs. the World: The Game was one of the more difficult to play games from the PS3/Xbox 360 generation due to the fact it never even released on PC, but now it is back again on many new platforms. Rather than working on new content for the game, Ubisoft instead decided to just take the existing game and package the DLC into one release. While this may be a little disappointing for some, Scott Pilgrim vs. The World: The Game – Complete Edition is well worth checking out for anyone that missed it originally or just has been wanting to replay this cult classic.

There may be no new content besides the previous DLC being included, but Scott Pilgrim vs. the World: The Game – Complete Edition takes what was already a really fun beat ’em up and makes it all the more accessible to a whole new generation of gamers.

Scott Pilgrim vs. The World: The Game - Complete Edition