The latest news in the world of video games at Attack of the Fanboy
September 21st, 2017 by Jelani James 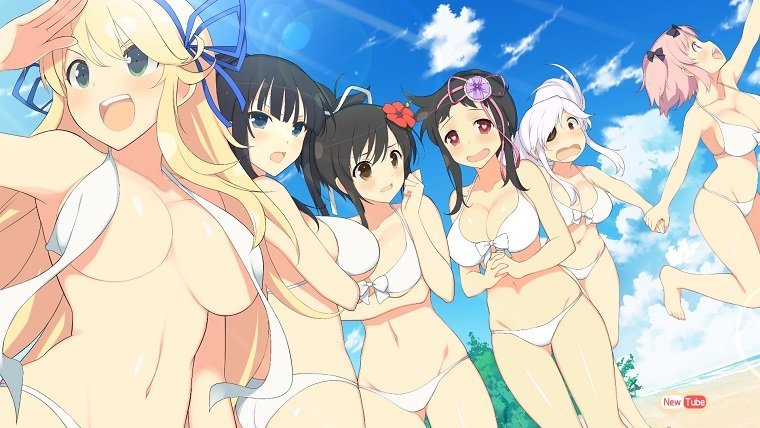 Senran Kagura has been around for several years now, releasing various titles for the Nintendo 3DS, PlayStation Vita and, most recently, the PlayStation 4. Outside of one, which is an entirely different genre, they’re all brawlers through-and-through, offering gameplay reminiscent of Double Dragon, Streets of Rage and Fighting Force. And now, as part of the series’ 5th Anniversary, the series is deviating from that gameplay once more with Senran Kagura: Peach Beach Splash.

Senran Kagura: Peach Beach Splash’s story lends itself perfectly to the franchise’s perverted humor, having all the notable shinobi from throughout the series (including some newcomers) participate in a tournament called Peach Beach Splash where they swap their weapons and Ninja Arts for water guns. Questions will arise throughout, such as who’s behind the tournament and why everyone is being forced to participate, but they all play second fiddle to the fanservice which is offered in copious amounts.

The easiest way to describe Senran Kagura: Peach Beach Splash would be Splatoon with Senran Kagura characters. In my case, this meant PBS was already fighting an uphill battle right from the get-go. I love the gameplay offered in the SK series and I’m not particularly fond of Splatoon, so the thought of a series I like being bastardized by incorporating features from one that I don’t really care for left me a bit skeptical about how well SK would lend itself towards such a genre.

This skepticism turned out to be warranted, though not to the degree I had expected. Being different doesn’t equate to being bad, and while the unique experience is definitely enjoyable, there is no denying that Senran Kagura: Peach Beach Splash offers a fundamentally different experience that will definitely be a turn off for the inflexible.

To start, a character’s strength and abilities are no longer dictated by their level or style they’re currently using. Instead, these are now dependent on your deck which is comprised of cards that need to be set before the start of every battle. 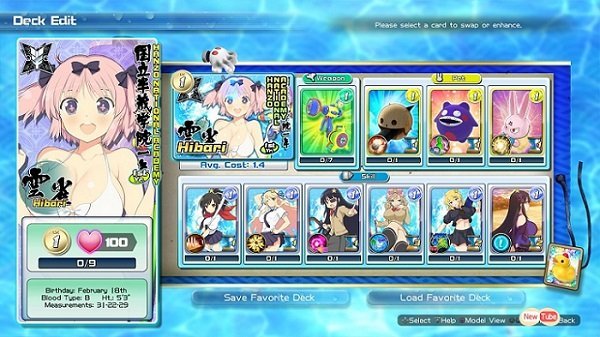 These come in three types — Weapon, Pet and Skill — and in five different rarities — N, R, SR, SSR, and UR. Weapons are straightforward, merely dictating which one you’ll have equipped when the fight starts. Pets and Skills, on the other hand, are far more diverse. Pets follow you around for a short period of time while performing various actions such as shooting at enemies or healing you, while Skills (which are the closest things to Ninja Arts in PBS) can do anything from summoning cyclones to creating reflective barriers.

You’ll only have a few cards at the start, but you’ll soon be swimming in them once you obtain more card packs by completing missions or buying them from the store. More often than not, you’ll be getting duplicates, but these will be used to enhance other cards and there are 810 of them in total, so expect to be collecting card packs for awhile. 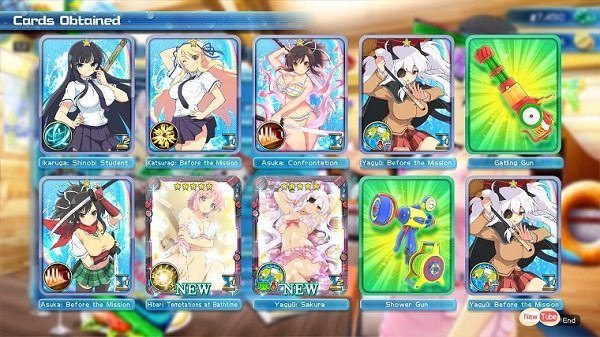 Once you settle on your loadout and start a mission, you’ll immediately notice your character using a water-based weapon instead of what they’d usually have in a previous entry.

There are 10 weapons in total, ranging from assault rifles to grenade launchers, each with their own set of stats. For example a gatling gun can deal high damage but has slow startup and an even slower reload time, while assault rifles deal low, but rapid damage and can reload quickly. What’s more, they also have an impact on a character’s movement abilities. Characters with pistols have quick, low-altitude jumps, while those with Gatling Guns can reach high-altitudes with their jumps but do so slowly. In addition, there are a few adjustments you can make to each weapon on the fly, such as changing its firing mode, which will have an impact on its damage and ammo usage, and turning off auto-aim, which will help when using certain weapons with odd firing trajectories. 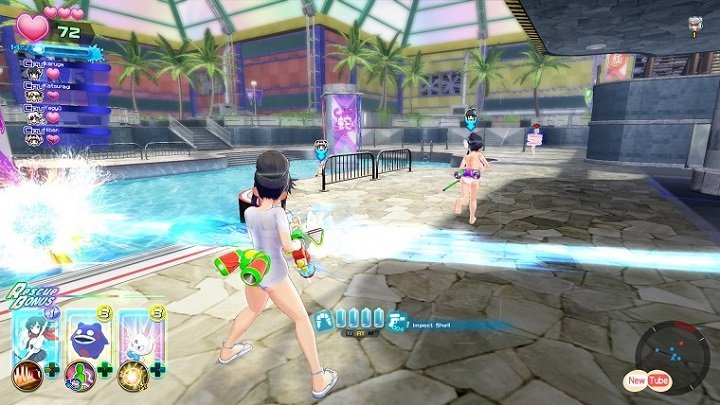 Interestingly, many of the character’s default weapons match their original fighting style to a degree. Speed-based characters like Asuka and Hikage typically use lighter weapons like pistols or dual pistols, while heavy-hitting characters like Katsuragi, Yomi and Homura use heavier weapons like gatling guns and rocket launchers. Ultimately, any girl can equip any weapon, and that leads to the one thing I couldn’t get over: diversity. Up until Peach Beach Splash, Senran Kagura had done well at making its cast as diverse as possible, with each member having their own unique fighting style. Now, thanks to every character being able to use every weapon in the exact same way as everyone else, there is nothing that distinguishes them except for their appearance (which is easily changed), voice and the odd-used melee strike. I understand why it was designed this way, but it would have been nice to see something that might make a sniper rifle more effective in Ikaruga’s hands than in Hibari’s.

Lastly, just like how Ninja Arts have been replaced by Skill cards, Secret Ninja Arts have been replaced by a new feature called Soaking Wet Mode. As you take damage from opponents (or get sprayed by allies), a meter just below your health gauge called the Soak Gauge will slowly rise until it completely fills. Once at max, you enter a state called Soaking Wet Mode which grants infinite water, allowing for unlimited ammo and jet dashes/jumps. That said, while you can easily lay the pain on anyone who’s foolish enough to engage you in a straight-up firefight, you aren’t invincible and can easily be defeated if someone gets the jump on you or if you’re attacked by multiple opponents.

Once gameplay is no longer a consideration, Peach Beach Splash’s content does become considerably more traditional. 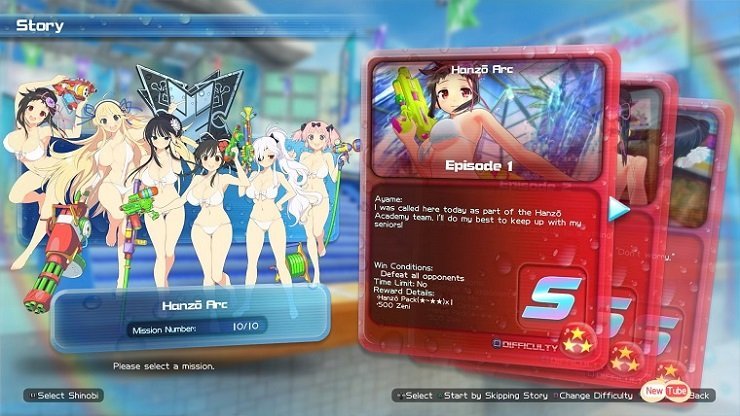 The meat of Senran Kagura: Peach Beach Splash is located in the single-player mode, Single Splash, which offers three unique modes to take part in. The main story is the same as always, having each faction split up and complete 10 missions in order to figure out the secrets behind the “Peach Beach Splash” tournament. Next are Paradise Episodes, which are the equivalent of Estival Versus’ Shinobi Girls Heart, having various characters go on a sidequest of sorts to offer a glimpse of their daily life or relationship with other characters from different schools. Lastly, there’s V Road Victory Cup which has you go up against teams of various shinobi to see who can get more K.O.’s before time expires. This doesn’t offer much in terms of story or context, but it’s a prime way to accrue large sums of cards and money.

Between the three modes, the ability to adjust their difficulty for better rewards, as well as the multi-player mode, Multi Splash, there is an abundance of content to keep you busy.

One important thing to note for all these modes is that you are almost never alone in any of them. For the first time in the series, the majority of your missions will be taken on as a team of up to five. This might seem like a blessing at first, but things start to fall apart once you start fighting other shinobi. The AI is simply unable to match enemy shinobi with raw skills alone, forcing you to give them the appropriate cards beforehand. In fact, it feels hard to match them yourself sometimes because of their ability to masterfully move around the multilevel arenas and the minimap’s inability to reveal which floor they’re on or distinguish them from regular enemies.

The Hanzō girls in particular will be a victim of this in their story because they have a new teammate in their ranks: Ayame, the shopkeeper. She’s on the verge of becoming a mainstay now and that means she’ll often replace one of the other five in certain missions. As such, so long as you keep everyone with their default weapon, you’ll need to keep track of which girl is missing and adjust your strategy appropriately. 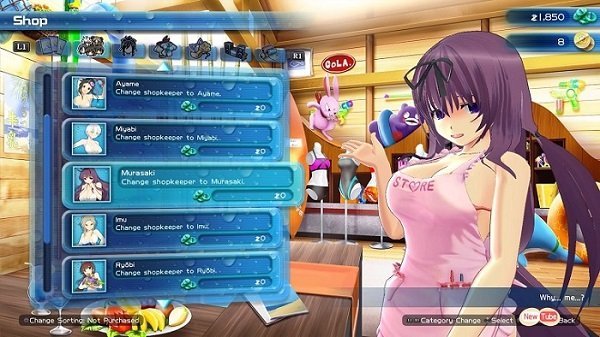 While on the subject of Ayame, due to her increased activity on the field, the shop has one new feature: the ability to change the shopkeeper. If you ever wanted to see what characters like Hikage, Ryōbi, Murasaki or Murakumo are like behind the register, than here’s your chance. Beyond that, however, the shop is the same as always, offering everything from outfits and hair styles to videos and music tracks. Unfortunately, you still don’t have the ability to preview these before purchase.

Fortunately, Senran Kagura’s most notable feature, fanservice, is present in Peach Beach Splash and it’s there in spades. This game has a beach theme just like in Estival Versus, but all the girls are in swimsuits by default. What’s more, instead of using a Secret Ninja Art to rip off an opponent’s article of clothing, you can do a special mini-game, called Squirmy Finish, where you stand over a defeated opponent and douse them with water until one of their clothes fall off. The only shortcoming in all this is that you can only strip one article of clothing before the mini-game ends. 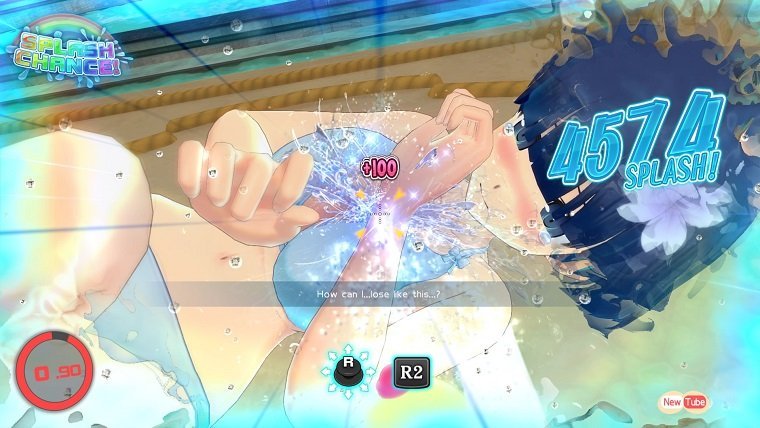 And, of course, there’s the Dressing Room, which is largely the same as its previous incarnation in Estival Versus. You can dress the characters up however you like and then take a photo of up to five of them in the Diorama area, or you can spend some alone time with your favorite girl and raise her affection until she’s willing to hold your hands and ultimately kiss you.

In the end, I do admit finding myself having more fun than I expected with Senran Kagura: Peach Beach Splash. Even with its occasionally flawed gameplay, it was still simple enough for me to overlook it. In addition, what it lacks in traditional gameplay, it more than makes up for in fanservice.

That said, how much you’ll enjoy this game will largely depend on what aspects of the series are most important to you. If you place the usual gameplay above all else, then you can easily give this game a pass and not feel like you missed much. However, if you’re a fan of the franchise’s characters and its fanservice, then Senran Kagura: Peach Beach Splash will not disappoint.