Shadow of the Beast Review

The latest news in the world of video games at Attack of the Fanboy
May 16th, 2016 by Kyle Hanson 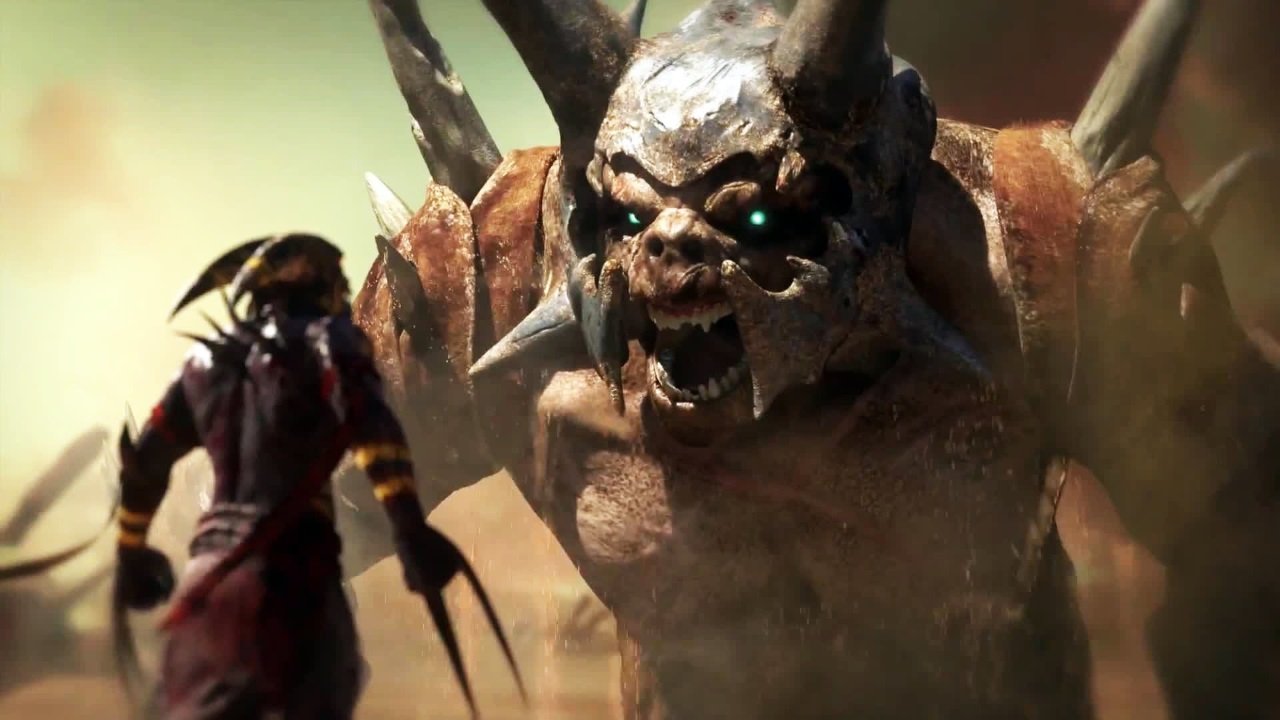 Remakes have become synonymous with this generation of consoles. For multiple reasons, we’ve seen a glut of remakes, though few have gone as far back as Shadow of the Beast. This PS4 game takes its inspiration from the 1989 classic, which was released originally for the Commodore Amiga, eventually making its way to the Sega Genesis. However, while Shadow of the Beast certainly takes inspiration from that original platformer, it has been reworked in massive ways to make it more palatable to modern audiences. Overall the game works in some areas, offering a fast, brutal 2D action-platformer for the PS4, but multiple design choices really disappoint, and take a lot away from the fun.

Shadow of the Beast tells a very fantastical story, though it does so in subtle ways. You play as Aarbron, a monstrous beast who serves the evil lord Maletoth. On a mission to retrieve a human baby you break free from your master, and for reasons that will become clear as you progress through the game, you turn against him. This sets you off on a quest across the land of Karamoon, where you will encounter various enemies and grotesque monstrosities. 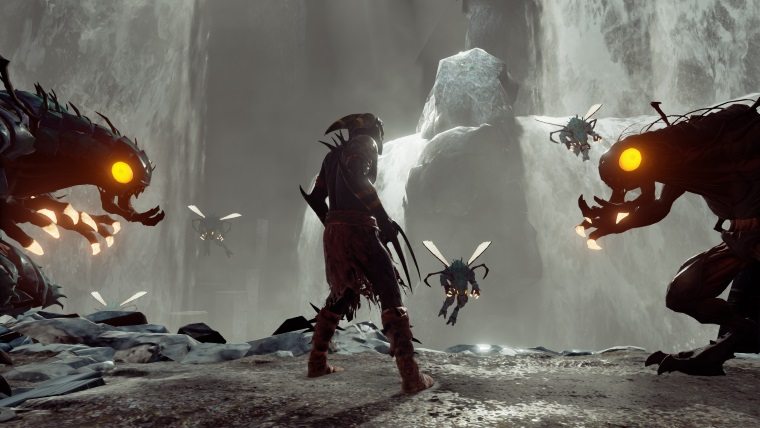 There is a whole lot more to the story, but unfortunately it is locked away behind collectibles. Throughout the game, you can find orbs that can only be broken with a very limited special move. If you still have one, you can break it, and unlock a video that fleshes out the backstory, and even the events portrayed in the game itself. While making a more subtle storytelling experience can work well, it feels superfluous here. Many of these videos, or the information contained in them, should have been scattered around throughout your quest.

On this quest you will adventure through 3D landscapes on a 2D plane, giving players a very classically styled adventure, with more contemporary visuals and design. And those visuals are truly striking. The backdrops are continually impressive, while the character designs really flesh out the world. Even focused in, when the camera zooms closer for a cutscene, the graphics are still very nice and polished.

It’s the gameplay that is a bit of a conundrum though. Shadow of the Beast is very much an unfortunate mixture of paradoxes. The game is both fast and brutal, while also feeling sluggish and frustrating. Combat is the main source of this frustration, while also being the provider of most of the game’s funnest moments. It’s a very odd feeling, and takes what would have been a very good game, and leaves players with a muddled experience all around.

Combat, for the most part, takes place in stages. As you progress through a level you might fight one or two random enemies, but the main components are split up into sections that are scattered throughout the stage. These sections will freeze your progress, setting up walls in front and behind you. Enemies will then spawn here, attacking you from both angles. You have a few options, but really there is just one main attack button, with some modifications for the more complex enemies. This results in a whole lot of button mashing, and with enemies dying from a single regular hit, it can get quite tiresome. 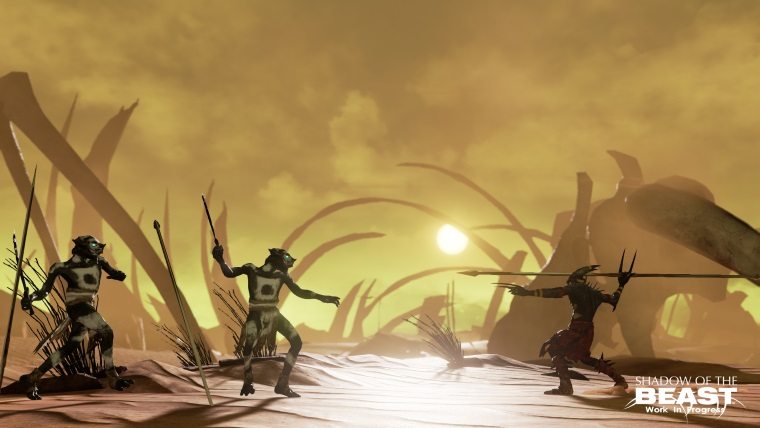 The action unfolding on screen is engaging, with blood and body parts flying around the landscape, covering the floor in red, but the actual mechanics of it are pretty dull for the most part. You really just pick a direction and mash square, if the enemy is nearby you’ll kill them, otherwise you will miss. Later on enemies take on more complexity, with shields that you have to move past, and some soldiers who have to be stunned before you can kill them. Sadly though, these really just cause more annoyance, rather than a feeling of tactical dominance.

Compounding this are the sluggish movement controls. With enemies attacking on both sides, you need to be quick about which way you are facing, but Shadow of the Beast slows you down here. Many times I’ll be hitting the person in front of me, have someone ready to attack me from behind, only to have to let that attack hit because turning around and blocking takes too long.

Thankfully there is more to combat than just mashing square though, with special moves that actually do enhance the experience. You can gain additional health by latching onto nearby enemies and draining their life force, or, if your “blood meter” is high enough, you can go into a rage and kill multiple enemies with a simple button tap. These help with the boredom that sets in for the longer fights, and some strategy does factor in when you use all of your moves, but overall the combat is just too frustrating to sustain the entire experience.

If the platforming were more enjoyable it could assuage many of these problems, but overall it’s just not that entertaining. Aarbron can climb walls, but really this just allows for differently designed levels, as his jump isn’t really long enough for this to feel like a true platformer. The areas that are devoted to platforming end up feeling more like a chore since getting through them isn’t satisfying on its own, and some special areas, such as a pitch black section with multiple death traps, are truly frustrating to the point that many might just drop the game, rather than continue through it. 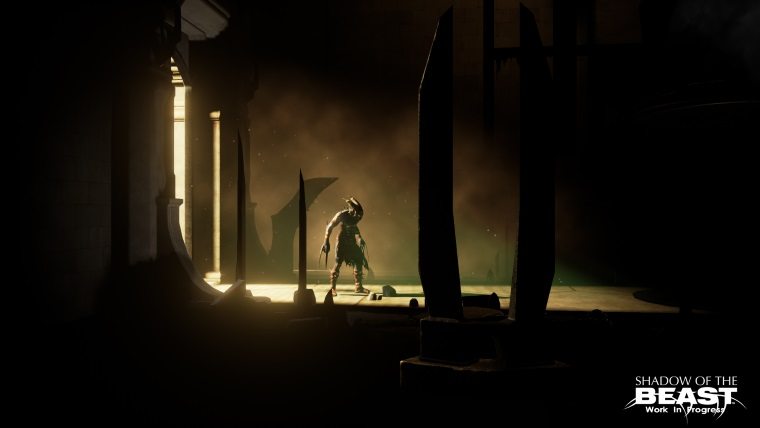 Shadow of the Beast offers a lot of things outside of the core gameplay that seem to be trying to retain players’ attention. There are multiple scoring systems, with each level containing different sections that you can try to outdo yourself or others. This just feels a bit tacked on though, and its doubtful that many players will become so enamored with the game as to come back to it over and over again.

There are also some Dark Souls-esque social aspects. While players can’t directly interact, you can “discover the soul” of your friend and choose to release them or challenge them to combat. You don’t fight directly though, and the whole system just seems very odd. It could become a favorite for those who enjoy asynchronous experiences, but the social aspects fell flat throughout my time with the game.

Shadow of the Beast is a competent action platformer, though its multiple parts don’t come together to form a very cohesive whole. Many of those parts are frustrating or overall unenjoyable. The combat is appropriately brutal, and those seeking a bloody affair will find something to love here. However, it doesn’t have the tightly controlled feeling of other action greats, and the experience is worse for it. Some sections of the game also feel tacked on for little reason, with major story pieces locked away behind hidden unlockables. Still, if you do delve deeply into the game, there are many things to enjoy, and you’ll have some great visuals along the way.

PS4 Shadow Of The Beast
"meh"

Shadow of the Beast