The latest news in the world of video games at Attack of the Fanboy
October 13th, 2016 by William Schwartz 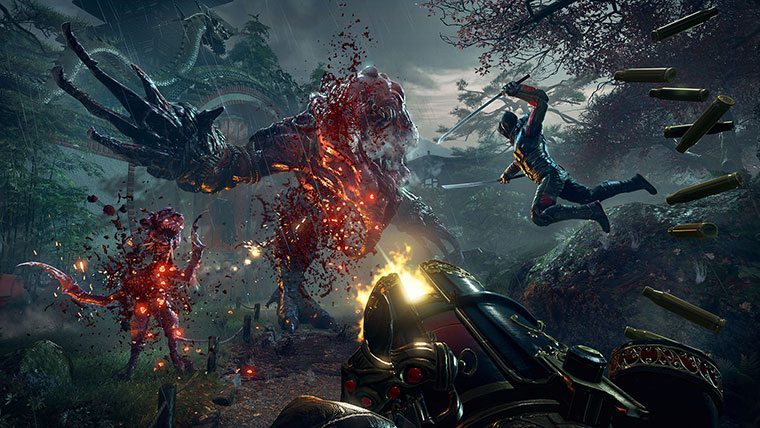 When Flying Wild Hog teamed up with Devolver Digital to reboot Shadow Warrior which released in 2013, it surprised a gaming community that probably wasn’t expecting much from the shooter.  A throwback to classic first person shooters, the Shadow Warrior reboot saw tons of praise from fans and critics alike for the ability to add new ideas to a timeless formula.  Combining sword based combat and gunplay with a lengthy, humourous, and mostly enjoyable campaign, it was a successful release for the developers.  With the impending release of Shadow Warrior 2, it’s time to take a look at whether Flying Wild Hog manages to capture the same magic that they did back then, with this highly anticipated follow-up.

For the most part, they do.  Flying Wild Hog doesn’t have the element of surprise working for them this time around though.  It’s either please those who enjoyed the last game, or not.  They’ve tweaked a lot of things in this sequel.  They’ve dialed back the length of the campaign a bit, adding plenty in its place.  All the while, focusing on the same kind of gory first person combat the original game thrived on.  While Shadow Warrior was a fairly linear experience, Shadow Warrior 2 is more open in that regard.  Players control the often offensive protagonist, Lo Wang, who goes on a journey to track down the daughter of a Yakuza boss.  After the girl’s spirit is separated from her physical body, Lo Wang and familiar characters that he meets along the way must find a way to reuite the girl with her body and in turn save the world.  It’s a story that’s full of crude humor and sarcastic remarks by Lo Wang, a similar formula to what we’ve seen from the game in the past.

This main path of the story is linear.  There are very few choices for the player to make, but where it does allow for choice is in character customization in the form of weapon upgrades, ability upgrades, and the like.  While this story is linear, there are options for both side missions and free roam mode of areas where missions have been completed.  This extracurricular activity allows the player to discover items to upgrade Wang’s weapon and power-up cache.  In game, new movement mechanics have also been added to Lo Wang’s arsenal. He can now double jump and dash around the map allowing for greater exploration. Because of this maps and missions have a very sandbox feel to them. Samurai Warrior 2 is not quite open world, but gives the player an ample amount of freedom in navigating objectives and looking for loot.  A bevy of weapons can be discovered and earned, each of which can be outfitted with gems to bolster their power, giving them elemental properties and stat boosts.  Those are the biggest gameplay changes.  Instead of a linear system of progression, Shadow Warrior 2 allows you to progress and build out your character any way you choose, or in ways that are best appropriate in tackling the demonic onslaught that lies ahead.

In a lot of ways, Shadow Warrior 2 feels like Flying Wild Hog’s vision of a Borderlands or Diablo style game.  Offering plenty of loot, weapons, and character customization.  As a game it all makes sense, and it’s a lot of fun.  Killing enemies whether on side missions or story missions, you’ll be constantly discovering collectible gems of all sorts that can alter your weapons, making them more powerful — The biggest baddies sometimes dropping rare weapons for you to equip and modify to your liking.  Over 70 different weapons that range from guns, blades, and projectiles will be discovered during your time with Shadow Warrior 2 and they all have distinct characteristics that are fun to experiment with.  The changes that have been made to the game in terms of looting and crafting feel a lot like the popular aforementioned titles. 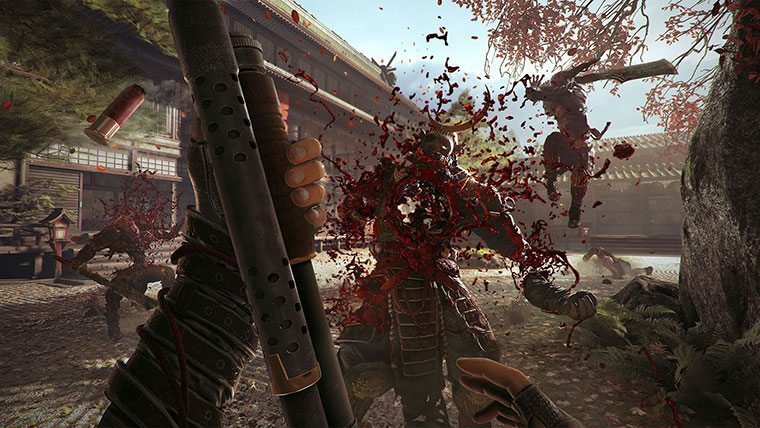 Combat in Shadow Warrior 2 still feels awesome.  There are tons of different enemy types, some common, some legendary, and they’re almost all susceptable to different types of elemental or physical damage.  Some are susceptible to electricity attacks, while others might be more prone to be being injured by physical melee attacks.  It’s a system that keeps you on your toes, and makes sure that you’re using the right weapon types for every big fight.  Fights themselves are hectic, with a new procedural damage system that allows you to see physical damage on enemies as you fight them, allowing for some gruesome scenes in the game.  Furthermore, finishing enemies off with weapons like swords or a chainsaw have spectacularly bloody dismemberments.  Exploring the world of Shadow Warrior 2 you can’t help but notice it’s ties to old school shooters.   You need to manage things like health and magic through enemy drops.  You’ll be picking up cash and items, and earning power-up points for your character all the while.  It’s a mix of old and new.  Depending on your difficulty preferences, Shadow Warrior 2 can be incredibly easy and dumbed down, or incredibly difficult.  Our playthrough on the “I Have no Fear” setting, the game felt a little on the easy side, with almost no penalties for dying.  Testing it’s other difficulty levels “Who Wants Wang” and “No Pain No Gain” were considerably more challenging.  With the latter seeing all enemies get their HP restored upon dying, with the tradeoff being better loot for Lo Wang.

While the game does feature a hub world that you’ll be revisiting quite often, it is still a mostly linear experience.  Players must seek out side missions or unexplored areas in previous missions as they are entirely optional.  However, progressing through certain story missions will offer prompts that let you know it’s your last chance to play a specific side mission or return to a previous locale in the overworld map.  Our playthrough on the medium tier difficulty took around 10 hours, with only one or two side missions done in the process.  In retrospect, doing more of them might have been a lot of fun, considering the potential rewards that might have been tucked away by doing a little more exploration.  The good news is that a new game plus mode allows you to retain all your weapons and power-ups and try it all again, or head back into the world and free roam to your heart’s content.  If you like the combat in Shadow Warrior 2, there’s plenty of opportunity for replay value.  With a multiplayer component added to this game, you can play with others on Steam or GOG, taking on demonic hordes as a group of up to four players. 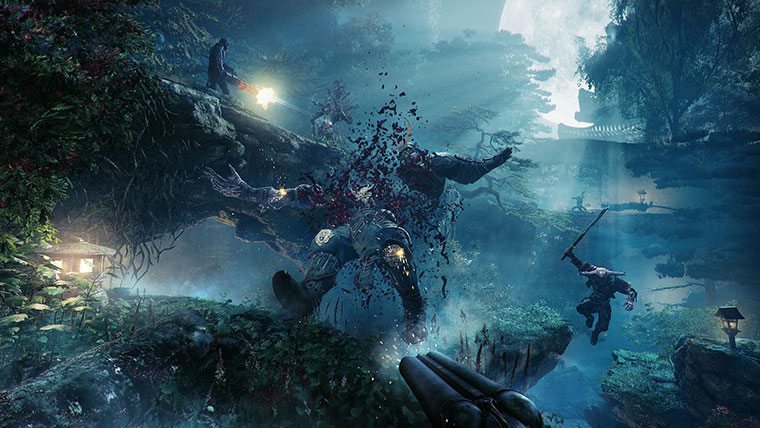 Presentation for the game looked great, with plenty of variety in terms of locales you visit and the enemy inhabitants within.  Our GTX 1080 ran the game well in 4K, and even smoother at 1080p.  Flying Wild Hog certainly had the PC community in mind, once again, with Shadow Warrior 2.  Just about every wishlist option you could ask for can be tweaked under the hood.  However, those with underpowered cards might see mixed results as fights can be pretty hectic towards the latter part of the game.  There’s not too much to complain about here with Shadow Warrior 2.  Aside from the shorter run time, this is more Shadow Warrior with some added loot and customization options for the player to flesh out the game in other ways.  Just how much you appreciate that trade-off depends on how much you like tinkering with all of the power-ups you’ll find in the game.  It can be a bit overwhelming in this regard.  Just about every encounter will drop some kind of gem power-up for you to experiment with.  Offering greater rewards as you progress through the game, there’s a lot of thinking about and tweaking your set-up.  Which weapons/guns you want to have quick access to, and which ones do which type of damage is something you’ll need to be very mindful of as enemies have a seemingly random set of strengths and weakness each time you face new groups.

Shadow Warrior 2 is a worthy successor to the 2013 reboot.  Flying Wild Hog obviously put more work into some of the gameplay systems for the game, while keeping the original’s great combat system and charm.  If you’re up for some bloody fast-paced first person combat, this ultimate power trip won’t disappoint.