The latest news in the world of video games at Attack of the Fanboy
October 13th, 2014 by Dean James 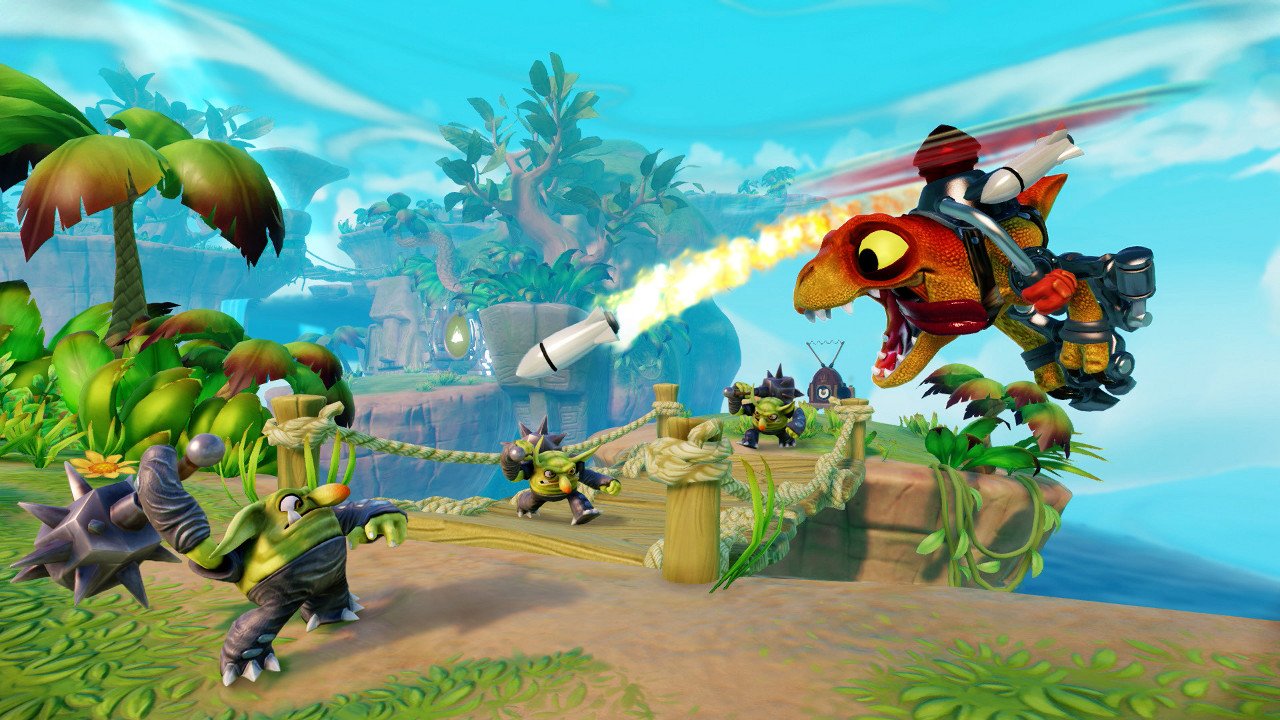 Collecting has played a major part in society for generations, from stamp collecting to pogs. Skylanders mastered the art of collecting on the gaming side three years ago, by not only providing a solid video game, but also an abundance of figures to collect that can be used in the game. After much success, Activision has now released the fourth entry in the series, Skylanders: Trap Team, which still aims to capture the hearts of kids and adults alike.

The Skylanders franchise started small and has grown in grandeur with each new entry. Skylanders: Trap Team continues this trend with a bevy of new features, the largest of which is the trapping mechanic that is hinted at in the game’s title. Unlike most games where you simply insert a disc into your console and go, the Skylanders series has always had much more to it. One of the most memorable parts is obviously the physical aspect, including the Traptanium Portal itself and the figures used with it. The one included with Skylanders: Trap Team looks similar to those in the past, but adds an area to insert the trapping crystals. This means there is one more thing you need to purchase to fully experience the game.

Just like Disney Infinity, Skylanders is kind of a double-edged sword for gamers. The games continue to grow and add new features for us to enjoy, however this means there is more we must spend on top of the game to enjoy it to its fullest. Luckily, you can play through the full game with just what comes included in the Starter Pack itself. This means that it is all a personal choice of how much you want to spend outside of that, though you will be incredibly tempted to buy more.

The platformer genre has been sorely lacking in recent years, especially of the 3D variety. Mario may still be king of the hill, but I am glad that games like Skylanders continue to bring back that old-school 3D platformer feeling we hardly see anymore. Disney Infinity: Marvel Super Heroes had some of this, but was built around a more open-world concept. However, Skylanders: Trap Team feels even more like the 3D platformers of the late 1990s and early 2000s, with the levels being split up in different locations across a number of chapters. 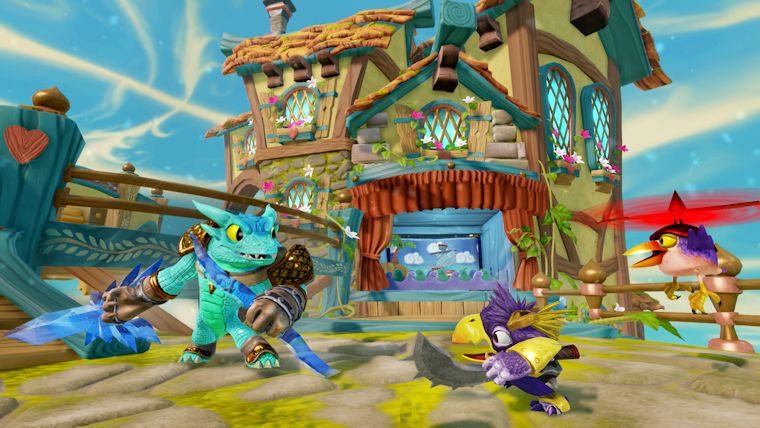 Skylanders: Trap Team features very simple level design, which makes the game feel a little too easy. This is one of the many indicators that the game is mostly targeted toward kids, but that certainly doesn’t mean that all ages cannot enjoy it. There is little chance you will get lost in any given level, as most are pretty straightforward. The good news for the older gamers is that the levels feature an abundance of secret areas, which add a lot more depth to them than you might expect.

More of these secret areas are unlocked by purchasing additional figures. Certain areas will only be accessible by Trap Masters of specific elements, with the Starter Pack only coming with one Trap Master, Snap Shot. The included Food Fight is a basic Skylander, so you will only have access to the gates with Water on them until you buy more, which can get a little annoying at times. There are still plenty of secret locations to find without needing to purchase the extra figures though, so you will have reason to replay through stages if you missed something.

The level-up system found within Skylanders: Trap Team feels somewhat lacking, as it doesn’t offer much variety beyond simply raising your stats. There is no sort of skill tree, however you can purchase hats and trinkets to increase stats, which kind of made up for it. Overall, this was a game where a strong RPG style leveling up system may have felt superfluous to the platforming, so it never bothered me too much. 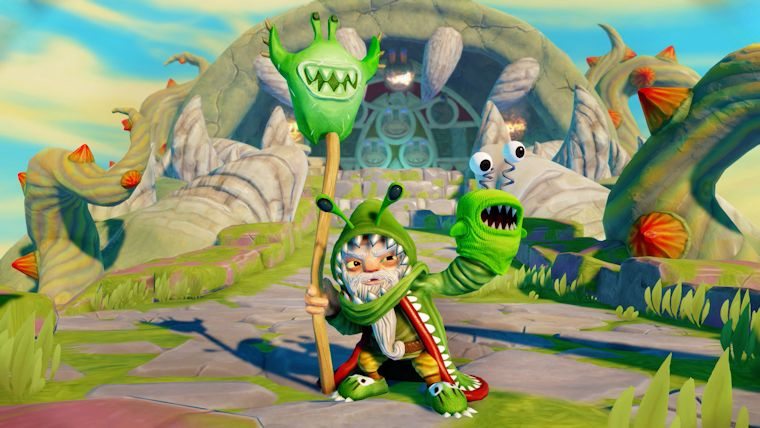 In the past, you were able to use a variety of Skylanders to play through the various chapters in the game. However, the new trapping aspect turns the game on its head, as it makes the game feel like Monster Hunter-lite. Each chapter in the game features a certain number of bosses you can fight, typically two or three of them. After being defeated, you have the opportunity to insert a trap crystal into the Traptanium base to capture said villain. Once trapped, you can use these villains at any time in battle by simply pressing a button, as long as you have the trap crystal inserted into the Traptanium. You are somewhat limited with just the Starter Pack however, as you can only trap Water and Life type villains. The best part is that once defeated, they are all transported to the Villain Vault at the Courtyard hub. By visiting here, you can easily switch out the villains within the crystals you own, or add previously defeated bosses to crystals you may purchase later, including those of types you couldn’t catch before. I was worried that I would have to go and defeat villains again once I bought the associated crystals, so this was a very nice surprise.

The Traptanium portal itself is very interactive, which is bound to be a big hit with kids. When you have a used trap crystal inserted, the villain trapped within will actually speak out fairly often through the base’s built-in speaker. This is a really neat feature that brings the Traptanium to life. As much fun as it is, you can silence this in the options menu if you start to get annoyed by it.

Besides the typical platforming gameplay, Skylanders: Trap Team also includes a few other fun and different mini-game segments. The first of those is Skystone Smash, which takes the tile matching game of the past and turns it into a full on card battle-like game. This can be a lot of fun and definitely shakes up the gameplay enough. Occasionally, you will also come across lock puzzles to get past certain gates, which are thought provoking enough without being overly difficult.

Skylanders: Trap Team actually utilizes a good bit of voice acting, which may be surprising to those new to the series. Thankfully, the voice cast is full of veteran voice actors that you will enjoy listening to throughout the game. My personal favorite was the always charming Patrick Warburton, but I was also extremely excited to hear Laura Bailey and Richard Horvitz. The game features its fair share of comedy, so having a cast of respectable voice actors with great comedic timing was very important. 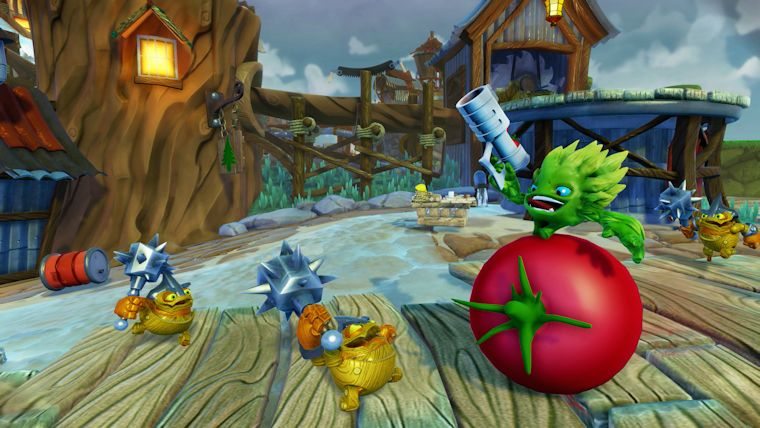 The story in Skylanders: Trap Team isn’t incredibly deep, but the villains are the ones that make it worth playing. The interactions between the various villains, specifically Kaos, will be very appealing to children, but still intriguing enough to adults. This is something that Disney and Pixar have perfected, and while the game is not quite up to that level, the excellent voice acting and solid enough comedy will keep you entertained regardless.

Skylanders: Trap Team elevates an already popular franchise to new heights by introducing one of the best features in the series thus far with the trapping mechanic. Not only are you able to square off against unique villains, but now you can trap them and use them in battle yourself. Trap Team also continues the trend of providing excellent 3D platforming action, which is quite unique in today’s current gaming environment. The game also provides new mini-games like Skystone Smash and the lock puzzles, which can get very addicting in no time. With a very impressive base game and the ability to expand upon it with the many available ancillary figures and traps, Skylanders: Trap Team is a tornado of fun that is bound to pull in kids and adults alike.