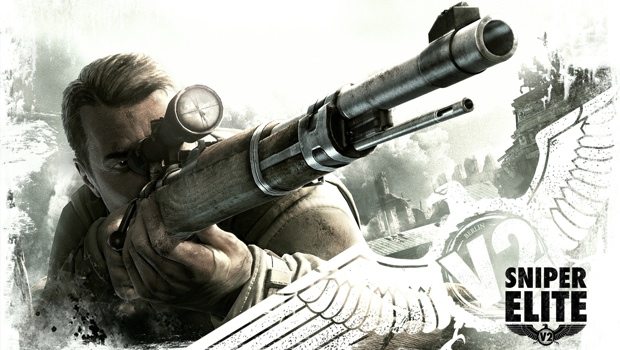 Sniper Elite V2 is a tactical third person shooter set in the Battle of Berlin, near the end of World War II. The player takes on the role of Karl Fairburne (nice name?), a lone OSS officer charged with hunting down and extracting information from the minds behind the V2 rocket program. Stuck somewhere in the middle of a battle between the Nazis and some conniving Soviets, the player must use stealth, strategy and extreme patience to bring the V2 rocket program to a grinding halt and save many innocents from a terrible fate. It’s unfortunate to see a game that supposedly chooses to avoid the likes of the cliche, over-the-top action shooters on the market today have such a lackluster story; but the level of skill it takes to land those perfect headshots at 200 meters gives this game a glimmer of hope.

The bullet ballistics in game are insanely tricky to master. The ability to spot enemies with binoculars makes hitting the poor little Nazi bastards a tiny bit easier, but once they hear your first shot they scurry about and run from cover to cover; becoming a sort of perverse version of Whack-a-Mole as you watch little green helmets bob up and down behind a retaining wall. Leaving a sense of relief after a bullet finally plunges through his heart as bones shatter, tissue tears open, and blood pours out of the exit wound. That’s not an exaggeration either, the “X-ray kill cams” offer a gory insight into just how destructive your shots are to the human body, which is somewhat satisfying in a sadistic sort of way. 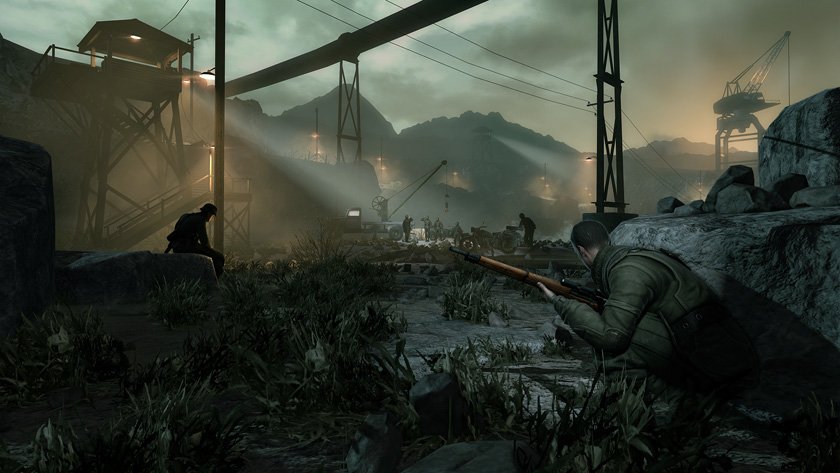 Aside from having your trusty sniper rifle of doom, you have a variety of trip mines, land mines, multiple types of grenades, and an infinite supply of rocks used to distract enemies. The mines can be useful to cover entry ways while you’re sniping from a two story window or plant on dead enemies so when one of their friends come to investigate…pure satisfaction. These kinds of plans don’t always turn out the way you hoped, but that could be partly the AI’s fault. These tools are helpful, but odds are you’re going to get into more shootouts than stealthy infiltrations and the unreliable stealth killing system pretty much seals the deal on that topic.

The enemies aren’t particularly interesting. Either they don’t do what they are supposed to or all they do is just run to cover and then pop their head out to get shot. At least they sometimes throw a grenade, that’s a plus. Even the idea of throwing rocks to distract enemies doesn’t live up to its true potential. Sometimes it works and enemies will go investigate, but other times it doesn’t phase them even if you throw the rock right at their feet and you are in their line of sight. What’s even funnier is when you do get that excellent kill via a land mine, for some reason your victim’s friends don’t seem to want to investigate the sound of a large explosion and a sharp scream from around the corner. It makes the stealth more interesting, but seems like a pretty major oversight.

Considering your level of ammo on everything but your sniper rifle stays pretty low at all times, it can make shootouts teeter on the the edge of failure a lot. That’s not necessarily a bad thing, it means you have to rely on conservation and skill more than whether or not you’ll find an ammo cache. Strangely enough, the amount of ammo you find throughout the game increases as you get closer to the end. This seems counterintuitive to the idea of the game getting harder as you go along, this game actually seems to get easier, but that’s a matter of perception. There are so many aspects to the game that make the player feel like they have to rely heavily on strategy all the time, yet the game has regenerating health and waypoints. Seriously, the game obviously is trying to separate itself from other shooters on the market, yet it adheres to two of the most cliche, hand-holding mechanics. Sure, it helps keep an even flow to the game, but we seem to have forgotten that waypoints are simply a lazy excuse to not pay attention to details in the level design that help guide the player through the environment while still letting them feel in control. That is a debate in of itself and shouldn’t be fought here, but some of these mechanics seem to contradict the overall feel of the game.

The argument about the lazy level design stands, however. Almost every single level seems to be ripped from virtually any and every single WWII shooter from the past ten years or so. There’s a mission about destroying a bridge, a mission involving trenches, cities where virtually every building has been leveled to the ground. You name it, Sniper Elite V2 probably did a version of it. Some of this is to be expected. Of course you’re going to see a variety of locations with heavily damaged buildings, it’s war-torn Europe during the final days of the war. Seeing as this game is loosely (very loosely) based on real locations and events, it’s almost impossible to avoid the typical WWII cliches. But can we try something a little different for once? Take a little creative freedom and throw a little variety our way. It’s not like the designers were relying so heavily on the game’s story anyway, might as well throw in some levels that are noticeably different from the rest. 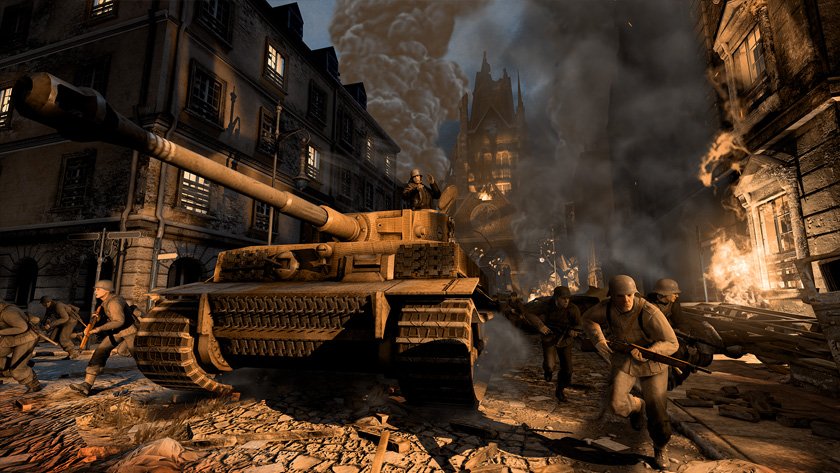 Speaking of the story, it doesn’t really have any true level of depth at all. Hunt down the evil scientists and German officers behind the V2 Rocket program, put a bullet between their eyes, and then stop the rockets from being fired. That’s pretty much it, despite one very small twist in the last third of the game, but it isn’t anything particularly shocking. If anything, it’s just not very believable, but I won’t spoil it. The fact that the main protagonist sounds like Duke Nukem’s less bulky yet considerably more mature stepbrother doesn’t help either. The acting is somewhat cheesy and predictable, but considering the script the actors had, you can give them the benefit of the doubt. At the end of each mission, you learn where you’re going next and why, but despite the fact you are on your own with no form of travel that’s explained in game, you inexplicably end up in heavily guarded enemy territory unharmed at the beginning of every mission, as if by magic. The game isn’t particularly long, if you suck at strategy and sniping and take your time a lot, you’ll still probably finish in under six hours. You’d think that the developer could have made a couple levels about how you got from point A to point B and in turn deepen the story a bit and brought the game to a more respectable length. Isn’t the story supposed to be more in the journey than the destination?

Sniper Elite V2 is full of flaws, overly predictable, and has one too many boring moments. The game feels like it lasts ten hours, but not at all in a good way. When you see that it actually only took about six hours, you might let out a sigh of relief in knowing that you didn’t blow as many hours on that game as you may have thought. All of that being said, it is still a relatively fun sniper simulation. It’s tricky, it’s complex, and all around leads to a fair amount of satisfaction when you succeed. There are a handful of moments that lead you to believe that if the rest of the game were more like that skirmish, it actually could pass as a fairly decent game. Because of that, I can’t say I hated the game in all good conscience. There are a couple parts that I wouldn’t mind playing again. Seeing as it’s only a couple of moments, I can’t call it a good game either. If you are a die hard sniper enthusiast, you might want to pick this up on sale or after the price drops. It’s unfortunate really, the game was a few hours and a couple of design adjustments away from being a bit of a relief in a pretty cluttered genre.