The latest news in the world of video games at Attack of the Fanboy
August 14th, 2017 by Jelani James 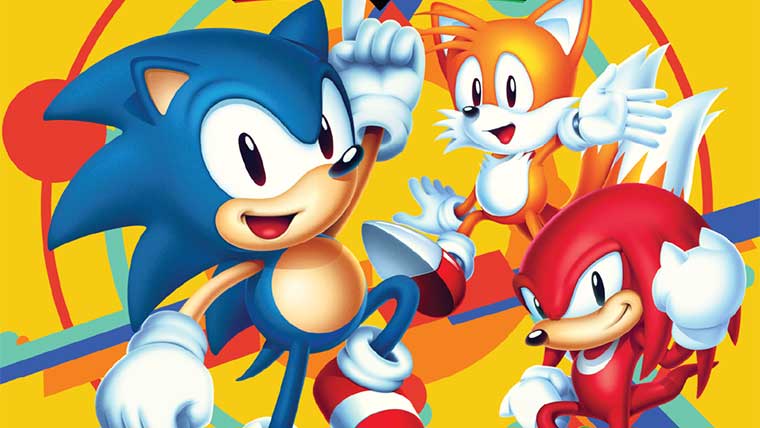 Sonic Mania is Sega’s latest attempt to recapture what made Sonic great in the late ’80s and early/mid ’90s. What makes things so different this time around, however, is that Sega isn’t doing this alone. Rather, Sonic Mania comes to us courtesy of Christian Whitehead, Headcannon and PagodaWest Games, who, rather than create a 3D title or make a 2.5D-style game like Sonic 4, opted to make a genuine 2D Sonic title which mirrors those seen on the Genesis/Mega Drive when the series was its best.

However, you might be in for some disappointment if you expect Sonic Mania to be Sonic The Hedgehog’s return to glory. That isn’t to say that the game isn’t fun, in fact it is easily the best Sonic title I’ve played since Sonic Generations in 2011. For me, however, the problem is that Sonic Mania (like Sonic Generations) is more of an amalgamation of older titles with a fresh plot than it is an entirely new one. Sonic Mania consists of mostly Sonic 2, 3 & Knuckles and CD content with a few new zones and bits thrown into the mix. 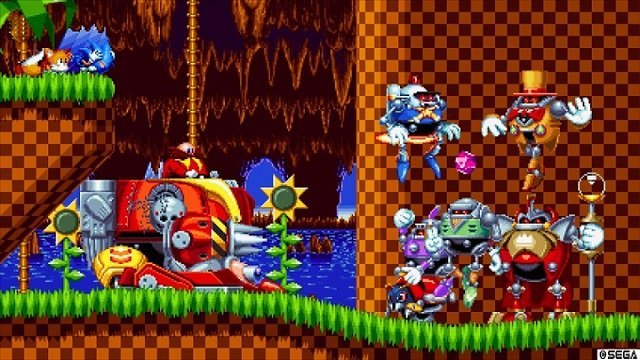 That said, my complaint is a relatively minor one. Yes, most of these zones are ones that long-time Sonic fans have played to death, but the developers were prudent enough to do just enough to each of those older zones, to make them feel like they weren’t simply recycled to be used as fluff. What’s more, each of those changes were successful (for the most part) and really helped to make each of the returning zones truly feel fresh. For example, the Chemical Plant Zone now feels like an actual chemical plant by featuring syringes that can be used to alter the properties of the various pools of water that players encounter throughout the zone. These properties range from hurting Sonic (or whoever you’re playing as) to allowing him to bounce so high that he reaches new parts of the level. Similarly, Stardust Speedway (based on it’s Past appearance) now has capsules that can be used to cause giant vines to grow throughout the immediate area. Once they’re fully grown, Sonic can use the leaves as platforms to climb to previously inaccessible parts of the zone.

Just as the zones have been adjusted, the boss encounters throughout them have been adjusted as well. Going back to the the Chemical Plant Zone, the Act 2 boss isn’t even a boss at all — it’s a mini-game. Upon reaching the end of the zone, instead of fighting the Water Eggman boss, Dr. Eggman will challenge you to a single round of Dr. Robotnick’s Mean Bean Machine, a falling block puzzle game from 1993. Meanwhile, though Metal Sonic is still the boss of Stardust Speedway, the overall encounter has been changed up in a big way. As those who’ve played CD might recall, Sonic had to race against Metal Sonic in order to clear the zone. However, since Amy hasn’t been kidnapped and there is no planet that needs to be saved from disaster, Sonic instead just has to hit Metal Sonic a few times which causes the encounter to transition from a race to a traditional boss fight where Metal Sonic takes control of a giant machine that can only be damaged by sending the robots that he creates back at him. 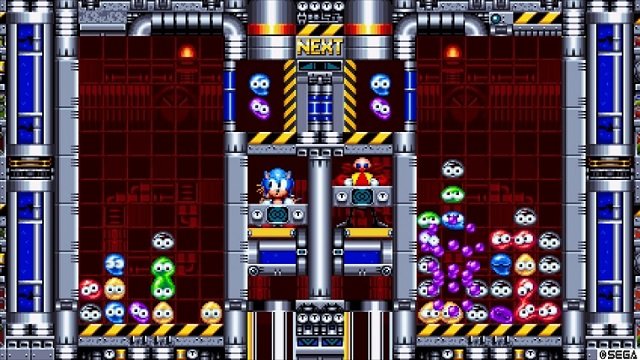 With everything that the developers did right with the returning zones, the only one I felt wasn’t as successful was the Hydrocity Zone. Not only did it lack the same level of refinement as the others, but the new mechanic (adjusting the water level) is neat, it feels more like it was something you had to use to progress, rather than something that could be used to access shortcuts or make the level easier. Similarly, the bosses were somewhat unintuitive and annoying at times. The Act 1 boss is actually a reversal of the original Act 2 boss: after a brief sequence where Sonic has to avoid being crushed by the environment, Sonic finds Dr. Eggman’s Waterspout & Depth Charge Machine and opts to use it against him as he swims in the water below. Considering that Dr. Eggman is leaving depth charges in the water, my immediate instinct was to create a whirlpool and cause the depth charges to explode on him, but I soon learned he is somehow immune to explosions. On the contrary, the only way to hurt Dr. Eggman is to trap him in the whirlpool and pull him into your propeller.

The second boss was better, as it was simply the Whirlpool Machine from the original Act 1, but it was preceded by an annoying underwater sequence in a horizontal corridor where Dr. Eggman is trying to crush Sonic using a submarine. The issue with this sequence is that it is essentially impossible to recover your rings if you get hit and there are no rings provided throughout the course of the encounter (unless I somehow missed them). What’s more, you still have to worry about drowning since the whole encounter is underwater and the only way to get more air is to damage Dr. Eggman’s machine by swimming into mines(?) which propel themselves backwards when Sonic touches them. Unfortunately, this won’t be an easy feat for those unaccustomed to 2D Sonic, as the bumpers can be inadvertently held back by Sonic’s body (which both prevents the bumper from moving and increases your chances of getting hit by the boss) and you also to have to worry about colliding with debris strewn about the passageway. Each of these aspects would be fine on their own, but they can make for an annoying experience when combined. 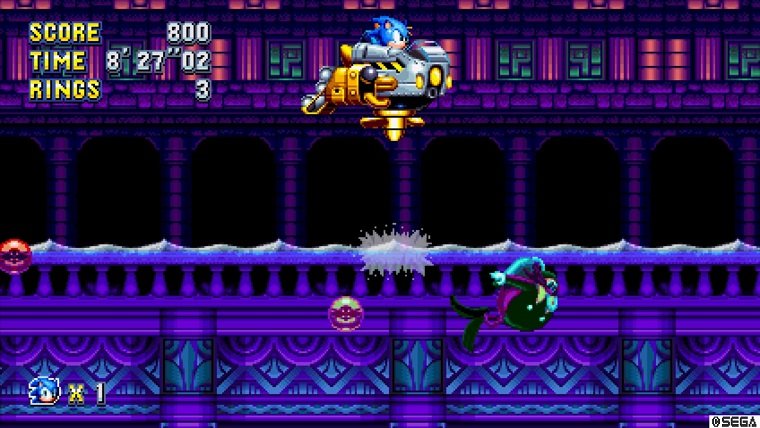 Some of the power-ups also got similar updates, such as the electric shield now having magnetic properties and the flame shield also being able to burn wooden objects. One interesting power-up is the Combine Ring, which hasn’t been seen since Knuckles’ Chaotix. With the power-up active, the player will now drop multiple large rings instead of one giant ring upon taking damage. As an upside to this, however, the rings don’t explode into multiple normal-sized rings if you take too long to pick them up. Though not technically a power-up, Sonic does gain access to a new move called Drop Dash, which allows him to instant breakout a full-speed dash the moment he hits the ground by holding the jump button while in the air.

Though if reimagined zones with new themes running at 60 FPS isn’t quite your speed, then perhaps the new zones will help see the game in a more positive light. It’s not everyday that fans of a series get to make a homage to their series of choice and have it actually be sanctioned by the original’s creators, and you can tell that the developers used the opportunity to go to town. Each new stage is visually and mechanically breathtaking and feels unique even when stacked up against other zones seen throughout the series. For example, the Studiopolis Zone features the glitz and glamour often seen with various casino zones, but manages to set itself apart by cleverly incorporating mechanics that are inspired by studio equipment, such as using a van to transform into a radio signal and travel around the zone via satellite dish. Similarly, the Mirage Saloon Zone maintains a distinct Wild West theme to it, whether you’re travelling around the desert via plane, infiltrating Dr. Robotnicks steam locomotive or actually running through a saloon. 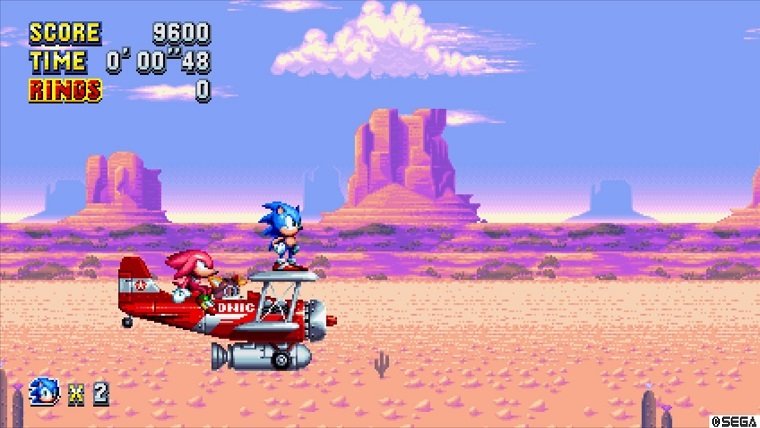 However, what is most enjoyable about each of the new stages is the amount of Easter Eggs found within them, serving as a visual representation of just how much love the developers have for SEGA and the Sonic The Hedgehog series. Going back to the Studiopolis Zone, there are various signs and televisions found throughout the zone whose display references various things related to Sega, such as Club Sega, the Sega Game Gear and Streets of Rage. Meanwhile, the very aesthetic of Mirage Saloon Zone is near identical to Desert Dazzle which supposed to appear in the 2011 re-release of Sonic CD, and the level itself has throwbacks to various Sonic characters, such as the eagle-like and Roller Badniks having the same color schemes as Wave the Swallow and Mighty the Armadillo, respectively. Most of all, there are various wanted posters for Fang the Sniper, Bark the Polar Bear, and Bean the Dynamite (from Sonic the Fighters and various other entries) strewn throughout Act 2 and the boss actually transforms into them throughout the encounter.

Lastly, it wouldn’t be a Sonic game without extra stages and Sonic Mania features two of them. The first, Blue Sphere, is reached when you jump into the star circles that appear above a checkpoint. It plays exactly the same as before where you must collect all the blue spheres in order to clear the stage. The only difference is that instead of a Chaos Emerald, you get a Silver Medallion if you get all the spheres and a Gold Medallion if you get all the spheres and rings. The second extra stage (which doesn’t really have a name at the moment), is the new way to get Chaos Emeralds. As is typical in the series, the stage is only accessible by entering giant rings hidden throughout each zone and upon reaching them, players will be tasked with chasing after a UFO on a square, pseudo-3D board. In order to accomplish this, players need to collect blue spheres which increase their speed and rings which gives them extra time to catch up to the UFO. Of course, catching the UFO isn’t as simple as collecting rings and spheres while running on a perfectly square path. As expected, the stages quickly become more complex as you get closer to collecting all seven Chaos Emeralds and there are plenty of spikes and pitfalls which can end your run early if you aren’t careful. 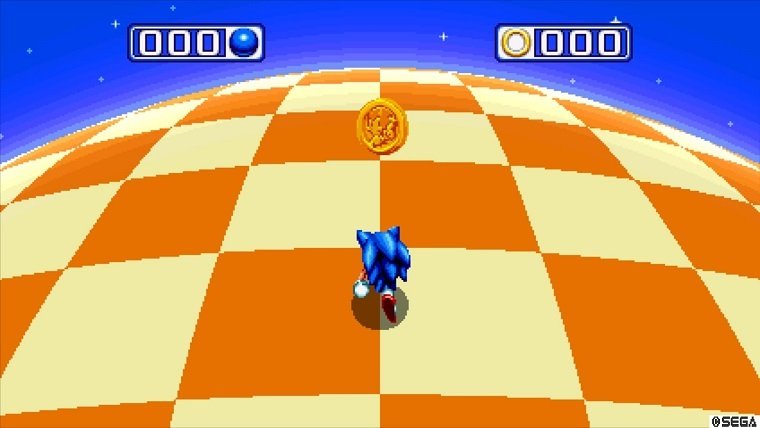 Sonic Mania doesn’t necessarily mark Sonic’s return to his glory days, but I’d be lying if I said this wasn’t the potential start of something beautiful. If anything, it feels like a gateway game that could serve as a foundation for the future of the series if the Sonic Team chooses to continue in this direction. This has been the most fun I’ve had with a Sonic game since Sonic Generations and it easily ranks with Sonic CD as my favorite 2D Sonic title, as well as one of my favorites of all-time. For me, the only thing that holds this game back is the fact that there aren’t more new zones. Yes, the old stages (even Hydrocity) did have a new feel to them, but that fact is mitigated somewhat since there were so many of them. Each of the new stages were amazing and it was frustrating to play through an entirely new zone knowing that I’d have to play through essentially 2 or 3 old ones before I would see another. That aside, there is no denying that Sonic Mania is utterly amazing and has actually left me looking forward to the future for the first time in years.