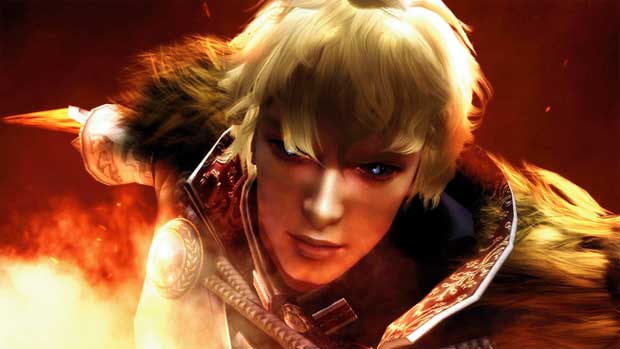 One of the most beloved fighters since the days of the Dreamcast, Soul Calibur has seen considerable changes over the years. Namco Bandai and Project Soul are getting set for another round with Soul Calibur V, but is it business as usual for Project Soul? The franchise which has resonated with the fighting community for years, for its tight combat system and blend of unique characters, has got its work cut out for it. With a brand new story to tell, new characters, and a solid foundation to build off of, it’s time to see if Soul Calibur V hits the same high marks as its predecessors.

In Soul Calibur V, seventeen years have passed since Siegfried defeated Nightmare. The story behind the Malfested, and the legendary Blades of Soul Calibur and Soul Edge, has progressed with it as well. Sophitia Alexandra’s son and daughter, Patroklos and Pyrrha are front and center in the single player campaign. Travelling down the path of the story, you’ll encounter the twists and turns that you’d expect from a Soul Calibur experience, but most of this is best experienced first hand, and we’ll try to avoid the spoilers from going too much into detail about the new characters that you’ll encounter along the way.

Play Dress Up –Though the single player campaign in Soul Calibur V is just window dressing for the all important multiplayer aspects of the game. This time around, Soul Calibur V is looking to hook players with an onslaught of customizable options, characters, and ways to interact with others online. One of the coolest new features in Soul Calibur V is the ability to customize your character in any way you see fit. From changing appearances, to fighting style, you can make just about anything you want within the constraints placed on you through the in-game character editor. You can then take this character into the online arena, and compete with others across the globe, where you’ll see some very interesting characters indeed. From easily recognizable superheroes recreated by their makers, to goofy figments of the imagination, play a few rounds online and you’re likely to encounter fighters that didn’t come standard with the game.

Watch this – Social fighting fans will also like the fact that out of the box, you’ll have the ability to play in a multitude of online environments. Social lobbies allow you to converse with other fighters, watch players do battle in real time, download videos of your own or other fighters, and initiate rivalries with the players that you encounter. The game offers players the choice between Player and Ranked matches to seperate those that are looking for serious competition or just a casual social bout. Whichever mode you gravitate to, your vital stats will be stored within your fighters license that other players can view to see your online accomplishments.

Going Offline – Stored in the “Astral Home”, all of these stats are easily accessible, and as a total package, it feels really well put together and extremely comprehensive. If you aren’t into the whole online fighting scene, you can also have a go at Soul Calibur V offline as well. With five different offline modes, Soul Calibur V offers an Arcade mode, Quick Battle Mode, VS mode, Legendary Souls Mode, and a training arena for you to hone your skills.

Lots to learn – The training mode will likely be necessary as the game has added a new fighting system to what feels like a pretty well preserved core experience. Brave Edge and Critical Edge replace Critical Finishes, and add a new layer of strategy throughout each battle. Each character has a selection of Brave Edge attacks that can be utilized at opportune moments, once the new Critical Gauge is filled. Very much like other current generation fighters, these Brave and Critical techniques offer cinematic attacks that deal considerable damage to their targets. Even for veterans of the Soul Calibur franchise, you could be in for a bit of a learning curve with the new functionalities in the game.

Return of the favorites – Fans of the franchise will easily recognize quite a few of the returning characters from previous games. Franchise mainstays like Voldo, Ivy, Nightmare and Siegfried among others make their return to the game, as well as quite a few new characters that’ll make their debut in V. Most notable are the siblings Alexandra who are used mostly throughout the single player campaign, but are also looking like crowd favorites in the early online play that we took part of.

Single player not very good –Unfortunately, the single player plays second fiddle to the extremely well done multiplayer. While the story is good, it’s engagement pales in comparison to the wealth of options in the multiplayer modes, and is saddled by cutscenes that are laborious at best. The core fighting is well done, and the developer does well to get the major points across to the player, but it does so with little flair for the dramatic. Only a handful of the twenty or so stages feature legitimate breaks in the action, with many only providing voiceover accompanied by stills. It’s a shame really because the graphics of Soul Calbur V and the levels that were created for each stage are intricate and imaginative. Personally I would have liked to see more from them in the single player portion of the game.

Enviromental destruction and armor destruction also return in Soul Calibur V, but again they are only small portions of the game. More emphasis, especially on the environmental hazards of the levels would have added immensely to an already great looking experience.

Casual vs Core – As with most fighting games these days, Soul Calibur V appears to have been designed with two audiences in mind. The first is one that doesn’t have the time or patience to learn the required controller inputs that initiate the best there is to see in the game. But for the hardcore fighter fan, there are plenty of layers to uncover as would be expected. Stringing moves into Brave Edge combos will take some practice and time, but are extremely effective in the arena. Advanced moves like slide inputs and other timing based combos will again take some getting used to. Not having the wherewithal to learn some of these tactics can definitely put a damper on the fun there is to be had in Soul Calibur V.

Soul Calibur V is a near pitch perfect blend of the qualities that prior entries in the series became famous for, and new features that all fighting games must have to compete. Whatever type of fighting game fan you are, casual or hardcore, Soul Calibur V has exactly what you are looking for, whether that be a new game to master or fun with friends.