Need For Speed: Most Wanted Review 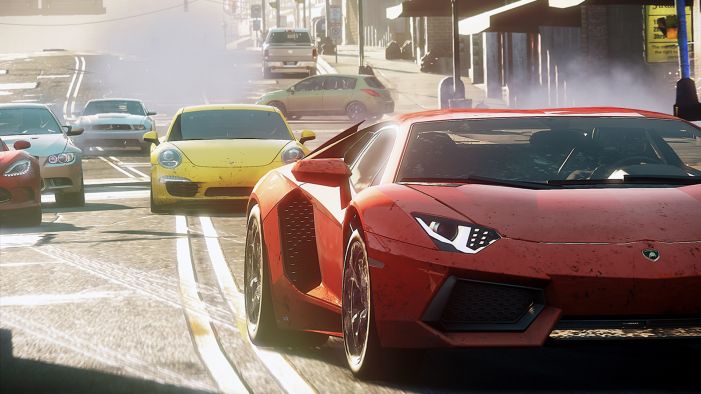 When you think of the Need for Speed franchise, it’s hard to pigeon hole the racing series into one particular type of racing game. This generation there’s been a cops and robbers affair, a cross-country rally race, a couple of racing simulators, and even a game titled the same as this one: Need For Speed: Most Wanted. As for the developer, Criterion Games is one of the best in the business, and has proven their racing acumen with the Burnout series for the better part of a decade. They also developed one of the best rated racing games this generation with Need For Speed: Hot Pursuit, which gave Sony’s Gran Turismo 5 a run for its money. In Need for Speed: Most Wanted, Criterion takes all the best parts of its Burnout franchise, some lessons learned in Hot Pursuit, and mashes them up into an open world arcade racer with plenty of white knuckle thrills.

Whether online or offline, the goal in this Need For Speed title is to become The Most Wanted driver. This is done by accumulating points, winning races, getting takedowns and evading the police, among a myriad of other challenges. Criterion adheres to this open world vision that was likely inspired by Burnout Paradise, giving players a loosely structured path to the top of the Most Wanted list.  Moving up one of the ten rungs on the Most Wanted ladder will require a specific amount of points. Once unlocked, you can cruise the open world to find your target, race them, hopefully beat them, and take their ride as well as their spot on the list.  Doing just about anything in your vehicle will earn you points, but you’ll earn the most by selecting vehicle specific challenges to accomplish. These range from straight races to speed runs, and number of different game modes in-between. There are a couple of wild cards however. One is the police, and the other is pedestrian drivers. 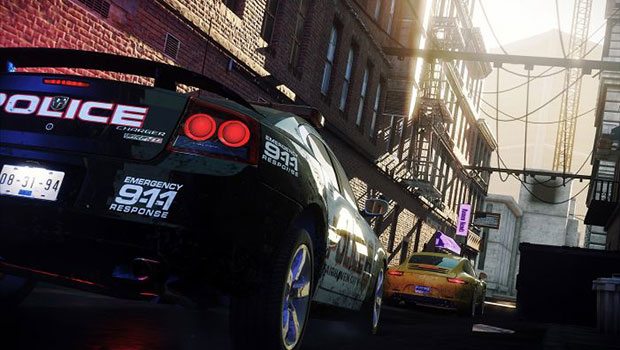 The world of Fairhaven is densely populated, and you are cruising around at a breakneck pace. It doesn’t take much to get the cops on your tail. Shaking them is no easy task, as they are stronger and faster than you. They’ll line up road blocks, put out spike strips, and team up to do whatever it takes to impede your progress. The longer you resist, and the more damage you do, the higher your threat level becomes. You’ll need to get creative at times, looking for any way to shake loose. This is limited only by your imagination and immediate surroundings, as well as any constraints that a specific event may have.  You can duck into a warehouse, zig and zag through tight corners, then launch your vehicle off of a four story building if its close enough. There are various environmental pieces you can use to accomplish your goals, which is ultimately losing the police while racking up points in the process. You can get extremely creative in your getaways and races, but Burnout faithful should still feel comfortable with a good old fashioned shunt takedown when either an opposing racer or the police get too close.

One interesting facet of Most Wanted that really differentiates it from other racers is the ability to drive any car at the beginning of the game. This “Find it and Drive it” mechanic opens up the game more quickly than other racers. 20 minutes into Most Wanted and you can be behind the wheel of one of the best vehicles in the game, given that you’ve discovered its location and switched cars. Once found, you can hop into any of these cars by accessing the game’s Easy Drive menu, which keeps track of car-specific challenges, autolog challenge recommendations, car customizations, the most wanted list and multiplayer features. Easy to access with the controller, but can also accessed via the Kinect on the Xbox 360, which means you don’t even have to stop driving to issue voice commands to the camera. Winning a car-specific race will earn you unlocks for that vehicle, these depend on the difficulty of the race and can range from Nitrous boosts, to re-inflating tires, among other perks that can be used to give you a leg up on the competition. You’ll need these perks when you go to take on even the lowly of the top ten, as these races are significantly more difficult than the standard fare. Featuring multiple paths, an unfriendly police escort, and a world full of Sunday drivers, you’ll need to use every trick in your book to stay ahead to the finish line.

Single player constantly reminds you of the online world. Record speeds, pursuit records, jump distances and billboards will show who the top dog is on your friends list. Though nothing takes the place of some good old fashioned heads up racing with friends, and that’s where this open world spills out into the online arena. There’s no multiplayer menus, no lobbies, and no waiting to get a race started. In Most Wanted, you simply jump into an open world session, and you’ll be mixing it up in a variety of different challenges in short order. The premise is the same as single player, centered around Speed Points, and earning them in similar fashions. Crashing rivals and beating them to the starting line of any given meet up spot will net you points that go towards your Speed Level. Winning races and challenges will score you even more points. Even going backwards after a race to hinder other players from finishing will score you points, in fact it’s encouraged. That’s just the type of racing game that Need For Speed : Most Wanted is.  Earn enough of these points and you’ll be able to unlock new cars, customize them, and then turn your new creations on your opponents as you claw your way to the top of the Most Wanted List. Unfortunately, Criterion didn’t include the police chases in the online component of Most Wanted. Where they greatly increase the intensity of the single player races, it’s safe to assume that they could’ve done something online  in the same fashion as Hot Pursuit. Unfortunately, they didn’t.  While its still a great online experience, you can’t help but think what it might have been.

Need for Speed: Most Wanted isn’t the prettiest racer to hit the market this month, nor is it the most realistic. What it is, is an extremely connected racing title that delivers the thrill of the high speed chase. Whether you’re in it for the single player and just looking to climb to the top of that local Most Wanted list, or have more global aspirations, Need For Speed Most Wanted has an equally entertaining arcade racing experience for you.

Need For Speed: Most Wanted