The latest news in the world of video games at Attack of the Fanboy
July 18th, 2017 by Kyle Hanson 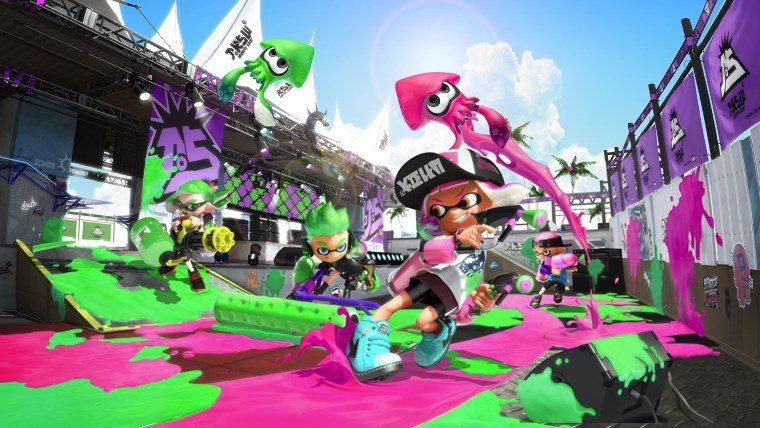 The Wii U may have not been a huge success, but it was home to some of the best games of last generation. One of these was Splatoon, which came out of nowhere to deliver a brand new Nintendo IP in a genre that they’d largely ignored for years. Taking shooter mechanics and reworking them in ways that only Nintendo could, the game was a hit, and Nintendo’s continued support showed that they were serious about this new franchise. Now, with the Switch surging around the world, Nintendo steps up again with Splatoon 2. This sequel might not change the whole formula like its predecessor did, but it does deliver another great shooter experience in Nintendo’s unique aquatic world.

Splatoon 2 brings back Nintendo’s distinctive shooter style for the Switch. Once again, players create their own Inkling, a kid who has the power to turn into a squid. This ability allows for map traversal like no other game, where players cover the map in their own ink color and then can swim through it. This lets you get around quicker, but also allows for interesting navigation methods, like climbing walls or swimming through fences and pipes.

Most players will be snatching up their copy of Splatoon 2 and hopping right into multiplayer, but it does contain a robust and fun single player campaign. Just like the first game, players will explore small hub worlds, finding the entrances to levels by splattering ink around and finding hidden paths. Once inside, the maps are fairly straight forward, offering linear levels full of platforming, shooting, and hidden items. Complete a few of these and you’ll head into a boss fight that acts much like a Zelda style puzzle boss. Using different weapons you’ll have to figure out how to attack the boss’ weak point, delivering three attacks to end them. 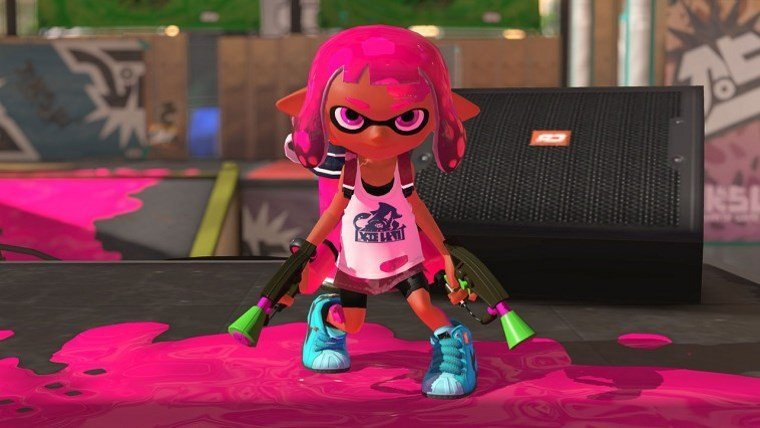 The story is pretty bare bones, unfortunately. Taking place two years after the first Splatoon, the Great Zapfish is missing once again, but this time so is pop sensation Callie, of the Callie and Marie duo the Squid Sisters. Once again players become secret agents on the hunt for the Great Zapfish while battling Octarians and Octolings whenever they show their faces. The real fun here is in the gameplay, which hasn’t been reworked, but does have some nice new tweaks. Little additions, such as giant rideable robots that can be directed with your ink and floating orbs that zip you across the map, make for interesting new takes on the Splatoon campaign formula.

Splatoon 2 is simply a fantastic and fun shooter

Online is where Splatoon 2 really sings though. The series has its own unique take on online shooting and its just as fun on the Switch as it was on Wii U. Turf War is where you’ll spend the majority of your time, with two teams of four trying to cover the map in their color ink. This shifts the focus of the game off killing each other and onto map control, though direct confrontations are still a key factor. Other objective based shooters do this as well, but none quite like Splatoon  and Splatoon 2. Everything about the match forces you to focus on the objective, with your score and special ability all tied to covering the map in ink. If you want something different from your shooters, or are just looking for a less stressful multiplayer experience you will find it here once again.

You can’t just jump into multiplayer and experience everything right away though, you need to build up your rank. Weapons and other features are tied to this, but it never goes down, so it’s just a matter of putting in enough time. Once you do rank up enough you can unlock Ranked and League battles. In Ranked you can play more than just Turf Wars, such as Splat Zones, Tower Control, and Rainmaker. League is a two hour long set of Ranked matches, so it is for the dedicated crowd only. Each offers a nice departure from the main mode while presenting a more competitive environment thanks to the rank and skill requirements. However, it’s unfortunate that once again we’re left without a solid voice chat option. An app is coming, but it seems cumbersome and only allows for talking to friends. 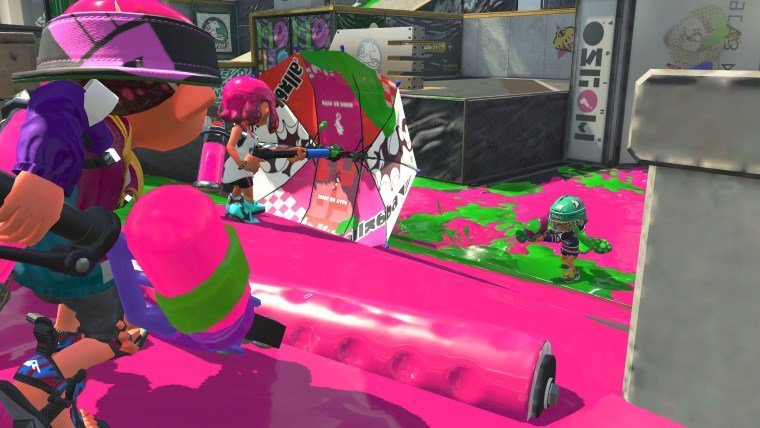 So far, pretty much everything I’ve talked about can be found both in Splatoon 2 and the Wii U original, so what’s changed? Well, not a lot, as Nintendo seems to have taken the “if it ain’t broke, don’t fix it” mentality here. That works well, giving Switch owners another fantastic game to play without messing up what made it work the first time around. But if you did put a lot of time into the first game, you might feel less excited overall.

There are new additions though, such as new maps, weapons, and gear. The maps fit the overall theme well and present players with some nice variation in their Turf War matches. Few standout as being the best because each feels solid by itself. Some feature more open environments, others narrow pathways. These slight alteration really shift the game though, forcing players to always work with the map and their teammates if they want to win. The first game infamously launched with pretty slim map and mode selections, so it’s good that Splatoon 2 is hitting the ground running with enough good options, though more are expected in future updates.

Weapons have been messed with a bit as well, removing some and adding others, giving players a fantastic slate of items to choose from. Dualies are a new personal favorite, with ridiculously fast firing rates being countered by low damage and range. Old favorites have also been tweaked, such as the Roller that can now fling ink vertically. Players will have to figure out what works for them, but don’t be surprised if you end up bouncing between weapon types throughout your time with the game. Balance is a key part of the Splatoon 2 experience, and while some strategies will likely be seen as better overall, so far it looks like players can choose based on what fits their play style best, or just what they enjoy, and not worry too much about what other players are doing.

Gear plays into this as well with headgear and clothing giving players boosts and other benefits. Each item can have multiple of these buffs that include faster respawns, better ink management, and faster swimming speeds. This was all true in the last game, but the selection seems better right out of the gate for Splatoon 2. I’ve already put way too much time into customizing my character, and after awhile I end up finding something else that make me change my whole setup. 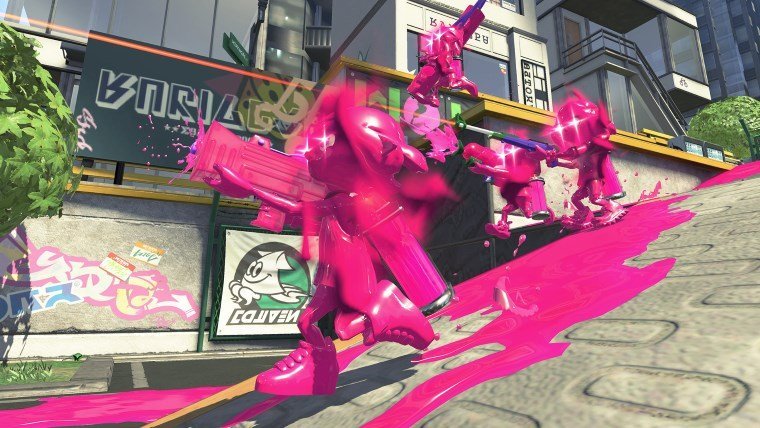 Visuals have also seen some improvement, though without going back to check players might not believe it at first. Splatoon 2 is simply gorgeous, as the first game was on Wii U. Where this sequel improves things is in small touches that vastly improve the overall feel of the game. Flecks of glitter show through your ink, characters are more active and fluid in their animations, and the already great style of the game has seen key improvements throughout. Splatoon 2 might not be the most realistic game on the market, but its bright, colorful world will always be pleasing to the eye.

The mere fact that Splatoon 2 is released on the Switch also gives it one distinct advantage: being playable on the go. There’s no doubt that playing in docked mode is best, offering crisper visuals, better sound, better controls, and a larger screen. However, handheld mode works surprisingly well, especially thanks to the option to set specific controls per mode. When playing docked I preferred using the Pro Controller with motion on, but moving the Switch around was a bit odd, so there I just use the usual twin stick method.

Another new addition, and easily the biggest this sequel offers, is Salmon Run. This is Splatoon 2’s take on the four player cooperative horde shooter mode. Players will battle surging enemy forces as they collect Golden Eggs from fallen bosses. There’s a nice variety of bosses to contend with, and you won’t just see one per wave, creating a frantic environment when the map is filled with enemies. Meet your Golden Egg quota and you’ll move on to the next wave, with the tide possibly moving in or out to alter the map. 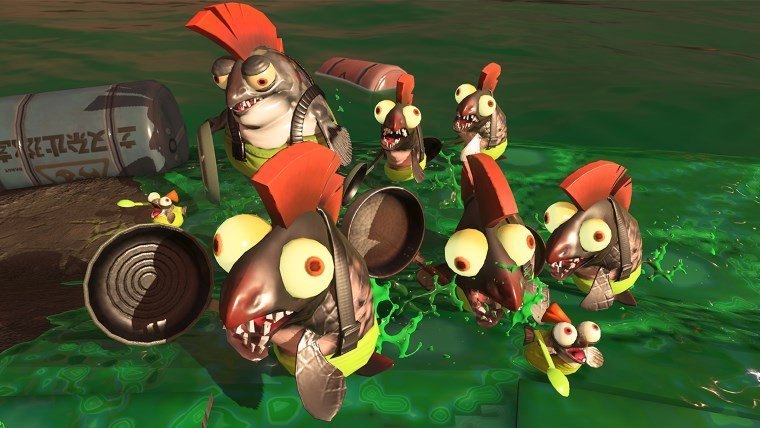 Salmon Run is a lot of fun and gives players some additional variety within the overall Splatoon 2 experience. If you’re taking your Switch on the go, it’s a great way to play with friends, as you can play it and most other modes locally via wireless. Salmon Run can also be played online, though matchmaking is a timed event, so I don’t see it being anyone’s most played mode. Still, for those who prefer co-op, this is a fantastic new addition that adds a lot of value to the game.

Splatoon 2’s list of changes and additions from the last game might make it feel a little light, but the actual experience of the game is stronger than it first appears. Players can immediately get the feel of the game once again, but the small quality of life improvements will only be apparent to the hardcore set. The real reason to buy the game though is that this is simply a fantastic and fun shooter with the level of quality and charm expected out of Nintendo. The style is unique, the music is great, and every game played will almost certainly end with that great gaming phrase “just one more.”