Return to Mineral Town in this charming remake. 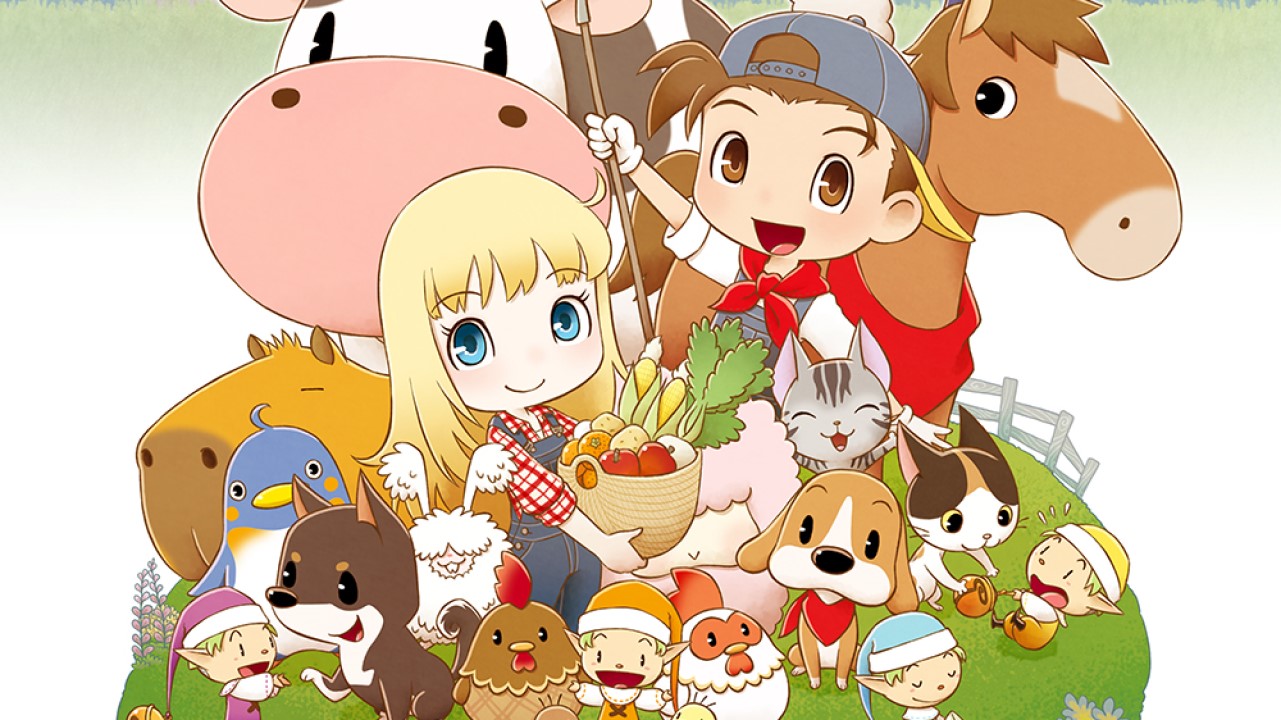 It’s barely the end of my first year in Mineral Town, yet Marie is eyeing me with romantic interest. My burgeoning little farm didn’t have much to offer at the start, but it did have a grape tree, and Marie loved wild grapes. I’d dole them out after working the land to raise my reputation with the locals, but Marie – sweet, reclusive Marie – adored the gift. Winter wasn’t even out, but I’d already established a relationship. 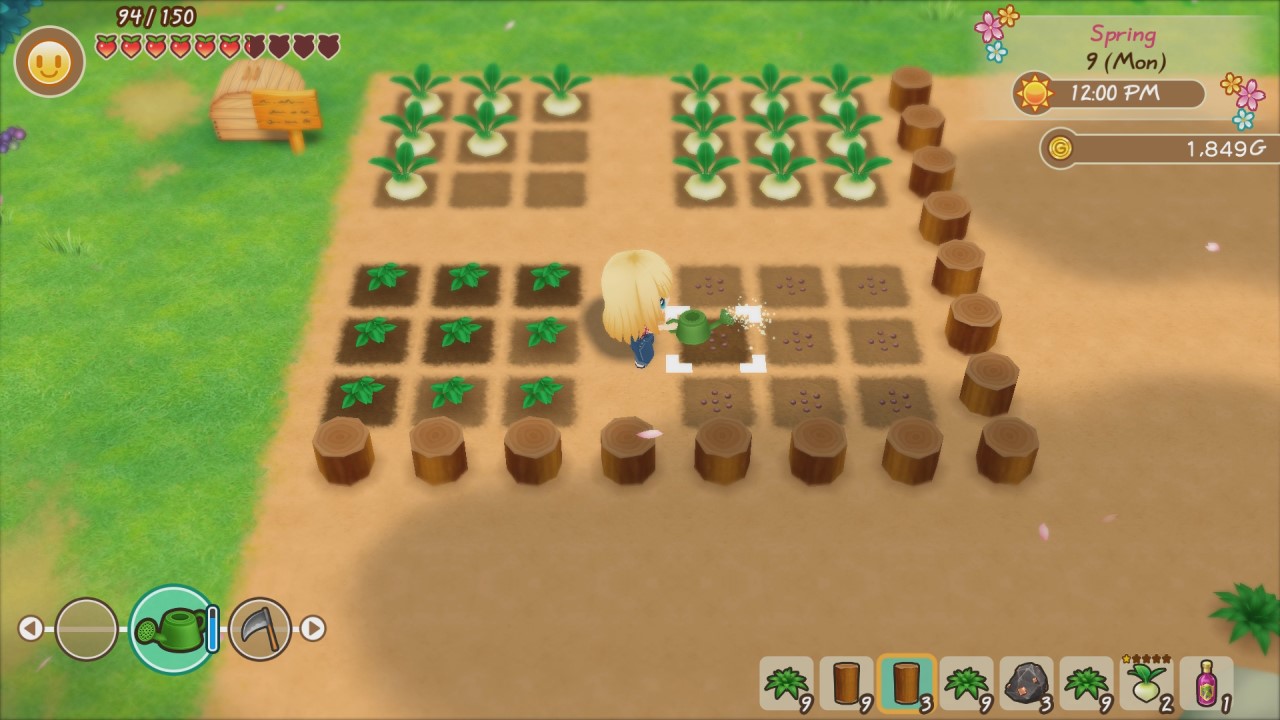 Anyone who played the original Mineral Towns on the Game Boy Advance will find themselves syncing with Story of Seasons: Friends of Mineral Town’s general flow in short order. The remake is by and large the same game, just with new 3D graphics, a refreshed art style, and a few notable changes to modernize the experience. The call to action for your young farmer (of which there are four to choose from; two male and two female) remains simple: you wake up one morning to discover you’ve inherited a farm from your late grandfather (the setup from Harvest Moon: Back to Nature, which the Mineral Town games are themselves remakes of). You trot on over from the big city to Mineral Town, where you’re greeted by the mayor and given the farm to attend to as you see fit.

From here the game will introduce you to some tutorials whenever you try something new, but you’re otherwise left to your own devices. You can start tilling the land and planting seeds for harvest, spelunking the depths of the nearby mine, or foraging for goodies around Mother’s Hill to use as gifts for the locals. It’s on each player to find the rhythm best suited to their playstyle, which is as refreshing as it is daunting. In Story of Seasons: Friends of Mineral Town your success is entirely in your hands.

When you either head to bed or the clock strikes 6am a new day will dawn, and you’ll be free to pursue tasks at your leisure. There are four seasons in Story of Seasons: Friends of Mineral Town, each lasting 30 days apiece. Certain crops, activities, and events are only available during one season or another. You can engage with or ignore these all as you see fit, because Friends of Mineral Town expects you to play the long game. Some relationships take decades to complete, expanding your farm will extend beyond a single year, and livestock can be bred over time to produce better goods.

If you’ve never played a Harvest Moon game before, but enjoyed Stardew Valley then you’ll pick up what Friends of Mineral Town is throwing down. There isn’t a definitive end to these games; not in the traditional sense. You farm, you mingle, you mine, and you grow as the years wear on. It’s a simple loop, but an effective one. Plant some pineapples in the summer, gift Marie some grapes from your fruit tree, and make friends with the Nature Sprites in return for their assistance on your farm. Or, see how deep you can go in the Spring Mine before taking a soothing soak in the hot springs before your next excavation. Whatever floats your ducks, essentially (sadly, the game doesn’t have ducks). 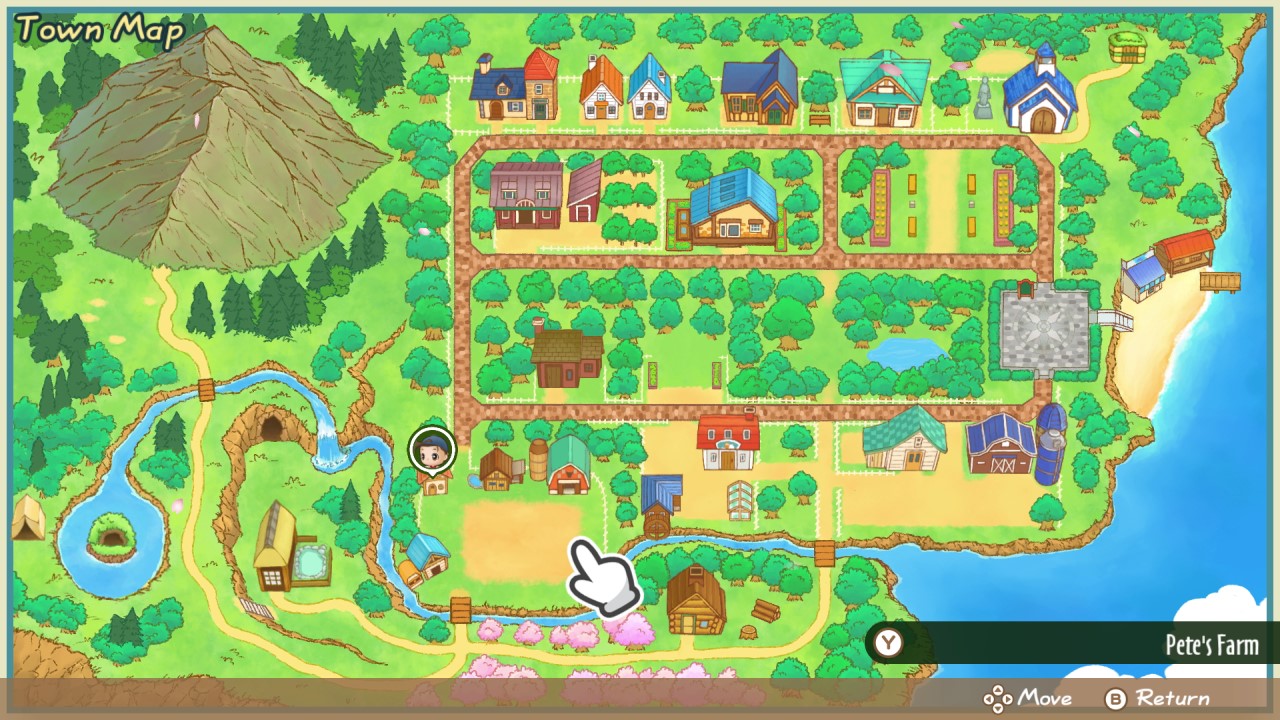 There are smaller loops to engage with that keep the whole affair from becoming too repetitive, such as upgrading your equipment, farming the materials needed for a larger home, increasing your reputation among the locals to see how their narratives play out, and breeding the best horse for the spring races. There’s a litany of little tasks all vying for your attention, and thanks to the constant forward movement of time you can’t reasonably complete them all within a single year, or in some cases decade. Each day becomes a series of to-do lists, and there’s a true sense of joy to be found once you’ve identified your groove in Story of Seasons: Friends of Mineral Town.

A large part of what makes the game work is how unrestricted your time actually is. Unlike Stardew Valley, there isn’t a set point you must be in bed. You can whittle away at the hours with abandon, so long as you keep an eye on your stamina and fatigue. Stamina is reduced by performing physical actions, such as watering your crops or chopping wood. Fatigue is what dictates whether you stay up all night or pass out and wind up in the medical clinic. Fatigue will begin to deplete after you’ve exhausted your stamina, while awake late at night, or when working during inclement weather. If you have the right food or frequent the hot springs enough you can keep these resources topped-off, effectively going without rest for as long as you can keep your fatigue from crashing.

In Story of Seasons: Friends of Mineral Town you are rewarded for successful forward thinking and planning. Befriending the Nature Sprites and playing games with them will lead to less time personally tending to your farm. Maxing out relationships will unlock new recipes that’ll keep you awake longer, or sell for greater profits than the base materials alone would have. There’s always a clear path towards greater efficiency, and it’s easy to lose actual hours of your life to “one more day”, just to see your plans come to fruition.

A few tweaks and adjustments have been made to Friends of Mineral Town to keep it up to current standards, and they are mostly well-implemented. Inventory management is perhaps the best alteration: the D-pad controls your tools, and the right stick cycles through your inventory. Thanks to this separation tools have their own pouch divorced from your inventory, meaning you’ll rarely need to return to your storage bin to swap items around (especially after you’ve grabbed the Big Bag and Bigger Bag). Interacting with the world, your farm, and your items is kept simple, and the controls quickly fade into a smooth muscle memory. 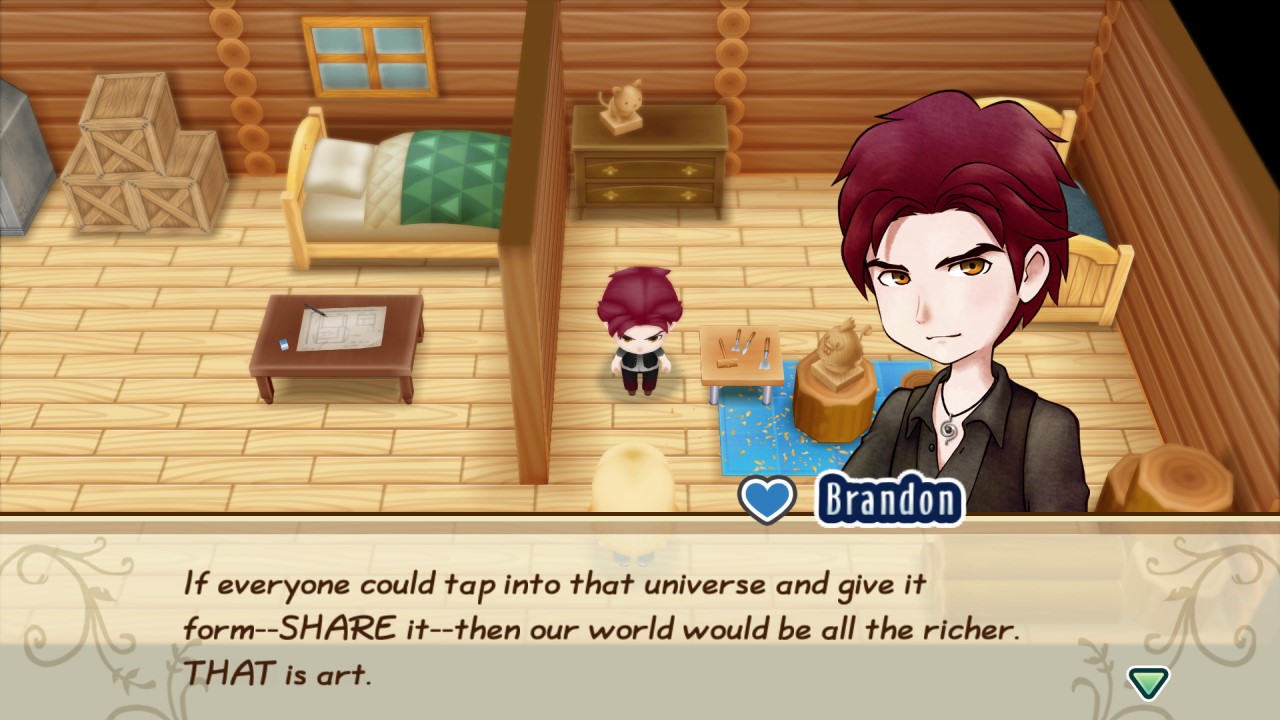 Crops can now increase in quality with better soil, though this is achieved through an upgrade system unlocked after the first year and not with fertilizer. You can unlock an elevator for the mines, though it only travels 50 floors at a time and you’ll need to shower the Harvest Goddess with 100 daily gifts to earn it. All the traditional romantic partners from both Friends of Mineral Town and More Friends of Mineral Town are present here, but they have two extra heart events and there aren’t any restrictions on same-sex marriages (no longer titled “Best Friends”). There are even two additional partners – the eclectic artist Brandon, and flower-child Jennifer – to woo.

Story of Seasons: Friends of Mineral Town is captivating from a gameplay standpoint. The whole experience is held together by a charming art-style that pops with color and simple detail. Existing fans will likely be dismayed to discover the original games’ character designs have been overhauled here, and that some characters barely look the same. The character portraits are well drawn and convey a host of emotions, but some returning favorites appear dramatically different.

Karen, who once sported blonde highlights and looked like the Midwestern gals I knew in Oklahoma capable of drinking most men under the table, has a more valley-girl inspired aesthetic. Ann (now Ran) has completely ditched her former tomboy apparel. I was personally fine with the updates (let’s be honest, the originals were belligerently influenced by the 90’s), but it’s worth noting for returning fans who hold the original characters near and dear to their hearts.

The graphics reminded me a bit of Animal Crossing: New Horizons, largely in a good way. Everything is awash with color, and each season brings a stark shift in the overall pallet. Objects, buildings, and NPCs are simple in concept, but they’re all well designed with just the right amount of detail. I played Story of Seasons: Friends of Mineral Town on the Nintendo Switch, and the game ran fantastically in both docked and handheld modes. Resolution remained crisp, and the framerate a buttery smooth 60 FPS. It often felt like I was playing a first-party Nintendo title, which is by no means faint praise. 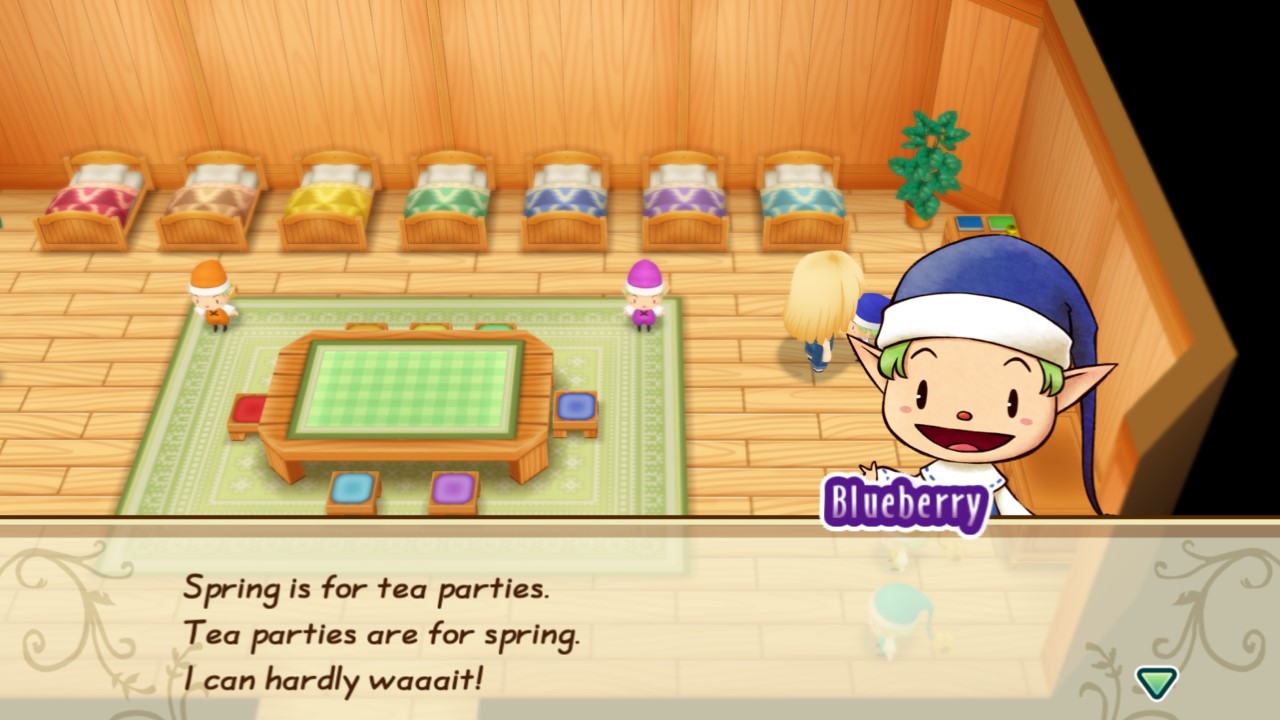 A couple of things hold Story of Seasons: Friends of Mineral Town back, however, though nothing I’m about to discuss is cataclysmic. In anything, they’re bits and bobs I wouldn’t expect a remake to alter, but they haven’t aged as well as other facets of the game. For starters, your farm will remain a relatively static affair. You get the one barn and the one coop, and while they can be upgraded you won’t have the same freedom to specialize your farm as thoroughly as you could in more recent farming games. What you see at the start is largely what you get.

Mining has perhaps aged the worst, even with the new elevator. There are two mines in Story of Seasons: Friends of Mineral Town – one accessible year-round, and one only available during the winter. Both of them have a staggering 255 floors to explore, and if the gods of randomization are not with you then reaching the bottom is a slog. There’s a reason people used a dual-save technique to clear them back in 2003, and that technique remains viable today. I’m fine with neither having enemies, a la Stardew, but it would have been nice if the elevator for the always-available Spring Mine was unlocked by default and stopped every five to ten floors. This minor adjustment would make the Lake Mine the more lucrative yet daunting excursion, but instead they’re both a pain to complete.

Music is largely comprised of remastered tracks from the original, which is great for returning fans looking for that delicious dopamine drop, but they all grow pretty old pretty damn quick. The arrangements are lovely, but their limited length means they’ll loop over, and over, and over again, with few tracks interspersed to break things up. The music’s good in isolation, but a little more variety would have been appreciated.

Finally, Rival Marriages are gone, despite many of the events remaining in-game. While the system did force players into picking their romance early on, it also added an extra layer of immersion to the original Friends of Harvest Town. Townsfolk interacted with each other, fell in love, got married, and started families of their own. The town grew and evolved around you, with or without your involvement. Without the system in place the world within Story of Seasons: Friends of Mineral Town often feels like it revolves entirely around you, which saps the some of the magic away. 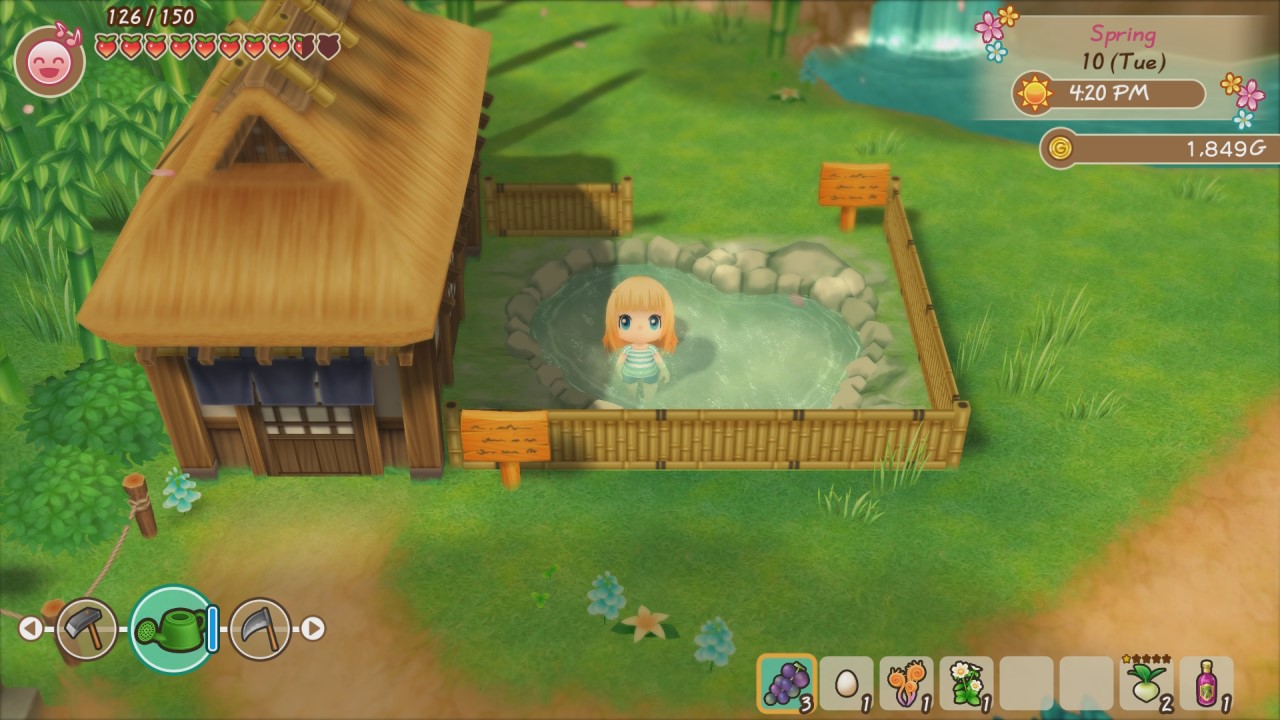 These are all relatively minor nitpicks (except maybe the mines). In no way do they undermine the laid back nature of Friends of Mineral Town; they just stick out like sore, green thumbs. If those grumbles sound like small potatoes to you then I heartily recommend giving Story of Seasons: Friends of Mineral Town a peak. It’s a fine game that leans on artful repetition, and if you find yourself in-sync with its casual ebb and flow then you’ll get more than your $50 worth out of the game.

Story of Seasons: Friends of Mineral Town is a must-play for both fans of the franchise, and gamers in love with farming oriented life-sims. It doesn’t opt to break new ground, but instead play to its strengths, leaning on what made the experience great 17 years ago. So long as you don’t mind the game lacking some of the extra flair found in more recent titles, or the bits that haven’t matured as superbly as others, you’ll easily lose a real season or two to cultivating your farm and relationships in quaint, little ole’ Mineral Town.