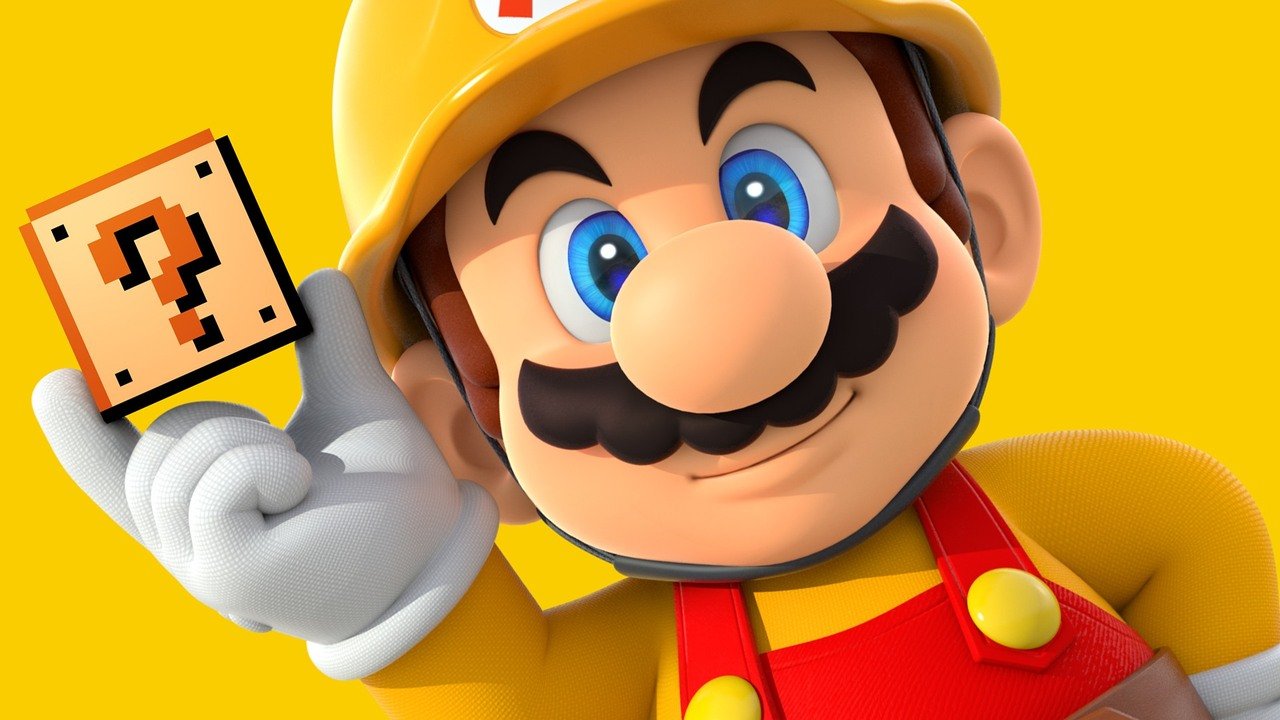 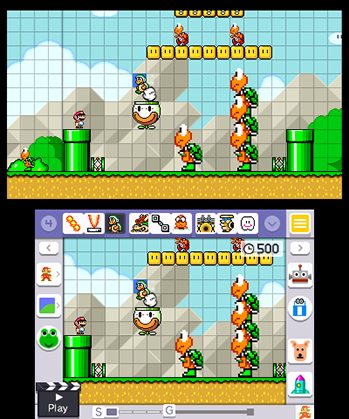 So let’s get the bad stuff out of the way first.  Unlike the Wii U version, Super Mario Maker on the 3DS doesn’t allow players to upload and share levels like they did on the console. Instead, you can connect to the internet and access many courses that have already been created by Wii U Mario Maker players.  These recommended courses seem to be hand-curated by Nintendo or some popularity algorithm on their end.  You can save these courses to your handheld, or play them right away.  On the other hand, you can also make courses.  They just can’t be uploaded like they were on the Wii U.  They are reserved for Local Play only, and you’ll need a Wi-fi connection to send courses to local players or designate your creations for Street Pass consumption.  While I say this is the “bad stuff,” it doesn’t feel all that bad.  It’s just different than the Wii U, and a little less feature rich in terms of sharing with others.  There’s still plenty to play here when it comes to unique Mario levels, across the developer-made 100 Mario Challenge, the curated 100 Mario Challenge, or the Recommended Courses that you can play or download and save for later. 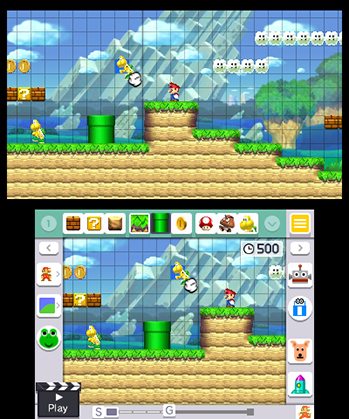 For those that just want to play Mario Maker levels on their 3DS, there seems to be a ton of content here.  The Nintendo-made levels are great.  The offline 100 Mario Challenge is diverse, and offers plenty of challenge in terms of gameplay.  This mode also features side challenges as well that will allow you to earn medals for completing specific objectives as well as featuring secret objectives in each level.  Going through the 100 Mario Challenge offline, you’ll also unlock plenty of tools to create with as well, so there’s that added bonus if you do plan on doing some creating of your own.  That said, and it’ll be a recurring theme of this review, the creation aspect of Mario Maker on 3DS seems a little unnecessary as you’re only sharing your content on a Street Pass/Local level.  It’s still fun to create new content, and who knows who you’ll run into and what levels you might find out in the wild.  Outside of the sharing stipulations, Mario Maker on the 3DS plays pretty similarly to the Wii U version.  Players use a stylus to create content on the bottom screen, while the top screen is reserved for a better view of things, or actually playing levels themselves.  It’s a good set-up for Mario Maker and works as it did on the Wii U with its dual screen approach.  What Mario Maker on the 3DS does do that is somewhat different than its Wii U counterpart is allow players to collaborate on levels, sharing incomplete creations and letting groups of friends work together on a level to make that perfect creation.

Anyone can pick up Mario Maker on the 3DS and have a great time just playing the many levels available to them.  And yes, I’ve said that the course creation aspects may feel a little gimped due to the way that they are shared, but there’s still a robust set of creation tools here.  You don’t have to be a veteran of the Wii U version to get up and running in creating levels.  There’s a very well designed tutorial and progression system in place that explains all of the different visual styles, enemies, and functional items that can be used in creating levels for the game.  You can access this at any time in the menu, and a friendly pigeon will guide you to creation nirvana.  As you play, you’ll continually unlock more and more items to have at your creative disposal.  Using the stylus and a number of onscreen prompts you can tap and drag your way to great creations in Super Mario Maker on 3DS.  It’s still very much a game for those with creative aspirations to build the ultimate Mario level limited only by imagination.  That said, there is the caveat that Mario Maker on 3DS is a much more compact experience.  The Wii U tablet is a much larger canvas to create on than the 3DS, so things can feel a little more restricted than on the console version.  It’s all still pixel perfect though, you won’t have much trouble creating that perfect level, if you don’t mind dealing with tools that make use of every part of the 3DS’s lower screen and the handheld’s smaller form factor. 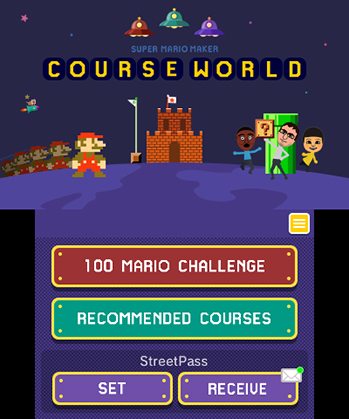 The fun that most had, and where much of Mario Maker on Wii U’s critical acclaim came from is from the sheer breadth of content, and you’ll find that in the online mode called Course World.  This is the online aspect of Mario Maker on 3DS which ties back to the Wii U version of the game.  There have been millions of levels created on the Wii U, and you can get access to many of these courses in Mario Maker on 3DS either by piecemeal or through a totally separate 100 Mario Challenge that hails from the Wii U version of Mario Maker.  But keep in mind that not all levels created in the Wii U version are going to show up or are compatible with the 3DS version.  The online 100 Mario Challenge allows you to select from numerous difficulties, which again, adds for an incredible amount of variety in the game whether you’re a casual player or an expert.  Each and every time we fired up the online 100 Mario Challenge we were treated to a new selection of levels that have been created on the Wii U.  When Nintendo says there’s a “near infinite” number of levels to play in Mario Maker on the 3DS, it really feels that way.  Testing this was done by starting new challenges on the same difficulty to see what happened, and each time the 100 Mario Challenge felt unique.  It’s hard to tell just how endless this really is, but it certainly feels like there are a ton of levels out there that will randomly populate into this online mode each time you start, and on each difficulty level.  Even with curation by Nintendo, mileage is going to vary on a lot of the user created courses, some of them just aren’t that good, but then again, there are some incredible creations as well.  Online in Mario Maker on the 3DS is all about trying new things.

If you don’t want to tackle the 100 Mario Challenge in the online mode, you can browse courses as well — You just can’t browse 3DS created courses.   Everytime you fire up the Recommended Course feature, you’ll be treated to a batch of recommendations, which can then be filtered by difficulty.  A short description and preview will be shown, along with the creator’s Mii, and country of origin.  If you don’t like what you see you can refresh the list for a brand new batch of recommendations.  If you see something interesting you can either play the course right then and there, or download the course to play it later.  Those courses that you save, as well as any courses that you’ve made yourself, will be saved to your “My Courses” section of the game.  This area stores 120 created courses.  You can also go back and keep track of the Nintendo-made challenge courses and your progress in the offline 100 Mario Challenge, as well as individual objective challenges and medals earned for each.  Alongside that, Mario Maker on 3DS keeps track of all of your progress across the online and offline modes of the game via your profile.  This details the number of 100 Mario Challenge clears per skill level, medals earned, courses played, and items that have been shared or exchanged. 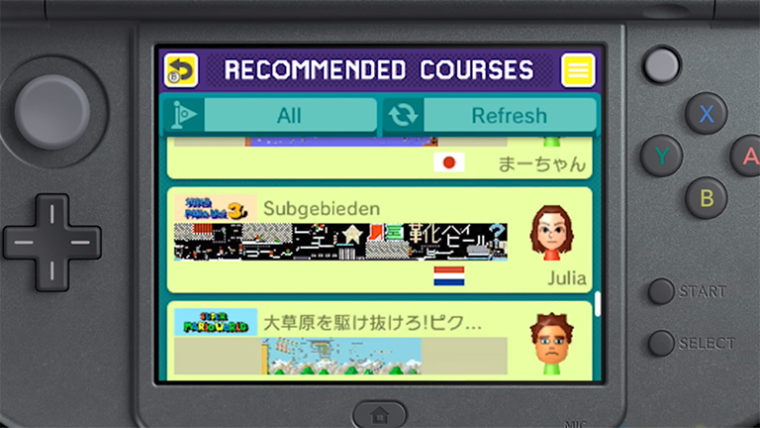 For fans of the 3D aspects of the the Nintendo 3DS, you won’t have that functionality in Super Mario Maker on the handheld.  The game does not support 3D at all, regardless of the model of your device.  Personally, that probably saves some headache for myself as I rarely use the functionality, but if you’re a fan and expecting this from the game, you’ve been warned.  Even without the 3D functionality the game looks great across all of the different aesthetic styles.  Though it is worth pointing out that the 3DS seems a little underpowered at some points, offering slowdown when the handheld gets bogged down by many items on screen at a given time.  One level in particular saw an abundance of coins on the screen and the system seemed to chug through it.  Eventhough it was a one off situation, you could see how it could be a problem, but it was hard to replicate the issue.

If you’re looking for endless side-scrolling action on a handheld, you aren’t going to do better than Super Mario Maker on 3DS.  It’s the most Super Mario we’ve seen packed into the handheld to date with a seemingly endless number of levels to tackle that will keep you busy as long as you let it.  However, mileage will vary in terms of user created content and its quality when compared to Nintendo’s own levels when digging into the online aspects of the game.  The creation tools are on par with the console version, but the sharing is limited to local friends or street pass strangers and that’s kind of a let-down.  While you won’t be able to send that perfectly created level out to Mario Maker players across the world from the 3DS, there’s plenty to sink your teeth into where the leg work has already been done.