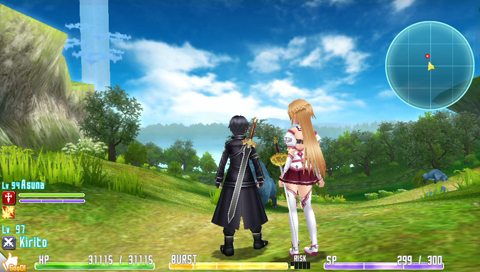 Sword Art Online: Hollow Fragment allows players to customize their character at the start of the game, as it takes players into the world of an MMORPG that their character is living through, with one catch, if you die in the game, you die for real. Players can customize the name, hair, face and voice of the main character Kirito. Fans will want to note that the story takes place in an alternate timeline to the anime’s first arc. Kirito and others are stuck within Sword Art Online and have to fend for themselves against various enemies within the game.

The player inhabitants of Sword Art Online make their home in the sanctuary of Arc Sophia, which serves as your main base and hub for the game. From here you have access to a variety of shops and side-missions via player interaction or the quest board. You and your fellow assault team members’ main goal is to conquer floor one-hundred of the Labyrinth tower — thankfully the game starts you on floor seventy-six. You can choose to take on the main goal of the tower, explore the area, or take on the Hollowed area which nets greater items and secrets. These will help in making your way up the tower.

The Hollowed area has its own missions that can be tracked on the map. In these instances you simply defeat the enemies in the designated area and get rewarded. Progress is in the Hollowed area is similar to that which you would find in a dungeon-like area.  So as you find new areas,  you can also find teleportation stones to bring you back to the main Hollow computer. You can travel from the Hollow computer and select individual missions and research missions which are sort of like sub-missions such as ‘get x amount of kills while dodging’ or something along those lines. You can choose to take one other character with you from the Arc, and as you progress you will meet more people within the Arc to interact with and help them out as well. If you build a relationship by helping them they will be able to be recruited for future missions.

There are over one-hundred characters to recruit. There is even a dating simulation element to friendships in the game. In if you choose a partner, you can take them around the Arc and buy them food if they are hungry, and talk to them — most importantly if a speech bubble appears above them in orange it means they want to talk. Doing all these various things adds to your intimacy with them and it ranges from stranger, to friendship, all the way to love. The conversations play out as little timed mini-games that require you to press the R or O (circle) button when the prompt appears to build their interest in you. It’s a fine mechanic but if you find a spot where that specific person wants to talk, you can continuously do it until you max out their intimacy.

The gameplay is rather deep as it allows you to mold Kirito how you see fit. You’ll have an ample variety of weapons to choose from, by default he dual wields swords. The character progression system allows you to structure a lengthy skill tree. As you progress you’ll earn more skill points to spend, and certain ones require you to have certain skills before the next tier unlocks. Fighting can be complicated, as it has you rely on an ever increasing gauge. The higher the gauge, the more powerful your attacks, so if you spam the button it makes your attack fairly weak. Combined with skills that work off of what is essentially a skill point gauge that also fills up as you battle, combos can be devasting. Pressing either shoulder button turns the face buttons into skill attacks or defense skills such as healing, or replenishing your skill gauge at the cost of some defense. It really is all about fighting a medium that is right for the player and some can really appreciate how deep the combat can be.

The graphics are pretty good for a JRPG on the Vita, especially for one that has many elements of its PSP brother, but thankfully this version has been retouched. The cutscenes are rather great to look at– they mix elements of the anime with the three dimensional look of the game. The character artwork during story conversations is about what many JRPG fans have come to expect — the character lips move and eyes blink so there is no major negative aspect about it. The controls on the other hand may take a while for some to get used to, as by default, it has a Japanese control scheme where circle is confirm and cross is back. This can be confusing for those who are not familiar with this type of control scheme. There is no immediate way to change the control options either. It’s also important to note that you’ll be reading a lot. Sword Art Online: Hollow Fragment’s spoken dialogue is all in original Japanese.

The aforementioned “Hollowed Area” also serves as a hub for multiplayer, where you can choose to go in with NPC controlled ‘players’ or go on Ad Hoc and play with others.  You can also alter your major attributes, such as distributing stats to create characters with a focus on specific attributes. Alternatively, without altering your character at all, carrying over your attributes from single player. So if you have a level 120 character, he will be 120 within Hollow multiplayer, as well as in the main story.

Sword Art Online: Hollow Fragment does a fine job of combining the PSP title (Sword Art Online: Infinity Moment) and updating it while creating a backdrop of a sequel to it at the same time. This translates into hours upon hours of content on the Playstation Vita. Fans of the franchise who have been waiting for a game to release will be very pleased, if they can get past the minor issues, like the inability to change the control scheme and the lack of an English voiceover. The online functionality is there, but limited to Ad Hoc, which is disappointing. A more robust multiplayer offering could have added even more value to the title. In the end, it is a solid release that anyone looking for a lengthy ‘JRPG with the soul of an MMORPG inside it’ will be happy to own.