For anyone that grew up in the late 1980s and early 1990s, there is a good chance that Teenage Mutant Ninja Turtles was a major part of your childhood. Debuting from Mirage Comics, the series grew into a phenomenon thanks to the cartoon series and movies. The series continued over the years, including a strange live action series with a female Ninja Turtle, that even had a crossover with Power Rangers. While the other series like TMNT 2K3 were successful, the series has recently grown exponentially in popularity again thanks to the new Nickelodeon cartoon, which is very much worth checking out. In addition, building off of the turning franchises from our childhood into movies, TMNT once again got the movie treatment early this month with a movie that got mixed reviews at best, but I still personally enjoyed it quite a bit.

That brings us to Teenage Mutant Ninja Turtles for the Nintendo 3DS, the movie tie-in game that takes place after the events of the movie, though is completely standalone on its own as well. The TMNT series has always been known for quality games, such as the classic side-scrolling beat-em-up TMNT Arcade game and Turtles in Time, but this latest game takes a very different approach which may very well surprise you.

When you think of Ninja Turtles, probably about the last thing you would also think of is Diablo, but that is what will happen when you play this game. Magic Pocket’s Teenage Mutant Ninja Turtles features dungeon crawling gameplay akin to the Diablo series, which is a very unique and interesting path to take the franchise down. For the most part, the TMNT game series have followed the same formula over the years, so this is a very nice surprise to come across from a gameplay standpoint.

As you would expect, you have access to all four of the Ninja Turtles: Leonardo, Donatello, Raphael, and Michaelangelo. Rather than having to only pick one of them to use for a stage, the game features a system similar to TMNT on the NES, to where you can switch back and forth between the Turtles, but it is much more streamlined and easy in this game. Each one is mapped to one of the four directions on the d-pad and can be switched between one another just by simply pressing the corresponding direction. Just about the only times you cannot switch are in the few second cooldown period after switching to one of the Turtles or if you are in a save zone.

Each of the four Ninja Turtles have their signature weapons, with styles specific to each. Leonardo is a balanced fighter with decent speed and above-average attack power as he strikes with his dual katanas. Raphael is the bruiser of the bunch, with very slow movement but the ability to take a lot of damage while doling out pain with the highest attack power in the game, courtesy of his tsais. For those that prefer a little more of a hands-off approach, Michaelangelo is the speediest of the bunch, with his nunchuks allowing for decent up-close combat, but has shurikens to deal ranged attacks. Mikey is also the best one to use while traversing the map, as his speed will get you around much quicker. Lastly, Donatello is somewhat a mix of Leonardo and Mikey, with average attack power and speed, along with the range of his varied bo staffs.

Each one also has a special ability that will be unlocked through story mode at some point, but they are mostly just used to advance further in the game rather than in battle. This includes Raph’s ability to break down large obstacles, Leo’s ability to slash down fences, Donnie’s ability to hack doors, and Mikey’s ability to jump down further into the sewer system to reach further areas of the map.

Teenage Mutant Ninja Turtles features an XP progression system based on your battles throughout the game. For each level you reach, you will obtain skill points that can be used to improve your Turtles, with two new skills being unlocked for every two levels you earn. These two will always include on passive skill, such as improved attack power, and one active skill, which will be some sort of attack that can be mapped to X or A to use in battle as well, beyond your basic B special move. The leveling up system adds a lot to the game and makes you want to keep playing to upgrade your Turtle.

The Ninja Turtles themselves play exactly how you would imagine them

Taking it a step further, you can equip different weapons on each one as well, with the ability to craft even stronger weapons along the way. Each Turtle is still locked to their weapon type, but you will find supplies all around the map that can be used to craft these much stronger weapons. Some of them are pretty basic weapons that just increase your strength, but there are also ones that inflict poison and other status effects. You will come across some weapons in your loot you acquire on the map, but you will be strongest if you craft your own.

The game is split up between 15 story missions and 10 side missions that are pretty linear for the most part. The biggest knock on the game is the length, with the story missions easily able to be completed in under three hours and the side missions adding a little more to that. There are challenges to complete, but just from doing the story missions and side missions, you should be able to complete most every one without much trying, as they are simple tasks such as “Destroy 10 drones” and “Finish Chapter 4.” The game is very easy for the most part as well, but the difficulty is ramped up considerably on the last couple levels, including a grueling final boss battle that seems like it would truly be like something from Diablo in length.

While the game was a ton of fun playing through the first time, the replayability of the game is pretty low. If it has been a long time since you last played and want to play it over again, that is one thing, but once you complete the 25 total missions, you pretty much are done with the game, which can probably be done in around 4-5 hours at the most.

The story is one that Ninja Turtle fans will mostly enjoy, as you see appearances by Baxter Stockman and a few others I’ll leave to be surprises, but due to the short nature we do not get to see it go too in depth. Oddly enough, one of the major changes in the movie script later in the process didn’t seem to make it across to the game, as Shredder is mentioned as being Eric Sacks at one point in this game, but in reality William Fichtner’s Sacks character that was originally meant to be Shredder in the movie was altered later in the process to be a separate antagonist from Shredder completely. 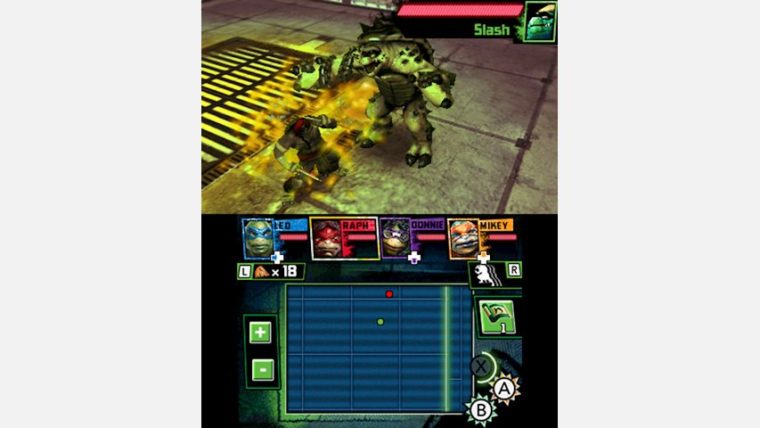 The battles themselves can get a little repetitive after awhile, but luckily we do get new enemies introduced into the mix as we continue through the game. We start with simple Foot Clan soldiers, but later get mutated rats, drones, sentries, and even healers. The few boss battles mixed in are fun as well, including my favorite against one of the Turtle’s enemies that is seen in the image directly above, Slash.

Teenage Mutant Ninja Turtles is a very different take on the franchise than in the past game wise, while managing to succeed in many ways, but also disappoint in a few. The dungeon crawling gameplay is fun, albeit a little repetitive at times, but is greatly enhanced by the XP progression system and the ability to level up the Turtles. The Ninja Turtles themselves play exactly how you would imagine them, which is one of the key elements of any game for this franchise. The biggest drawback is the length of only a few hours at most for a full retail game. At the regular price of $29.99, it is a hard sell, but is certainly worth picking up if you can find it on sale.