A traveler from the past. 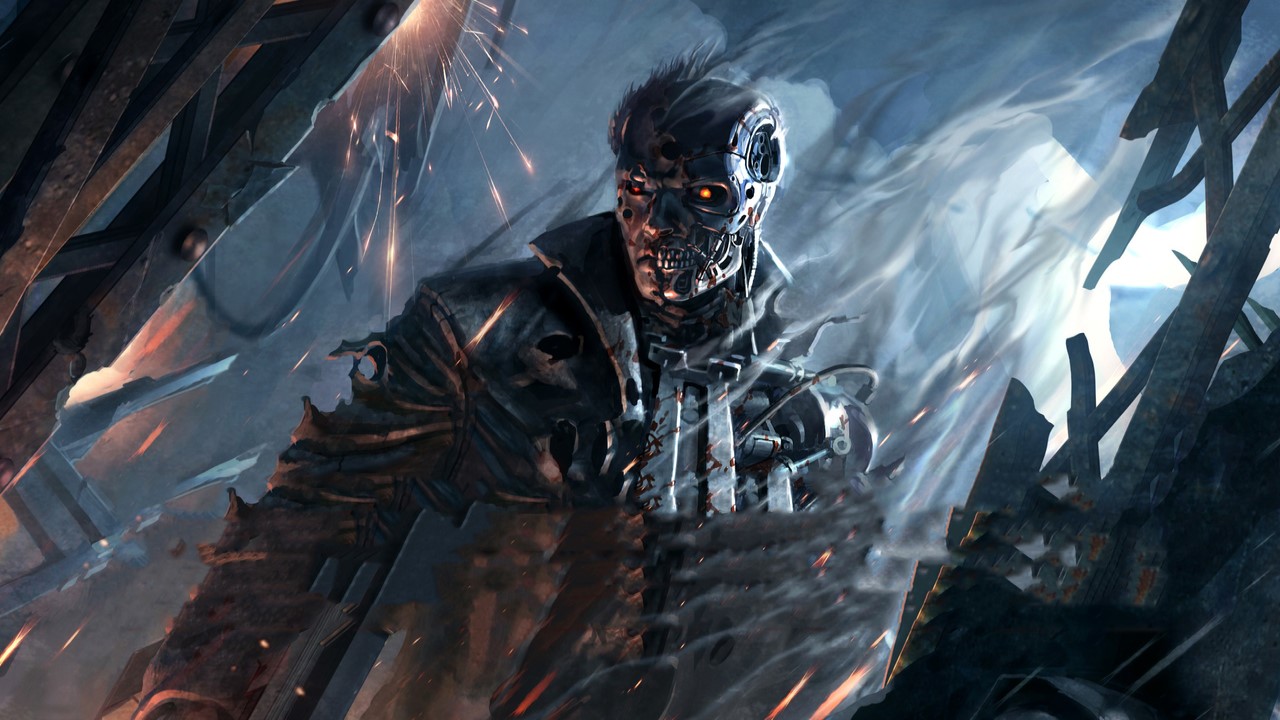 Licensed games tend to have a bad reputation. For every The Chronicles of Riddick: Escape from Butcher Bay, or Batman: Arkham Asylum, there lies a mass grave filled to capacity with the remnants of licensed failures. Sometimes, a successful licensed game within a venerable franchise is a stone’s throw away from a terrible one, such as when Alien: Isolation appeared to salve the wounds Colonial Marines inflicted upon us all. Thankfully, we’ve come a long way since 2008, when licensed games had a tendency to be trash.

Then again, there is the Terminator franchise, long the victim of odd licensing deals, titles, and it’s own decay as a film franchise. With the latest film “Terminator: Dark Fate”, the franchise is poised to reinvigorate itself, so what better time than now to release a new licensed game? After sitting down to play and complete Terminator: Resistance, I’d say that “better” time was more than ten years ago.

Much like Kyle Reese and the handful of other time travelers in the long-running franchise, Terminator: Resistance feels like an entity lost in time. The difference is Reese intended to go back in time, whereas Resistance feels stuck in another era. The story, mercifully, doesn’t concern itself overmuch with the convoluted time-travel, alternate-future foreplay the films have found themselves mired in, and instead takes place after the events of Judgement Day, when John Connor is leading the fight against Skynet’s genocidal purge. 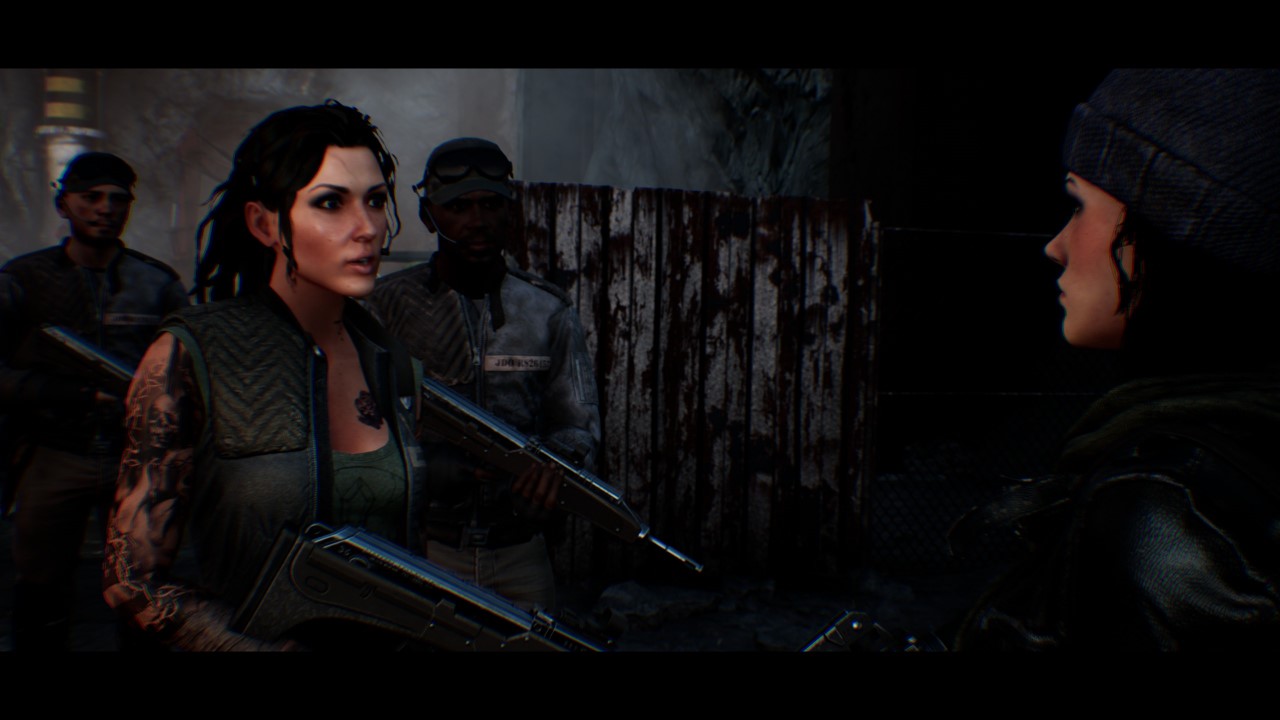 You play as Jacob Rivers, a private from the Resistance’s recently annihilated Pacific Division. You’ll spend much of the game running tasks for a small group of NPCs the game desperately wants you to care about, but the wooden writing undermines all attempts to humanize these characters. The voice actors try their hardest to breath some life into their lines, and it’s commendable, but there is only so much you can do with bad writing. Much of the dialogue is written in such a way that I thought – if only for moment – that maybe, just maybe, these characters were in fact Infiltrators, and it was all a part of some larger plot twist.

Short answer – I was wrong, and gave Terminator: Resistance far more credit than it deserves. This is a game from the late-2000’s school of design, and while it boasts “semi-open” levels to explore, the narrative is a cut-and-dry linear affair that is as predicable as a summer’s day in Las Vegas. The one plot twist that does occur is made hilariously obvious, because the one instance of truly terrible voice-acting in this game makes is painfully obvious who the mysterious character that follows Jacob around actually is. This is a Terminator game, after all, and while it doesn’t go nutty with time-travel, it still features in the story. 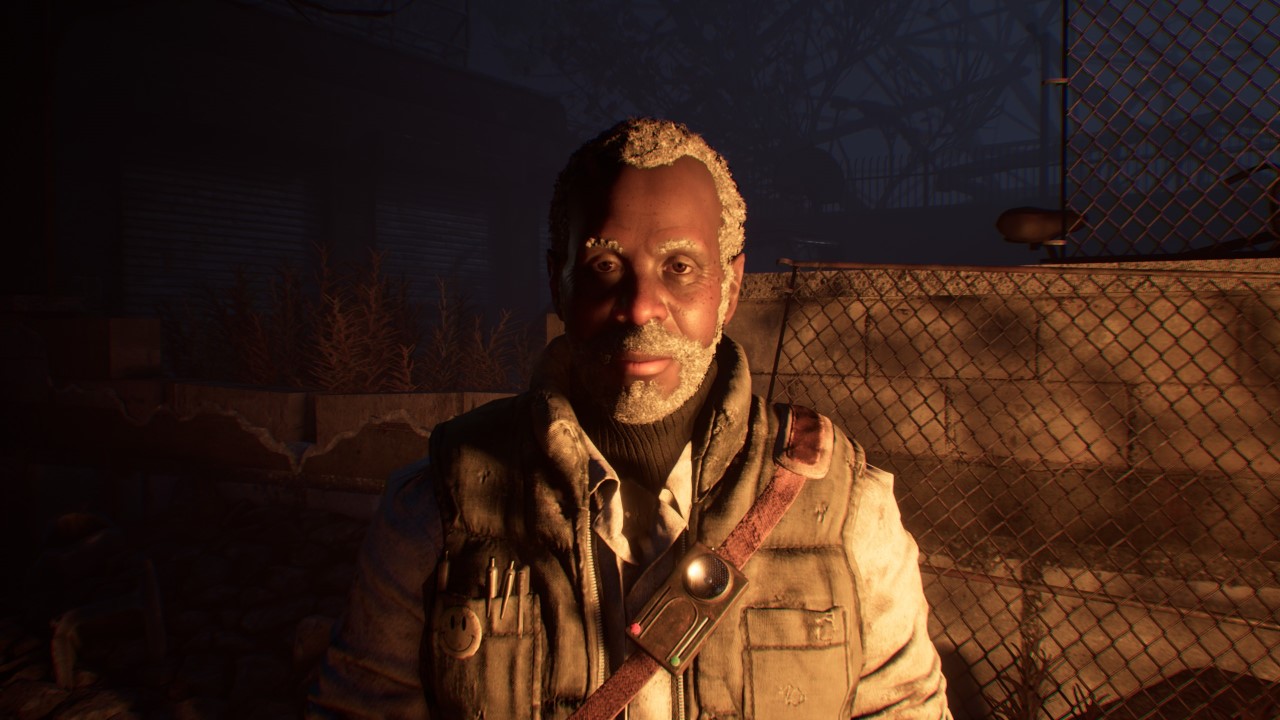 Thankfully, that angle of the tale is easy enough to follow. The game is leading up to Connor’s victory over Skynet in the future, and his eventual sending of Reese and the T-101 (Cyberdyne Systems Model 101, for purists) back in time to protect the past. In this aspect, the story is not all that terrible. It’s a functional tale of the events leading up to the beginnings of the first two films, and fans of the franchise should enjoy the narrative in that regard. They’ll simply have to contend with poor character writing, and half-assed choices that really don’t impact anything.

Cause, yep, Terminator: Resistance seems to have been designed with a “modern features” checklist in hand, and naturally that means your dialog “choices” have an impact! Except, they really don’t. It’s the most patently binary system I’ve seen since Infamous’s “choose the red or blue option”. None of it involves strictly “moral” choices though: do you listen to a character’s backstory, or do you ignore them? Listen, and you can save them later in the game; don’t, and they die. I know, spoilers! But, seriously, that’s all it is. It’s like Resistance wanted to eat Telltale’s cake, yet had no idea how to bake it. So, instead, they tried to frost some cardboard hoping it would look the same, but they also screwed up the frosting.

That said, there are references aplenty to the films, and fans of the franchise will likely crack a faint smile as they encounter them. The touches from Brad Fiedel’s score certainly made me grin like an idiot, but all the nostalgia in the world is not enough to salvage the entire narrative package. The references and careful handling of the license does, however, show Resistance cares about the franchise. The same can be said about gameplay, which is another case of “modern features” being slapped onto a ten-year old chassis largely carried by nostalgia. Terminator: Resistance is a first-person shooter that can’t decide if it wants to be a Fallout or Call of Duty game circa 2008. It certainly controls like a traditional shooter, but it has stealth and open levels full of crafting materials and salvage. Thing is, the game is so confused as to what it wants to be that the open-ended stuff becomes inconsequential. The piddly sounding and flaccid guns all deal decent damage, and ammo is so plentiful you’ll find yourself drowning in it. Same can be said for the health kits, which negates any need to craft them. Sure, you can explore, but you’ll only further exacerbate this issue, stocking up on more ammo and health kits than you’ll ever need.

It could be argued that these systems shine on higher difficulties, but those are designed in such a way they are actually best avoided if you wish to retain your sanity. Enemies become disasters to deal with, with dramatically increased damage and resistance that even the crafting system can’t keep up with. The whole game is emblematic of poor balancing choices. It’s as if Teyon wanted to shoehorn as many modern features into the game as they could, but didn’t have the resources or time to see if they actually interlocked together across all the difficulty settings.

At Normal you’ll pick your one gun and stick with it, becoming a Terminator in your own right as you casually mow down T-800s, T-47s, and every other mechanical bastard Skynet can muster. The fact that the AI is atrocious doesn’t help, and instead neuters the threat these indomitable machines should pose. Once you pick up the Gen 2 plasma weapons you become a certifiable god, and whatever need you may have had to explore evaporates away. 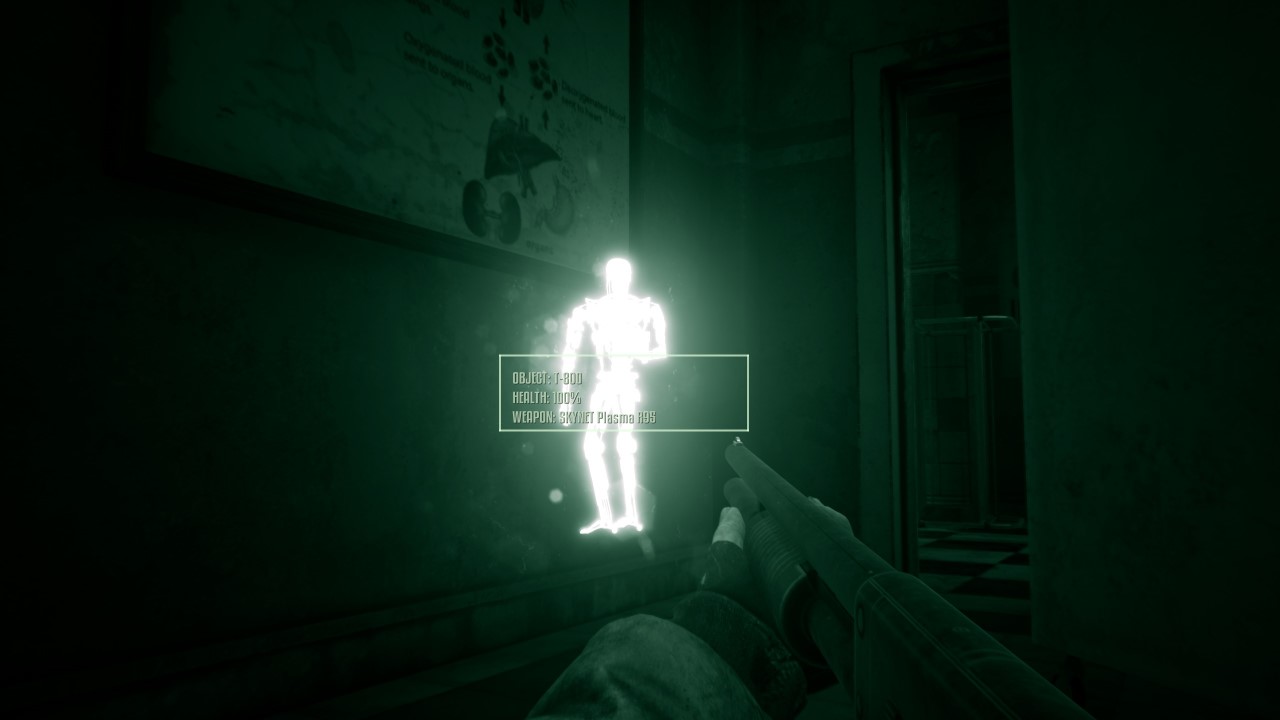 The skill-trees are generic, but tuned in such a way that it doesn’t feel like you are naturally progressing with the game as you level, but instead leap-frogging over it. This issue is further compounded due to certain skills feeling absolutely essential, such as the weapon and toughness trees, making skills like hacking, explosives, and stealth feel less like compelling alternatives and more like items on a checklist Teyon felt had to be included. Throw in the weapon chips you can fit into plasma weapons, and you constantly feel like the monster Terminators should fear, not the other way around.

Dial the difficulty up, and the opposite occurs: every upgrade feels like it isn’t enough, and the game devolves into a painful slog as you hope to make your way forward. Sure, stealth is an option in theory, but the equipment you need to make it viable is buried under late-game skills, making it more a chore than a thrill. If the AI were smarter, a-la Alien: Isolation’s ever-threatening Xenomorph, then maybe the difficulty increase would be worth it, but it’s not, so you spend the entire game slamming your face into a wall covered in rusty nails.

Furthermore, all the mission objectives are of the most basic of basic “go here, do the thing” variety. There were a couple of FarCry style outposts on the map, but there didn’t seem to be much incentive to do them. It didn’t help either that they required an almost slavish dedication to leveling your hacking skills, and seeing as you can’t go back and repeat an area once you’ve left it, the handful of outposts on offer ended up mostly ignored. 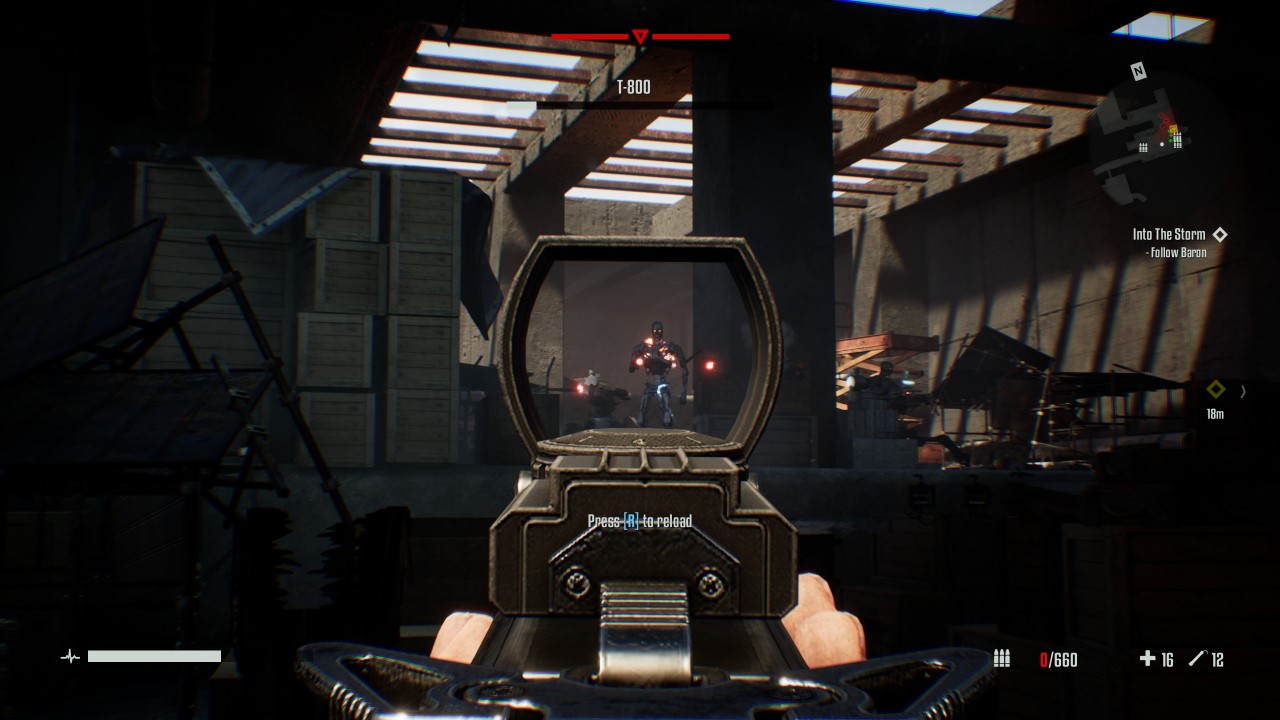 Other objectives were bog-standard fetch quests. Go to location on map, grab the thing: ta-da, you’re done. This could be more exciting if the level design wasn’t the same dreary apocalypse all around, but it isn’t. I know, complaining about the look of a Terminator game sounds somewhat stupid, but hear me out. This isn’t just a matter of “everything is falling apart”, but a problem of “this is the sixteenth time I’ve seen this exact same shop within a block.” When everything is the same, it all bleeds together. There was one level set during the day in a more rural style setting, and trust me when I say it was a revelation…until I realized I had two buildings to give a shit about once the map “opened” up after a linear segment.

The game is only eight-hours long as well, even if you do poke your nose around. Replayability is slim, considering the imbalance between systems in the game, but it’s feasible. Considering the game likes to cycle between slower, exploration segments and decently scripted linear portions, those eight-hours do not feel all that long; this is a short game.

As damning as this all sounds, I do have a confession to make: I didn’t absolutely hate my time with the game. 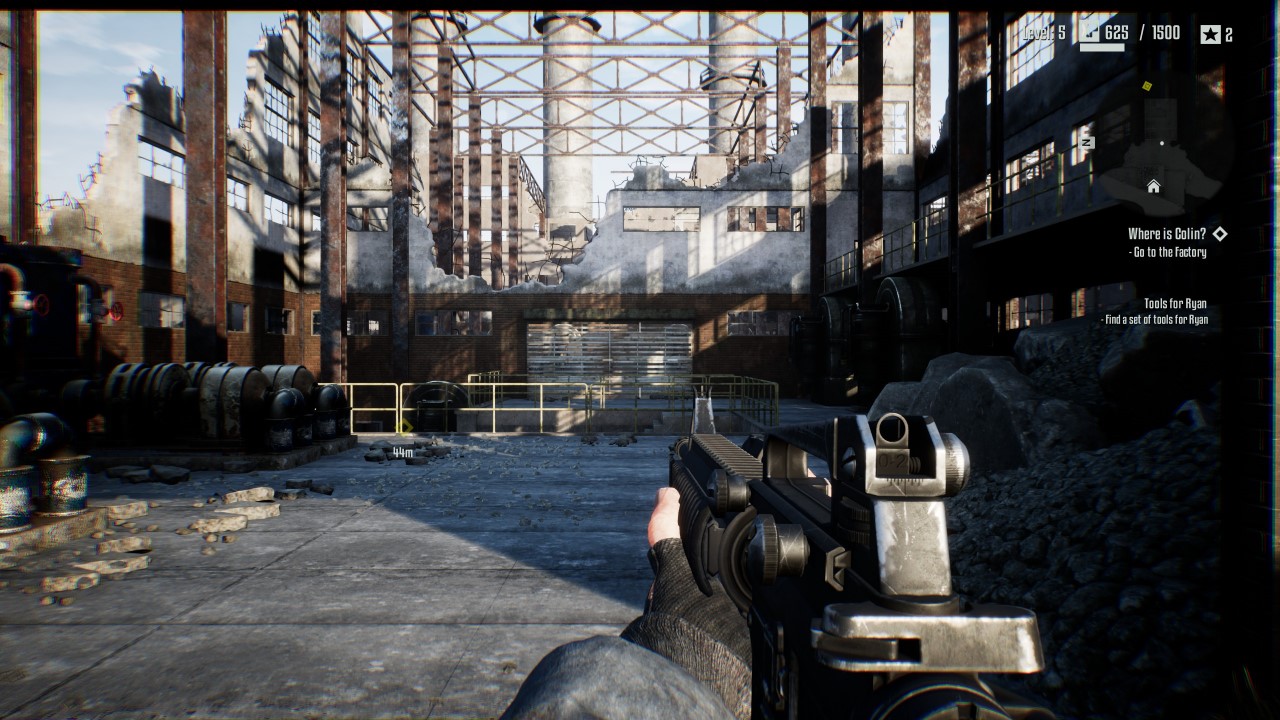 At Normal difficulty, Terminator: Resistance feels like a game from the late-2000s that traveled forward in time, adopting some “newer” ideas as it did. It’s largest crime – it’s greatest sin – is the fact that most of those systems don’t gel together and often prove inconsequential, negligible, or unbalanced.

Taken on its own terms, the game can be mildly entertaining, and despite the “meh” shooting, slip-shod diologue, and generic as Hell mission-design I found myself somewhat entertained at times. Granted, the vast majority of my time in Terminator: Resistance was spent under the thrall of boredom, but it has it moments. The game, ultimately, is functional. Maybe not entirely competent, but functional, which is more than I can say for some similar licensed titles.

It’s graphically dated, and the glare is grossly over-tuned, but it didn’t look terrible. It ran well enough, at that. There were a decent amount of graphic settings to tweak, and you can map two key-binds to an action. There was no FOV slider, but what was on offer here was more robust than some AAA titles on PC.

The more I played the game, the more I felt Terminator: Resistance would have been a good B-grade AA licensed game if it had launched in 2008. The balancing issues and AI would still need work, but this could have been an ideal low-budget guilty pleasure of a game. Parts of me felt damn near nostalgic when I re-framed my view of the game as such.

Unfortunately for Terminator: Resistance, it’s 2019, and it can’t help but feel like a relic from a distant time. It can be enjoyable if you set your expectations low enough, but objectively it’s asking too much for too little. The fact that it is functional means fans of the franchise may actually enjoy this game, but I’d advise them to at least wait on a sale.

Had Terminator: Resistance released in 2008 it may have been considered one of the better licensed games of its time, but we’ve come a long way in ten years. In 2019, with excellent licensed titles becoming more common, Terminator: Resistance is mediocre at best. Fans may like it, but they deserve better. Maybe they’ll get that game in an alternate future – who knows – but they certainly didn’t today.