The latest news in the world of video games at Attack of the Fanboy
January 10th, 2016 by Jason Eliason 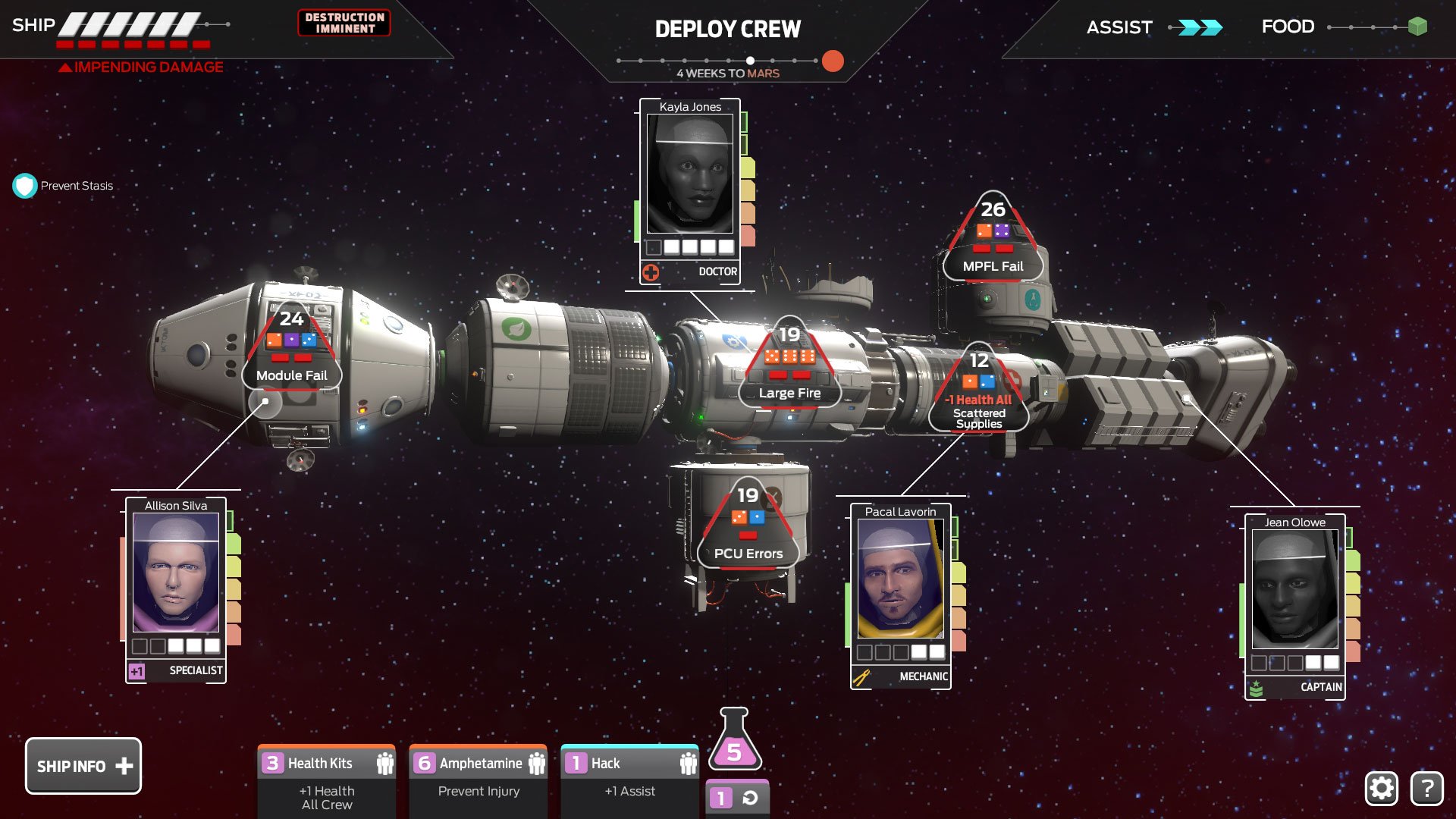 Four brave astronauts on a mission to discover the origin of a mysterious signal from Mars find themselves in a constant struggle to survive the brutal conditions of outer space.  The objective of Tharsis is to survive 10 weeks of relentless mechanical issues through dice rolls.  The game begins with each astronaut given a random amount of health and dice rolls, and immediately pits them against challenges often too difficult to be overcome right off the bat.  Depending on how lucky you are from the get-go, the game will often keep you teetering on the brink of life and death, and well fed with the flesh of your own failed crew members.

The core mechanics are fairly simple.  Rolling up to an event’s required number resolves said event, but rolling a number that matches any one of the randomly generated hazard die will trigger its respective negative effect.  Hazards include Injury, where a player takes damage; Stasis, where the dice is frozen and unable to be re-rolled; and Void, where the dice is removed from play entirely.  It soon becomes apparent that in order to avoid these Hazards it is important to keep yourself stalked with Assists.  Again, whether or not an Assist can be acquired relies entirely on the luck of the dice.

In Tharsis, players can pick and choose 4 out of a grand total of 9 characters.  Off the bat, players are only given the options of Doctor, Specialist, Mechanic and Captain.  The rest are unlocked after meeting a certain amount of objectives.  Each individual character possesses his/her own unique passive or active attributes.  For instance: Specialist Allison Silva has the passive trait of “+1 Re-roll”, essentially allowing her to roll dice 1 additional time.  Doctor Kayla Jones has “+1 Health to Crew in Module”, allowing her to exchange one dice with a value of 5 or 6 for a health increase of everyone in her section of the ship, herself included.  This is under the assumption that you have dice to spare, which is rarely the case as you edge your way towards the final few weeks to Mars. 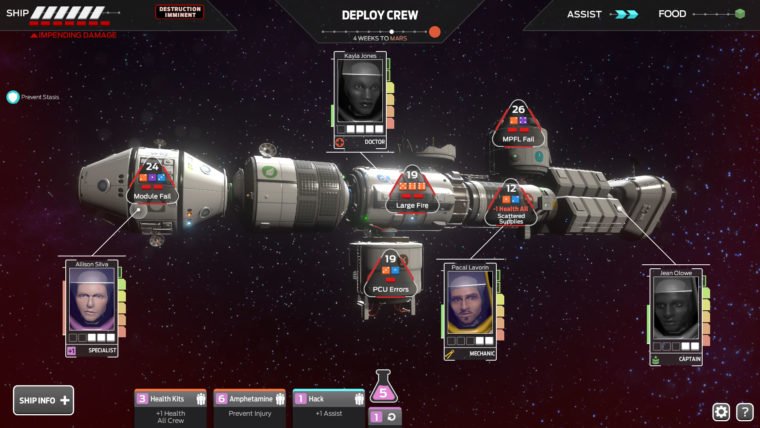 With little food, cannibalism soon becomes a necessary means of survival, as it increases the amount of dice each crew member can roll.  With the inevitable death of your crew, at least they can be good for something other than rolling ones and twos.  Once dead, crew members become your primary source of food unless you’re a goddamn Luck Dragon.  Consumption decreases a crew member’s maximum health and significantly raises stress, so eat responsibly.  Mysterious alien signals, cannibalism, dice rolls, ship repairs… what’s not to love: quite a bit, unfortunately.

It took a lot of time and patience to come to my final consensus for Tharsus.  It has enough content and features for someone to really sink their teeth into the game.  But the more I played, the more I felt as if I was playing wrong.  It was after rolling 5 injuries and ruining an otherwise perfect 9 weeks of survival that I put my controller down and decided that enough was enough.  If there’s one thing I cannot stand in video games, it’s losing for no apparent reason after investing time and effort.  It deeply saddens me to finally curse my dice rolling addiction and hereby announce that Tharsis is a stinker.  Here’s why:

What I’ve discovered with Tharsis is that the game wants you to lose.  Not just that, but it wants you to feel unlucky and cheated over and over.  Imagine if FTL: Faster Than Light was made so that you have to roll dice to accomplish literally everything.  On top of that, subtract the breaks in between “oh shit” moments.  This is Tharsis:  the Demon Souls of Yahtzee.  Sure, practice and strategy will carry you to the later stages of the game more consistently, but somewhere between weeks 6 and 9 some poor dice roll can inevitably end your streak. 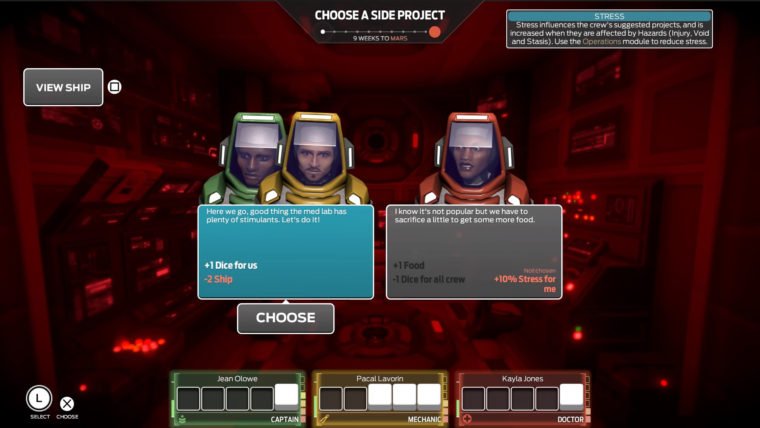 With that said, here are a few helpful tips and tricks for successfully completing Tharsis:

Ultimately, I felt as if I wasn’t given enough control over the game to really hone in on a decent strategy.

It isn’t the mechanics of Tharsis that put me off to the game.  It’s that the sheer amount of luck necessary to progress felt like laziness disguised as a challenge.  The many different character traits, as well as the benefits of each room would make for an excellent strategy.  Unfortunately, not much effort can be spared to reap these rewards as in most cases I couldn’t even roll high enough to complete my current events. Ultimately, I felt as if I wasn’t given enough control over the game to really hone in on a decent strategy.  I decided early on to take different approaches to the way I played the game, in hopes of more fruitful results.  With each failure I grew less enthusiastic and gave in to mindlessly, unsuccessfully throwing dice.  What sucked was that a mind-numbingly simple play through, with luck, yielded a more successful campaign that some of my most well thought out attempts. 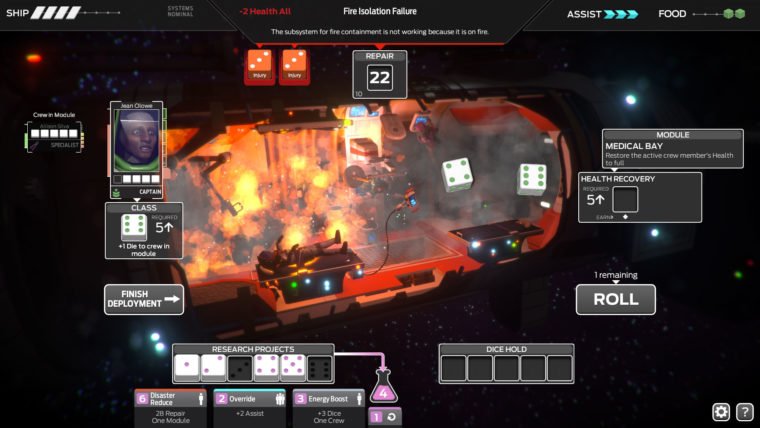 Tharsis offers a wide variety of tools to utilize as you scramble to repair your ship.  Unfortunately every action requires a moderate to significant amount of luck, punishing even the most advanced and well thought out strategies with failure.  Though the mechanics of Tharsis are often exciting and suspenseful, the game ultimately falls short of expectations due to irredeemably punishing dice rolls.