The latest news in the world of video games at Attack of the Fanboy
March 6th, 2020 by Diego Perez 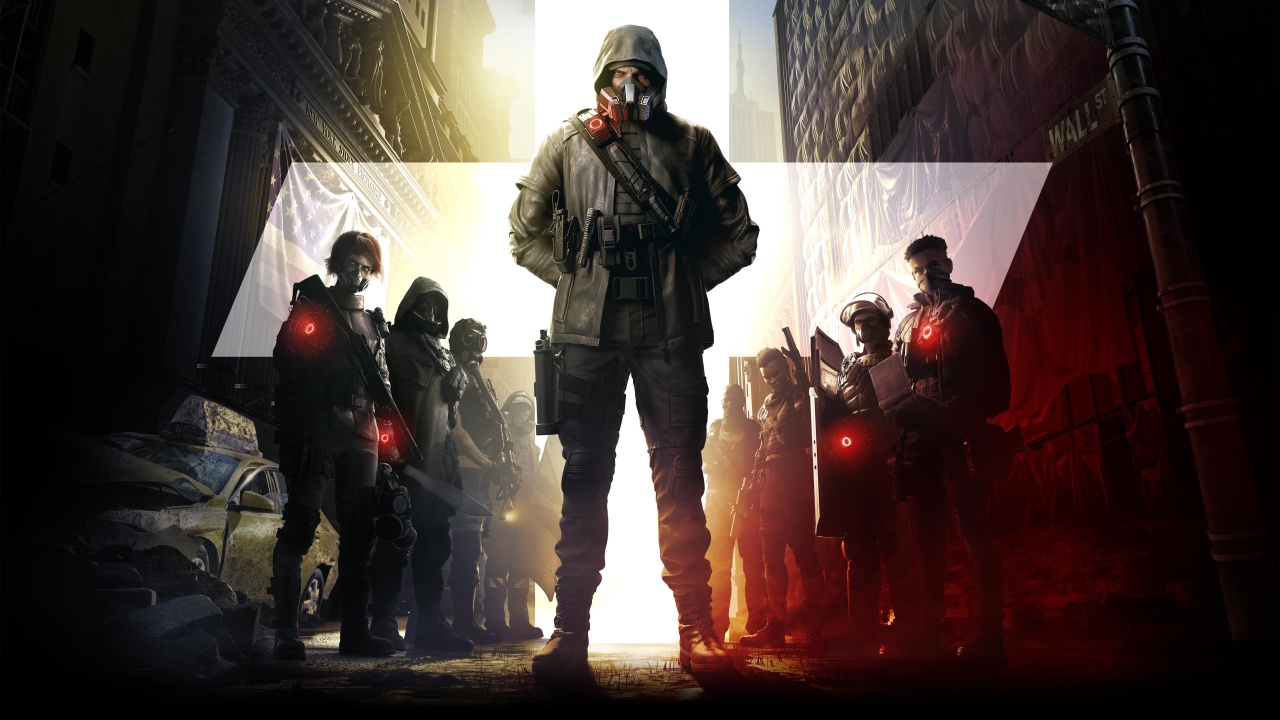 Following its launch last year, The Division 2 fell off pretty hard. If you weren’t into the game’s number-crunching, min-maxing, build-focused endgame, you likely didn’t stick around for any of the DLC episodes. Now, like so many other live service games that have come before it, The Division 2’s latest expansion serves as a sort of second launch, breathing new life into the game and streamlining its many systems for new players. So, does Warlords of New York succeed in elevating The Division 2 to the next level like Forsaken did for Destiny 2? Well, no, but that doesn’t mean it’s all bad.

To put it simply, if you weren’t into The Division before now, Warlords of New York has nothing to offer you. The story, centered around taking down a rogue First Wave Division agent named Aaron Keener, is paper-thin and serves as a lackluster conclusion to a plot thread that’s been dangling over Division players since the first game. The missions, while entertaining, are the same gauntlets of faceless goons with colored health bars. The characters, as always, might as well be cardboard cutouts. Warlords of New York is just more Division, and while that may sound appealing to some, there’s little here to entice new or lapsed players to return to the rundown streets of New York. 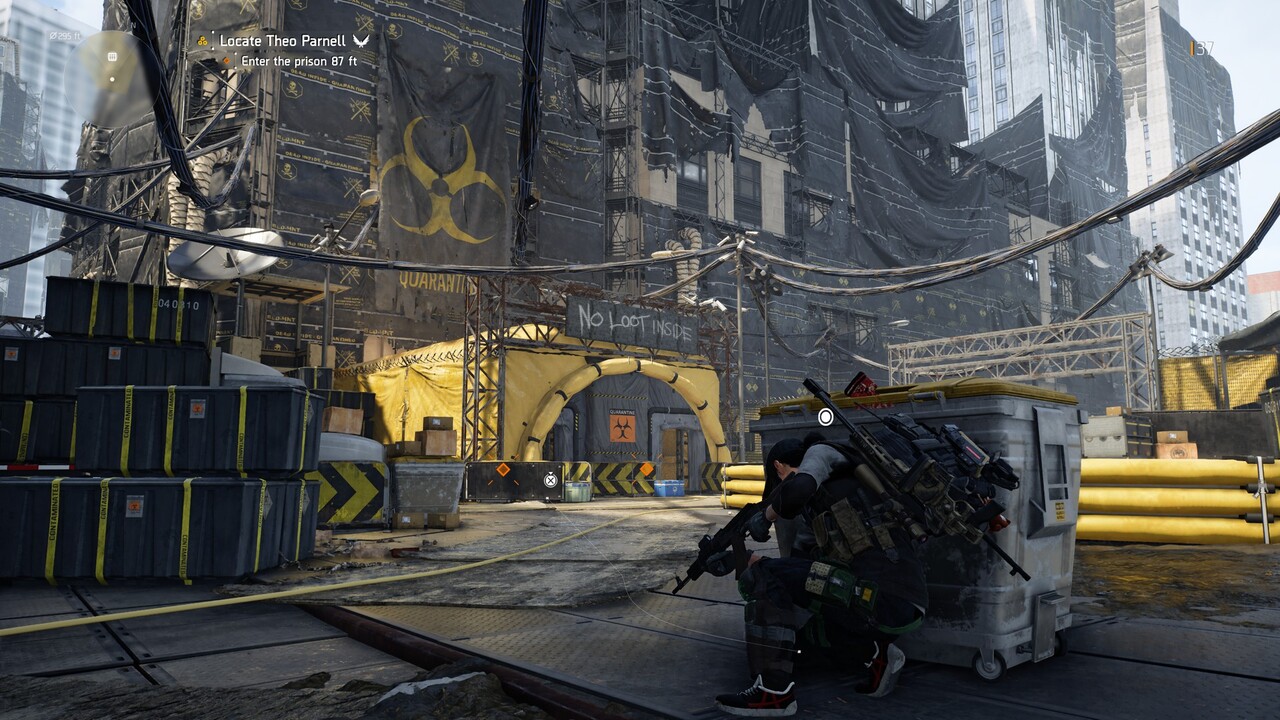 That being said, Warlords of New York makes several changes to the game’s many systems and adds a considerable chunk of content in the form of a new campaign, and dedicated Division players are sure to appreciate all the new additions and tweaks. After completing the game’s main campaign and reaching World Tier 5, players will be able to take a helicopter from D.C. to New York in order to take part in a manhunt for Aaron Keener. This version of New York is very different from the snowy stomping grounds of the first Division game, though. On top of suffering the effects of the Dollar Flu for the past eight months, Lower Manhattan has also been ravaged by a hurricane, leaving it in a state of ruin. The playable section of Manhattan was also originally quarantined as a Dark Zone, meaning it saw the brunt of the infection during the initial outbreak. As such, Lower Manhattan feels noticeably more hopeless and desolate than the sun-soaked streets of summertime Washington, D.C.

Like any Division content, the setting is the highlight of the experience here. Never before has ruin and rubble looked so beautiful. The base game looked great when it launched early last year, but the looming skyscrapers and claustrophobic alleys give New York a completely different vibe and aesthetic than D.C. There is an immense amount of detail, and it’s all tightly packed together due to the cramped nature of the urban environment, breathing life into every square inch of Lower Manhattan (in a bleak and lifeless sort of way). Even the primary settlement for the expansion, a community called Haven, doesn’t feel as warm or inviting as D.C. staples like The Campus. While D.C.’s citizens were rebuilding and somewhat managing to get things back under control, New York’s inhabitants are struggling just to survive, and that fact can be felt on every street corner.

As you make your way through the rundown streets of Lower Manhattan, you’ll take on several new missions, although this time around, things are a bit different. Warlords of New York flirts with the idea of a nonlinear campaign, presenting you with a map covered with “fog of war” and only drawing your attention to four leads that may contain information as to the whereabouts of Keener or his lieutenants. As you make your way from lead to lead, a progress bar will fill up, bringing you one step closer to determining Keener’s location so you can end things once and for all. Each initial lead will take you through a quest line relating to one of Keener’s lieutenants, culminating in a boss battle that rewards a fancy new gadget. Unfortunately, this nonlinearity is only skin deep, as there isn’t any way to break the intended sequence of events or have any input in the way things go down. The only choice you have to make is which lieutenant to go after first. It’s a bit of a missed opportunity, especially with how interesting things could have been if each lead were to give a hint as to where a lieutenant was located rather than just leading players through a gauntlet of linear missions. 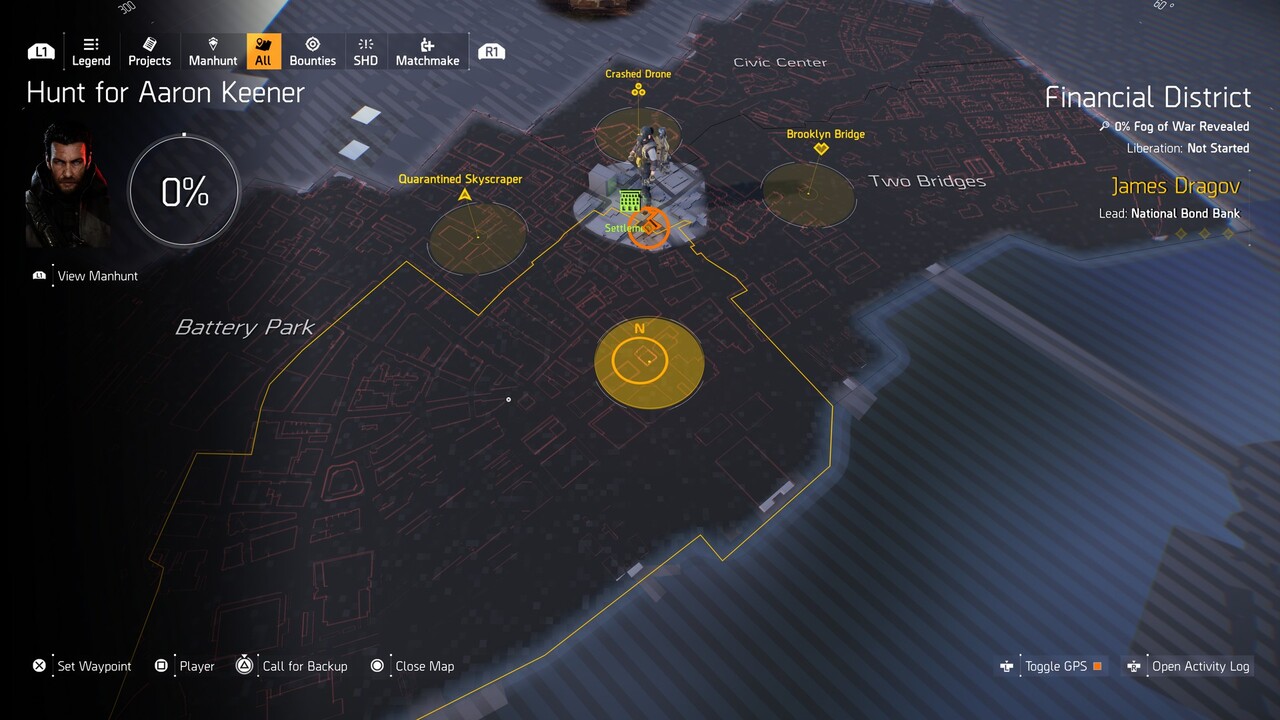 The missions themselves, though, are typical Division fare. It’s a whole bunch of large, open rooms or expansive outdoor areas filled with hordes of enemies to shoot, interspersed with bouts of defending a point or hacking something. The boss battles are the only highlight, but even then they serve merely as demonstrations of the new gadgets you’ll earn rather than interesting combat encounters. There are a few standouts, though, like the fight with Theo Parnell, who employs decoys to make it appear as if he is in several places at once. Still, these truly great moments are too few and far in between, leaving most of Warlords of New York’s gameplay feeling like just going through the motions all over again. There are some new enemy archetypes to spice things up, but the game just throws so many enemies at you that even these new foes start to lose their shine after only a few combat encounters.

Each of Keener’s rogue agents carries a unique gadget, and defeating them will unlock that gadget for your own personal use. There are four new gadgets to earn in Warlords of New York, but none of them feel particularly groundbreaking. The decoy gadget is easily the most interesting of the bunch, but the shock trap, sticky bomb, and incendiary sticky bomb are lackluster compared to the rest of the SHD tech arsenal.

While the shooting and looting are definitely the core of the experience, Warlords of New York’s story is also a focal point. Aaron Keener has been a central villain in The Division since the first game, and this expansion was touted as the conclusion to Keener’s story. Unfortunately, the Warlords of New York storyline feels like a huge missed opportunity. In typical Division fashion, most of the narrative information is delivered through audio logs and ECHOs that are found throughout the world. These logs provide context and reasoning behind each rogue agent’s motivations for disavowing the Division, and they raise some interesting questions in the process. However, any semblance of an interesting story is tossed out the window by the end of the campaign. In an attempt to create morally gray, multidimensional characters, the game attempts to show that the rogue agents may have a point and that the Division might not be completely in the right. However, these attempts come off as forgettable and disappointing when they’re immediately dismissed and written off as the conjecture of crazy people. The Division universe is ripe with potential for great stories, but Warlords of New York absolutely fumbles when it comes to creating memorable characters or a compelling plot. Each of the expansion’s antagonists, including Keener, don’t get enough screentime to shine, and they’re painted as cartoon villains during any interactions they have with the player. 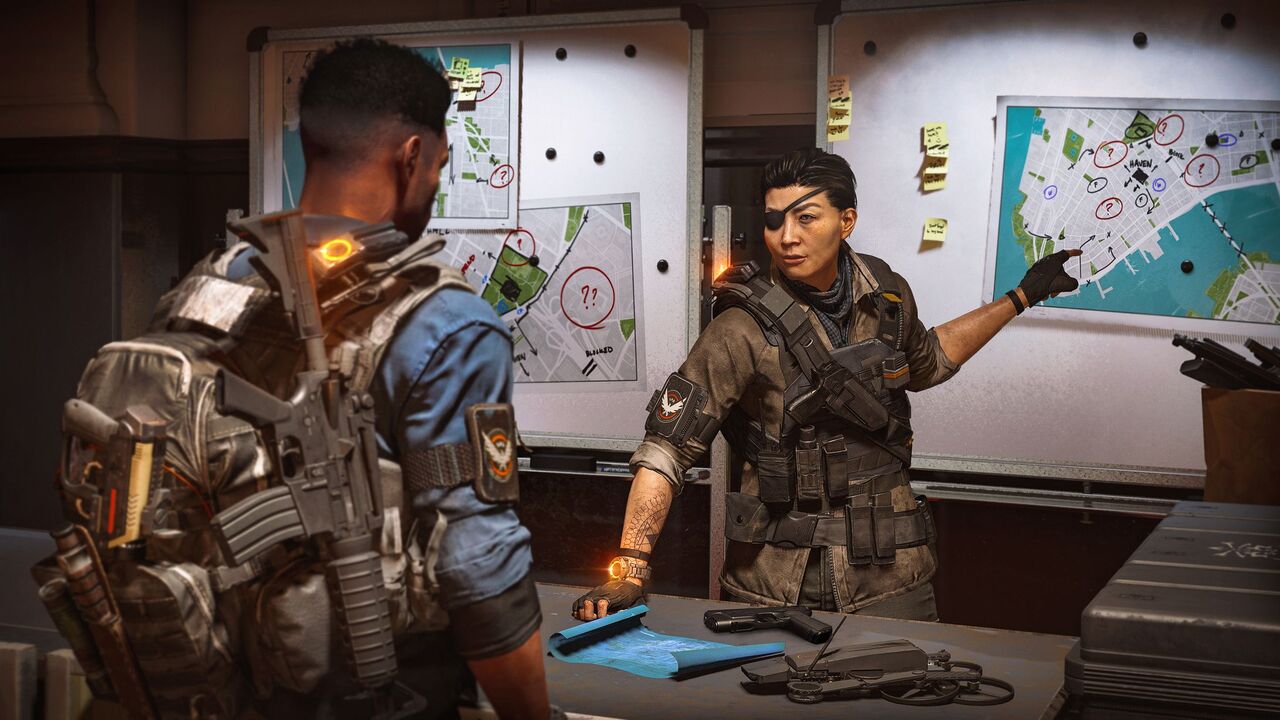 The gameplay is the primary focus of The Division 2, though, and Warlords of New York has made strides in streamlining The Division 2’s gear and weapons to make things much more clear and understandable. Several significant changes have been made to gear stats in order to make each stat matter, and skill power has been replaced with skill tiers, which are a much more intuitive way to improve skills. There are also tons of other changes, like gear talents now only being available on backpacks and chest armor, that make building a character to your exact specifications easier than ever before. On top of these changes, the inventory UI has seen multiple tweaks to make information easier to understand.

After wrapping up the Warlords of New York campaign, you’ll be treated to the new endgame systems added to the game with the latest update. The Dark Zone has been revamped to make it a much more appealing option for endgame players. SHD Levels offer an infinite progression system allowing you to fine-tune your agent further and further. The addition of global difficulty settings now lets you increase difficulty across the board, allowing you to tackle open-world activities like control points on harder difficulties for better rewards. Gameplay modifiers called Directives can be turned on for missions, increasing XP rewards at the cost of added difficulty. Finally, legendary difficulty has been added for select stronghold missions in D.C., and these missions feature the toughest enemies in the game: an elite sub-faction of Black Tusk mercenaries. These new, challenging features will keep veteran Division 2 players busy for quite some time, and future content, like the addition of seasons and battle passes, will hopefully add even more incentive to keep playing long term. 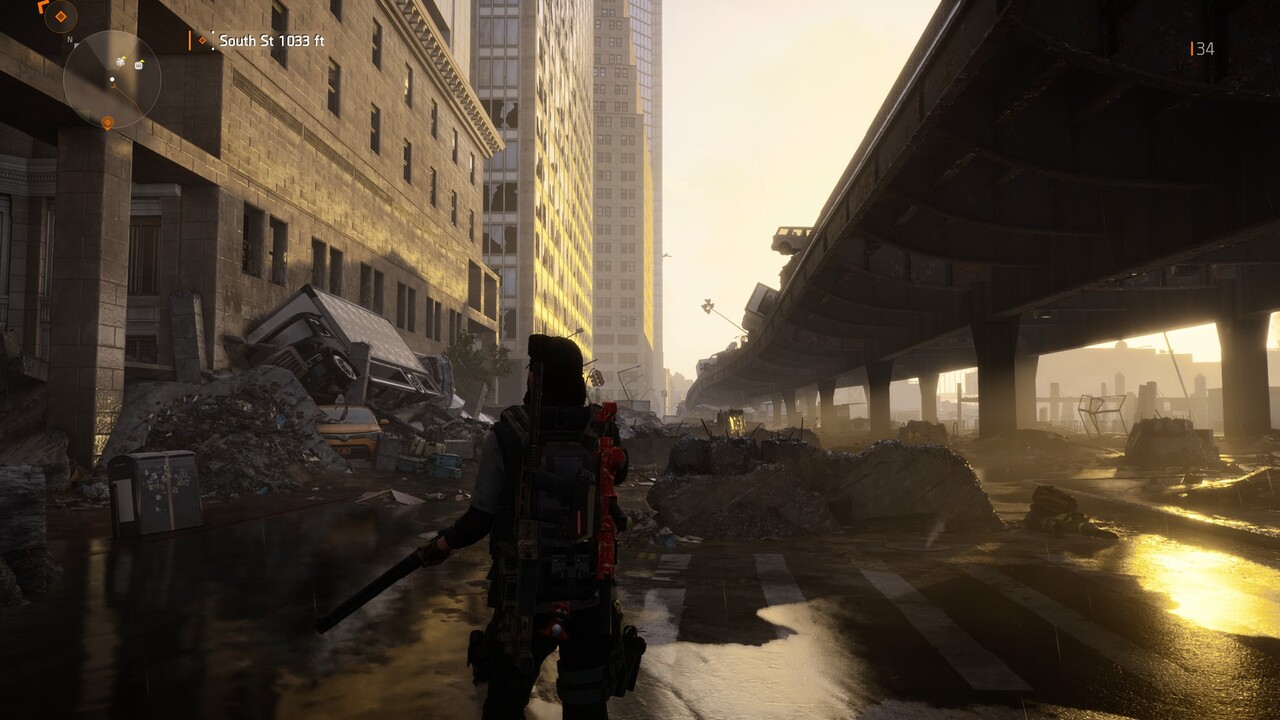 All in all, The Division 2: Warlords of New York is just more Division. Rather than a game-changing expansion, Warlords of New York merely feels like an extension of The Division 2’s main campaign. The storyline is weak and the missions are samey, but the gameplay changes brought along with the expansion are sure to satisfy veteran players. The endgame has been totally revamped, providing plenty of incentive for existing players to keep grinding away, but there’s practically nothing in Warlords of New York that will entice new players to jump into The Division 2, even with the promise of regular future content. It’s fun, but ultimately forgettable, doing very little to draw in new blood when compared to other live service looter shooters on the market.

The Division 2: Warlords of New York

The Division 2: Warlords of New York
You May Like