Everything Telltale's The Walking Dead, all in one place. Few would have guessed at how impactful Telltale’s The Walking Dead would end up being. The franchise was just beginning to show its strength in 2012 when Telltale released what would go on to win hundreds of Game of the Year awards and help shape indie gaming for years to come. The journey wasn’t perfect, with some side adventures that didn’t pay off as well as anticipated, but the core story of Clementine and her growth as a character has cemented this series as one of gaming’s best stories. And now it’s all been upgraded and put together in one simple package in the form of The Walking Dead: The Telltale Definitive Series.

Little else needs to be said about the story contained in The Walking Dead: The Telltale Definitive Series. Starting with the first season and its introduction of Clementine, fans have adored the tale told here, despite some bumpy episodes or diversions. Each season offers something unique, whether it’s the surrogate father/daughter relationship between Lee and Clem; watching Clem grow into a formidable survivor and leader; or introducing new characters and adventures outside of Clem’s immediate circle. While some of the middle or later seasons might struggle to maintain the top tier storytelling of the original, this entire 50+ hour journey is easily one of gaming’s biggest and best. 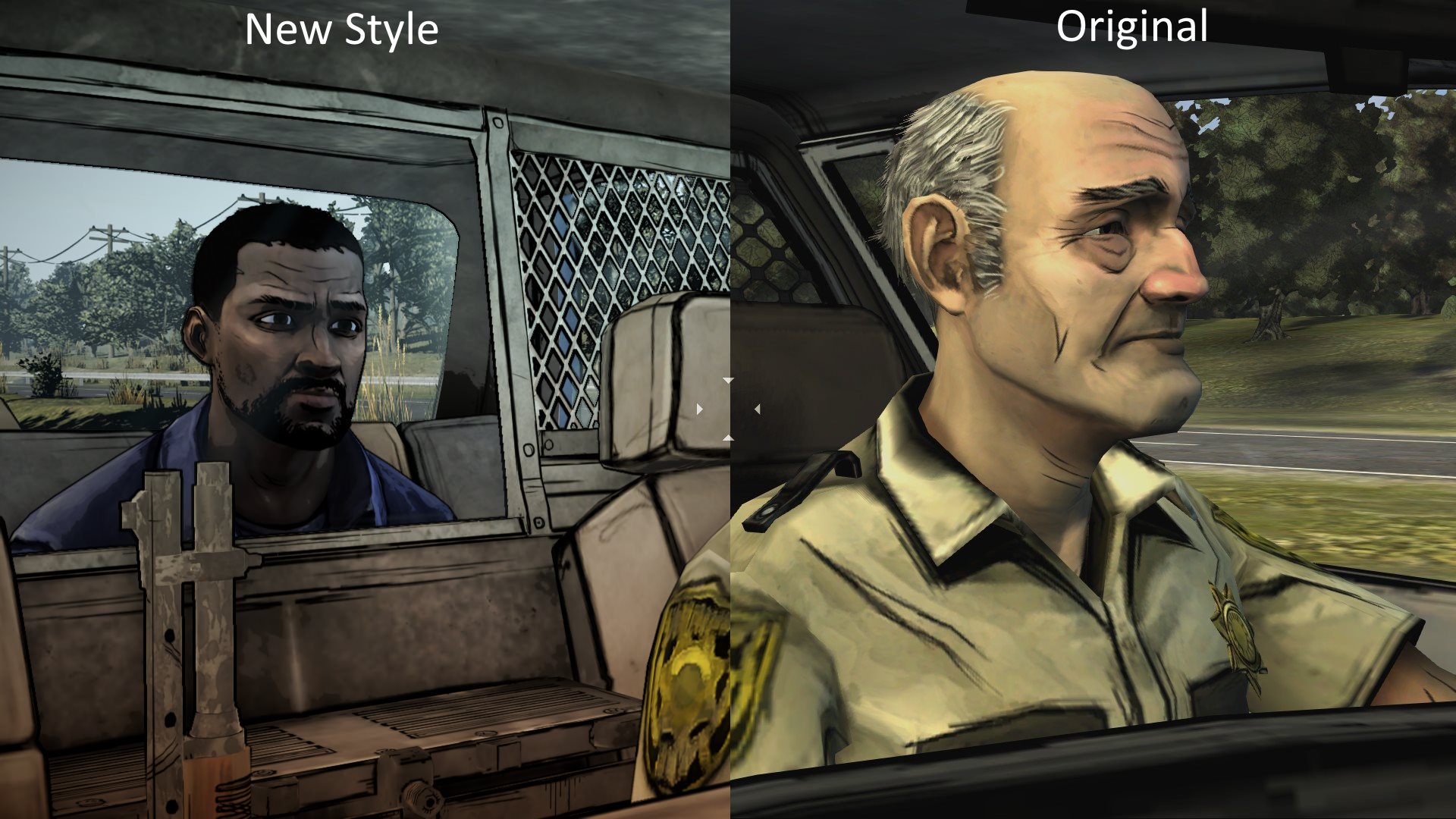 As the name suggests, this collection combines pretty much every piece of available content for Telltale’s long running The Walking Dead series. There’s all four main seasons, the 400 Days DLC, and the limited Michonne series as well. That alone should make this worth it for anyone who hasn’t picked up the series before, as it combines one of the greatest narrative games of all time with all of its debatably amazing sequels and the ancillary content that surrounds it. But Skybound, who rescued the series when Telltale suddenly went under only halfway through the Final Season, has gone beyond just collecting things into an easily digestible package.

Basically, if there’s a piece of content out there for Telltale’s The Walking Dead series, you’ll probably find it here.

They’ve also improved and enhanced the experience, even going back to rework some aspects of the original season. Adding in The Final Season’s “Graphic Black” art style over top of the already upgraded visuals from the last collection release by Telltale, every piece of The Walking Dead content now features a similar visual template. This helps unify the experience overall, with less jarring transitions between each season. However, if you weren’t a fan of the art style to begin with, it could feel like a downgrade of sorts. As a longtime fan of the series who thoroughly enjoyed the visuals of The Final Season, it’s a big improvement for me, except for a few scenes that end up looking overly dark at times. It would have been nice to have this as a toggle option, but most players will either appreciate the change or not notice it.

Along with visual upgrades the team at Skybound has made some small under-the-hood changes as well. Without putting the entire series side-by-side for comparison it’s tough to pinpoint, but overall there are fewer glitches and animation issues, including lip syncing. Finally The Walking Dead: The Telltale Definitive Series release secures it’s “definitive” title by including tons of behind-the-scenes features that include massive, movie length developer commentary on various episodes, a character model viewer, art gallery, and a music player with over 40 tracks for fans to enjoy. Basically, if there’s a piece of content out there for Telltale’s The Walking Dead series, you’ll probably find it here.

All of these games are combined together via the Definitive Edition menu interface, where you can launch into any of the previous releases with relative ease. Each game retains it’s own original menu, music, and settings, giving you a more preserved experience than you might anticipate going in. It gives the collection more of a museum-style feeling rather than something that is trying to remake/remaster the originals. This does lead to some extra loading time at the start, and can be a bit confusing, especially when it comes to jumping between titles at will. And there currently doesn’t appear to be an official way to bring saves over from those initial releases, possibly forcing players to start from the beginning, rather than carry over the story and characters they’ve put so much time into. 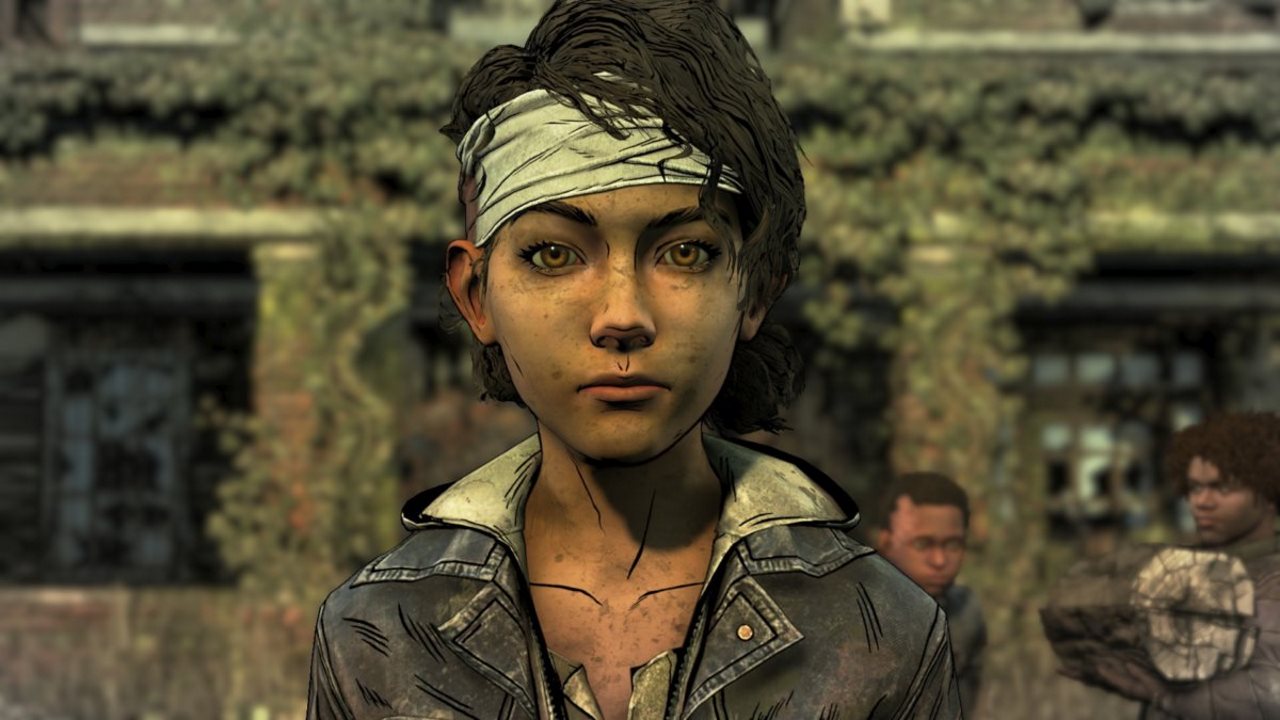 With any release like this there are two main audiences: new players and avid fans. The former will find this to truly be the “definitive” release of all of Telltale’s Walking Dead titles. It’s the most uniform thanks to the retroactively added Graphic Black art style. It’s the most stable thanks to gameplay and visual improvements. And it’s simply an amazing value overall with the massive amount of content thrown together for this release. Avid fans have a slightly tougher calculation on their hands though.

The improvements are certainly worth checking out, and all of the behind-the-scenes additions might be worth the price alone. However, the audio commentaries feature a pretty bare-bones video player that you’ll struggle with quite a bit. Improvements were promised for this though, so watch for updates closer to or after release. The real thing that The Walking Dead: The Telltale Definitive Series provides for those who have religiously followed the series is an updated and easy way to snatch up every single piece of TWD content, and in that regard it succeeds quite well. And if you’re looking to replay the series, this is clearly the best way to do it. Though it would have been nice if there was an easy way to jump right to whatever season you may want, with the same continuous save file you would like to use.

The Walking Dead: The Telltale Definitive Series combines some of the best stories that video games have to offer all in one enhanced and improved package. This massive collection of all things Telltale’s The Walking Dead is the perfect place to start your journey with Clementine and the universe that she inhabits. Longtime fans have a tougher decision on their hands, but the added content and updated visual style should help assuage any doubts. While the series may not have maintained the near-perfection of the first season, this is  one of gaming’s greatest narrative adventures, full of drama and character that will linger with you long after the credits roll on the Final Season.