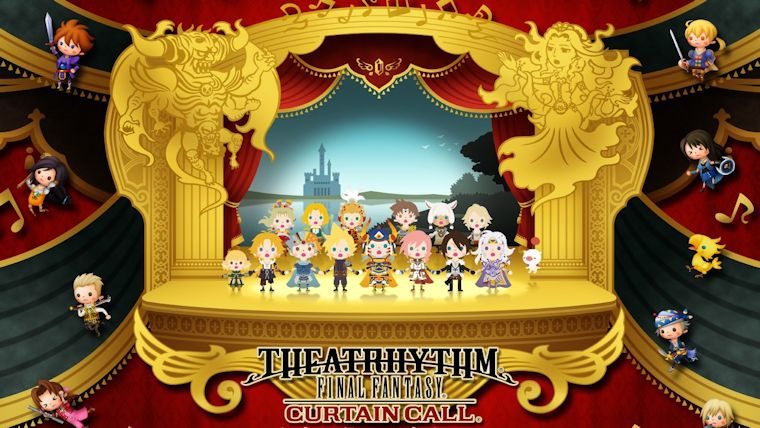 The Final Fantasy series has been around for over 25 years, debuting in Japan back in 1987 before arriving in the US in 1990. In that time, the series has brought us a lot of games, including plenty of mainline titles as well as spinoffs. Throughout these wide range of games, we’ve been treated to amazing soundtrack after amazing soundtrack, with a large majority coming from Nobuo Uematsu. I know I’ve spent countless hours listening to the various soundtracks from across the series, so Theatrhythm Final Fantasy was a match made in heaven when it released on the 3DS a couple years. Now, indieszero and Square Enix have teamed up once again for an even grander sequel known as Theatrhythm Final Fantasy: Curtain Call.

When you first start the game, you will be very limited in what you can do. First, you must choose a party of four characters from past Final Fantasy games from a somewhat small list. I personally chose Tidus, Tifa #2, Serah, and Squall. Literally, there is one option to try out at this point, the Music Stage mode. Based on the characters you choose for your party, you will have only a few songs in which to choose that come from the games of the characters in your party. This is the time where you will learn the ropes of the game, including the controls and such.

Theatrhythm Final Fantasy: Curtain Call features two different control schemes that you can try out at this time, one involving the circle pad and face buttons while the other is done exclusively with the touchscreen. Being a big fan of rhythm games like Rock Band and Guitar Hero, I’m pretty partial to physical buttons, so I went with that scheme, but both work very well and it’s mostly just a personal preference decision that you will have to figure out for yourselves. The controls are incredibly responsive, which is extremely important in a game that requires the level of precision as Theatrhythm Final Fantasy: Curtain Call.

Just like the original Theatrhythm Final Fantasy game, this one features a few different music types to play, including Battle Music, Field Music, and Event Music. Battle Music looks the most like classic Final Fantasy turn based action with your four players lined up each in front of a row of notes that will come their way. You must hit A, hold A, or hit the corresponding directional location on the circle pad as they are lined up on each row. 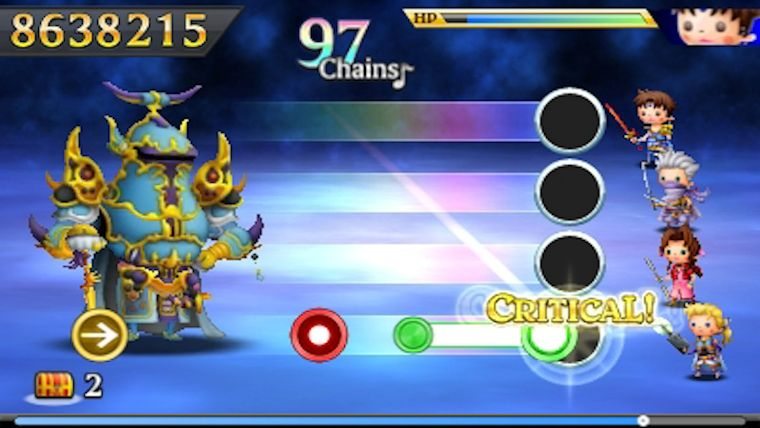 Field Music is quite different as you only has one row of notes to worry about, but they move up and down the screen and often have to be controlled with the circle pad when holding down A. Otherwise, the notes and such are the same. This is overall the most common music type you will come across in the game.

Event Music is the most uncommon of the group, with very few in the game, but it involves the playing over an actual cutscene from the Final Fantasy series, such as Final Fantasy X-2’s 1000 Words.  It plays a little differently, but is still rather similar for the most part. In fact, once you complete one of these you will unlock the video itself in Theater mode. The only nitpick I had with the Event Music was that a number of songs that were Event Music songs in the original game, including Suteki da ne (Isn’t It Wonderful?) were changed from Event Music songs to Field Music songs, so we miss out on the excellent cutscenes this time around.

As you complete songs in Music Stages mode, you will gradually unlock the rest of the game, which includes a number of other modes and features, such as Quest Medleys, Versus Mode, Museum, and more. In addition, at some point you will gain access to songs from all 25 Final Fantasy games that are represented this time around, rather than just the four based on your party members.

You can gain even more songs as you earn Rhythmia from beating songs, along with a number of other unlockables, including different chime sounds. The other big collectible in the game are the crystal shards. These crystals are split into different colors and can be found in a few different ways, such as beating a certain level in Quest Medleys or beating bosses. When a certain number of each are collected, you can unlock new characters that can be added to your party. This combined with earning Rhythmia adds a ton of replayability to the game, not to mention the number of songs you have at your disposal to avoid repetitiveness.

Specifically, Theatrhythm Final Fantasy: Curtain Call boasts a hefty roster of 221 different songs from across the Final Fantasy series when fully unlocked. In addition, there are also a good number of DLC songs you can choose to purchase as well. The game even includes music from Final Fantasy Type-0, which has not made its way to the US yet. Just about the only issue I found with the song selection was that the aforementioned 1000 Words only includes the Japanese version and not the English, at least that I could find in the game, which is something that I really wish had been included.

The sound quality of the songs found in the game are excellent, especially coming on the Nintendo 3DS. However, the chime music when hitting a note is way too high a lot of the time on the default setting. You can adjust it down from 4 to 1, but it still can be a little distracting within songs. It may have made it harder to time your notes, but I do wish there was a way to disable the chime sound completely so you could fully enjoy each song to the fullest.

While Music Stages mode is pretty simple with picking a song and playing, Quest Medleys mode is essentially the more in depth variation of this, where you go on quests of different lengths. Within these quests, you will come across the different kinds of music in very random placings. This allows for you to play a variety of different songs from games that you may not have chosen otherwise, while also giving you something to complete rather than just playing the individual songs. The RPG elements of the game are most useful here, but still seem just superfluous as a way to fit with the series. 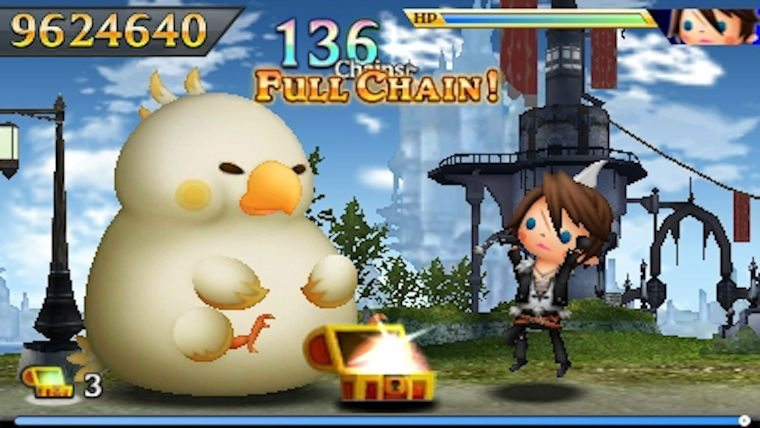 Versus Mode is also something that could easily provide you hours of playtime in the future. You can challenge the AI in battle, but also take on friends in local battles or even others through the use of online play. Playing against live players is great, but even the AI battles are extremely fun and satisfying as well.

Theatrhythm Final Fantasy: Curtain Call is truly a love letter to fans of the Final Fantasy franchise. Music has always played a major role in setting the atmosphere of each game and this allows you to experience more than 200 of them in one package. The gameplay is as great as the original, with the new Quest Medleys mode making the game even better this time around. If you are a fan of the Final Fantasy series and own a 3DS or just love a good rhythm game, this game is a must buy.