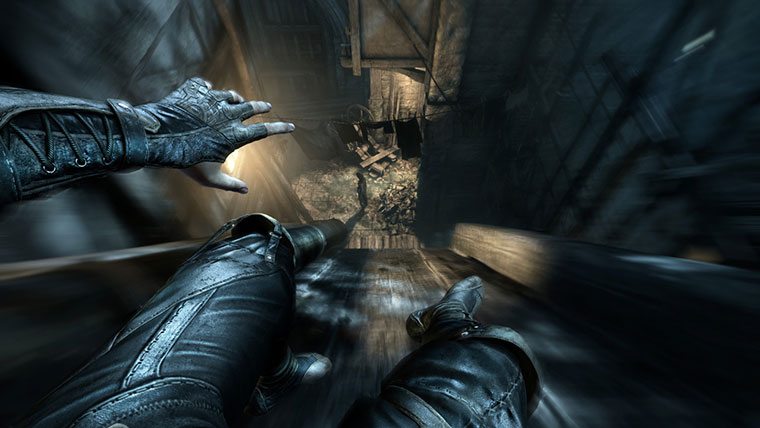 The box says Thief.  This is clearly Garrett.  There are some other recognizable bits that’ll stoke the flames of nostalgia for fans of the series,  but Eidos Montreal’s reboot of the Thief franchise has little else in common with the beloved games that have come before it.   Thief’s been dumbed down.  It’s been turned into a linear checkpoint to checkpoint game, with a myriad of gameplay ideas and progression elements that don’t form a cohesive and enjoyable experience.  Frankly, Thief is simply outclassed by other games in this genre, and feels like a project with both a vision much grander than was possible to execute.

After the success of Deus Ex: Human Revolution, Eidos Montreal working on rekindling another old franchise sounded like a great idea.  After all, they did a fantastic job with the Deus Ex series, re-igniting fan passion about an old franchise that had been dead for some time.   So what went wrong with Thief?   The core elements are all there.  There’s plenty of loot to steal.  There’s an interesting system of arrows, items and abilities that’ll help you pass through areas undetected (a pillar of the original games).  Sound still plays a large role in the game, and there’s a competent progression system which allows you tailor Garrett’s abilities to your liking, by collecting currency and trading it in for skill points.   It’s quite simple.  Thief isn’t as good as the sum of its parts, and it’s another game that tries to make itself accessible to more people, losing what made it special in the first place.

Thief is a constraining game that boxes players into a linear path  in both the gameplay and the story.  The game ushers players down this path, from cutscene to cutscene, rarely giving any room to experiment with different options in tackling an objective.  For many parts of the game, it feels like there are only one or two options to choose from when tasked with navigating to an objective.  It’s all so straight forward.  The developers seem to have thought out your plans ahead of you.  They leave you very little room to experiment or try different ideas — a design choice that really limits the desire to play any part of Thief more than once. We’ve added a gameplay video below that shows off one of the environments in the early part of the game in the default skill level.

Now, this is just the default skill level for Thief. Eidos Montreal has put in a lot of customization options when it comes to tailoring the Thief experience for different tastes.  The default settings are going to be pretty easy, and difficulty can be ratcheted up for a significantly greater challenge — all the way up to “Iron Man”, in which if you die or fail a mission, you have to start the game over completely.  These challenge mods and difficulty settings are very welcome additions to the game, and do go a long way in making the game more appealing to broad variety of tastes.  These difficulty settings should make Thief accessible to everyone, or at least that’s what appears to be the gameplan.  Though the underlying gameplay is problematic no matter what skill levels or customization options you play on.

Traditionally, the hook of a stealth game is freedom.  This freedom is what should hook players into playing and replaying a game.  Thief never quite hooks you with its core gameplay mechanics, due to the clearly laid out paths to your objectives, and laughably bad AI.    There’s just no clear rhyme or reason for AI not seeing you in plain sight, it makes the game’s many stealth segments seem elementary.  You can pick locks, open doors and the AI will simply allow you to go about your nefarious business.  Furthermore, you can be engaging in combat in close proximity to other guards, without raising any suspicion whatsoever.  No difficulty settings can make this element of the game more enjoyable. Following along with the general restraining theme of Thief, a lot of the traversal elements of the game are contextual.  Vertical movement is always tied to very specific points on a map.  Utilizing a tool to climb walls, only where the developer wants you to.  Jumping from ledges is also constrained to specific points, and there’s a mixture of short and high ledges, some which will require a button press to get down from.  The problem is, you just never know when you’re going to need a button press to move about.  It makes moving around the world a painstakingly slow experience — making you feel like the world’s most clumsy thief as you fall off a ledge unintentionally. 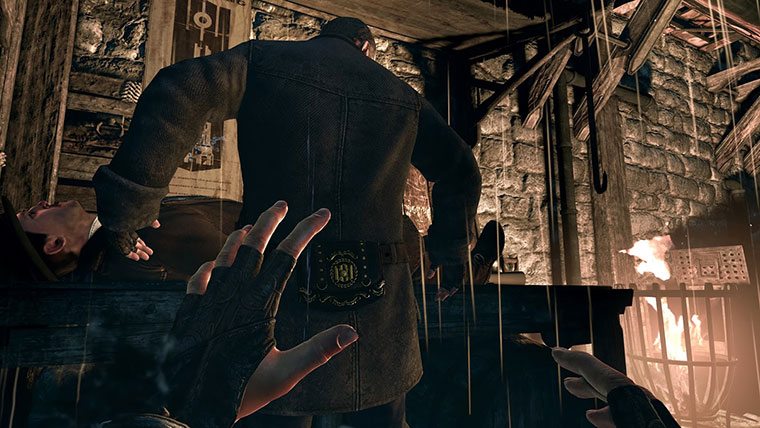 While we’re not going to delve into the story of Thief as far as criticism goes, enjoyment will vary by player, as in every game.  Though I don’t expect Thief to be showered with accolades come awards season when it comes to narrative.  What we will critize however, is the complete lack of any other story telling and world building that stretches beyond the game’s many cutscenes.  Driven by some horrible sound design, the content that should be building Thief’s story is essentially NPCs repeating the same dialogue over and over.  It gives the game a laughably computerized feel to it.  When an NPC or group of NPCs continually repeat the same lines of dialogue over and over, it really zaps any sense of immersion from the game.  If you watched the gameplay video above, it’s littered with instances of the same exact voice samples being used over and over again, and its consistent throughout this entire game.  These lines of dialogue feel like they are triggered when you are on certain parts of the map or performing certain actions, and some variety in this aspect of the game could have gone a long way. 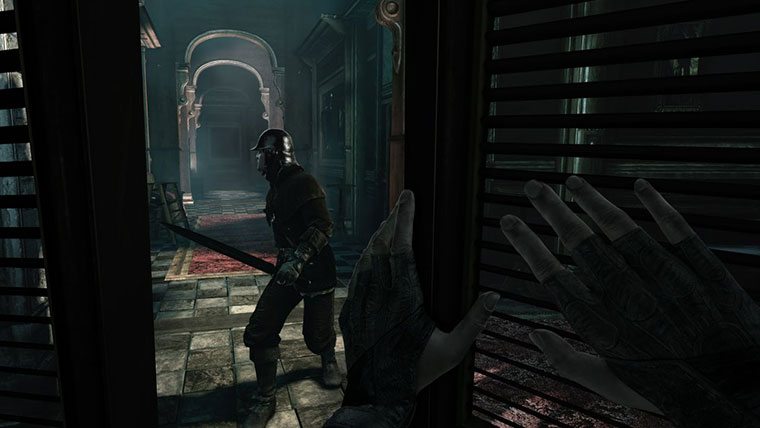 Bringing  it all together is Thief’s progression system, which is directly tied to the frequency of the items that you loot in the world.  The premise is simple.  Loot items are assigned variable gold values, and this gold can be used to purchase items like arrows and  other usables which are carried into each mission.  Depending on how you want to tackle an objective, you’ll want to stock up on different types of equipment.  Extinguishing light sources with water arrows or igniting fuel sources with flame arrows are two commonly used ways to manipulate the AI away from your chosen path.   This currency can also be donated to the Queen of Beggars for power-ups that are used for bettering Garrett’s abilities.  And while this system isn’t bad in making the loot relevant in Thief, it’s not entirely essential when progressing your character, as you’ll be afforded other XP opportunities along the way.  These come in the form of end of chapter bonuses, and  in the form of side missions. The actual side mission content feels more like Thief than anything.  You won’t be forced to take on this additional content, but Eidos Montreal definitely should have made at least one of these missions obligatory to let players know they exist.  They actually flesh out the game in meaningful ways, allowing players to scoop up loot and explore the city more thoroughly.  When not following the clearly laid out objective markers of the main storyline, the city can be a bit confusing to navigate — this will be something that Thief players of old will recognize as familiar.  You’ll need to do ample exploring to really get a grasp on the ins and outs of the many different areas.  This is also where the stealth elements feel the strongest, avoiding guard patrols as you make your way to various side missions.  You can take on multiple missions at once, and complete them at your leisure.  Unfortunately, it’s not the game’s saving grace, either.  These spots still have the problems that you encounter in the main story missions, mainly with AI being somewhat ignorant and traversal being clumsy and slow.  But they do round out the experience somewhat, albeit in the disjointed fashion that the game seems to have been thrown together in.

Thief is a somewhat disappointing game, especially considering the resurgence in stealth games that we’ve seen over the last couple of years. It’s hard to overlook the game’s shortcomings in the face of these other games, and it’s even more disappointing when you consider that this will be the introduction of Thief to many new players.  Thief feels like a game that couldn’t even get the basics right, let alone offer anything new and interesting.  It will almost certainly be a let down for fans of the series, and new comers will likely expect much more from such a respected series and developer.