Those Who Remain Review

Something was lost in the darkness. 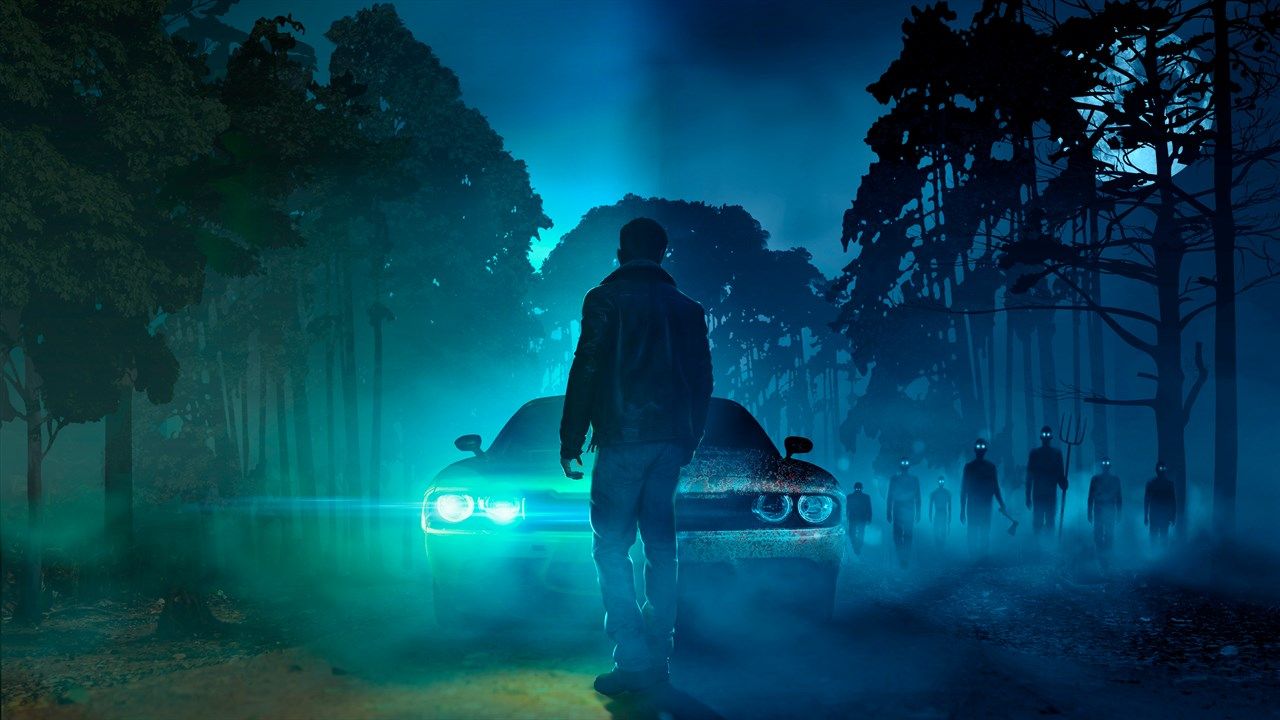 The horror game genre utilizes a vast array of different methods to evoke fear in the player. One of the most common methods is the usage of lighting, or really the lack thereof in many of the games. Most of the time it is as simple as putting the player in dark locations to where anything jumping out could surprise you. Developer Camel 101 decided to try something a little different with their latest game, where you must avoid the darkness at all times or face certain death in Those Who Remain.

Those Who Remain begins with protagonist Edward downing whiskey and heading to a mysterious motel to end an affair he has been having. Edward seemingly had a happy life with a wife and child, but everything started going downhill when he took a shortcut and got his family in a car accident that led to the death of his daughter. After a text message to meet at the motel, Edward sets off in what becomes a journey he most certainly did not expect. 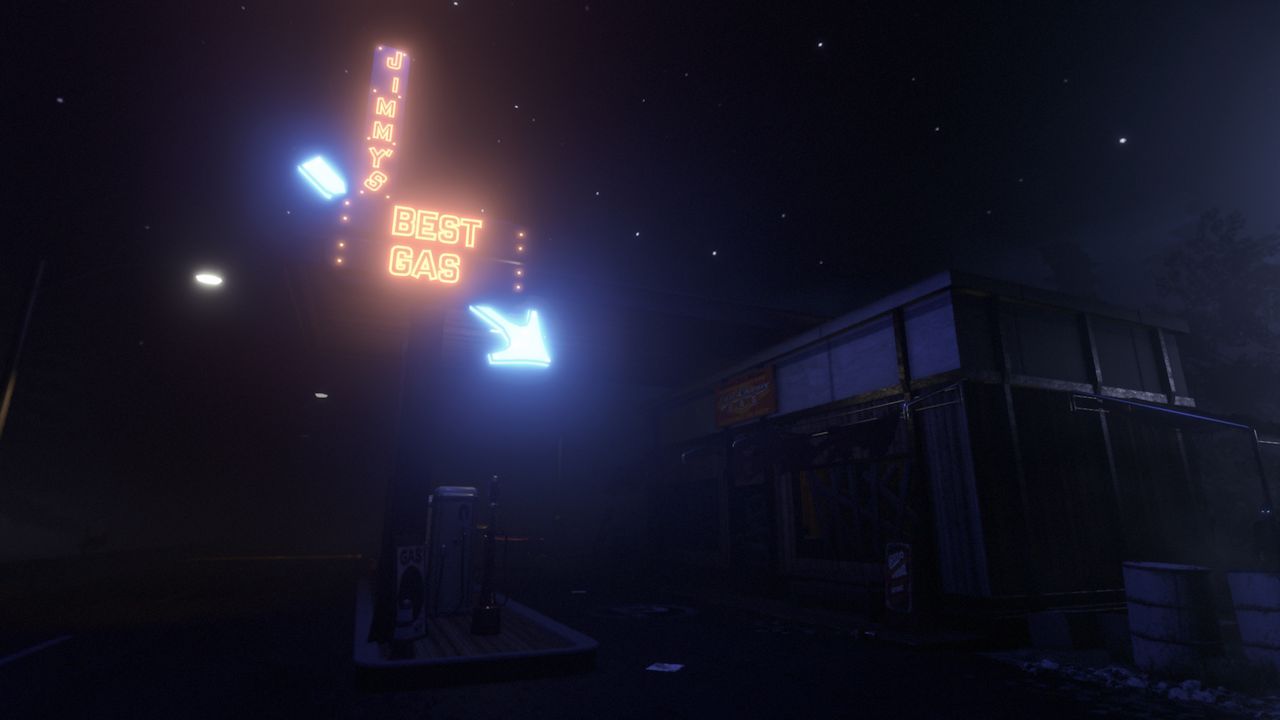 Soon after his arrival, his car is stolen and you give a quick chase before it disappears into the darkness. This is where things start to get intense, as you see someone on a light pole get snatched in the dark by something and then you quickly become surrounded by shadows in the darkness that all have shining eyes. Approaching any of these creatures will be an instant death for Edward, which becomes the overall premise of the game moving forward.

At this point, Edward decides to try and head for the nearby town of Dormont, but that is much easier said than done. From here, you have to investigate your surroundings and solve various puzzles that will allow you to advance from place to place. A good majority of the time will have you searching inside buildings, whether it be a home, police station, or post office, where you have to be very careful. Anytime there is darkness means the shadow enemies are there, meaning the most significant task you must perform is turning on lights throughout each location. Most of the time this is as simple as flipping a light switch as soon as you enter a room, while other times it requires you to solve a puzzle of some sort. This may mean you need to find an item to gain access to the lights or have to do an actual puzzle itself to get them to activate. The main problem though is that these puzzles mostly feel unoriginal and fail to innovate at all across the entire game.

One of the more intriguing aspects of Those Who Remain is the other world you get to visit throughout, which is done by entering doorways filled with light. This will then take you to areas reminiscent of Stranger Things’ Upside Down, where objects will be floating in the air and there’s just a sense of dread everywhere. These areas also bring some of the most tense moments of the game, as there are some very creepy creatures lurking around that you have to do your best to avoid. One of these creatures is reoccurring during the game and requires you to constantly hide and peek around corners before making a move or else you are instantly dead. 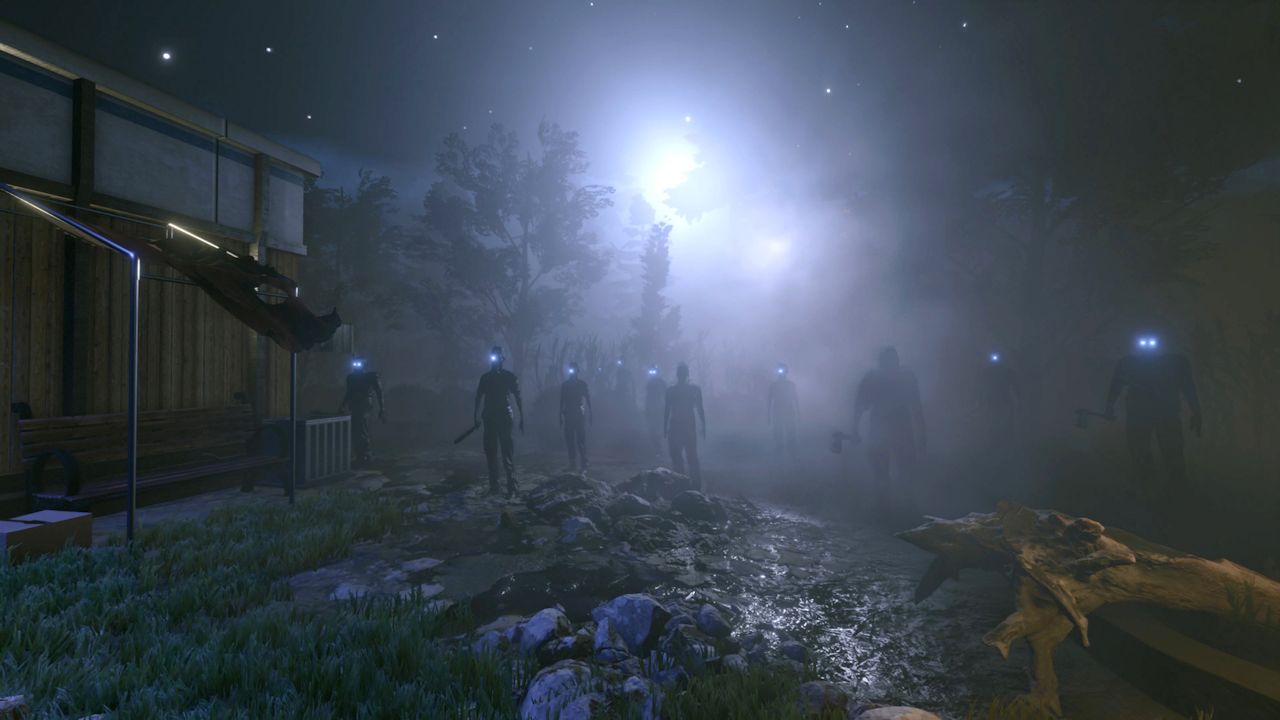 This starts to come into play around the time that you are introduced to the character of Annika, who you quickly learn died in what was ruled an accident. However, her death was much more than an accident as you will learn by discovering the circumstances surrounding it. There were three boys who bullied and pranked her that led to her death, which then led to their own form of coverups and such that you find about in each new location within Those Who Remain. For instance, you end up in the police station where one of the boy’s father worked and helped to cover up the incident. After making your way through each of these areas and collecting information explaining why each person involved did what they did, you are presented with the person directly in front of you and have the option to forgive them or condemn them to burn in Hell. On top of that, there are also a few other points in the game where you can either spare someone’s life or let them die, all of which come into play later in the game with the multiple endings.

As you’re investigating for information on how to advance in Those Who Remain, there are actually very few things you can pick up or interact with compared to how many objects that are sitting around. Instead, one of the only things that is consistent is the opening of most drawers and cabinets. This can get frustrating though, as it devolves into you literally doing nothing but opening and closing these drawers and cabinets to very rarely find something you need. You can’t not open them though, because there’s that chance it has something you need. It would have much better if the developer had implemented more interesting objects or lore during the game to where you would want to check every nook and cranny before advancing, but that is not the case here. 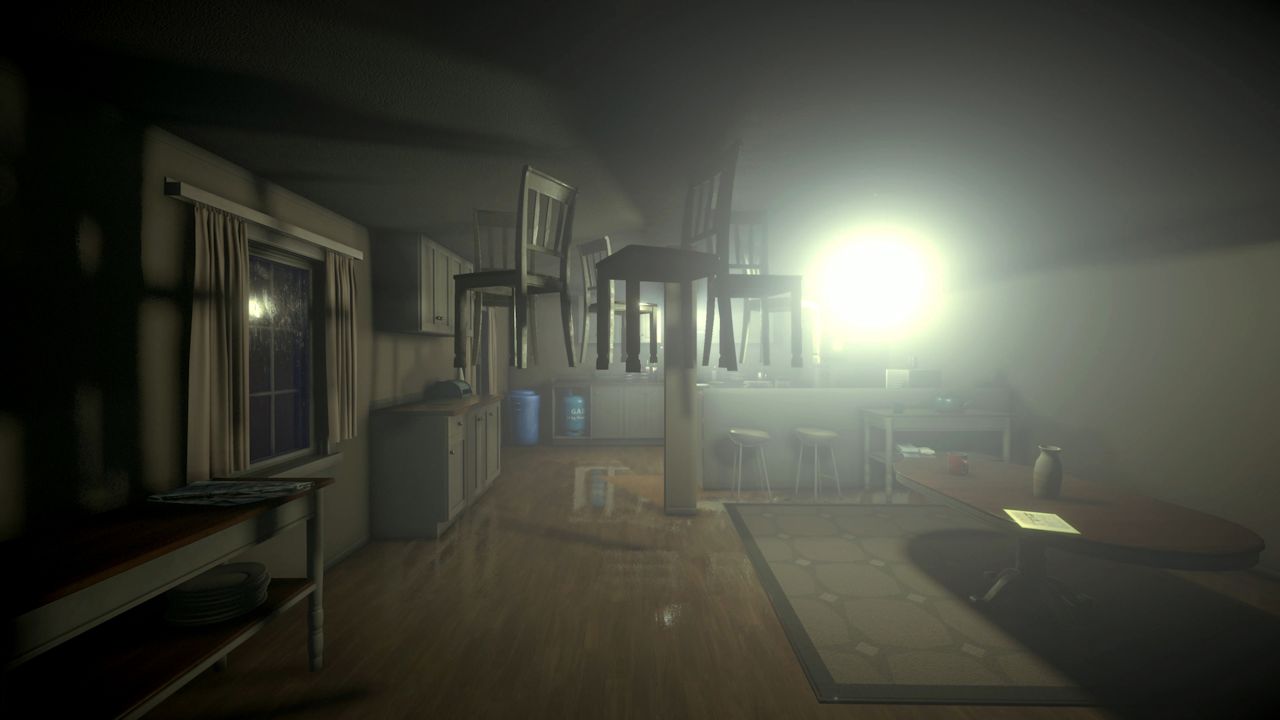 Even more frustrating than this though is the actual method of interacting with objects in the game. There is a small dot in the very center of the screen at all times, which you must aim onto the various objects in the game, whether that be a newspaper, door, or light switch. The problem that arises though is that the small hitbox for most items requires you to be incredibly precise with your movement when trying to interact. In a game like this, you should be able to select items much more easily than it is made here, making the game as a whole much more monotonous as you’re trying to grab everything you can.

While the setup of the game is very unsettling and creepy, the protagonist seems to be way too calm regarding what is happening most of the time. Within the first 10 minutes or so, he sees a worker on a light pole grabbed by something in the dark, sees crazy people in the darkness holding axes, and finds his car wrecked and on fire, but he can’t even let out any type of emotion whatsoever. Compare this to something like Resident Evil 7, where Ethan’s reactions help to add to the tension and atmosphere. Instead, Those Who Remain gives you a character that feels like he is going through the motions, when he most certainly shouldn’t be considering what is happening in the game. It gets worse when he actually does show some level of reaction to other situations that seem much more minuscule and normal, which makes zero sense. You don’t want to play as someone who is afraid of his own shadow, but you at least want to feel like you are playing as a real human character rather than a robot. 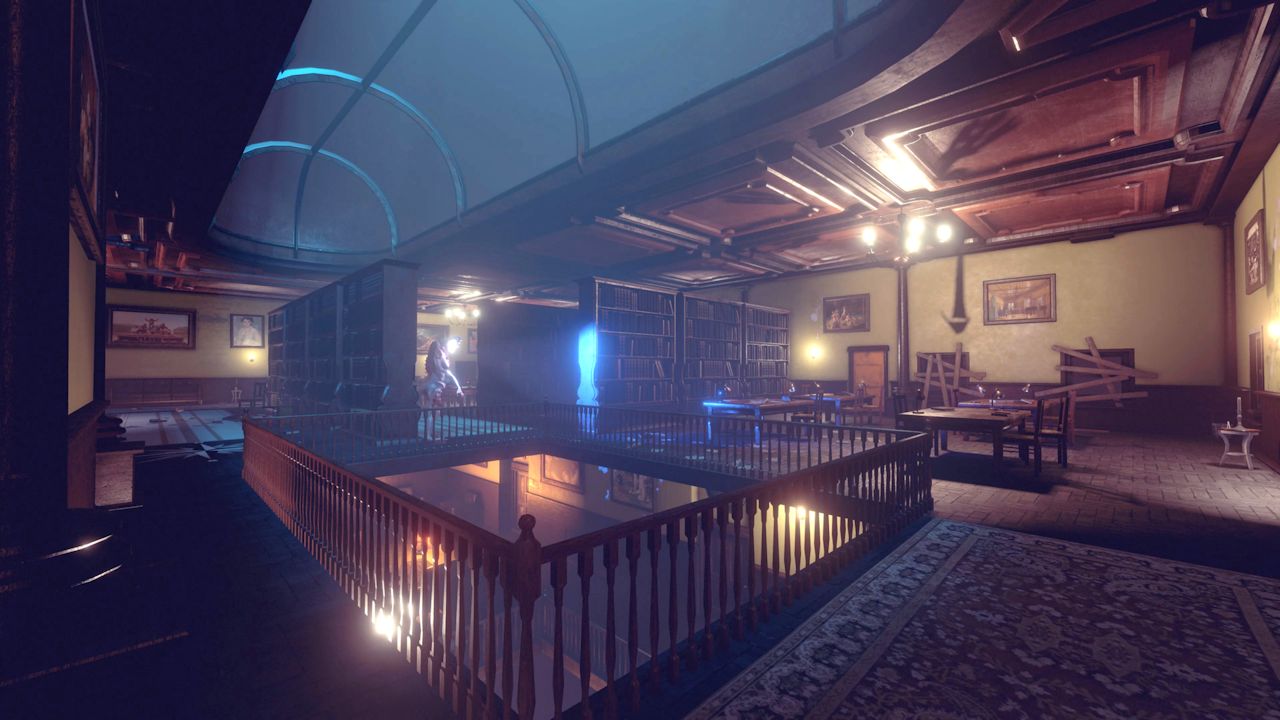 After you have made your way through what is about a six hour adventure, you will be presented with one of three different endings, the Good, the Bad, and the Nightmare. Each of these is entirely dependent on your choices mentioned above, between both the forgive or condemn scenarios or the letting certain people live or die. Even though there are the three different endings though, you likely won’t find yourself wanting to put yourself through the trouble of going back to earn the others after your first time playing.

Coming up with just the right mix of scares and interesting puzzle is the key to a great horror game, which is much easier said than done. While Those Who Remain is quite unnerving with the constant shadowy figures glaring at you throughout the game, the game struggles to elevate itself to the next level with a lack of memorable puzzles and a boring protagonist that likely won’t bring you back for subsequent playthroughs.

Although it had some good ideas at the start, Those Who Remain feels like the most cookie cutter horror game possible that barely manages to present anything fresh enough to keep you interested across the six hour playtime.

Those Who Remain
"meh"