The latest news in the world of video games at Attack of the Fanboy
August 21st, 2017 by Lewis White 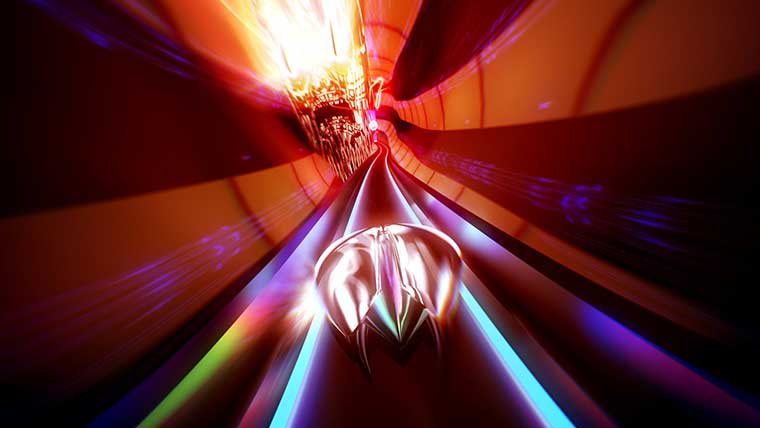 Thumper is the most exhilarating and terrifying rollercoaster you will ever ride. It doesn’t do full loops; it doesn’t dive downwards for hundreds of metres; it doesn’t ride so close to an oncoming carriage that you think you’re going to crash, burn and die; but it will scare the shit out of you and howl at your failures as you attempt to conquer its nine hellish levels over and over again.

Thumper’s tracks are remarkably linear, but the rhythm-action game turned eldritch scare-fest is more engaging and exhilarating than any real-life rollercoaster I’ve ever ridden. Stuck to the tracks and unable to escape, your only hope is to keep your hands firmly on your controller and do exactly as the game wants you to do. It won’t hold your hand; in fact, once Thumper’s barely helpful tutorials are done you’ll have nothing but your memory and your reactions to help you through the nine circles of rhythmic Hell. It’s grossly intimidating and it may make you feel uncomfortable at times, but if any game was worth pushing through a strong initial barrier to entry, it’s this one. 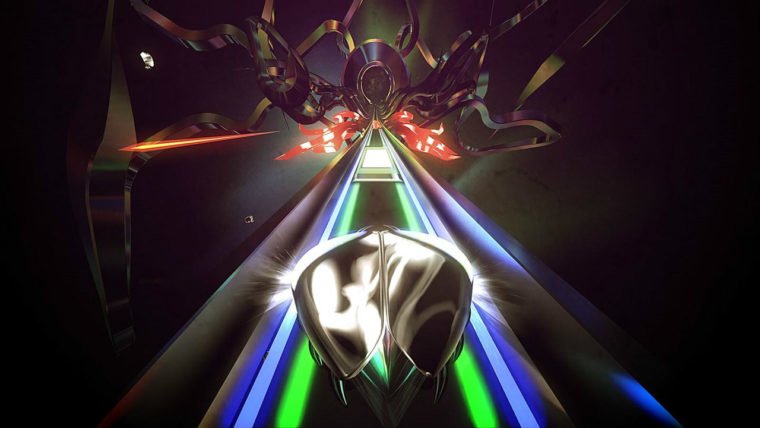 As you drift, thump and fly through Thumper’s nine chapters, you’ll be met with intense, dramatic music full of deep bass and terrifying acoustics. The game is designed as simply as the classic game of Simon Says, with the background music playing a small melody which you will have to repeat with the game’s mechanics, every step laid out in front of you just seconds before it’s your time to follow. Failing to do so can be brutal; Thumper is a forgiving game but imperfections are met with harsh impacts and the crushing of your metallic beetle avatar’s outer shell combined with a ferocious blare of noise and a deep red hue filling the screen. When you mess up in Thumper you know that you messed up, and you know it was your fault.

Thumper is still a fantastic and frightening game that’s drenched in atmosphere and polished to the absolute max.

As you get deeper into the game’s otherworldly locales, more and more mechanics will throw themselves at you. Your memory and your reflexes will have to be in top shape as you battle track after track, each song blending into one another as they get faster, brutal and more intimidating. Every small moment in Thumper is designed to the T; you may mess up over and over again, but you’ll learn…eventually. Everything matches perfectly to the music and on repeated attempts you’ll find yourself mimicking the songs with your mouth as you remember every small beat you need to move through.

While the game may be difficult and most definitely brutal, Thumper is one hundred percent fair. No beat is out of place, checkpoints are easily restarted from a quick hit on the left bumper and, upon death, levels start again instantaneously. Drool’s design of this weird and alien feeling world has been perfected—nothing feels out of place no matter how out of place you feel as you glide smoothly along the dark, neon tracks of this preternatural alien theme park ride. 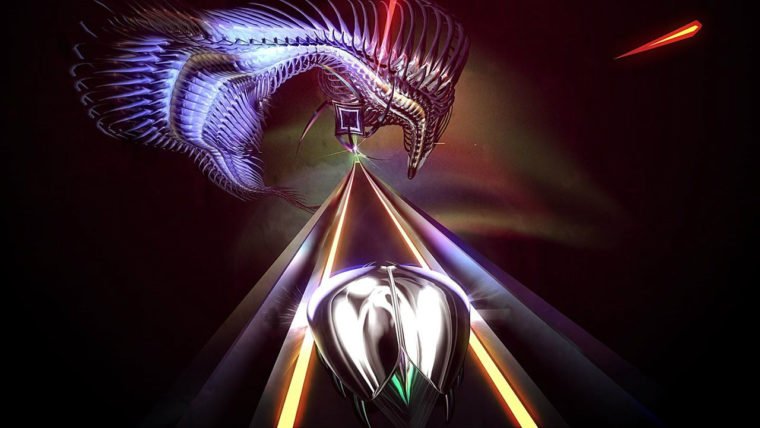 Even when you think you’ve just gotten the hang of it, when you finally feel confident moving throughout the world, conquering bosses from the flaming, screaming head to the floating, metallic shapes—Thumper will chew you up, spit you out and throw you into a loop of death. When you finally master holding ‘A’ and a direction at the perfect time to speed around the game’s breakneck corners, the game throws blue rings and spike pits at you which you’ll have to fly over. When you master that, Thumper throws shielded bosses at you which are only defeat able once you fire a pulse-like shockwave at them. Then you’ll have to deal with multiple lanes, then laser sentries; the more you play, the more relentless Thumper becomes and the more in love with it you’ll fall.

Thumper will chew you up, spit you out and throw you into a loop of death

All of this is combined with a fair and addicting ranking system which—on your initial playthrough—will go up to a shiny golden ‘S’. Most chapters early on are simple and once you get used to the intense speeds and lightning-quick reaction times you’ll blitz through the first couple of levels, learning the aforementioned mechanics as you go on. As you go deeper and deeper, it gets faster and unabating. You’ll have to chain together numerous mechanics, your eyes glued to the screen as your fingers dance along with the music—Thumper is the most engaging rhythm-action game I’ve ever played. 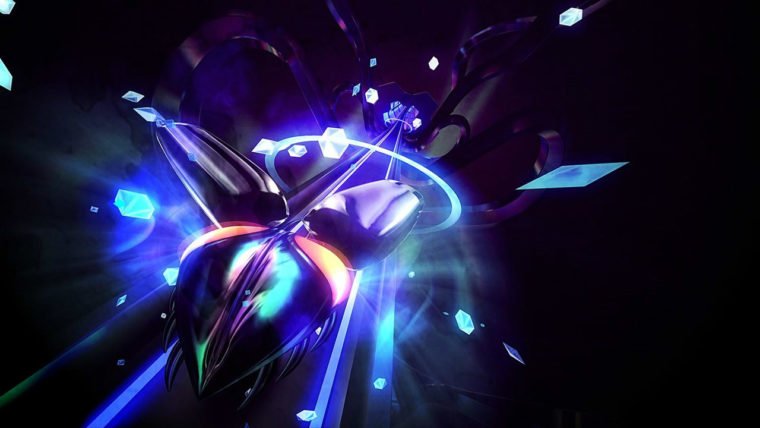 That’s not to say it’s a perfect run from start to finish; Thumper’s atmosphere and artistic theming may captivate and engage you but they don’t differ much from the game’s opening and closing acts, they just get larger, more intricate and increasingly horrific. There’s a lot of repetition, especially in the game’s first half, but when you’re learning new mechanics there’s at least a semblance of change, the game is evolving and becoming something new. As you dive close to the end of Thumper’s journey though, it’s only getting harder and harder, it has less of a hold on your attention.

As for the Xbox One version itself, it’s certainly a great way to play this enthralling nightmare of a game. It lacks the VR support of the PC and PS4 versions—which would be utterly terrifying—and misses out on the portability of the Nintendo Switch, but it does feature visuals more on par with the higher quality consoles compared to the flatter textures seen on the less powerful Switch hardware. Nevertheless, it’s still a fantastic port that renders the entirety of your blindingly fast adventure at a rock-solid 60 frames per second, a must have for a game as fast as this.

Thumper is the most hellish and intense rhythm-action game you or I will ever play. While it’s Xbox One port may lack some features available on other platforms—such as VR and portability—Thumper is still a fantastic and frightening game that’s drenched in atmosphere and polished to the absolute max.