The latest news in the world of video games at Attack of the Fanboy
November 2nd, 2014 by Kyle Hanson 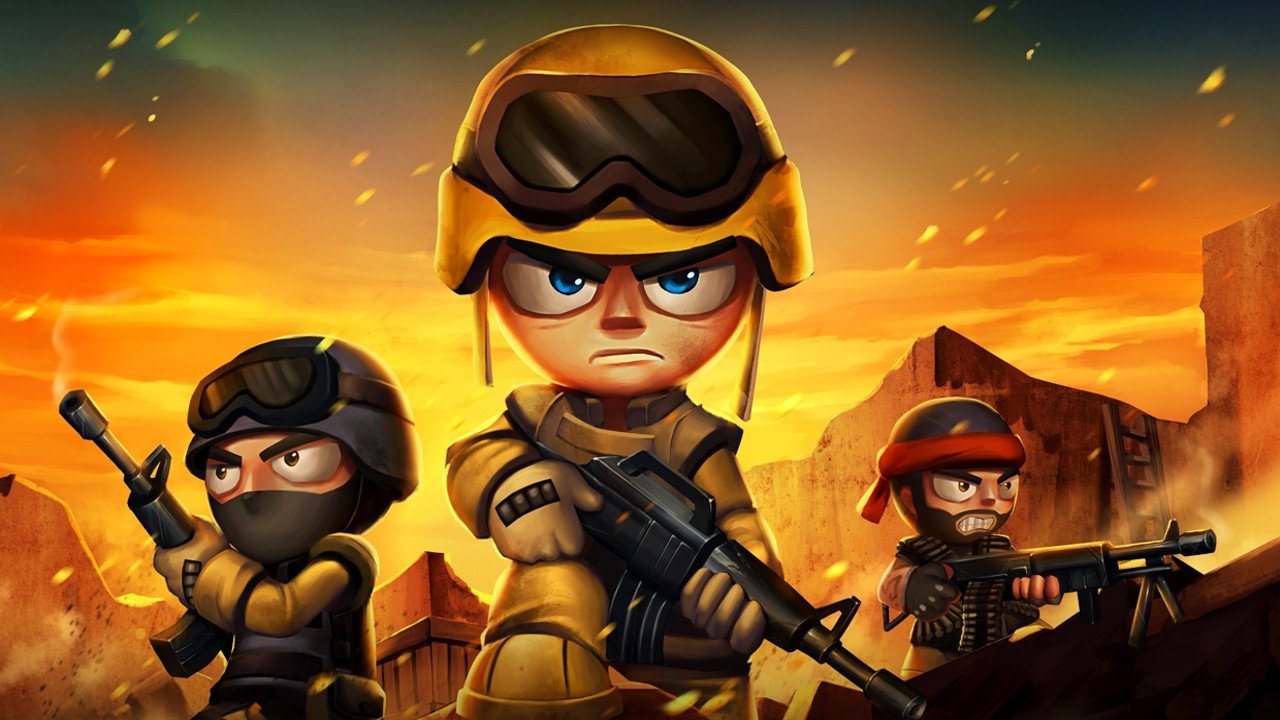 Tiny Troopers: Joint Ops brings together two mobile games in one package for PS3 and PS Vita. Taking Tiny Troopers 1 and Tiny Troopers 2: Special Ops off of their touch-enabled mobile platforms and placing them into the console realm as a single game. This sort of setup usually results in poor controls, and a lack of overall content due to the different expectations players have for a full console release. Tiny Troopers: Joint Ops tries very hard to overcome these hurdles, even including the very helpful cross-buy and cross-save functionality that will please PlayStation fans. Ultimately though, the final result isn’t really worth player’s attention unless they are yearning for some quick on-the-go action.

There is only the smallest semblance of a story buried in Tiny Troopers: Joint Ops. Two campaigns are available to play through, with each featuring short cutscenes before a new section begins. There are multiple attempts at humor, but these ultimately fall flat most of the time. Especially odd are the dramatic shifts in tone the game features on occasion. The cutesy art style and basic gameplay makes Tiny Troopers: Joint Ops feel like an all-ages affair. However, jokes about PTSD and random enemies writhing in pain on the ground made for a disjointed experience. It feels like the developer wasn’t willing to commit to a darkly humorous take on modern war, and instead stuck with the simplest method possible.

The gameplay of Tiny Troopers: Joint Ops follows this simplistic philosophy by featuring only the barest essentials of the twin-stick shooter genre. You control a troop of soldiers ranging from one to three units who are tasked with various missions as you progress through the two campaigns offered here. These missions usually only last between one and five minutes and can almost always be summed up with “go here, destroy/kill that”. This structure will dominate your time in the game, eventually causing every mission to blur together into one long stretch of tedium. Poorly designed levels don’t help in this area either, as you will find yourself wandering from objective to objective with little agency as far as how to tackle the next firefight. The worst part of this is when you accidentally miss a key element of the mission and have to backtrack, making it so you must slowly walk across empty areas until you check that final box, which then usually forces you to walk all the way back to make your escape. 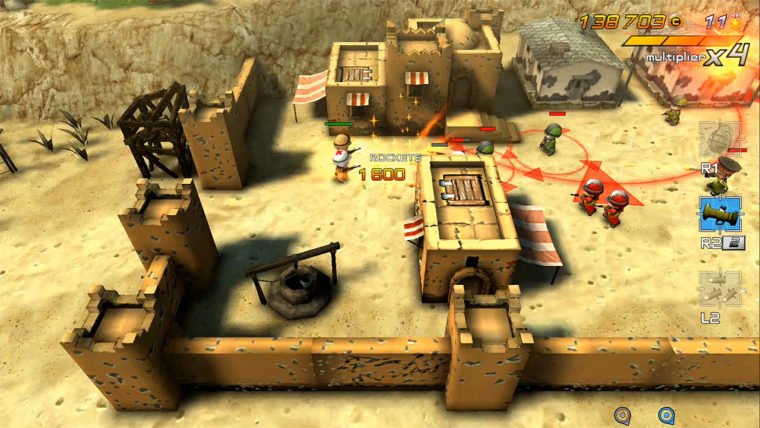 Other mission types are mixed in on random occasions such as vehicle sections, survival modes, and the depressingly familiar escort mission. Yes, the much maligned escort mission that gamers thought was long dead comes back in a big way in Tiny Troopers: Joint Ops. While the difficulty isn’t high enough to cause frustration, all the other hated elements are still there, such as slow NPCs who have little concern for their own well-being. There is also a zombie mode thrown in seemingly at random. It isn’t anything that reshapes the gameplay, but if you are looking for more variety then it offers a brief respite.

Luckily there are a few small choices that take this dull overall design and make it slightly enjoyable. The short levels ensure that no single mission sticks around long enough to truly disappoint, and making the game available on PS Vita means you can pop in to tackle a mission when you have a few minutes to spare. In these shorts bursts the game is likely much more enjoyable than sitting in front of your TV wondering why you are wasting time running around shooting the same enemies over and over. The Vita also allows you to go back to the original touch-screen enabled control scheme, something that is sorely missing from the PS3 version. On PS3 you will move with the left thumbstick and fire with the right. There is a lock-on mechanic, but it is not well implemented, resulting in an overall feeling of randomness. Targeting a specific enemy or item, such as an exploding barrel, is nearly impossible as the target will simply lock on to a random opponent in the area that you are pointing. This can have dire consequences in some areas as you will fire on the wrong enemy, or even blow up your own squad by accident if you aren’t totally careful.

When your team does die you can revive them using the rare medals that are found while on missions. If you don’t have enough medals to revive your unit then they are gone forever. Players will want to avoid this as completing missions with the same character will cause them to rank up, making them better suited for combat as the missions get harder. It is certainly an interesting mechanic and gives death a bit more weight than is usually present in these types of games. However, the difference between a high rank character and a new one wasn’t too significant to the point where a loss was truly impactful. One way this could have been improved would be to allow players to decide how many, and which troops to take into battle. This would have allowed for strategizing based around which characters were best suited to help out, and who the player was willing to risk on the more difficult missions. 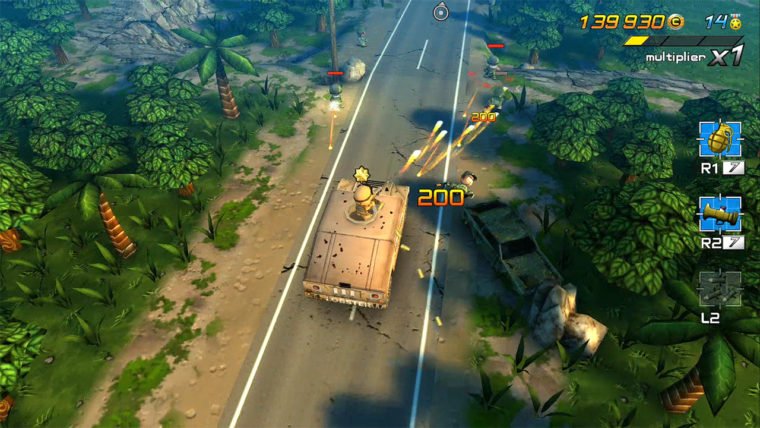 What does end up making a difference in the gameplay are the optional upgrades that players can purchase for their squad between missions. These will stick with your squad even if they are totally wiped out, and are all standard upgrades, such as extra health, better aim, and increased damage. There are also cosmetic changes that you can unlock, although the high cost will likely make it so players focus on the actual upgrades first. Along with this, players have the ability to unlock and recruit specialists for the next mission. This can help out if you are having trouble on a particularly difficult level. However, since the specialist will leave after the next mission is completed it feels like throwing your hard earned money away. It would have been better had the specialist stuck with your squad until they died, even if that meant they had to be weaker to keep the game balanced.

On paper Tiny Troopers: Joint Ops seems to offer quite a bit for players to enjoy. There are over 50 missions pieced together from two separate games. Cross-buy allows you to play on PS3 or PS Vita, with PS4 to come later on. And there is a plethora of cutomizable and unlockable features that help give you some more attachment to your squad. Unfortunately the underlying gameplay is a dull affair that gamers have seen many times before. Little is done to take the variety of options and extend it into the actual mission structure, causing the game to feel like one long stretch of the same thing. And the poorly designed levels make it so navigating the field of play is rarely an enjoyable experience by itself. There is little to compel most players to pick up Tiny Troopers: Joint Ops unless they really want a new dual-stick shooter to while away a few hours.