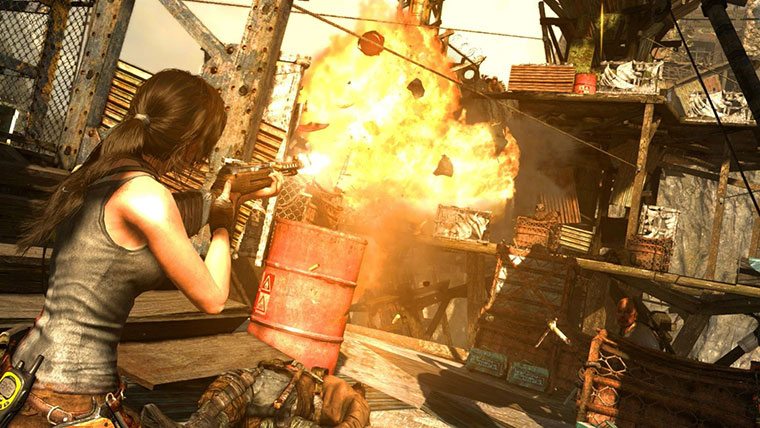 There wasn’t much to complain about with Crystal Dynamics 2013 release of Tomb Raider.  Even on the aging Xbox 360 and PlayStation 3 hardware, the game was one of the best looking titles of the generation.  Though compared to its PC release counterpart, you could definitely see the console versions had been held back significantly.  When Square Enix announced that they would be making a “Definitive Edition” of Tomb Raider for the Xbox One and PS4, I have to admit a little part of me was extremely skeptical.

I mean, full price for a game with marginally better graphics?  That’s not exactly what I had in mind when I looked forward to 2014.  Though playing Tomb Raider Definitive Edition, all that worry fades away.  Number one, Tomb Raider is a game that didn’t have many faults in the single player campaign to begin with.  Playing through it again isn’t exactly a chore. It’s a cinematic experience that’s beautiful on the Xbox One and PlayStation 4, and the enhancements that have been made to the game are almost entirely focused on the visual experience.  A number of different upgrades have been made to the game which allow you to become immersed in this beautiful adventure, far more than was possible with previous iterations.

It’s hard not to be skeptical of these repackaged releases.  Over the years, some of them have been good, some bad.   Because of those bad ones, it’s easy to view this Definitive Edition of Tomb Raider with some cynicism.  On one hand, there’s really much additional content to be found in this release.  If you played the game when it came out last year, you’re not in for a wholly different exprience.  Square Enix has packaged all of the available downloadable content that arrive post-release, but that’s certainly not the star of the show as almost all of it expands on the exceptionally middling multiplayer component.

The graphics will wow you if you’ve made the jump directly from the Xbox 360 or PlayStation 3.  Not so much if you’ve made a pit stop on the PC.  But even if you did, there has been some work put into the game that can’t be find on the PC release.  Crystal Dynamics has remodeled Lara Croft entirely.  She has a more realistic look about her, complete with more realistic modeling of her hair.  And for a game that was known for its beautiful vistas, lush environments, and big cinematic sequences, the upgrades will be noticed right away and boost the overall exprience through the entirety of the games campaign.

For those that didn’t play Tomb Raider last year, this is a truly next-gen experience for the franchise. This reboot is a combination of beautiful set piece moments, quick-time events, varied combat, and the traditional puzzles that Tomb Raider fans will find familiar. Tomb Raider is easiest to compare to a game like Uncharted 2 or 3 for its approach in delivering a cinematic experience from start to finish.

Though the real core of the gameplay is built around the combat system. The variety of weapons and their powerups and ways to use the environment make encounters play out in entirely different ways according to player decision. You can stealthily sneak up on enemies and dispatch them without anyone becoming the wiser, or you can take a more forward approach and come out guns,arrows,or pickaxe blazing. And while this Tomb Raider takes the game’s protangonist on an origins story of sorts, she quickly becomes grizzled combat veteran in short order. Though explored briefly at the game’s onset, Lara loses her vulnerability pretty quickly. It doesn’t take long before you feel like you have the upper-hand in nearly any encounter. Lara transitions from the hunted to the hunter pretty quickly, and your constantly growing list of weapons, ample ammunition caches and regenerating health continually reinforce this.

By and large the single player side of Tomb Raider is a game that shows off an incredible attention to detail in both the way that the story is told, and the way the player interacts and grows alongside it. As well known as Lara is, Crystal Dynamics does a good job of making you feel the transition of the character. It doesn’t hurt Tomb Raider’s case that it is also an incredible looking game with some unforgettable sequences. A dynamic camera makes for a heightened sense of danger, while also highlighting the beauty of the island when the story calls for it. Those who put presentation first will not be disappointed with Tomb Raider, but they also won’t be making sacrifices in the gameplay, story or length of the game either. It’s a well rounded experience that last upwards of 12-15 hours depending on play style, but there’s very little reason to return to island once complete. 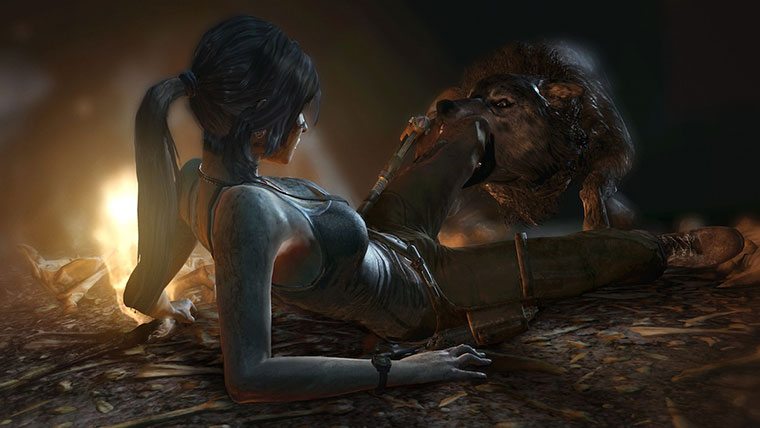 If there’s one glaring bad spot for the single player portion of Tomb Raider, it’s that there’s not enough side content. While you’ll find plenty of secrets to uncover on the island, there’s very little depth to any of it once you find it. There’s no reward outside of the XP boost you receive for clearing a tomb, and the puzzles that are usually encountered are clever but not overly complex. These side tombs usually consist of you travelling down a fairly linear path, solving a quick puzzle, and being on your way. It would have been nice to see more depth to these side excursions. With very little bearing on the actual storyline, this side content doesn’t round out the experience as fully as it probably could have.

Though as much as the single player of Tomb Raider is a spot-on hit in the gameplay department, it’s not so good as to warrant a multiplayer mode built completely around it. Obviously the intent is to keep the party going after finishing the story, but sometimes it’s just not necessary. Tomb Raider is one of those cases where its not. Taking control of a variety of characters from the single player portion of the game, Tomb Raider multiplayer opens the world up to a variety of modes to play. It’s pretty standard stuff, really. You’ve got your traditional deathmatch mode, and then three other modes which are slight variations of what you’ll find in just about every other multiplayer experience on the market. As is also expected, a rather standard weapons and skill buff upgrade system which is tied directly to a familiar XP unlocks system that is found in the single player side of the game. However, the XP from single player does not carry over to the online side of things, which is a weird decision considering that it could have given even more reason to explore the single player world more thoroughly.

So just because it seems pretty run-of-the-mill, does that mean there’s no fun to be had with Tomb Raider multiplayer? No, not exactly. This third person shooter offering definitely has some great moments and does some things well, but it’s pretty easy to tell that multiplayer wasn’t given the same amount of attention as single player. It strives to recreate some of the cinematic moments from the campaign, it just doesn’t do it well enough to keep you interested. Unfortunately, there’s a real lack of polish on this side of the game when compared to industry leaders. Tomb Raider multiplayer could be fun in small doses, but its not the kind of third person experience that’ll have players committing days of their lives to. It’s not even close to the third person powerhouse, Gears of War, and a closer comparison to a game like Uncharted 3 or The Last of Us has Tomb Raider paling in comparison. It’s really unfortunate that multiplayer is so uninspired in Tomb Raider. It could have given the game a lot more replay value after the single player fun had finished.

Crystal Dynamics rarely makes a misstep in the single player side of things, though. Tomb Raider is a fantastic solo adventure. Admittedly, I couldn’t help but wish my first experience with Tomb Raider was the Definitive One. The graphical upgrades are certainly welcome, but they don’t erase the fact that many have already been here and done that.  It’s a nice showpiece for what these next-gen consoles are capable of in terms of graphics, but if you come into Tomb Raider, this “Definitive Edition, thinking that it’s anything more than a shinier port, you’ll likely leave disappointed.