A delightful sequel that isn't as deep as its predecessor. 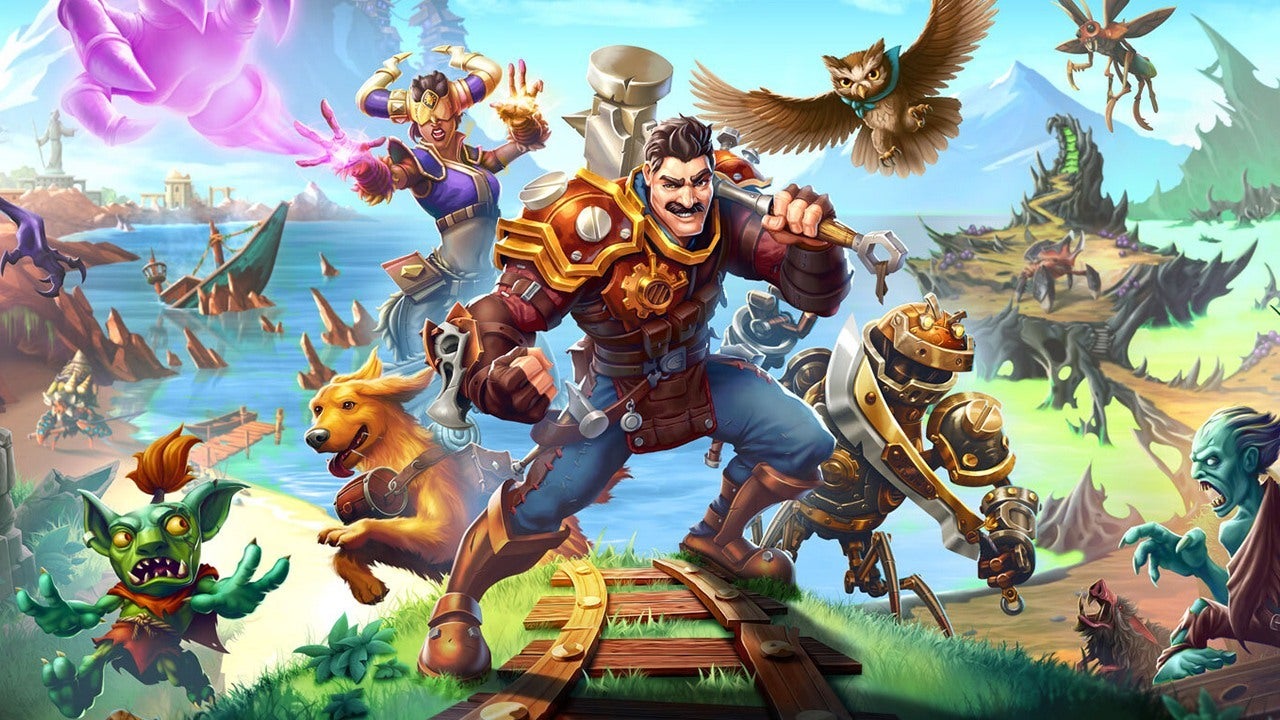 Torchlight III is a strange game. On the one hand it’s a delightful ARPG romp within a colorful world with fun skill and gear synergies to play with. On the other, well, it’s a bit too similar to its predecessor, which wasn’t exactly pushing boundaries back in 2012. Torchlight III is a good game in its own right, but it can’t quite escape from underneath Torchlight II’s shadow.

Torchlight III: third verse much like the first . . . and second.

Torchlight III didn’t start life as a direct sequel to Torchlight II, but as the long-planned MMO Echtra Game’s founder Max Schaefer has been trying to get off the ground since the first Torchlight. If you read that last sentence and had to pause for a second I understand: Runic Games – developers of the first Torchlight games – are no more, yet several former Runic and Blizzard North employees made the jump to Schafer’s newly minted Echtra Games. So, despite the new studio, Torchlight III was  developed by people who know the franchise well.

After a lengthy alpha in 2019, Schaefer announced Torchlight Frontiers (the MMO) would become Torchlight III. The game became more linear, all the microtransactions were scrapped, and the game went from a free-to-play title to a premium one. The dream of a massive open-world full of adventurers killing enemies together for mountains of loot died, and in its place rose a game that bears an uncanny resemblance to its forbearers.

I’ve enjoyed my time with Torchlight III, but I couldn’t quite shake a lingering sense of deja vu as I played it. There are substantial changes to be found here, so it’s not like Torchlight III is a direct clone of the previous games. Notable additions are the customizable player Forts, dedicated online multiplayer with a shared hub, and the Relics that offer up a choice of five different subclasses to utilize. But, I still couldn’t shake the feeling of having done all this before.

That sensation isn’t purely on Torchlight III. ARPGs haven’t evolved too dramatically since 2012, despite Grinding Gear Games’ Path of Exile having done quite a bit to shake things up. It’s still the same old isometric view with a bar full of skills and a whole lot of clicking. It doesn’t help affairs that ARPGs like Path of Exile are capable of melting the average gamer’s brain due to the sheer volume and density of systems within, so recent ARPGs have tried to find a middle-ground that offers up greater complexity than Diablo 3 without going as in-depth as Path.

Torchlight III comfortable sits in the middle of the pack in this regard. The four classes come with two skill trees of their own, and each can choose one of five relics that act as a subclass. That’s roughly 14 class skills and 10 relic skills for a grand total of 24 to play with per character, though the three tiers of unlocks for each does provide some additional variety. Mix in the ability to equip three legendary skills found on equipment looted in the field, pet skills (pets do make a return here), and the gear itself and you have a system that allows for some creative builds without drowning the player in an overabundance of options. 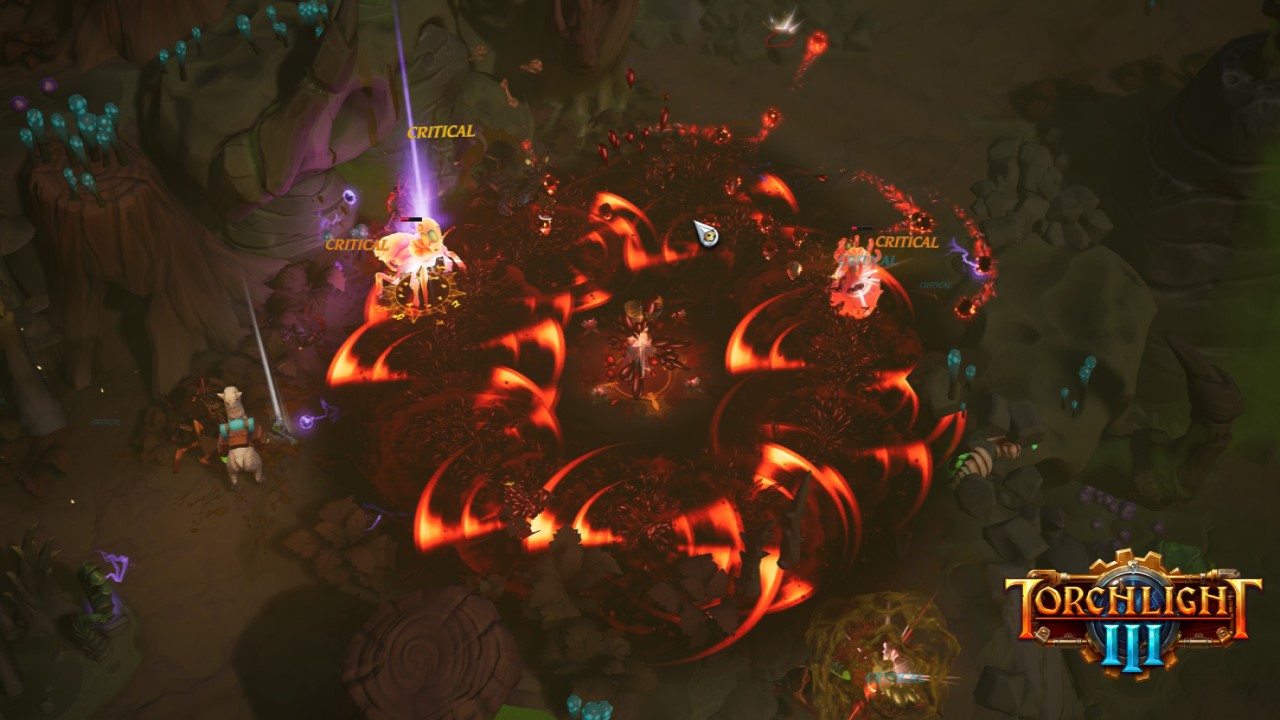 Thing is, Torchlight II was a deeper experience. There were more skills, more skill points, and more loot. The world of Torchlight III is also a series of linear zones pocked with linear dungeons, but Torchlight II had more variety, more instances, and more to explore. It’s clear Torchlight III didn’t begin life as a direct sequel, and while the game itself is objectively good, it’s hard to not compare it to Torchlight II.

That said, there is plenty to enjoy within Torchlight III. The game shares the same fantasy comic book aesthetic as its predecessors, but is sharper, more colorful, and better animated than Torchlight II. Attacks remain punchy, and the audio design lends each spell, shot, and explosive self-detonation the right amount of power and heft. It helps the game plays just as well on a controller as it does mouse and keyboard, meaning console players won’t feel less effective than their PC counterparts.

Class design is largely great as well. It can be argued that the classes in Torchlight II were better, but I found each class in III to be good fun to play. The Forged is a steampunk Johnny-5 that builds up heat that can be “vented” by select abilities for a potent boost to damage. The Dusk Mage alters between light and dark spells to conjure of an assortment of bonuses, while the Railmaker lays down rail tracks for their turret/pet/murder train to follow along. And the Sharpshooter . . . well, okay, the Sharpshooter is a little staid in comparison, using “ammo” (AKA, stamina) to power select abilities, but their class-exclusive pets can easily demolish hordes of enemies.

No one class is locked to a specific weapon or armor type, meaning players can toy around with whatever they so fancy. Relics do come with passives that bolster the basic attacks for certain weapon types, but there really isn’t anything saying you have to use a bow on a Sharpshooter. Torchlight III may not be the deepest ARPG out there, but it provides just enough depth and nuance to create some healthy build variety.

The customizable player fort is also a great addition to the game. Easy enough to ignore if you so choose, but robust enough for players that obsess over housing in other games, the fort is a persistent personal zone that stretches across your entire account. You can rally up with friends there, grab limited buffs from your friends’ monuments, or even stumble upon a stranger’s fort in the wilds of Torchlight III. The pseudo-battle pass Contracts provide a wide variety of additional cosmetics, which provides another pursuit for players to chase outside of loot. 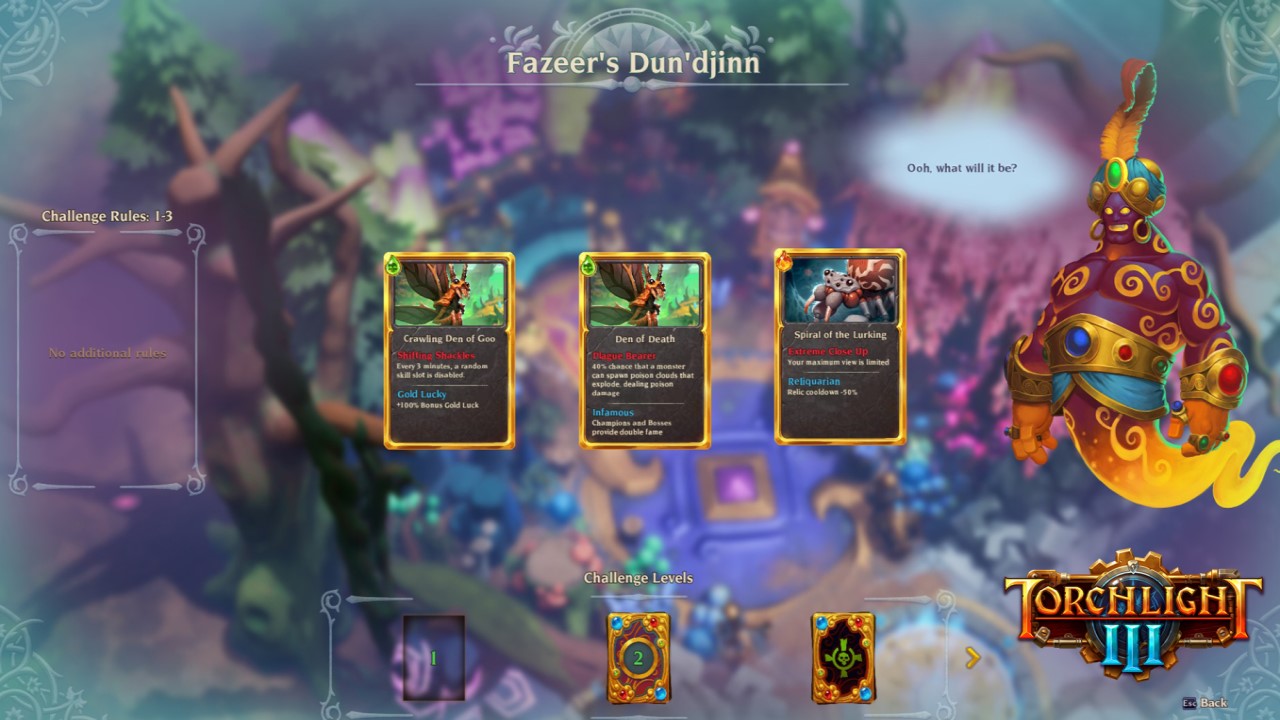 Then there’s the endgame, “Fazeer’s Dun’djinn” (yes, that pun is terrible, but I lowkey love it). It’s not the most cosmic thing we’ve seen in an ARPG, but it serves its purpose well: provide an endless, escalating set of procedural dungeons to grind out better gear within. Fazeer will start each run by dealing you a set of cards, and you get to choose the type of monsters, elements, and modifiers within. From there you venture within and clear out quests for Contracts experience, which also include powerful legendary items alongside the fort cosmetics. Matchmaking is also baked into Fazeer’s Dun’djinn, so you can easily find a party.

Which is yet another one of Torchlight III’s strengths: the multiplayer works well, and online play is mercifully divorced from offline. That does mean you can’t take your single-player character over to multiplayer, and vice-versa, but at least you can play Torchlight III if you don’t have access to the internet. Joining up with your friends is simple enough, and you can teleport to party members at any time from anywhere. Also, the hub of Trevail Point acts like the Tower from Destiny 2, or any other online social hub for that matter. When you are online in multiplayer you will see an assortment of other players running around, their level emblazoned with a shield that indicates what difficulty they are on.

Oh, I guess that’s one more thing Torchlight III gets right: difficulty isn’t about making enemies into bullet sponges. They’ll hit hard and move faster, but it never feels like you are throwing yourself at impenetrable brick walls. You can get one-shot, but I’ll take deadlier enemies over impervious meat shields any day of the week.

If there is one noticeable flaw with the game it’s with performance. In single-player the game runs fantastically on PC (I comfortably sat at my monitor’s 165hz refresh-rate at the highest settings at 2K with a 1080 Ti and i7-8700k), but enter multiplayer and you’ll find yourself dealing with occasional lag and hitches. I never once died to these issues, but they are there nonetheless. Playable, yet noticeable. Some players have also reported frequent crashing, but I never crashed once during my time with the game. Take that as you will, because I could have merely been one of the fortunate few.

The lack of cross-play and cross-progression is also disappointing. For a game that leans as hard into cooperative play as Torchlight III, cross-play at least seemed like a no-brainer. Maybe it will arrive at some point in the future, but here at launch it’s an annoying omission. The Nintendo Switch version of the game is also not coming till later this year, so if you want to know how that port performs, well, we’ve got nothing to report yet. 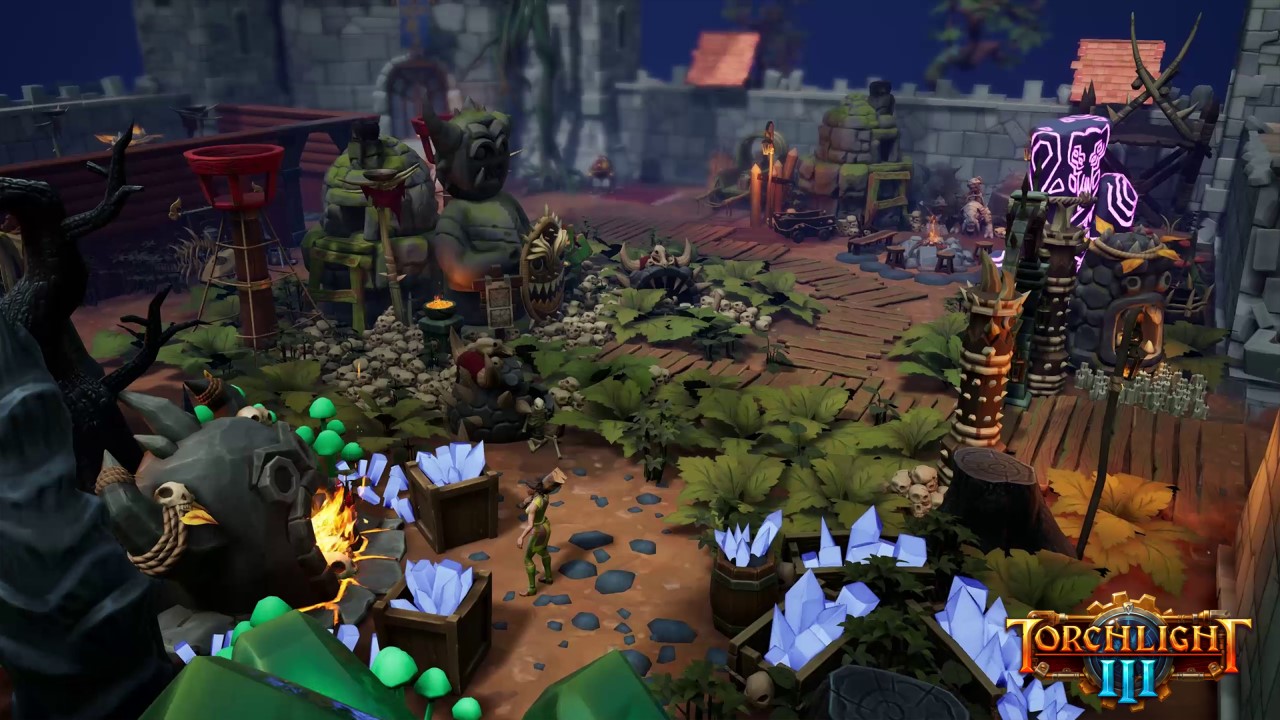 Despite all these good qualities Torchlight II remains a deeper, meatier ARPG than Torchlight III, and it’s a good $10 cheaper. Despite feeling much the same, there are many things Torchlight III does better, and it has enough new features to warrant playing it over its predecessor. But if you are a diehard ARPG nerd you likely own Torchlight II already, and there’s not enough different in III for me to recommend the transition.

If you are new to the Torchlight franchise then Torchlight III is an excellent jumping on point. It’s the ideal ARPG for those looking for something a little more casual, but with greater depth than Minecraft Dungeons and other similar simplified ARPGs. And, at $39.99 it’s a great binge game to play with friends while we all wait on the next-gen onslaught that’s just around the corner. But, if you’re a hardcore ARPG fan looking for something deeper then you may be better served elsewhere, namely by Torchlight II.