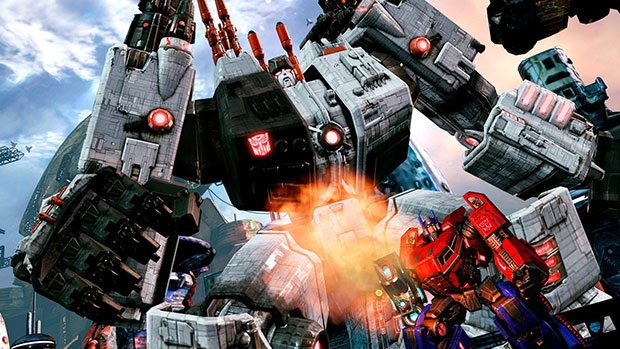 Despite a return to pop culture some years back with the re-introduction of the Transformers franchise on the big screen, gamers only got the usual.  We got a few remarkably bad attempts at cashing in on the movies with the traditional low quality movie game tie-ins.  Then something happened.  Activision tapped High Moon Studios to take over the Transformers franchise, and they showed promise with 2010’s War for Cybertron.  The game chronicles the events prior to when the Transformers arrive on Earth, where the Autobots and Decepticons are embroiled in a bitter civil war.

Two years have passed and High Moon Studios has recently released a sequel:  Transformers: Fall of Cybertron.  The game takes place following immediately behind the events of WoC, where the Transformer factions are still battling over the Energon.  This time however, the Autobots are attempting to flee the planet in their massive arc.  With their first game in the books, and plenty of praise for many parts of the first offering, it was up to High Moon to fine tune their Transformers experience, polishing the good and getting back to the drawing board on the bad.  Thankfully, they’ve done just that. 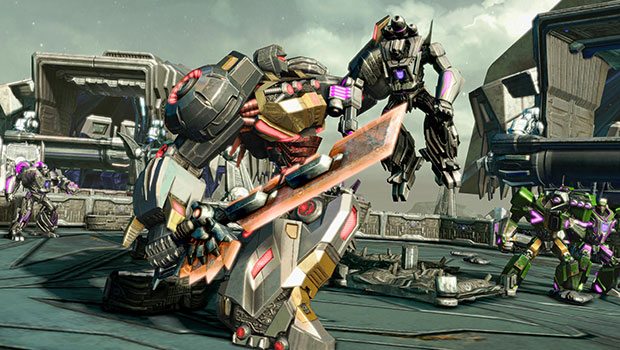 The Transformers are a diverse group of robots that all have different special abilities, and a game that could capture this has always held promise for fans of this intellectual property.  This isn’t something that was captured as well as it should have been in the past.  Focusing more on the shooting gallery aspect of the third person perspective, War for Cybertron got a bit long in the tooth in that department.  In FoC, High Moon spreads their wings a bit more, and showcases more varying types of gameplay, mixing it well with the third person shooting mechanic.  Along the Autobot and Decepticon themed campaign you’ll get to commandeer a variety of different Transformers.  You’ll control the likes of Optimus Prime, Megatron, Jazz, Starscream, Soundwave, Bruticus, Grimlock and others.  On a micro-level, each of these characters are a little less varied.  You’ll be able to pick up weapons for each Transformer that are the same for everyone, but each character has a special ability that differentiates themselves.  Characters are also differentiated by their different forms which allow them to transform into cars, tanks, planes, helicopters, dinosaurs, or even massive group assemblies.  Some transformations certainly work better than others, but some of the “driving” aspects of the game can feel somewhat sloppy, though its still incredibly cool to transform on the fly no matter what form you are taking.  While the game is not without it shooting gallery moments, the single player story builds to an incredible crescendo that offers a satisfying finale for the time investment spent on trekking through the game’s thirteen chapters.

For fans of War of Cybertron there is a bit of a let-down in the single player portion of the game. High Moon has scrapped the cooperative gameplay that was featured in their last game, and moved forward with refined versions of their competitive multiplayer and escalation (horde) gamemodes.  If you played the last game with a friend, you’ll likely be a little disappointed to see this functionality removed.  However, even without the cooperative play returning, Fall of Cybertron one-ups its predecessor in nearly every way.  Fall of Cyberton isn’t going to drop your jaw with graphics that you’ve never seen before, nor is it going to blow you away with new and unique gameplay ideas, but it does come together well enough that its hard to pick at for imperfections.  An excellent score and sound engineering play a big part in enveloping you in this world, that feels more alive because of the detailed environments that are prone to explode as you mash your way through it.  High Moon does a good job in making you feel powerful with each robot that you control, big or small.

Most surprising about Fall of Cybertron is High Moon’s obvious attention to multiplayer this time around.  Where War of Cybertron was by no means a bad game online, there were some balancing issues that can wreak havok in the online world.  In this rendition, gameplay feels more balanced and more fun because of this attention to detail.  A class based multiplayer suite rewards smart players for utilizing the abiltites that are available.   With an almost Team Fortress 2 like quality in the online multiplayer, the good teams balance their attacks with robots that can perform vital functions on the field of play.  From healing teammates to turret building,  there is a level of strategy in Fall of Cybertron that is required to get the most out of the mode.  Character customization is also more robust this time around.  You can build just about anything you can imagine through what parts you are given to choose from.  These include peices for your head,arms,legs, chest and many others.  Customizable weapons slots and abilities will allow you to step outside of the four set classes that are available by default, and further differentiate yourself from the stock bots.  Going even deeper into the customization options, weapons and abilities can also be enhanced by selecting upgrades that cater to your play style or team strategy.  If there’s a Transformer that you are looking to duplicate, you can likely do it in the enhanced editor.

Taking this creation into battle, there are four modes to choose from.  Three have returned from War for Cybertron, which include Capture the Flag, Conquest, and regular TDM.  A new mode called Head Hunter is very much like its Halo game mode by the same name.  What’s yet to be seen is the longevity of multiplayer in Transformers: Fall of Cybertron. A lot of great multiplayer experiences are nothing more than a flash in the pan, due to the highly competitive marketplace for this type of game.  It definitely has the structure to keep players entertained, and in the early weeks since release it is seems that the community is still going strong.  High Moon has already issued balance updates as well, and is getting ready to release its first bout of multiplayer DLC with a Dinobot pack next week.  Despite some issues with War for Cybertron it looks like a sincere effort in keeping the community strong going forward.

This sincerity carries into just about every facet of the game.  High Moon has definitely taken their criticism well, and has made a better game than 2010’s War for Cybertron because of it.  Whether you are a Transformers fan, or just a fan of wildly fun games, Transformers: Fall of Cybertron shouldn’t disappoint you.  For the Transformers fan, Fall of Cybertron is a celebration of the source material.  It hits on so many different levels that other games haven’t even attempted.  There’s an obvious love for the source material from the team at High Moon that shines brightly through the seedy world of licensed video game properties.  With such a big jump between their first and second offering, we can’t wait to see if there will be a third.