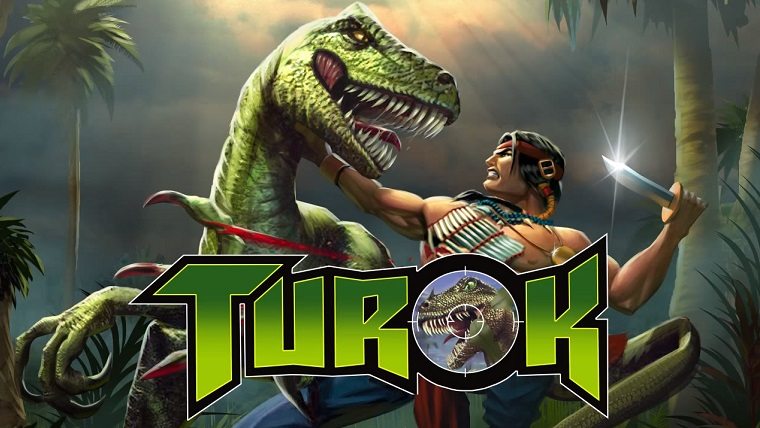 When the original Turok: Dinosaur Hunter released in 1997 for the Nintendo 64 and PC it quickly became a big hit and was praised for its graphics and how it evolved the FPS genre. Being the first third-party-developed game for the Nintendo 64 put a lot of pressure on it at the time, but the game met and surpassed the lofty expectations placed upon it. While most first-person shooters at the time followed a generally linear structure, Turok flipped the genre on its head by offering levels that were vast and featured multiple maze-like paths that put more emphasis on meticulous exploration. Now the game is nearing two decades on the market and Night Dive Studios has given it a remaster on PC, and while the game might not appeal to some newer FPS fans it has plenty to offer those craving the less-forgiving FPS experiences of the 90’s.

Seeing as this is essentially a game from 1997 with a shinier and more refined coat of paint on it, it’s to be expected that the way the game is designed is very different compared to the way games are today. There’s no exception to that rule with Turok, as the first-person shooting mechanics have no fancy aiming down sights options, cover systems, regenerating health or really anything that the average gamer will get in an FPS these days. Instead, we have a game that feels like many other games that released in the 90’s: tough. That’s a good thing, in my opinion, as games particularly in the FPS genre today have become so streamlined and easily-digestible that going back to a raw experience like Turok is a breath of fresh air.

This isn’t to say that Night Dive Studios just slapped the original game onto PC and called it a day, as that simply isn’t the case. The original experience is faithfully recreated here, but with tweaked and improved gameplay and level design, dynamic lighting, bloom, enhanced water effects, high resolution support and a lot more. This is, without question, the definitive way to play Turok: Dinosaur Hunter, regardless of whether or not you played the original back when it released. Just enough was done to give the game a modern shine, but at the same time they didn’t do so much as to alter what the original experience delivered. 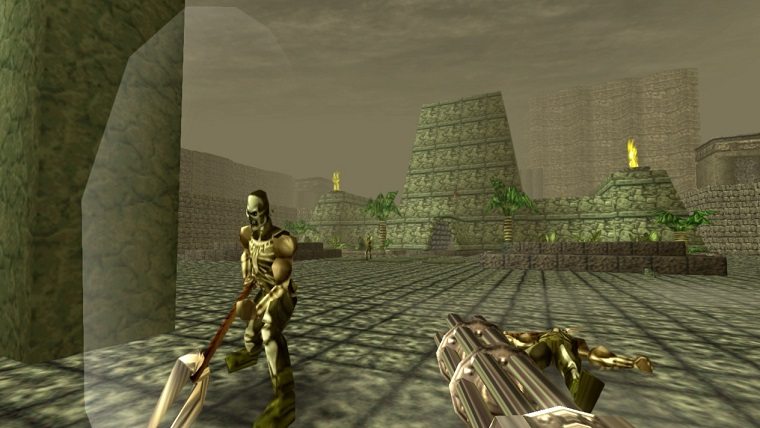 Turok: Dinosaur Hunter doesn’t do a whole lot to let you know what is going on, but it essentially boils down to this: A powerful warrior named Turok has to take on a seemingly endless army of beasts on his way to stopping someone called the Campaigner from creating a catastrophic weapon he’ll use to take over the universe. There’s no actual dialogue throughout any of the game’s levels to further this plot in any way, as instead the focus is entirely on you just trying to survive everything the game viciously throws at you. This consists of scouring each of the game’s secret-riddled levels for keys used to unlock the other levels in the game, while also searching for other hidden goodies like countless and varied weapons, armor and more. Each of the game’s levels also has a hidden piece of the powerful Chronoscepter for you to find, which allows you to wield its massive power at the end of the game should you find them all.

The thing that makes Turok really stand apart from other shooters of its time and even ones of today is that its biggest strength is the emphasis it places on exploration. Every jungle-themed level in the game has many different ways for you to go about progressing through it, with winding bridges, dark caves, underwater pathways, warp pads and portals leading to bonus zones for you to find. Even though the game definitely looks its age the level design is still very impressive, forcing you to really use your head to figure out how to get to a higher platform or how to unlock a barred pathway. It’s just fun getting dumped into these ominous levels filled with all kinds of dinosaurs, ogres, bugs and other savage beasts and trying to figure out how to get to the portal at the end in once piece. The game’s boss fights are also a real treat once you eventually stumble upon them, as they consist of bizarre things like giant bugs that hop around destroying chunks of the area and hunters that send armed Humvees after you.

It also doesn’t hurt that the soundtrack that serves as the backbone for all of this mayhem was fantastic back when it released and remains fantastic to this very day. Each level is backlit with a moody and atmospheric tribal beat that gives off a very sinister vibe, which makes wandering around these levels all the more engaging. Certain levels provide slower and more mellow tracks when wandering through narrow passages and caves, while others up the tempo to provide an exciting backing track for the bigger and more intense battles. Video games were very limited in terms of what could be done with audio back then, but it’s a testament to the developers to be able to come up with music so enthralling with so little to work with. 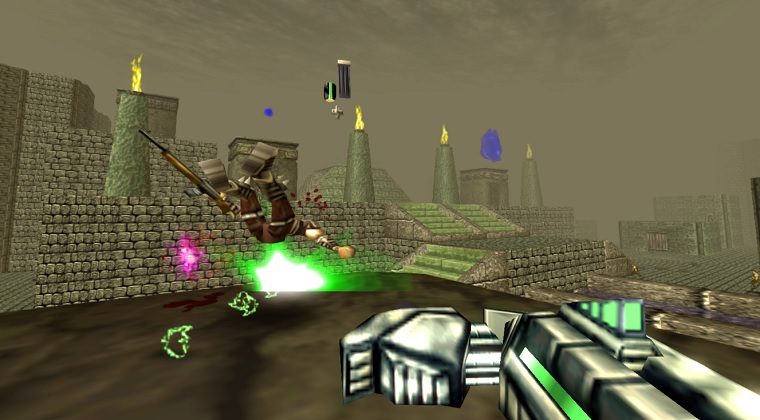 The game’s combat holds up really well, too, as the enemy variety is solid and is strengthened by the fact that the game completely showers you in a ton of sweet guns to choose from. While you start off with a knife and bow, you’ll eventually pick up shotguns with explosive shells, mini-guns and alien laser guns to take down your foes in style. What I like the most about this compared to shooters from this day and age is that there are guns for you to find that you could go the whole game without coming across if you’re not a scavenger. This really rewards those who are willing to absolutely scour the game’s terrain, as you’ll almost always end up with an awesome new weapon to show for it. The enemies themselves are challenging enough on their own and can be downright brutal in groups, requiring you to not take any battle lightly and make sure that your health and ammo supply are in shipshape.

Apart form the exploration and shooting there is also a fair bit of platforming in Turok that still works surprisingly well, though it isn’t always perfect. Often times you’ll be standing on the edge of a high cliff and look down at a ledge far below you that you need to land on to get to a new area, and making these jumps is always nerve-wracking and fun to pull off. There are sections where the platforming is pretty basic and monotonous, however, with seemingly endless rows of blocks to jump around on that isn’t all that fun to do. It’s also really aggravating when you fall off at the very end of one of these sections and have to do the whole thing over again, as even doing them once is quite enough in my book.

Speaking of having to do things over again, remember when I told you that this game was brutal? Well, I didn’t lie, as this game does not have an auto-save feature and instead has save points and checkpoints that are few and far between. This means that if you’ve been moving along your merry way and suddenly fall off a cliff to your demise or are jumped by a group of monsters that hand you your rear end on a platter, you’re gonna have to do a potentially significant amount of journeying all over again. The fact that the game’s levels are so non-linear and that the fog doesn’t allow you to get the best view of your surroundings also means that you’ll more than likely be making several trips through at least some of the levels to find all of the necessary keys in order to continue on. Some of this is acceptable as it’s all part of the game’s challenge, but I’d be lying if I said it didn’t get on my nerves every now and then. 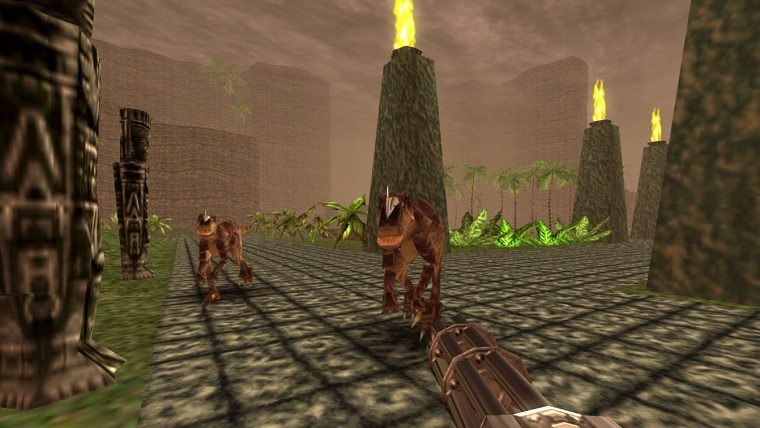 Despite the fact that Turok definitely doesn’t gel with the standards of first-person shooters today, it nonetheless serves as a great nostalgia trip with retro gameplay that is delightfully old-school. Just getting dropped into a foreboding area without being given any context and having to figure things out on your own is an experience that simply doesn’t exist in gaming today, and exploring the game’s expansive levels while coming into contact with hoards of increasingly viscous beasts is always a pleasure. If you want a good reason to take a trip back to the challenging 90’s FPS era, look no further than Night Dive Studios’ Turok: Dinosaur Hunter.