The latest news in the world of video games at Attack of the Fanboy
March 5th, 2018 by William Schwartz 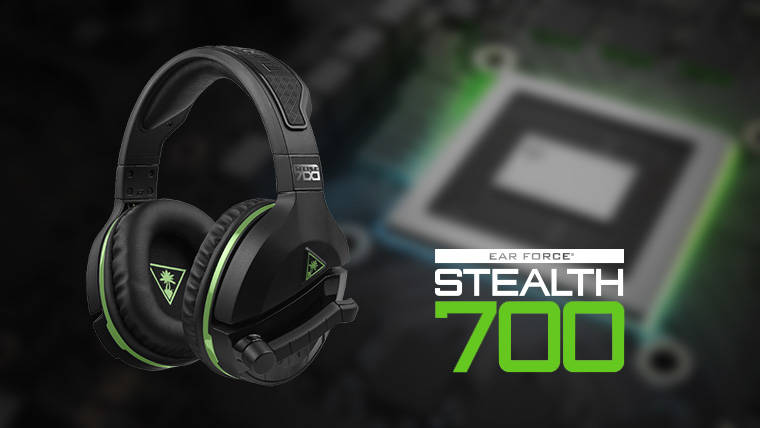 The Turtle Beach Ear Force Stealth 700 headset is the mid-range option for those looking for a fully wireless solution on the Xbox One.  If you checked out our recent review of the Stealth 600, the 700 is effectively that headset’s big brother.  If you’re in the market for either one of these headsets, and looking for the comparable differences between the two other than the bump in price I suggest you take a look at that review as well.  That aforementioned price increase comes with some additional luxuries.  One of the biggest additions in the jump up from the 600 is Bluetooth connectivity as well as some functions that come along with that technology, slight improvements to the quality of materials used in both the headband and ear cups for the headset, and noise cancellation technology.

Like the Stealth 600, connecting the Turtle Beach Stealth 700 headset out of the box is about as quick and painless as you can get for a headset that offers wireless chat functionality on the Xbox One.  Synchronizing the headset with the Xbox One is about as simple as connecting an Xbox One controller.  Once connected to the Xbox One  you have some options as to what features you want to enable on the console, like Windows Sonic Surround Sound or Dolby Atmos (requires purchase).  Out of the box, the headset does sound good on default settings, but you can further adjust features on the headset like Noise Cancellation and Super Human Hearing.  While the former is not included with the 600, the latter is.  These items can be accessed through direct interface on the headset itself. The sound tweaks that result from using either of these settings will be completely up to user preference and what type of game they’re playing or entertainment they’re consuming.  Further settings can be accessed via The Turtle Beach Audio Hub for either the Windows PC or Mac.

With the additional Bluetooth capability of this headset, it can connect to the Turtle Beach Audio Hub through a mobile device, which allows you to change these and other settings on the fly using your phone. Set-up for this was equally easy and you can do things like cycle through four different audio presets, enable chat boots, noise cancellation, Super Human Hearing, change microphone monitoring, or adjust the levels of the voice prompts and tones that the headset makes.  Unfortunately, to access a lot of these settings you do need to have either the mobile app installed or have the headset connected to the PC/Mac.

The Bluetooth functionality also allows for connection to any number of Bluetooth devices.  This could be your phone, your PC, or just about anything else that’ll pair with the device.  This functionality is extended by some smart additions to the headset which allow you to do things like take incoming calls, listen to music, and even control these devices through headset commands.  Using the Bluetooth functionality and commands with an iPhone, for example, allows you to access Siri, and make calls, or ask other questions.  It’s a neat functionality, though we found ourselves deactivating Bluetooth accidentally more often than not as all of the Bluetooth commands are tied to a single button that requires you do a combination of button presses and holds to perform them.

The Stealth 700 offers a comfort upgrade from the Stealth 600 due to the use of slightly better materials in the headband padding and ear cups.  We found the synthetic leather wrapping to be slightly cooler for longer play sessions.  Adjustments can be made for different head sizes and the cups of the headset will swivel for comfort.  These materials and padding take a lot of the pressure off of your head, while retaining a nice snug fit.  For those that wear glasses, the Turtle Beach Stealth 700 also features a nice softer area in the ear cup where there’s a little more give in the material.  Like the 600, this is a nice feature for those that need it.  Overall, the jump up from the 600 to 700 in terms of comfort isn’t night and day, but using both there’s a clear bump in quality and overall comfort level in the pricier headset, especially in longer play sessions.

With the increase in price you might expect that the audio quality of the Stealth 700 would be far superior to the Stealth 600 and we didn’t really find this to be the case at all.  Other than the different materials, using identical settings it was very hard to tell the difference between the two headsets in terms of sound quality. Both headsets feature the same four EQ presets and Super Human Sound feature and they were very similar in terms of performance.  Where the 700 did have a leg up on the 600 was in the ability to use active noise cancellation.  While these settings are easy to cycle through and use on the headset by using the companion app for the device, using them on the headset itself leaves something to be desired.  Like the 600, the 700 uses a series of tones that tell you whether a setting is on or off, and some of the EQ settings aren’t even available unless you’re using the companion app or program.

The range on the Stealth 700 is probably good enough for just about every gaming set-up.  Whether you’re sitting close to, or far away from your Xbox One, the sound quality stays consistent.  In range testing the headset we found that we had to get quite far away from the Xbox One/Controller to start experiencing any break-up in quality for either the game audio or chat audio.  Since we tested the 600 and 700 side by side, the pricier 700 did not give users additional range to move around.  Regardless, the headset does what it says in terms of being a truly wireless solution for the Xbox One in terms of both voice chat and game audio.  Having used a wired solution for quite some time, the wireless aspect of the device is simple, effective, and liberating.

Chat clarity of the Stealth 700 was equally great on the Xbox One.  Our chat was described as crisp and clear by those testing the device with us, and the settings available to the user are such that finding the right pitch between audio and game chat was quite easy.  Even when we wanted to quickly raise the voice of others to prioritize over game audio, it was easy to do so using the dials on the side of the headset, and even quicker on the mobile app.  Like the 600 the 700 features a fold out microphone.  Which can be used to quickly mute your audio, or just be put away if not using the headset for chat functions.

Like the Stealth 600, the Stealth 700 is largely comprised of plastic parts.  The headset feels durable, a device that can be dropped or mishandled without much damage being done to it.  We’ve seen it in other Turtle Beach headsets in the past though, this type of plastic always seems to wear in the parts of it that sustain the most pressure from regular use.  While we didn’t experience it in this review as our playtime was only around 40-50 hours, once you’ve had this headset for a few years or so we could imagine a scenario where it starts to wear or even break. While it’s very similar to the Stealth 600 there are some upgrades on the 700 that are worth mentioning again.  The higher quality fabrics used for the cups and headband are welcome.  The buttons on the device used to toggle settings are a little softer and easier to recognize than the cheaper model.  Though almost everything else is the same, from the flip out microphone to the other toggles and buttons, almost all of it was carried over from the Stealth 600’s design.  You will see some minor differences in the two products, however.  The Stealth 700 features a bit more branding  over the ear cups and some very slight design differences across the device.  It does give the illusion of a higher quality headset with a little less of a plastic feel than the 600, but these differences were marginal and didn’t seem like functional changes that would either extend the life of the device or improve comfort as both felt similar on the head.  While it’s not a huge price jump between the two headsets, you’d like to see some bigger improvements to device in this aspect.

The Turtle Beach Stealth 700 is a solid headset that packs a lot of features into a package with a historically low price point.  It’s an ideal headset solution for anyone that owns an Xbox One and wants to have some connectivity to other devices.